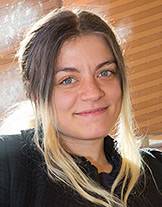 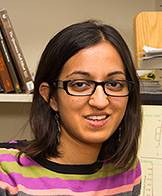 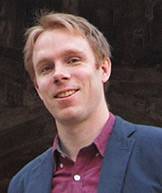 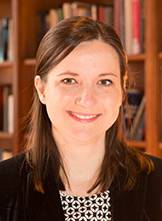 Cristina Domnisoru, Sonika Johri, James Pickett and Emily Vasiliauskas have been named co-winners of the Porter Ogden Jacobus Fellowship, Princeton University's top honor for graduate students. The fellowships support the final year of study at Princeton and are awarded to students whose work has exhibited the highest scholarly excellence.

The Jacobus Fellows will be honored at Alumni Day ceremonies Saturday, Feb. 22, at Jadwin Gymnasium.

Domnisoru, a doctoral student in the Program in Neuroscience who came to Princeton in 2009, earned undergraduate degrees in electrical engineering and computer science and mathematics, with a minor in neuroscience from the Massachusetts Institute of Technology.

Domnisoru's dissertation, "Cellular and circuit mechanisms of neural computation in the medial entorhinal cortex," has wide-ranging applications. "This research is important because developing a better understanding of neural circuits promises to have a long-term impact on human health and society," she said. "Gaining a mechanistic understanding of brains will provide the foundation necessary for designing principled therapies for human neurodegenerative and neuropsychiatric diseases such as Alzheimer's, schizophrenia, depression and drug addiction."

Her adviser, David Tank, the Henry L. Hillman Professor in Molecular Biology and co-director of the Princeton Neuroscience Institute, said: "I ordinarily would not assign such a difficult project to a graduate student, but Cristina volunteered to confront the challenge and her progress has greatly succeeded my expectations. Cristina is in the process of producing a thesis of incredibly high impact in science."

Domnisoru hopes one day to lead a neuroscience research laboratory. "The goal is to help develop the technologies required to understand neural circuits as well as we currently understand electronic circuits, like those in computers and smartphones," she said.

Johri, a Ph.D. candidate in the Department of Electrical Engineering, holds her B.Tech. in engineering physics from the Indian Institute of Technology in Delhi. She joined Princeton's graduate program in 2009.

In her dissertation, "Disordered and Correlated Electronic Systems," Johri reports results from simulations of two-dimensional electron gases — observed in semiconductor heterostructures and graphene — in strong magnetic fields, with the aim of realizing a topological quantum computer. She is also investigating fundamental problems in disorder physics.

Her adviser, Ravindra Bhatt, a professor of electrical engineering, said Johri "has displayed rather unusual outbursts of creative work in her research, which have led her to make substantive contributions in three distinct areas of condensed-matter physics. Her research trajectory is climbing faster, and her productivity in the past year has been the highest I've seen from graduate students in her subject."

Johri plans to pursue a career in academia. "After I graduate, I intend to continue employing the skills I have acquired at Princeton, namely, an arsenal of numerical techniques, theoretical knowledge and physical intuition about condensed-matter systems," she said. "In the near future, this makes it likely that I will work in a postdoctoral capacity with a condensed-matter research group."

Pickett, a doctoral student in the Department of History since 2009, received his bachelor's degree in international relations from Carleton College and master's degree in global, international and comparative history from Georgetown University.

Pickett's dissertation, "The Persianate Sphere During the Age of Empires: Islamic Scholars and Networks of Exchange in Central Asia 1747-1917," focuses on the Islamic scholars who leveraged their learned status obtained in Islamic colleges to secure positions of influence both north and south of the Oxus River, particularly in the khanates, or territories, of Bukhara and Khoqand and the kingdom of Afghanistan. The dissertation employs British and Russian colonial sources as well as indigenous Persian- and Arabic-language manuscripts from Tajikistan, India, Russia and Uzbekistan.

Pointing to his career, Pickett said his aspirations are straightforward: "to obtain a tenure-track professorship in history with a preference for a position at a research university, with an emphasis on research and where I could mentor graduate students." He also may consider options in government, think tanks and the private sector, he said, because "a practically and academically grounded understanding of Russia, Central and South Asia, as well as Islam more generally, is now more pertinent to policy decisions than ever."

His adviser, Stephen Kotkin, the John P. Birkelund '52 Professor in History and International Affairs and acting director of the Princeton Institute for International and Regional Studies, said, "Brilliant yet unassuming, analytically bold yet unduly scrupulous with evidence, (Pickett) is on his way to revolutionizing the field of modern Central Asian studies by means of a capacious, strikingly original Ph.D. dissertation that joins Russian-Eurasian, Iranian, Afghan and Islamic history."

Vasiliauskas, a Ph.D. candidate in the Department of English, earned her bachelor's degree from Harvard University and has two master's degrees, one from the University of Cambridge and the other from the Warburg Institute at the University of London. She joined Princeton's graduate program in 2009.

Vasiliauskas' adviser, Nigel Smith, the William and Annie S. Paton Foundation Professor of Ancient and Modern Literature and professor of English, said Vasiliauskas is "one of a new breed of highly accomplished Medieval-Renaissance scholars in literary study, confidently moving in both directions across a divide that has usually proved impassable to scholars hitherto."

Vasiliauskas' dissertation chronicles the invention of the literary afterlife in the early decades of the 17th century in England. Said Vasiliauskas: "My dissertation integrates several approaches to literature that have generally been kept separate. I combine, first, a study of three major authors with an account of a bookseller whose remarkable career has been overlooked and, second, a contribution to the history of the book with a more theoretical examination of the temporality of style. This last aspect of the project involves consequences for all historically informed literary criticism."

After graduate school, Vasiliauskas said she hopes to secure a position as a scholar and teacher of English Renaissance literature at a research university "to continue exploring the neglected aspects of this form of pluralism."