Princeton University recognized the winners of the highest honors it awards to students at Alumni Day ceremonies Saturday, Feb. 21. 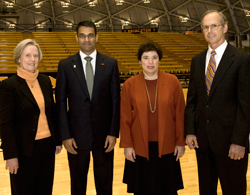 Also honored at the luncheon were winners of the top honors for alumni. Pictured here with Tilghman (left) and Russel (right) are: Rajiv Vinnakota, a 1993 alumnus who received the Woodrow Wilson Award; and Claire Max, a 1972 graduate alumna who was this year's James Madison Medalist. (Photo: Denise Applewhite)

The previously announced winners of the top honors for alumni also were honored at the luncheon: Claire Max, a professor of astronomy and astrophysics at the University of California-Santa Cruz, who earned a Ph.D. in astrophysical sciences from Princeton in 1972 and was this year's James Madison Medalist; and 1993 graduate Rajiv Vinnakota, co-founder of the SEED School of Washington, D.C., the nation's first urban public boarding school for disadvantaged students, who was this year's Woodrow Wilson Award winner.

Barnard, who is from Flagstaff, Ariz., is majoring in sociology. In December, he was named the recipient of the 2009 Daniel M. Sachs Class of 1960 Graduating Scholarship. He will use it to pursue a master's degree in development studies at Worcester College at the University of Oxford.

Barnard has done extensive research on social activist movements and has been an activist himself. He is a co-founder and vice president of the Princeton Animal Welfare Society, which promotes veganism and creates awareness about the treatment of animals. He also has been a member of the Princeton Coalition Against Capital Punishment and the Latin American Legal Defense and Education Fund, which helps immigrants.

For the last two years, Barnard has focused his academic research on the "freegan" movement, which promotes efforts to live outside the conventional economy by limiting the consumption of resources. Instead of buying goods, participants procure much of what they need by making items, searching for discarded goods or getting them from communities existing outside of capitalism. Barnard has done more than 200 hours of direct observation fieldwork and has interviewed 15 to 20 highly involved freegans for his senior thesis titled "Pulling Sustainability From the Dumpster: Environmental Ethics, Animal Practices and the Individuals Behind the Freegan Movement."

"His thesis makes a significant contribution to the exploding field of environmental sociology by concretely linking the global animal commodity chain to local consumption practices," said Mitchell Duneier, a professor of sociology, who is Barnard's thesis adviser. "His arduous ethnographic fieldwork illuminates how everyday individual choices about what we eat and throw away are inherently political."

Barnard has been captain of Princeton's mock trial team and has twice received the Shapiro Prize for Academic Excellence. Also a musician, Barnard plays the trumpet and bass guitar, and has served as president and drillmaster of the Princeton University Band.

In recognizing Barnard at the Alumni Day ceremony, Princeton President Shirley M. Tilghman said, "While he does not hesitate to express his views both inside and outside the classroom, it is always in a way that elevates the conversation and leaves no stone -- or, rather, idea -- unturned. As his stellar transcript testifies, he is as much a scholar as an activist, one whose quest for understanding in the service of social change will make him a force to be reckoned with wherever life leads him."

Chen, who is from Los Angeles, is majoring in sociology and pursuing a certificate in East Asian studies. He is writing a senior thesis that explores the impact of economic liberalization on China's urban population. His preparation included traveling to China to conduct interviews, participant observation and archival research. Titled "The Dragon Divided: An Ethnographic Study of Urban Inequalities in Shanghai," his project demonstrates that China's rapid modernization masks serious anxieties and inequities among its middle and lower classes.

Patricia Fernández-Kelly, a senior lecturer in sociology and his thesis adviser, said that during her 30 years as an educator she has "met less than a handful of students more talented, hard working or congenial than Andy Chen. As a freshman at Princeton he was intellectually ambitious. He took part in seminar discussions and often contributed valuable insights that set the tone for the collective exchange. … By the time he wrote his junior paper, it was sheer delight to see how much he had grown in poise and intellectual acuity. Every time I meet with Andy, I marvel at the way he has worked without respite to shape himself into an exceptional human being, a remarkable young scholar and a creative spirit."

Chen has dedicated a significant amount of time to extracurricular activities. As founder and manager of the Student Design Agency, he led a team of 25 designers who have produced more than 500 posters, websites and other graphic materials in the past three years. He also has been a proponent of civil and responsible public discourse, creating the designs for the Princeton-initiated "Own What You Think" campaign against anonymous character assassination allowed by certain websites.

In 2007, he received a Martin Dale Summer Award from Princeton to hone his skills as a yoga teacher in India. He created an online photojournal of his experience and has offered free classes on campus for the University community. He has served as student administrator/webmaster for the Student Volunteers Council and as publicity chair of the Taiwanese American Students Association.

Chen also has been a participant and publicity chair with the Princeton University Gospel Ensemble. In addition he has been a peer academic adviser and a lesbian/gay/bisexual/transgender peer educator. In 2008, he was one of eight students selected to receive Spirit of Princeton awards for their contributions and service to the University.

During the Alumni Day ceremony, Tilghman said, "Andy plans to develop his graphic skills, hitherto completely self-directed, at Yale this fall, laying the groundwork for a career that promises to do for the world what he has done so well for Princeton. Thank you, Andy, for giving visual expression to the things that matter most."

Bouk, a doctoral student in the Program in History of Science, earned his bachelor's degree with high honors in computational mathematics from Michigan State University. His research agenda on science in American life focuses on the intersection of three established fields: American history, environmental history and the history of science. His dissertation, "The Science of Life Insurance: Cultures of Science and Commerce in America," probes the pivotal role that science played in building the American life insurance industry and generating knowledge that has influenced understanding of everything from human mortality to racial discrimination to the character of America itself.

Daniel Rodgers, the Henry Charles Lea Professor of History and director of the Davis Center for Historical Studies, described Bouk's transition from mathematics to history. "His retooling was quiet, disciplined and dramatic," he said. "In workshops, in the Davis Center seminars and in job candidates' presentations, it is Dan whose questions will be the most acute and the most illuminating, the ones that stick in one's mind after the session is over."

Rodgers, who is Bouk's dissertation adviser, has called him "the intellectual leader of his graduate student cohort." Bouk served as president of the Graduate History Association from 2006 to 2008 and founded two forums for graduate students -- the Modern America Workshop's Graduate Works-in-Progress initiative and the Study Group for the History of Capitalism.

Crawforth, a Ph.D. candidate in English, came to Princeton as a Procter Visiting Fellow after earning two degrees -- in English and American literature -- at Christ's College at the University of Cambridge. Her dissertation, "'True Expounding': English Etymologies in Renaissance Poetry," is a pioneering exploration of the ways in which Elizabethan and Jacobean understandings of England's Anglo-Saxon linguistic heritage influenced the work of writers such as Edmund Spenser, Ben Jonson and John Milton.

Crawforth has been spending time in the United Kingdom, consulting the manuscript holdings of several libraries for her research. The book that is already beginning to emerge from her dissertation will, she said, "be the first work to consider the literary impact of the new interest in the history of native English words that arose as a result of the Reformation and the influence of continental humanism."

Nigel Smith, professor of English and one of her dissertation advisers, described the project as "an extremely important, field-changing account of the genesis of the poetry in which Shakespeare's generation wrote." Of Crawforth, he said, "She is a future academic of considerable importance, and her demonstrated diligence and acuity is most deserving."

Proteins are the principal molecular machines in all living systems. The ability to quantitatively analyze their expression levels is very challenging, since the entire complement of proteins produced by an organism is dynamic and changes from cell to cell. DiMaggio seeks to formulate and implement efficient algorithms for peptide and protein identification and quantification using tandem mass spectrometry data. Also, his work in optimal data clustering has important implications for the diagnosis and treatment of disease; he already has developed an algorithm that will enable scientists to target the molecules most likely to be effective in the synthesis of drug-related compounds.

Christodoulos Floudas, the Stephen C. Macaleer '63 Professor in Engineering and Applied Science, who is his dissertation adviser, described his "impeccable theoretical, analytical and computational ability, his great scientific maturity and persistence when attacking even an impossible problem, his naturally inquisitive and independent research mind and his amazing drive for perfection. Pete is clearly an extraordinary researcher with a great future lying ahead."

Lu, a Ph.D. candidate in applied and computational mathematics, earned a bachelor's degree in mathematics at Peking University in China. His dissertation, "Mathematical Analysis and Numerical Algorithms for Density Functional Theory," focuses on a popular framework for studying the electronic structure in fields including chemistry, material science and biology. His work sheds new light on a complex but powerful tool for analyzing the electronic structure of systems of large size.

His insights are so numerous and original that there are plans to turn his dissertation into a book -- something that seldom happens in the field of mathematics. Faculty members in the Program in Applied and Computational Mathematics have described Lu as more of a collaboration partner than a student.

"I have no doubt that with the completion of his thesis, Jianfeng will already have established himself as the leading expert in a promising area at the intersection of applied mathematics, material science and theoretical chemistry… ," said Weinan E, professor of mathematics and applied and computational mathematics, who is his dissertation adviser. "The future of our field depends on having students like him."