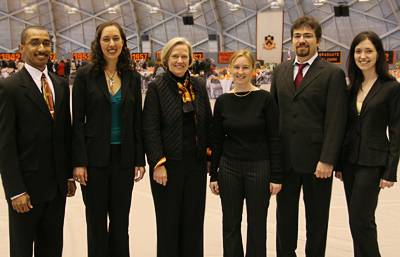 Princeton University recognized the winners of the highest honors it awards to students at Alumni Day ceremonies Saturday, Feb. 24.

Holland, who is from Amherst, Mass., is majoring in the Woodrow Wilson School of Public and International Affairs and pursuing a certificate in Latin American studies. She has excelled in her studies and has earned glowing tributes from her professors.

"Alisha is an extraordinary student," said Deborah Yashar, associate professor of politics and international affairs and director of the Program in Latin American Studies. "I have been watching her career since she was a freshman and have been continually impressed and amazed by her intellectual curiosity, resourcefulness, sophistication and insight. ... She identifies excellent questions, devours rich and expansive literatures (with an amazing attention to both theoretical and empirical research), and proposes original and compelling arguments."

Holland is writing her senior thesis on the political and legal responses of Central American nations to rampant gang-related violence. She has traveled to El Salvador and Guatemala to conduct fieldwork. She also has conducted research on campaign finance in Chile on a Paul Sigmund Grant. She intends to return to Latin America after graduation.

Merging her academic and extracurricular interests, Holland co-founded the Latin American Studies Student Organization in 2004 and has served as its president for the past two years. She also helped start Princeton Against Protectionism, a group dedicated to promoting freer trade in food.

In addition, Holland has headed both the Princeton University Figure Skating Club and Flamenco Puro, a campus dance group. She has served as a residential college adviser at Rockefeller College and as a tutor to undergraduates as well as to Princeton's Spanish-speaking workers in English.

In recognizing her at the Alumni Day ceremony, Princeton President Shirley M. Tilghman said, "Alisha has demonstrated just how much a keen mind, a disciplined passion and a well-informed concern for others can accomplish."

Mackey, who is from Wheatley Heights, N.Y., is majoring in computer science and pursuing a certificate in applied and computational mathematics. In addition to achieving an excellent academic record and receiving the Pyne Prize this year, he has been named the 2007 outstanding male undergraduate by the Computing Research Association, the highest honor that a North American college student can receive in the field of computer science. He is the first Princetonian to win this award, which was bestowed in recognition of his groundbreaking work with Assistant Professor of Computer Science David Walker on hardware faults.

"At every step, but particularly in his research activities, he has far exceeded what I imagined it possible for any undergraduate to do -- and I have worked with other very, very talented undergraduates at Princeton … ," Walker said. "When that fact is combined with his generosity and leadership in fostering diversity, I think Lester is deserving of the highest possible praise and awards. …"

Mackey also worked on a project led by former Dean of Engineering Maria Klawe to develop technologies to improve the lives of victims of aphasia, a cognitive disorder that impairs communication. Following graduation, he plans to enroll in a Ph.D. program in computer science.

He serves on the Department of Computer Science's Undergraduate Council, chairs the Undergraduate Research Symposium and is active in Paideia, a group of students from many academic backgrounds that sponsors weekly discussions with faculty members or researchers over dinner. He has been a peer adviser for both his residential college and the School of Engineering and Applied Science and a tutor in computer science.

An editor of Prism, a literary journal devoted to "dialogue, diversity and difference," Mackey also has advised incoming freshmen as a member of the Black Student Union's Leadership and Mentoring Program. He joined both the Chinese and Taiwanese-American Students Associations. Also gifted musically, he has sung in the University Chapel Choir and in Kindred Spirit a cappella group and has shared his talents through Princeton Music Outreach, which performs in local nursing homes.

"How he finds the energy to do all this is, to say the least, remarkable, but as everyone who interacts with Lester knows, he is a remarkable young man who will excel in graduate school wherever his talents take him," said Tilghman during the Alumni Day ceremony.

Drahl is a doctoral student in the Department of Chemistry. She earned her bachelor's degree in chemistry from Drew University, and came to Princeton with a prestigious graduate research fellowship from the National Science Foundation.

Drahl helped complete the synthesis of a natural product found in the Sea of Japan that inhibits antibiotic-resistant bacteria, and she currently is evaluating its biological activity.  Professor Erik Sorensen, her adviser, wrote, "Due principally to her intelligence, independence, extraordinary work ethic and wonderful personality, Carmen has had a very strong, positive impact on my group."

Kolemen, a Ph.D. candidate in mechanical and aerospace engineering, received his B.S. in mechanical engineering from Boğaziçi University in Turkey. With the aim of imaging extra-solar planets, his research focuses on providing the dynamical framework for the next generation space-telescopy consisting of a formation of spacecraft.

"Ege is the most capable graduate student I have had the pleasure to work with," said his adviser, Jeremy Kasdin, associate professor of mechanical and aerospace engineering. "His ability to assimilate the literature and see to the essentials of a problem is almost unheard of in a graduate student. I expect his dissertation to make seminal contributions."

Pourciau is a doctoral student in the Department of German. She earned her A.B. in comparative literature from Princeton in 1998 and her master's degree in interdisciplinary Jewish studies from the Jewish Theological Seminary in New York.

Her dissertation adviser, Professor Michael Jennings, wrote, "Sarah has a very real chance of setting herself apart as the finest student the department has ever produced -- she's that good." Pourciau's dissertation, "Explications," which investigates any etymological approaches to language, promises to make a major contribution to the field.

Slauter is a Ph.D. candidate in the Department of History. He received his B.A. in history from Northwestern University. His dissertation examines how political and military information moved between America, Britain and France during the American Revolution. In fact, he was unable to attend the Feb. 24 luncheon because he was conducting research in Paris.

Professor Anthony Grafton said of his dissertation: "This is history at a very high level: intellectually ambitious, methodologically innovative and stylistically elegant; a rare achievement at any age, and almost never seen in a dissertation." His adviser, Professor Robert Darnton, said simply, "His dissertation is the most promising that I have ever directed."