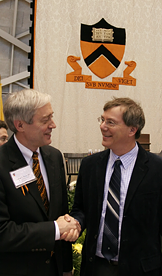 Princeton University recognized the winners of the highest honors it awards to students at Alumni Day ceremonies Saturday, Feb. 25.

Golubcow-Teglasi, who is from Potomac, Md., is concentrating in religion and pursuing a certificate in American studies. On his way to compiling a stellar academic record, he has stood out in class, according to faculty members, with the original insights he has shared during discussions and the articulate and thought-provoking papers he has written.

"Jeremy's papers were remarkable," said Stanley Corngold, professor of German and comparative literature. "Besides their formal elegance, they were breathtakingly smart, putting forward arguments that extended the perspectives of the lectures in wholly new ways."

Golubcow-Teglasi is writing a senior thesis that examines differing views of the function of the law in American legal thought in the context of Christian and Jewish theology. He plans to pursue this interest in legal philosophy and comparative theology at the graduate level.

Outside the classroom, Golubcow-Teglasi has served on the editorial board of The Daily Princetonian and also has written a biweekly column for the student newspaper. Moved by the tragic events in Darfur and the failure of politicians to fully address this crisis, he co-founded a student organization called Brother's Keeper to encourage an interdisciplinary discussion of a national response to acts of genocide. He also has directed the Princeton Model Congress outreach program for disadvantaged students, tutored paroled convicts and the homeless in Trenton, mentored students from John Witherspoon Middle School in Princeton and participated in a spring break trip to work with the poor in El Salvador, among other activities. In addition, he has served as a peer adviser to freshmen and sophomores in Wilson College.

In recognizing him at the Alumni Day ceremony, Princeton President Shirley M. Tilghman said, "Whatever Jeremy's future holds, [his] deep-seated sense of moral responsibility, coupled with the intellectual gifts I have described, is certain to do his alma mater proud."

Williams' initial intellectual and policy focus in the Wilson School was on the funding and governance of elementary and secondary education at the local level -- an outgrowth of his experience during high school as a representative to the Portland board of education. While attending Princeton, he has returned to Portland each summer to do service work, including running a program that helps high school students develop the knowledge and skills to deal with education funding and curriculum issues. More recently, Williams has become interested in activities in the international arena, and is writing a senior thesis that explores the warming relations between India and China. His future plans include serving with a nongovernmental organization in India and attending law school in this country.

In the public service domain, Williams has served as chair of the Student Volunteers Council, Princeton's largest student organization, and as an officer of the Religious Life Council, an interfaith group sponsored by the University's Office of Religious Life. He also works with Campus Compact, a national nonprofit organization dedicated to promoting civic engagement in higher education, and is co-editor of a book published by Campus Compact titled "Students as Colleagues: Expanding the Circle of Service-Learning Leadership." He has been active in Princeton's Undergraduate Student Government and has been a member of the University's Priorities Committee, which serves as the mechanism for recommending fiscal and programmatic priorities.

"James is simply an extraordinary fellow in almost every respect," said Stanley Katz, a lecturer with the rank of professor in the Wilson School. "He has been both tireless and effective in his quest to make Princeton University a better community. Princeton is a different place in 2006 than it was when he arrived, in part because of what he has done."

During the Alumni Day ceremony, Tilghman added, "I have no doubt that the communities in which [James] works and lives will come to value him every bit as much as Princeton has."

Determined to use his scientific skills toward understanding human disease, Feng focused his attention on hemoglobin, the protein that transports both oxygen and carbon dioxide throughout the body. He has successfully uncovered how one of hemoglobin's critical components is regulated. According to Professor Yigong Shi, his dissertation adviser, Feng's research findings "not only have fundamental scientific value, but also have significant impact on future treatment of millions of patients with blood disorders."

Geltner is a Ph.D. candidate in the Department of History. He earned his bachelor's degree in history, philosophy and religion from Hebrew University in Jerusalem and began graduate studies in history at the University of Wisconsin-Madison.

His dissertation explores the development of prisons in medieval Europe, focusing on the various factors that led to an explosion of prison building and incarceration in the late Middle Ages. His research is expected to deepen and broaden the intellectual foundations of penal history. Professor William Jordan, his dissertation adviser, called him "extraordinary in every way" and said that Geltner's work "promises to have a colossal impact on ideas about the origin of what has sometimes been called a 'persecuting society.'"

Passannante is a doctoral student in the Department of English. He earned his bachelor's degree in English literature from Yale University. A scholar of the early modern period, he is writing a dissertation that explores the myriad connections between literature, humanism and science through the reception of "De Rerum Natura," an ancient scientific poem by Lucretius that was rediscovered in 1417 after 400 years of oblivion.

Professor Leonard Barkan, his dissertation adviser, said that Passannante "has taken a wider view, asking questions about not just the comparison between a 'poetic' writer and a 'scientific' writer but about the deep interrelation -- sometimes opposing, sometimes contagious -- between those discourses. It is one of the most original and most promising dissertation plans I can remember reading."

Shih is a Ph.D. candidate in the Department of Physics. He earned a bachelor's degree in physics and mathematics from Harvard University and a master's degree in astronomy and astrophysics from the University of Cambridge.

His dissertation focuses on "minimal string theories" in the belief that their exact formulation may shed light on string theory as a whole. This branch of fundamental theoretical physics may someday provide answers to the deepest questions in modern physics. According to his thesis adviser, Professor Nathan Seiberg of the Institute for Advanced Study, Shih "has all the characteristics of a star researcher at the beginning of a spectacular scientific career. … I expect David to continue on his meteoric trajectory and to become one of the world leaders in his field."