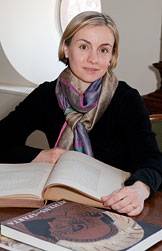 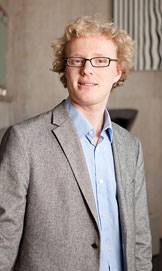 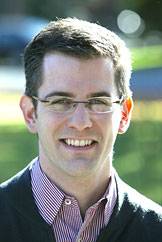 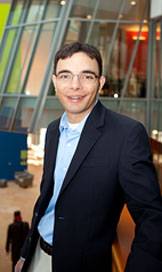 Princeton University graduate students Giada Damen, Marcus Hultmark, Noam Lupu and Silviu Pufu have been named as co-winners of the Porter Ogden Jacobus Fellowship, Princeton's top honor for graduate students. The fellowship supports the final year of study and is awarded to students whose work has exhibited the highest scholarly excellence.

The Jacobus Fellows will be honored at Alumni Day ceremonies Saturday, Feb. 26, at Jadwin Gymnasium.

Damen, a Ph.D. candidate in the Department of Art and Archaeology, earned bachelor's and master's degrees in history of art from the University of Udine in her native Italy. Before enrolling at Princeton, Damen worked at the Frick Collection in New York and Christie's in Milan.

Damen's dissertation explores the trade in antiquities between Italy and the eastern Mediterranean during the 15th and 16th centuries. She looks at how the growing trade in artifacts from Greece and the Ottoman Empire made its way through Italy to the rest of Europe and fundamentally changed attitudes toward classical artifacts.

According to Damen's dissertation adviser Patricia Fortini Brown, a professor of art and archaeology emeritus, "The dissertation is clearly shaping up as an original contribution of major importance to early modern European studies. Participating in current debates on the geography of art, Giada's thesis is at the cutting edge of a new wave of scholarship on cross-regional comparisons and convergences."

"I see my dissertation as a contribution to the wider ongoing examination of the Mediterranean as a place of cultural, economic and artistic exchange between different groups and cultures," said Damen, "a theme that in the past few decades has greatly interested scholars from many different fields."

Hultmark, a doctoral student in the Department of Mechanical and Aerospace Engineering, first came to Princeton as a visiting student from the Chalmers University of Technology in Sweden, where he earned a master's degree in thermo and fluid dynamics.

"I hope to make an important contribution to the basic understanding of turbulence and to the design of energy-efficient vehicles and improved climate- and weather-prediction methods," Hultmark said.

Alexander Smits, Princeton's Eugene Higgins Professor of Mechanical and Aerospace Engineering and Hultmark's thesis adviser, noted that Hultmark has amassed a "remarkable record of achievement for a graduate student." Smits added, "He is a superb experimentalist, but what makes him special is that he asks the right questions. … I am confident that Marcus has a remarkable future ahead of him as a scientist, engineer and teacher."

Lupu, a Ph.D. candidate in the Department of Politics, earned a bachelor's degree in political science and history from Columbia University and a master's degree in social science from the University of Chicago.

Lupu's dissertation, along with a number of articles he has published, explores the role of partisanship and inequality in Latin American politics over the past two decades. His research analyzes voters' stereotypes about and attachments to political parties, focusing on the recent "brand dilution" of parties in the region.

Lupu noted that his research on the breakdown of political parties in Latin America comes as nearly a quarter of the region's established political parties have broken down since 1990. By going beyond the explanation of poor incumbent performance, he aims to produce a thesis that "improves our understanding of intra-party interactions in developing democracies and the political calculations of party elites."

Lupu "combines deep and firsthand knowledge of the region of Latin America with excellent training in both methods and comparative [and] American theory," said his dissertation adviser Deborah Yashar, a professor of politics and international affairs. "As such his work will have broad appeal for a wide range of scholars; his findings moreover will be of great interest to those working on parties and constituencies."

Pufu, a doctoral student in the Department of Physics, earned a bachelor's degree in physics with a certificate in applied and computational mathematics from Princeton in 2007.

Pufu's work focuses on string theory, the complex branch of modern physics that seeks to describe all the forces of nature in one unifying theory. His dissertation focuses on fundamental and applied string theory, specifically the Anti-de Sitter Space/Conformal Field Theory correspondence, which he defines as "a duality between strongly interacting quantum systems and gravity."

"In my research so far, I have had to use concepts and methods from several building blocks of physics such as quantum mechanics, general relativity, electrodynamics, the theory of phase transitions and fluid mechanics," Pufu said. "I believe that seeing the connections between these topics made me understand each of them better than if I were to examine them one at a time."

Pufu has generated research three to four times beyond the amount required to produce a dissertation, according to his adviser Steven Gubser, a professor of physics and director of graduate studies in the department. "Silviu is without a doubt a rising star," Gubser said. "His total corpus of work resembles that of a senior postdoc, and it shows greater diversity of achievement across the spectrum of problems in string theory than one usually sees in a young investigator. … It's hard to see how he does it all until you work with him on a physics problem: He steamrolls difficulties with a combination of cleverness and hard work, and he quickly leverages his understanding from one problem to the next."