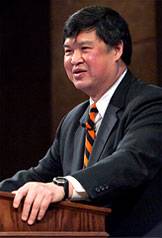 Federal judge Denny Chin, a 1975 Princeton graduate and this year's Woodrow Wilson Award recipient, presents a talk on the many high-profile cases he has overseen during his career. Chin's lecture was part of a daylong slate of activities during the University's annual Alumni Day program. He was honored during a luncheon along with Elaine Fuchs, a 1977 Princeton graduate alumna who is this year's James Madison Medalist, and winners of the University's top honors for undergraduate and graduate students.

Presentations of Princeton's top awards for alumni and students, along with lectures and family activities, were among the full day of events held across campus Saturday, Feb. 26, during the University's annual Alumni Day program. 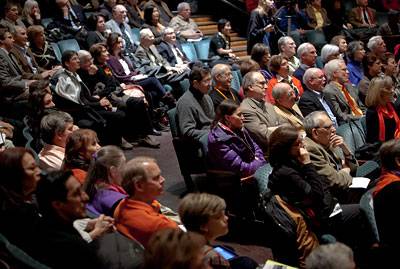 Later Fuchs and Chin were honored at a luncheon in Jadwin Gymnasium with winners of the University's highest honors for undergraduate and graduate students.

Fuchs, who is the Rebecca C. Lancefield Professor in Molecular Genetics and Cell Biology at Rockefeller University and a pioneer in the study of skin biology, detailed advances in her field in a lecture titled "Skin Stem Cells: Their Biology and Clinical Promise." An outspoken advocate for and mentor to female scientists, Fuchs also noted that she was one of a few female graduate students in the sciences at Princeton in the early 1970s and that some faculty who initially were not receptive to her eventually became important mentors. 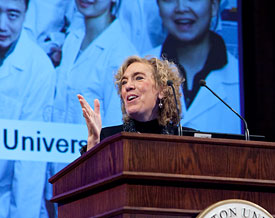 Fuchs discusses advances in the field of stem cell research in the years since she received her Ph.D. from Princeton in 1977.

In Chin's lecture, titled "The Life of a Judge: From Megan's Law to Bernie Madoff," he used humor to bring levity to an overview of the many weighty and often emotional, high-profile cases he has overseen in his 17 years as a federal judge. These included examining the constitutionality of the Megan's Law sex offender registry and the 2009 trial of financier Bernard Madoff. Chin, who was born in Hong Kong, also discussed his family's journey to the United States and reflected on his standing as a prominent Asian American judge.

"My appointment was important to many people," he said. "It's hard to imagine that today I am still the only active Asian American federal appellate judge in the country."

Princeton President Shirley M. Tilghman said in introducing the student award winners, "This year's honorees have impressed us all with their accomplishments and their promise for the future." 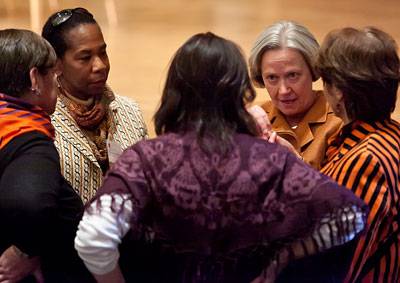 Tilghman talks with Alumni Day attendees during a break between the two morning lectures at Richardson Auditorium.

In addition, a daylong slate of activities for alumni, parents of current undergraduates and families took place in several campus locations. These included tours of the new Frick Chemistry Laboratory and of the prehistoric "Dinosaurs and More" holdings in Guyot Hall; a panel discussion with the first students who participated in Princeton's pre-enrollment service abroad initiative, the Bridge Year Program; lectures by University faculty on topics such as Greek tragedy, immigration, health and happiness, electronic plastics, and North Korea's nuclear situation; a discussion led by Dean of Admission Janet Rapelye on "Navigating the College Admissions Process"; and a service of remembrance honoring deceased Princeton alumni, students, faculty and staff members.

David Parris, a 1970 Princeton graduate alumnus and curator of natural history at the New Jersey State Museum, leads a tour of dinosaur fossils and other prehistoric samples in Guyot Hall, home of the Princeton Environmental Institute. 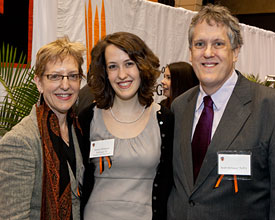 Thomson-DeVeaux celebrates with her mother, Vivian Thomson, a 1977 Princeton graduate, and father Scott DeVeaux, a 1976 graduate. 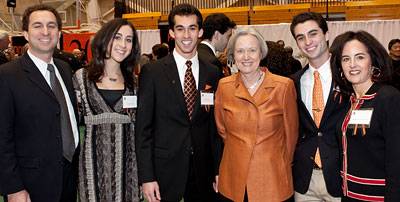 Tilghman greets Rosen and members of his family at a reception prior to the Alumni Day luncheon at Jadwin Gymnasium.