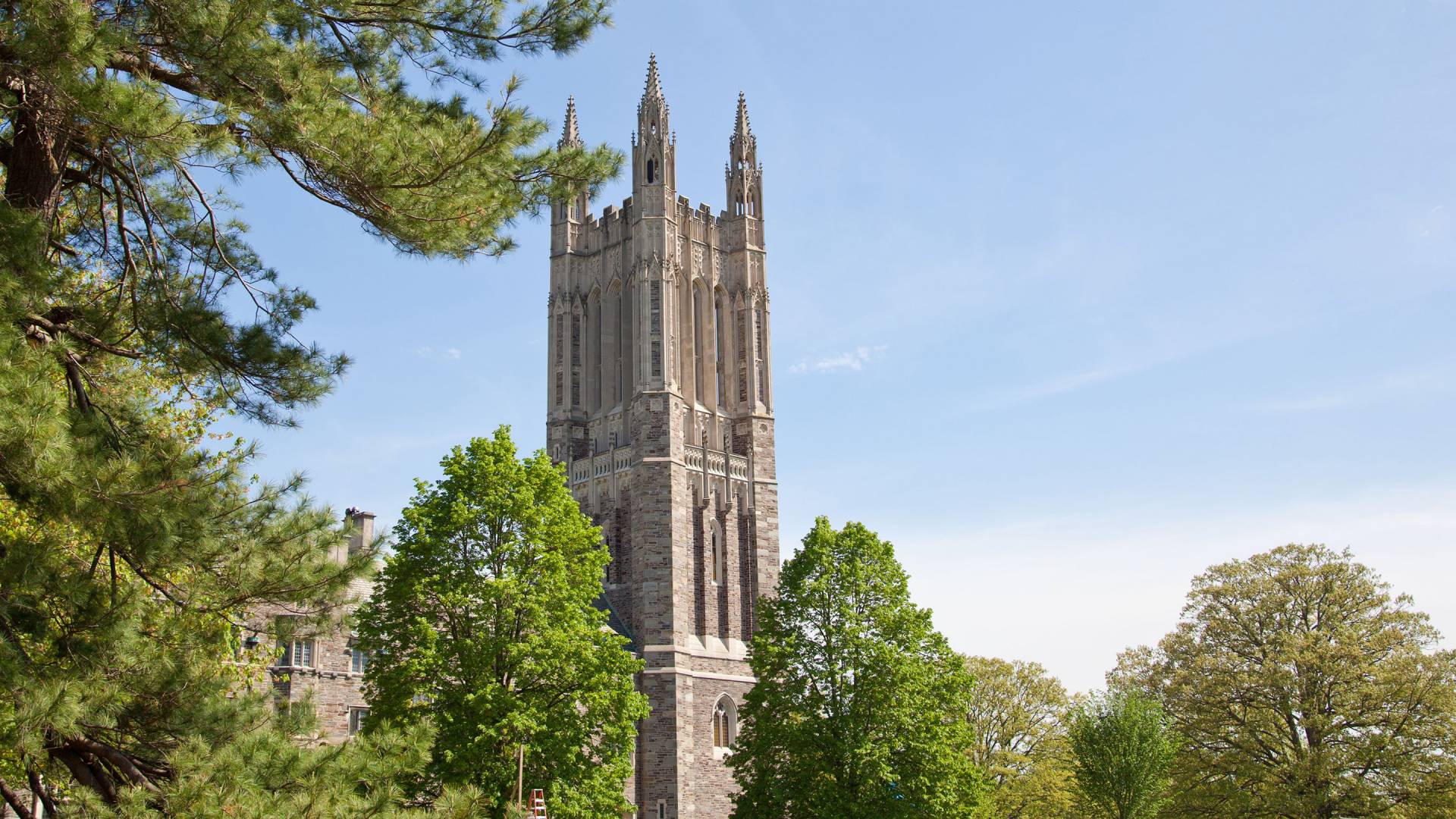 Alexandra Middleton, Pranav Mundada, Ian Ochs and Margarita Rosa have been named winners of the 2020-21 Porter Ogden Jacobus Fellowship, Princeton University’s top honor for graduate students. The fellowships support their final year of study at Princeton and are awarded to one Ph.D. student in each of the four divisions (humanities, social sciences, natural sciences and engineering) whose work has exhibited the highest scholarly excellence. 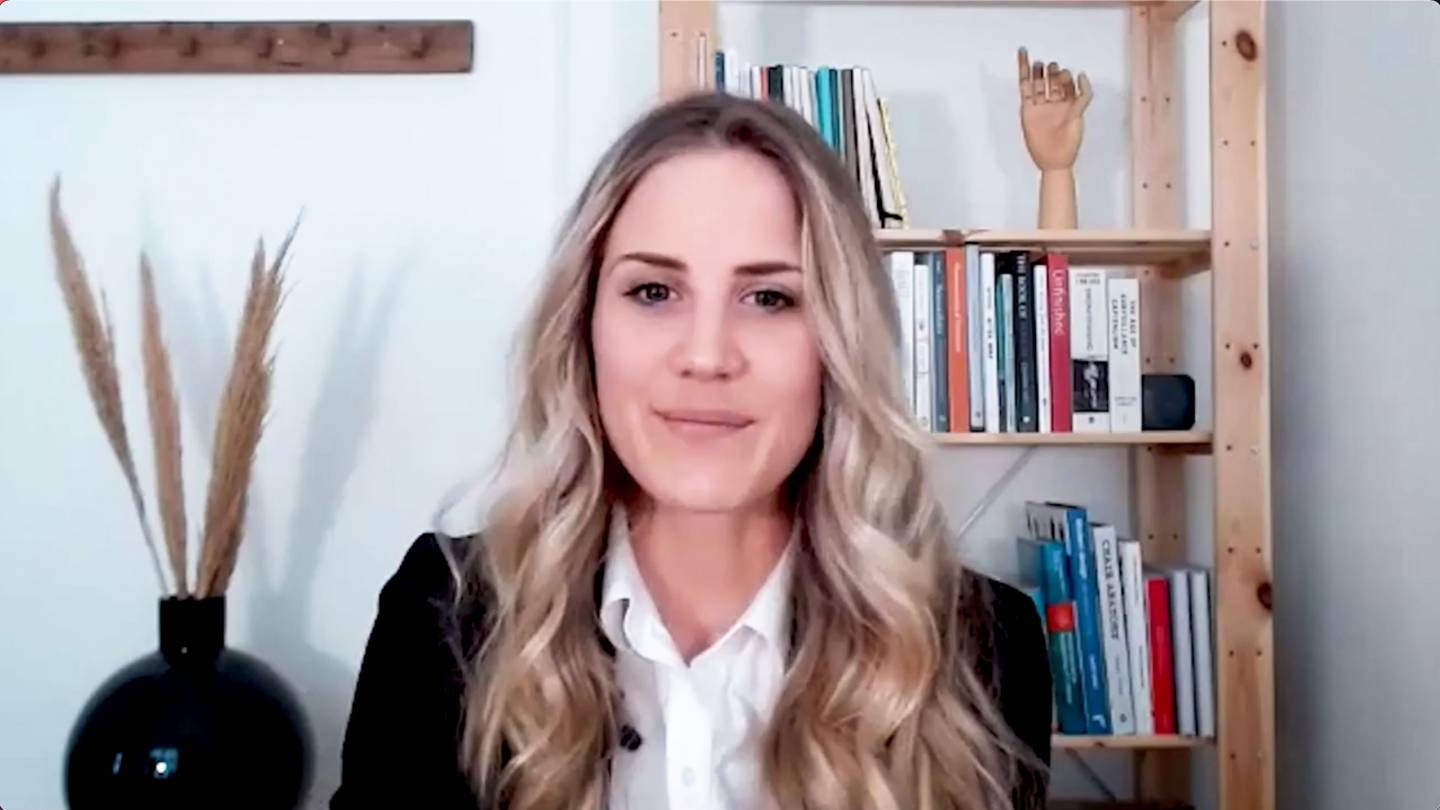 Alexandra Middleton, a doctoral candidate in anthropology, discusses her ethnographic research investigating the lives of people living with cutting-edge neuroprosthetic technologies in Sweden, as both clinical trial participants and humans enmeshed in social worlds.

Alexandra Middleton, a doctoral candidate in anthropology who came to Princeton in 2015, earned a bachelor’s degree in cultural anthropology from Duke University.

Her dissertation, “Designing the Sensory: Neuroprosthetics and Human-Machine Relations In-The-Making of Laboratory and Domestic Life,” is an anthropological investigation of neuroprosthetic technologies that aim to restore the lost sensory feedback and ameliorate the phantom limb pain of amputee patients. The two Sweden-based clinical trials that Middleton examines in her dissertation are the first instances in the world where prostheses that are integrated with patients’ muscles, bones and nerves are taken out of the laboratory and used freely by trial participants in their daily lives.

“Situating this inquiry not only in formal experimental sites but also in the informal domestic spaces where human lives and technologies intertwine, the home emerges as a key, yet often overlooked, site of science-in-the-making, beyond the ‘control’ of the clinical trial,” said Middleton. “I chronicle patients’ strategies for navigating everyday life with their neuroprostheses, taking my interlocutors not only as trial subjects or beta-testers, but also as complex individuals enmeshed in social worlds with contexts and histories.”

Middleton, whose work engages sensory and visual anthropology, added a photographic component to her ethnography and already published some of her findings in flagship journals in the social and biomedical sciences.

“What strikes me about her work is how creatively she bridges the social sciences, the humanities and the brain sciences,” said João Biehl, the Susan Dod Brown Professor of Anthropology and chair of Middleton’s doctoral committee. “Her work is really on cutting-edge neural science and human-machine relations and is interdisciplinary and radically humanistic through and through.” 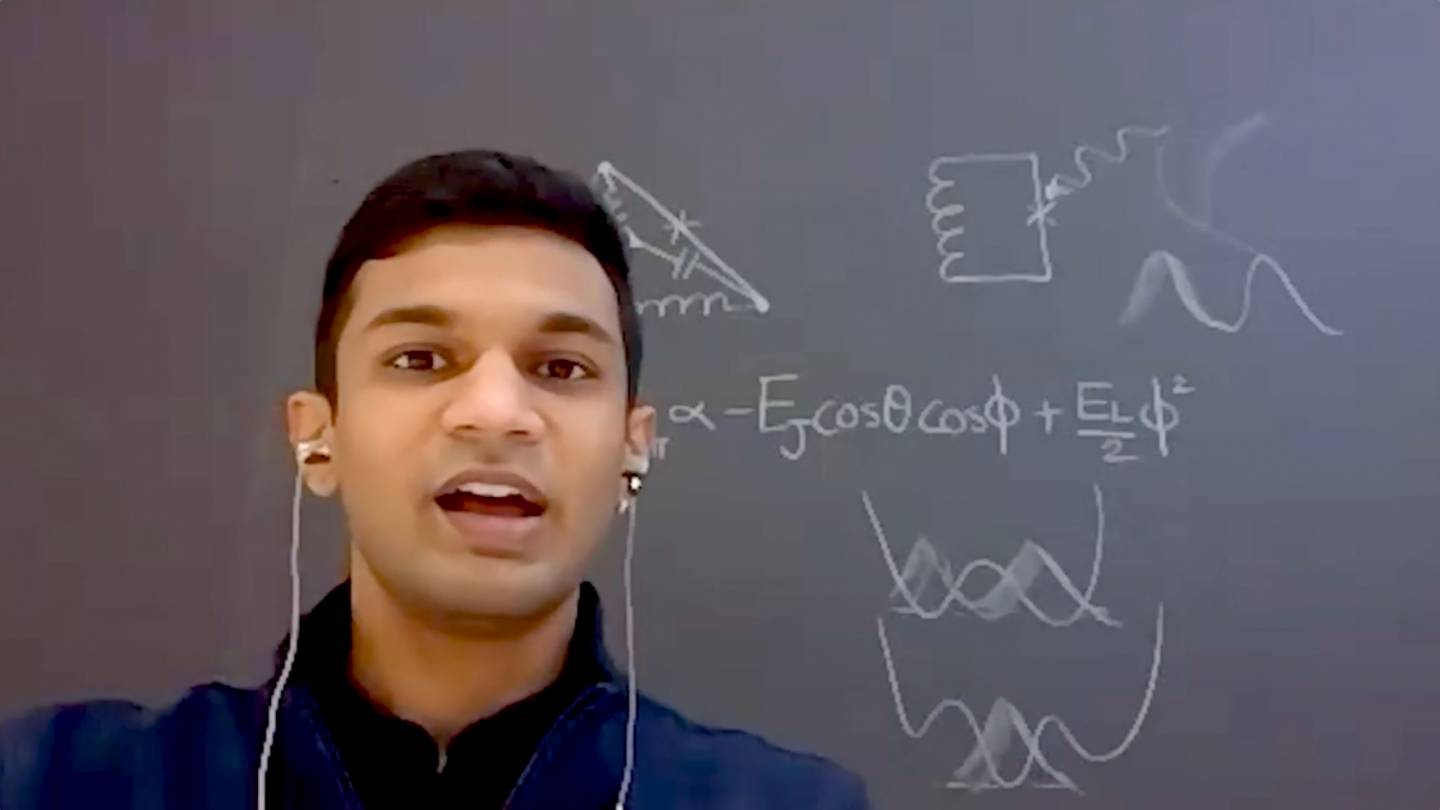 Pranav Mundada, a doctoral student in electrical and computer engineering, discusses the potential applications of his research to improve the performance of quantum computers.

Pranav Mundada, a doctoral student in electrical and computer engineering who came to Princeton in 2016, earned bachelor’s and master’s degrees in physics from the Indian Institute of Science.

Mundada’s research focuses on developing quantum devices using superconducting materials, which would accelerate the realization of a large-scale quantum computer. Though his work, he has realized novel quantum processors by drawing insights from areas of quantum mechanics, trapped ions, microwave engineering and machine learning.

“The kind of applications quantum computers will open up, it’s actually not even possible for us to think of right now,” Mundada said. “That's one of the key exciting challenges that I find in this field, where we have a new tool, that humanity has a new tool, where we don’t know what all we can do with it because it is a quantum leap, because the processes follow quantum principles of quantum physics.”

Mundada said he plans to leverage his experience with quantum hardware to continue to solve grand challenges in quantum applications, especially advancing coherence of these systems, which will open opportunities for applications in a wide range of scientific domains, from designing aircraft to manufacturing drugs.

“Pranav’s dissertation was really focused on figuring out what a next generation quantum bit could look like,” said Andrew Houck, professor of electrical and computer engineering. “Typically, what we have done in the field of quantum computing is to try to eliminate sources of noise. If we can eliminate all the noise, our qubits will live longer, our computers will work with fewer errors and in the end, we'll be able to do interesting things. Pranav has taken a very different approach. He’s instead tried to engineer a new qubit that is fundamentally immune to the noise around it, rather than trying to eliminate the noise. What this means is that he could build a qubit which could last a long time, even in the presence of noise. And he was able to actually do this, he built the first qubit that is fundamentally immune to the kinds of noise that plague present day quantum computers.”

Mundada interned for IBM in 2018 and Q-CTRL in 2020 to work on quantum optimal control. He is a past treasurer of the Association of South Asians at Princeton. 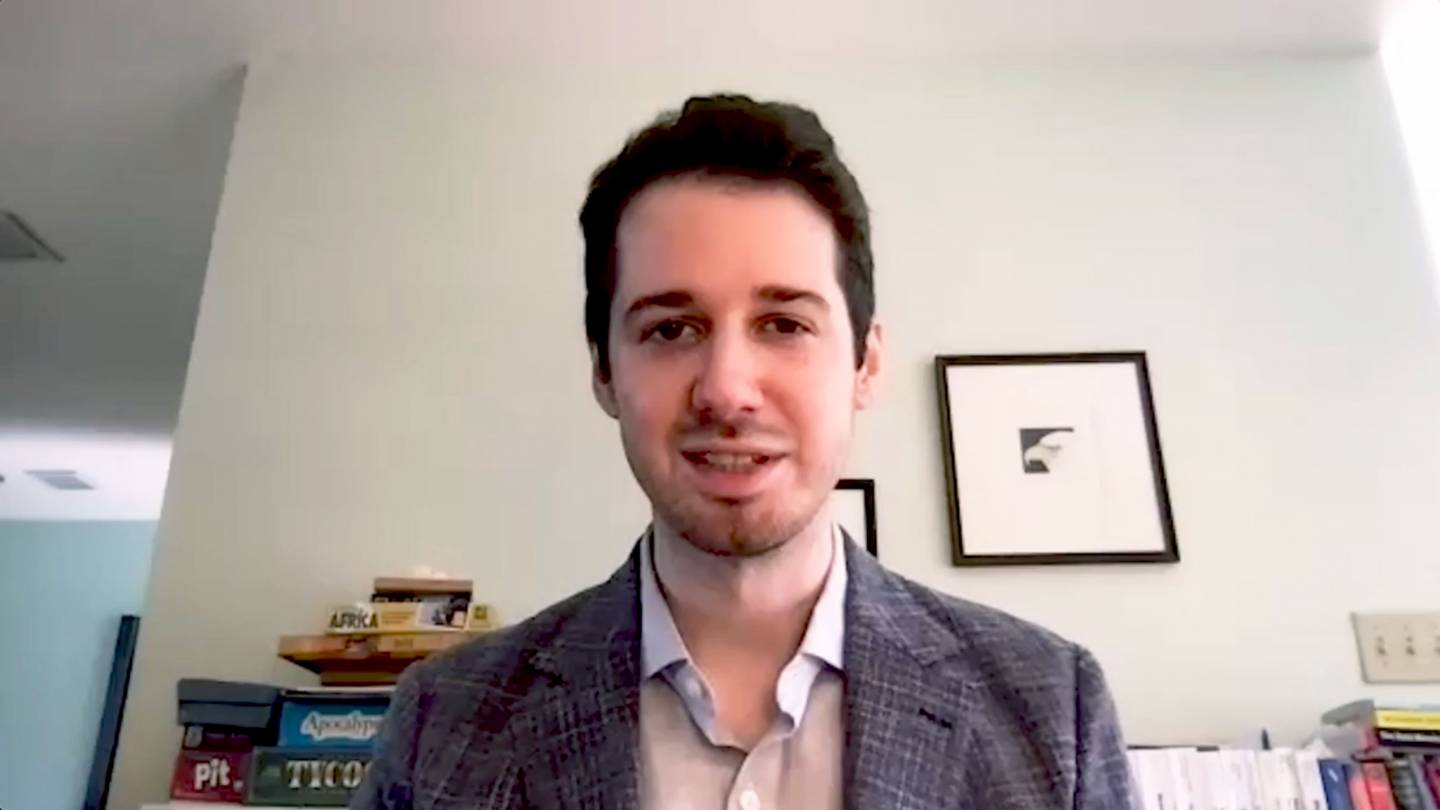 Ian Ochs, a doctoral student in plasma physics, explores ways to drive rotation in plasma, the superheated gas central to fusion energy, which holds the promise of providing a clean and abundant source of energy.

Ian Ochs, a doctoral student in plasma physics who came to Princeton in 2015, earned a bachelor’s degree in physics from Harvard College.

His dissertation, “Controlling rotation in magnetized plasmas through wave-driven charge and momentum transport,” explores ways to drive rotation in plasma, the superheated gas central to fusion energy, which could eventually be used to provide a clean and abundant source of energy and also has other scientific and practical applications.

Ochs’ research holds the promise of reducing instabilities in plasma that lead to turbulence and lower the effectiveness of the fusion reaction, as well as enhancing the recovery of fusion energy.

“Our ultimate goal is to be able to maintain a fusion reaction, essentially a steady state, in the laboratory,” he said. “So what we would really like to do is put our device there, flick the switch and have fusion continuously occurring in a controlled manner, for a long time. If you can achieve this, then you can put non-intermittent, completely green power on to the power grid. … If you could have this green power without the intermittency problem, then it would be much easier to solve the climate crisis.”

“What stands out in Ian’s thesis work is both its vast scope and its penetrating generalizing principles,” said Nathaniel Fisch, professor of astrophysical sciences and director of the Program in Plasma Physics. “His research has already had significant impact in several, quite diverse, subareas of plasma physics, including magnetic fusion, inertial fusion, plasma waves, astrophysics and plasma mass filters. While already material for more than one thesis can be found in his diverse discoveries, Ian was not satisfied until he also uncovered the underlying fundamental connections between his apparently diverse contributions, which centered on addressing in a profound way how exactly charge is transported in magnetized plasma by waves.”

Ochs said he plans to build upon his research into wave-driven rotation processes in an academic setting. He eventually hopes to apply this fundamental understanding to control rotation in plasma devices.

Ochs has published more than 15 papers on plasma behavior and phenomena. He is the recipient of a Department of Energy Computational Science Graduate Fellowship, the Thomas H. Stix Travel Award from the American Physical Society and Princeton’s Centennial Fellowship. 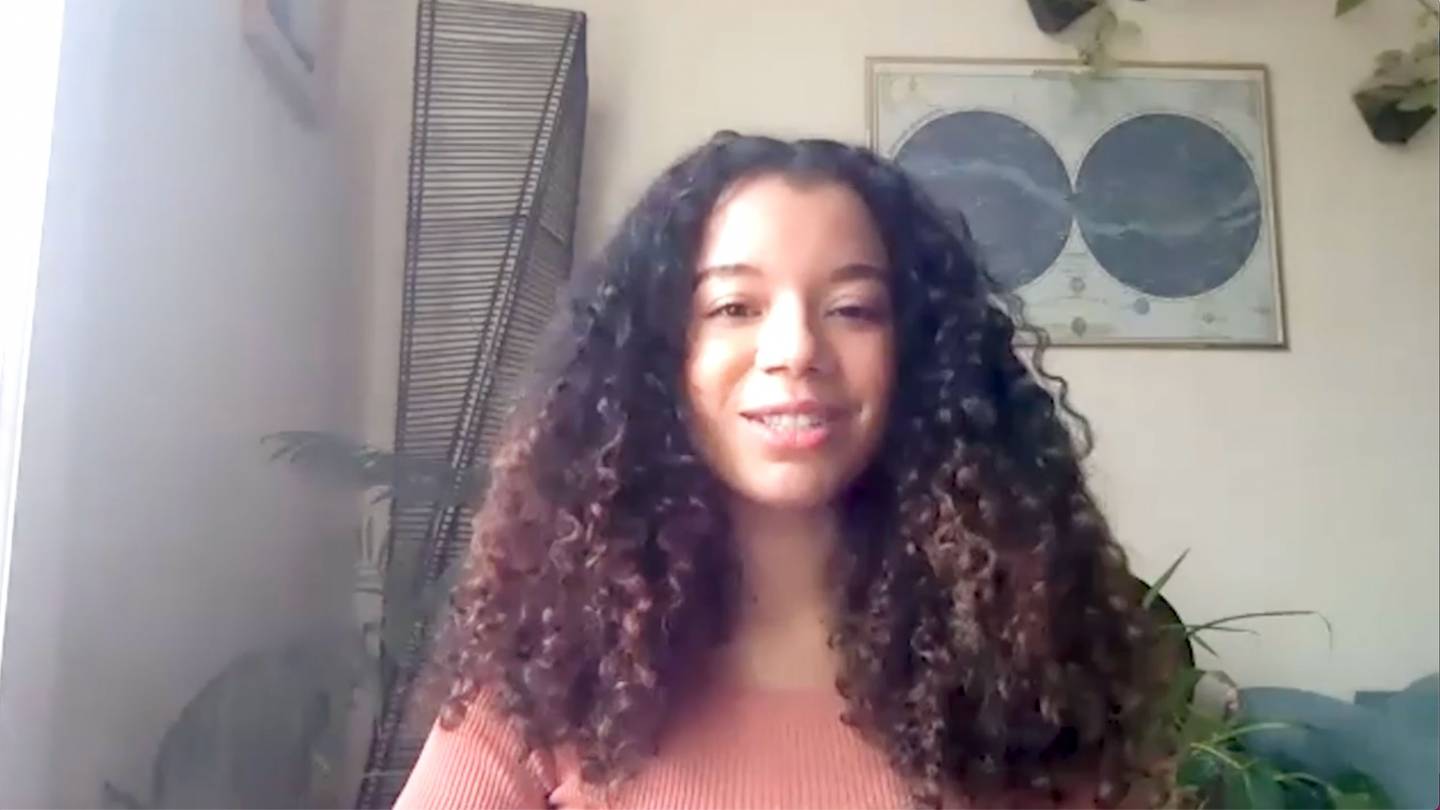 Margarita Rosa, a doctoral student in comparative literature, discusses her research on the legal history of doctrines that kept the children of slave women enslaved in Brazil.

Margarita Rosa, a doctoral student in comparative literature who came to Princeton in 2015, earned a bachelor of arts in political science and philosophy from Rutgers University. In 2018, she earned a graduate certificate in African American studies from the Department of African American Studies.

Her dissertation, “Wombs of Liberation: The Legislation of Black Maternity and Freedom of the Womb in Brazil,” traces the legal history of doctrines that kept the children of slave women enslaved based on the Roman principle partus sequitur ventrem, or “the child follows the condition of the womb.”

Beginning with Roman legal rulings and ending with the 1871 Free Womb Law in Brazil, Rosa aims to understand how early modern Portuguese colonizers understood this principle and applied it in the colony of Brazil, and also how it became ubiquitous in American societies during the early modern period and until the passage of Free Womb laws.

Susana Draper, an associate professor of comparative literature and one of Rosa’s advisers, said Rosa’s diverse interests and involvement on campus — ranging from starting a reading group on abolition to teaching poetry through the Prison Teaching Initiative — have helped inform her research.

She added, “Her work is very original in that sense, that it moves across very different levels of discourse and analysis.”

Next year, Rosa will be a Mellon Postdoctoral Fellow and lecturer at Stanford University.