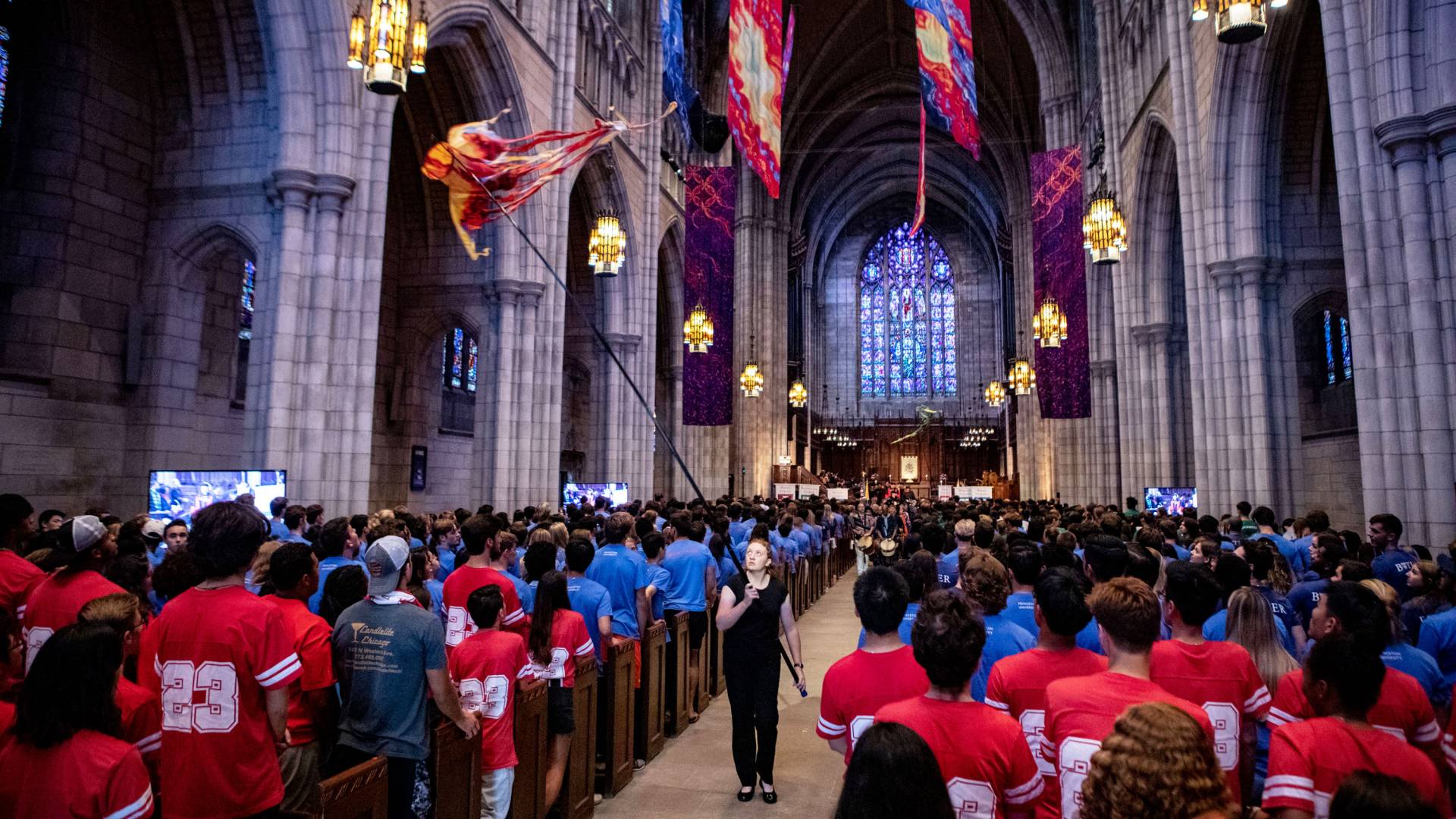 The Opening Exercises ceremony, held in the University Chapel on Sunday, Sept. 8, marks the start of the academic year at Princeton.

At Opening Exercises on Sunday, Sept. 8, Princeton University President Christopher L. Eisgruber welcomed the Class of 2023 and asked them to contemplate the insights of world-renowned novelist Toni Morrison, who died on Aug. 5.

Morrison, a Nobel laureate, was Princeton’s Robert F. Goheen Professor in the Humanities, Emeritus, “who had a very special role in this community for 30 years,” Eisgruber said to the students gathered in the University Chapel. He noted that two years ago, the University dedicated one of the oldest buildings on campus in her name, to “honor the marvelous author and teacher who contributed so much to Princeton and the world.” 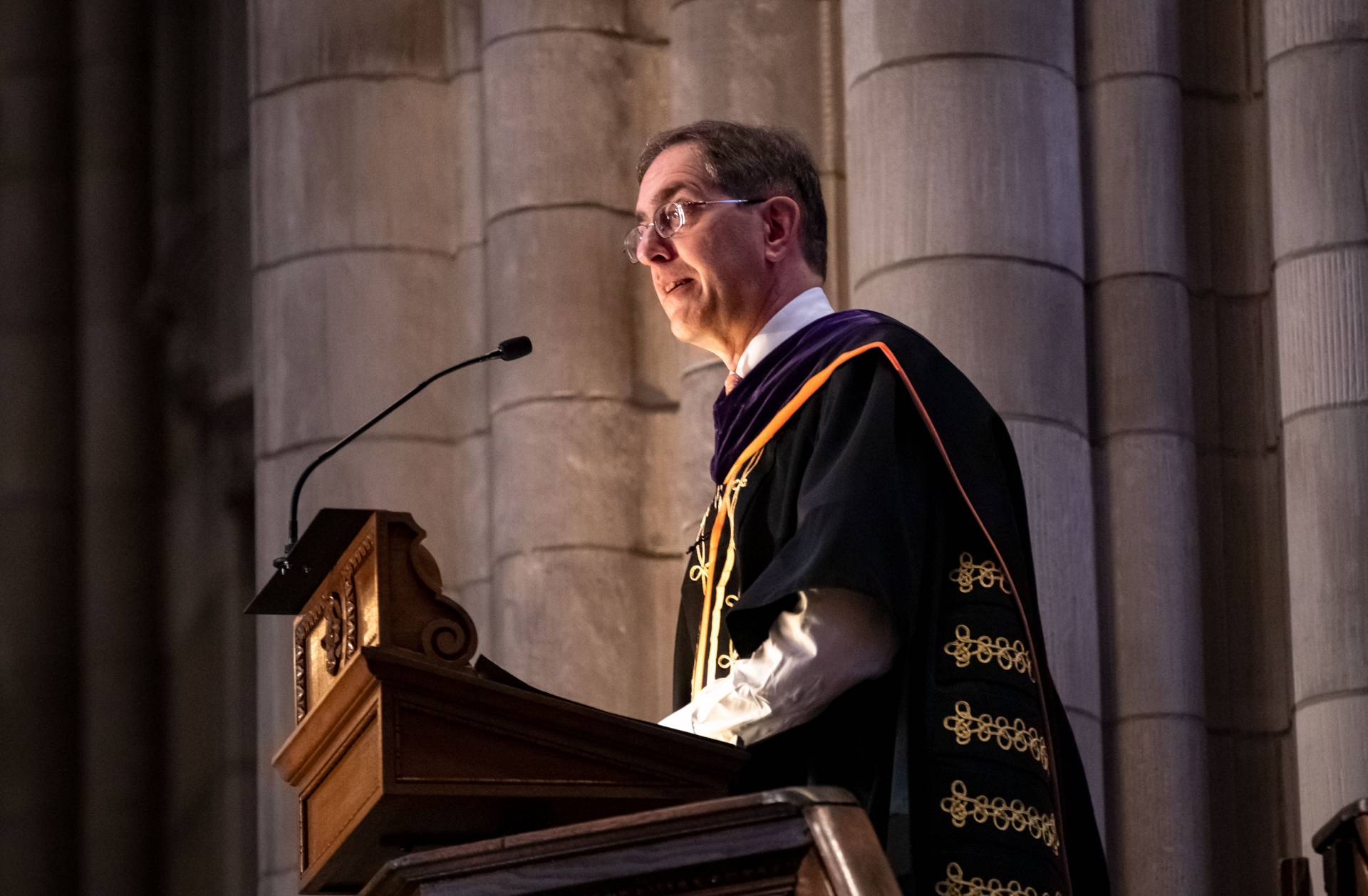 Princeton President Christopher Eisgruber used his address to reflect on insights from Nobel laureate Toni Morrison, Princeton’s Robert F. Goheen Professor in the Humanities, Emeritus, who died on Aug. 5. Eisgruber said that Morrison “had a very special role in this community for 30 years.”

Eisgruber invited the students — coming from a diverse range of backgrounds from across the country and around the world —  to join the intellectual community as well as to build their own "personal Princeton."

Opening Exercises, which dates to at least 1802, inaugurates the new academic year. The interfaith ceremony features the president’s address as well as hymns, readings, prayers and the awarding of undergraduate academic prizes. Classes begin on Wednesday, Sept. 11.

After leaving the chapel, members of the incoming class participated in the traditional Pre-rade, where they were cheered on by other students, alumni, faculty and staff as they symbolically entered the front campus through the FitzRandolph Gate. 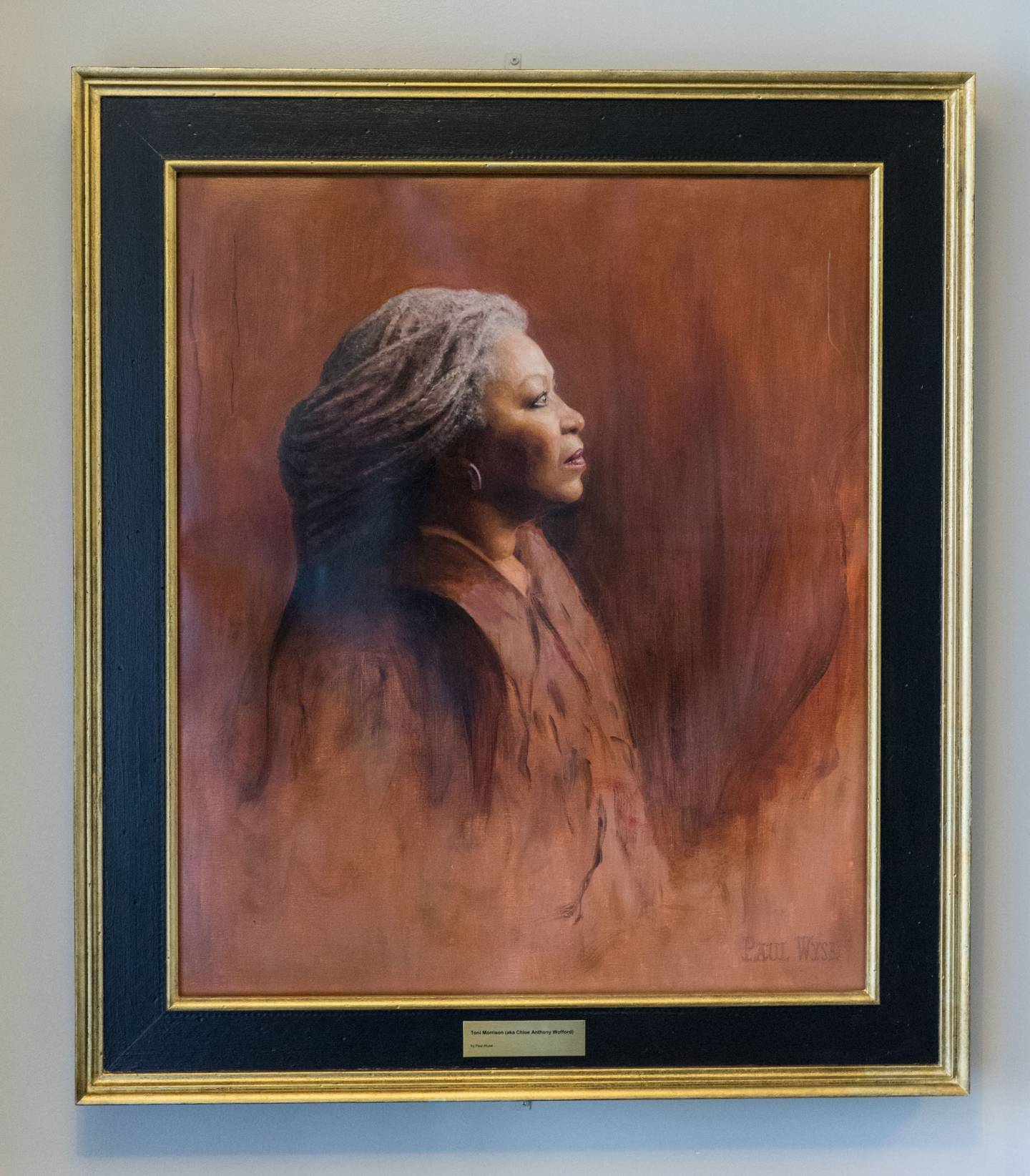 A portrait of Morrison by Paul Wyse hangs in Morrison Hall, which was named in her honor two years ago.

“The Wisdom of the Dead and the Energy of the Living”: Reflections on Insights from Toni Morrison

These Opening Exercises serve two purposes. They are an occasion for joy and celebration, as we embrace new members of our community and greet returning friends with colorful kites and soaring music. Yet, even as we swirl those kites and sing songs here in the University Chapel to signify new beginnings, we also recognize that Opening Exercises are a moment for reflection about our University’s mission, the challenges that lie ahead, and the changes occurring within our community and around it.

As we begin this particular year, I find myself contemplating the insight and achievements of one person who had a very special role in this community for 30 years but is no longer with us as we begin this academic year. I am speaking of Toni Morrison — Nobel laureate, Pulitzer Prize winner, one of the greatest novelists the world has known, and Princeton’s Robert F. Goheen Professor in the Humanities Emeritus — who died just over one month ago, on Monday, August 5.

Toni Morrison improved this University in many ways, and we will remember her always. Indeed, two years ago, the University trustees, on the recommendation of a committee that included faculty, students and alumni, decided that the building that houses the dean of the college and the dean of undergraduate students should be named Morrison Hall to honor the marvelous author and teacher who contributed so much to Princeton and the world.

One of Professor Morrison’s lesser-known achievements is that she wrote one of the best essays ever composed about Princeton University. The essay is called, “The Place of the Idea; the Idea of the Place.” She prepared it 23 years ago to celebrate the University’s 250th anniversary, and she delivered it in front of Nassau Hall, where the Pre-rade will take place after this ceremony.

Professor Morrison’s central theme in her speech was what she called, quoting the literary critic Geoffrey Hartman, how the “‘wisdom of the dead and the energy of the living’ merge to become a tradition that informs the present and shapes the future.”

When Professor Morrison spoke those words, her own voice was an awesome example of the “energy of the living.” It is jarring now to regard her insight as belonging to the “wisdom of the dead.” But she has become a part of the heritage of this place. Her influence will endure for generations, her name inscribed upon the campus and her voice speaking eloquently from the past to the present. She is at once part of our traditions, and also a potential guide for you as you consider your own relationship to those traditions. 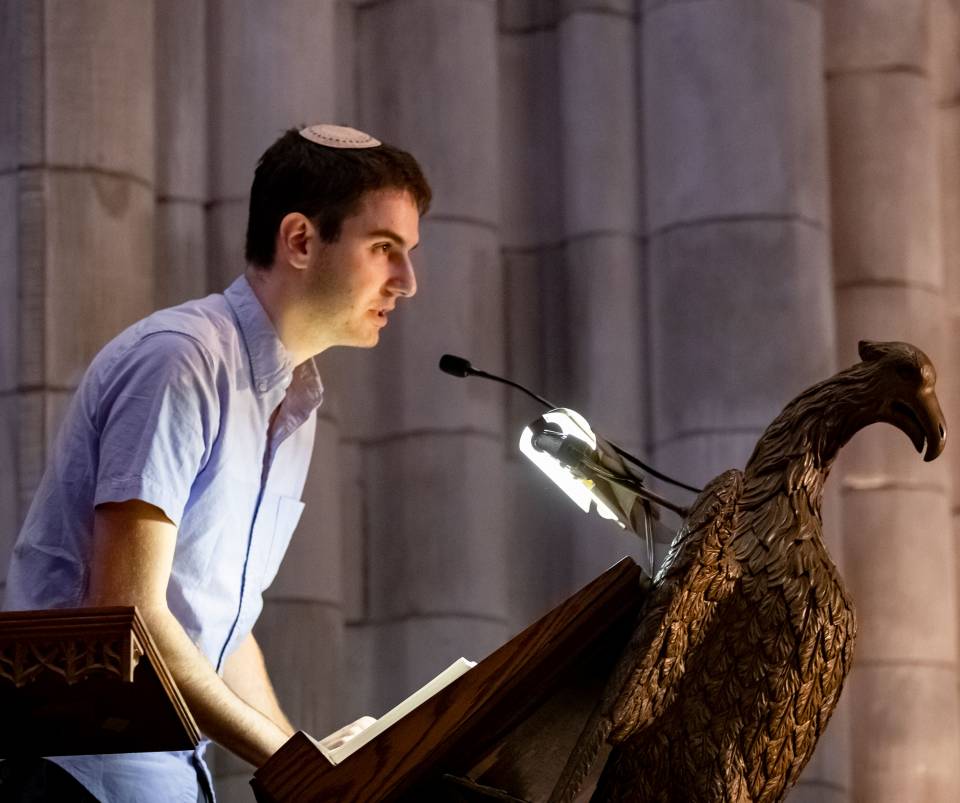 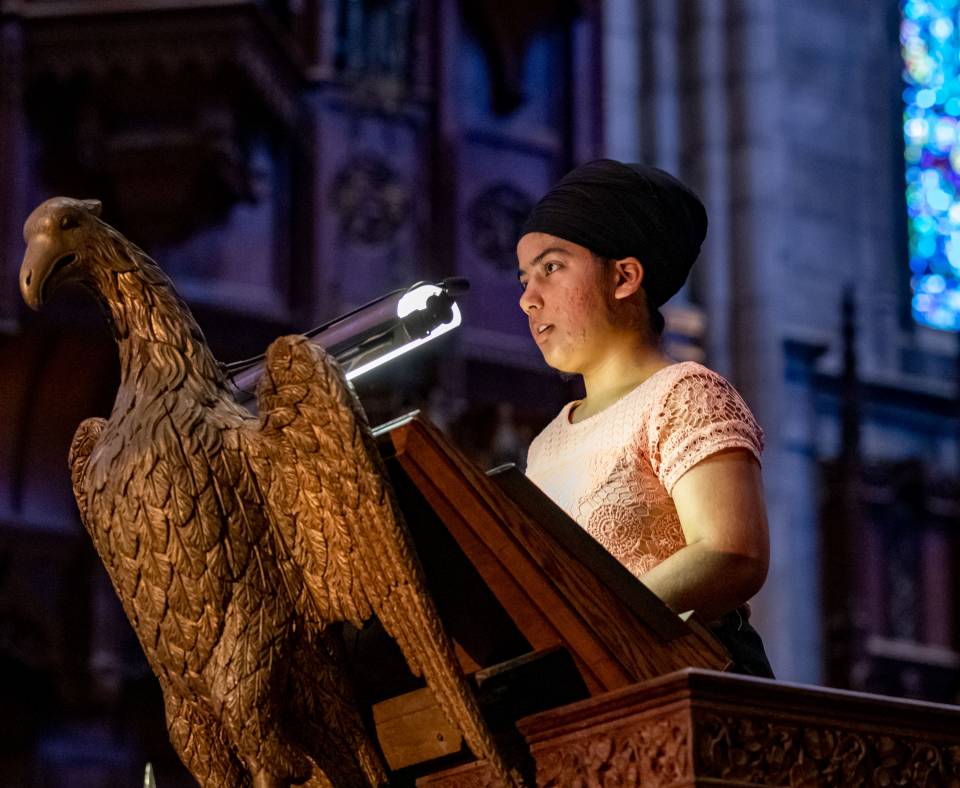 Opening Exercises includes music, prayers and readings from various traditions. Micah Newberger, a member of the Class of 2022, reads Psalm 8 in Hebrew and English.

Jaskiran Kaur, of the Class of 2020, gives a reading from the Sikh tradition.

In her speech two decades ago, Professor Morrison imagined some future possibilities with uncanny clarity, so that her words resonate now as if they had been written this month. She reminded her listeners, for example, that Princeton’s mission depended upon “encounters and collaborations among and between strangers from other neighborhoods and strangers from other lands.” She also warned us that the University’s values would be put at risk if the world were to become “overwhelmed by fear and mediocrity, by xenophobia [in other words, by animosity toward foreigners] and mendacity [in other words, by a disregard for facts].”

You might think that Professor Morrison even anticipated questions about digital media related to those that James Williams examines in "Stand Out of Our Light" and that you will discuss with him this evening. Professor Morrison asked her audience whether, at some point in Princeton’s future, “instruction [would] be executed solely in solitude by the isolated handling of sophisticated new machines.” She answered this question by affirming her own conviction that “a premier liberal arts education requires students and faculty to face each other in what Woodrow Wilson described as ‘personal conference and intimate counsel.’”

For most of her essay, though, Professor Morrison focused on a demanding practice at the core of the University, a practice that she thought essential for “the translation of tradition, of history, into a livable present and a civilized future.” She referred to that practice in several ways:  as “priz[ing] conscience above orthodoxy,” as “the dissenting idea,” and as “dissenting from orthodoxy.”

One might be tempted to give these words a political reading, so that they underscore how students and faculty may serve as critics to powerful people or governments. Certainly that is part of what Professor Morrison had in mind. She said that “service to the individual, to the government, to the world requires unwavering commitment to intellectual freedom,” and she insisted on the need for academic departments and intellectuals to engage with “the great and tumultuous issues of [the] day.” 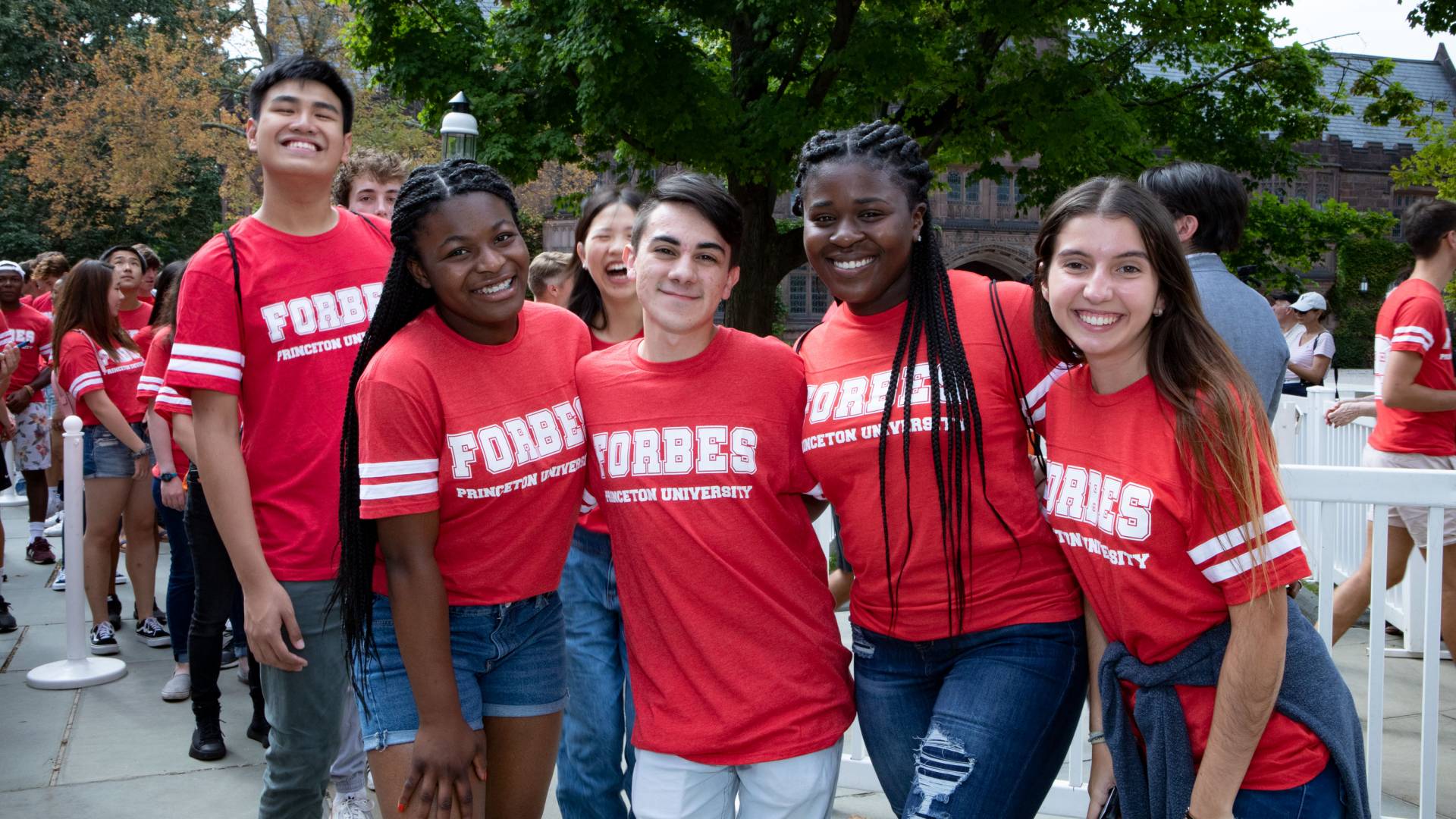 Yet, however important it may be to dissent from unjust exercises of power, Professor Morrison’s idea of “dissent from orthodoxy” runs deeper than that. It requires each of us to interrogate and challenge our own orthodoxies. Dissent, she said, cannot be merely a matter of style or fashion. It must instead go to things that are foundational. She described the practice as one befitting people comfortable with “intense … political debates [and] metaphysical arguments,” and as dependent upon a “fierce commitment to virtues … such as integrity and honor and fair play and courage.”

A few minutes ago, I quoted Professor Morrison’s observation about the importance of “encounters and collaborations” with people from “other neighborhoods” and “other lands.” To that list, one might add encounters and collaborations with fundamentally different perspectives and opinions. Prizing “conscience above orthodoxy” cannot mean prizing our conscience over someone else’s orthodoxy. If we genuinely prize conscience over orthodoxy, we must not only tolerate but welcome reasoned arguments that challenge our own cherished opinions and viewpoints.  We must have the courage to state opinions even when they are unpopular in our own community. We must have the integrity to respect those who offer opinions that are unpopular with us.  And we must be willing to reassess our beliefs when confronted with persuasive evidence or arguments that point in new directions.

These energizing, transformational and sometimes difficult encounters take place in, and help to constitute, what Professor Morrison described as each person’s personal or private Princeton, made from their individual memories. Professor Morrison spoke of “friendships secured and endangered on greens and in classrooms, offices, eating clubs, [and] residences,” and of “stimulating rivalries negotiated in laboratories, lecture halls and sports arenas.” She observed that on this campus “[e]very doorway, every tree and turn is haunted by peals of laughter, murmurs of loyalty and love, tears of pleasure and sorrow and triumph.”

I like these passages from Professor Morrison’s speech because they acknowledge both the transformative character of education and how hard it can sometimes be. I hope that your time here will often be exhilarating, but I know that it will not always be easy. That’s more than okay; it is essential. You cannot really learn or grow if everything is always comfortable.  You will find here classmates, friends, mentors, and others who understand your experience, who share in it, and who are ready to help you when you need it.

All of you, in the great Class of 2023, are beginning already to build your own “personal Princeton.” My colleagues and I are excited that you are joining this community.  We know that you will infuse living energy into this place from, as Toni Morrison said, many neighborhoods and many lands. We know, too, that wherever you come from, each of you belongs here.  We are delighted to see you, and we take great joy in saying, “Welcome to Princeton!”