The Opening Exercises ceremony, held in the University Chapel on Sunday, Sept. 9, marks the start of the academic year at Princeton. After leaving the chapel, students pass through an archway recently named for James Collins Johnson, an escaped slave who had a long history on campus and in town. 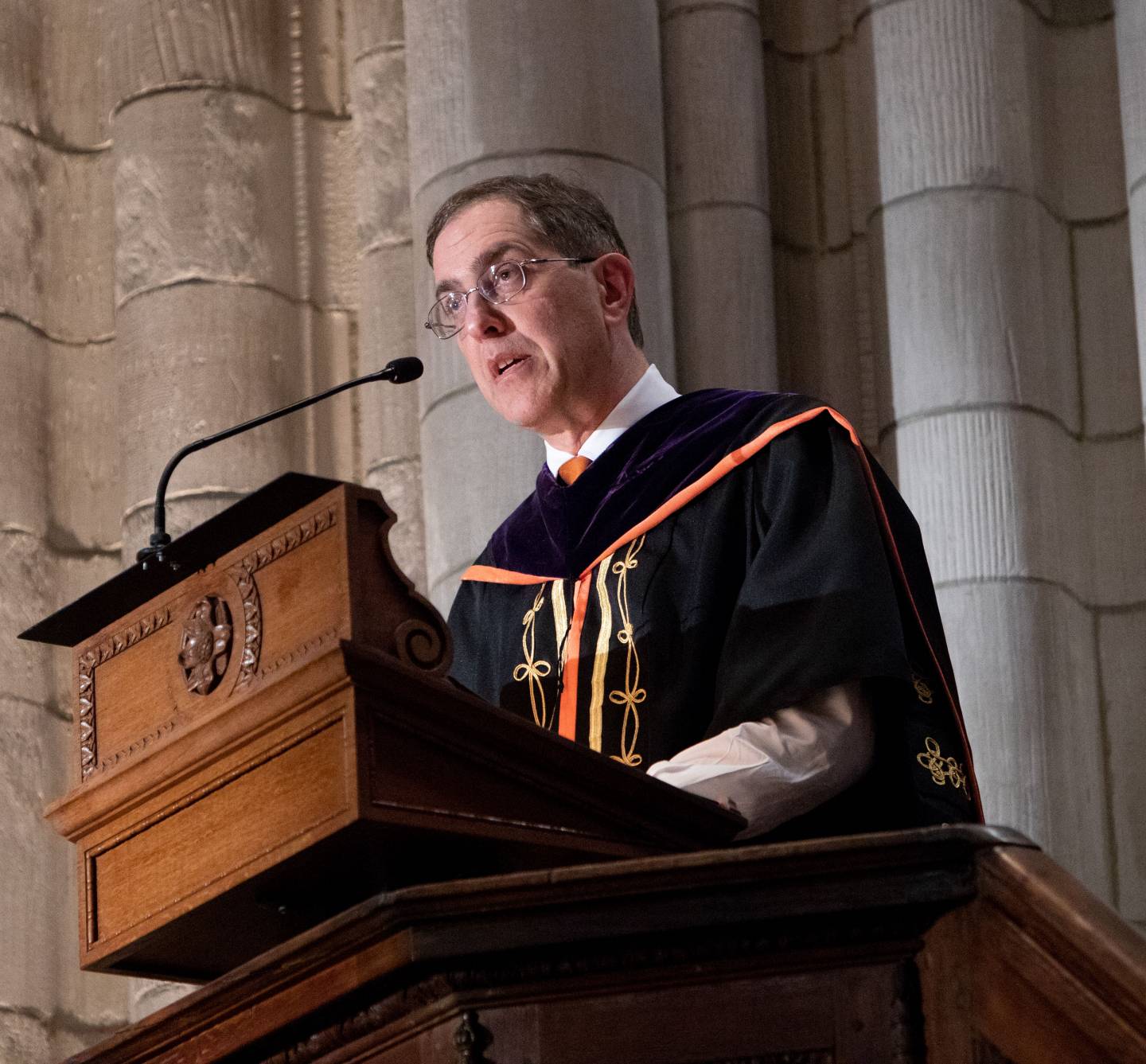 Eisgruber asked the Class of 2022 gathered in the University Chapel to join him in reflecting on “how fortunate we are to be on a campus of this kind — a campus that values the fearless pursuit of truth, cherishes the importance of service, and celebrates the dazzling diversity of identities, cultures, faiths and backgrounds that form the rich tapestry of our community.”

Opening Exercises, which dates to at least 1802, inaugurates the new academic year. The interfaith ceremony features the president’s address as well as hymns, readings, prayers and the awarding of undergraduate academic prizes. Classes begin on Wednesday, Sept. 12.

After a week of Orientation activities, members of the Class of 2022 entered the chapel on a rainy afternoon wearing T-shirts representing their colleges. The new students filled the pews, followed by faculty members, trustees and administrators in academic regalia. African drum beats thumped as colorful kites swirled above. Following the ceremony, the students processed out to the front campus through an archway recently named for James Collins Johnson, an escaped slave who had a long history on campus and in town.

Eisgruber began his address with a reference to the Pre-read book he asked the incoming students to read, “Speak Freely” by Princeton politics professor Keith Whittington, noting that it “invites us to focus on the values that define research universities like this one.”

Eisgruber said: “Free speech is one of those values. The commitment to truth-seeking is, as Professor Whittington says, another, even more fundamental value.

“In the 21st-century United States, we have become so accustomed to the idea of a research university that we rarely think about how genuinely astonishing it is to have these strong, durable truth-seeking institutions in our society,” he said.

As they start the new school year, the students are “about to invest in this truth-seeking institution,” he said, through their time, effort, talent and character.

“What you get out of this place depends on what you put into it,” said Eisgruber. He urged the students to be “makers, not consumers of your education.” He invited them to take the “opportunity to read extraordinary books, to meet and get to know spectacular professors, to receive demanding criticism that makes you dissatisfied with what you have done and pushes you to new levels of creativity and rigor.” 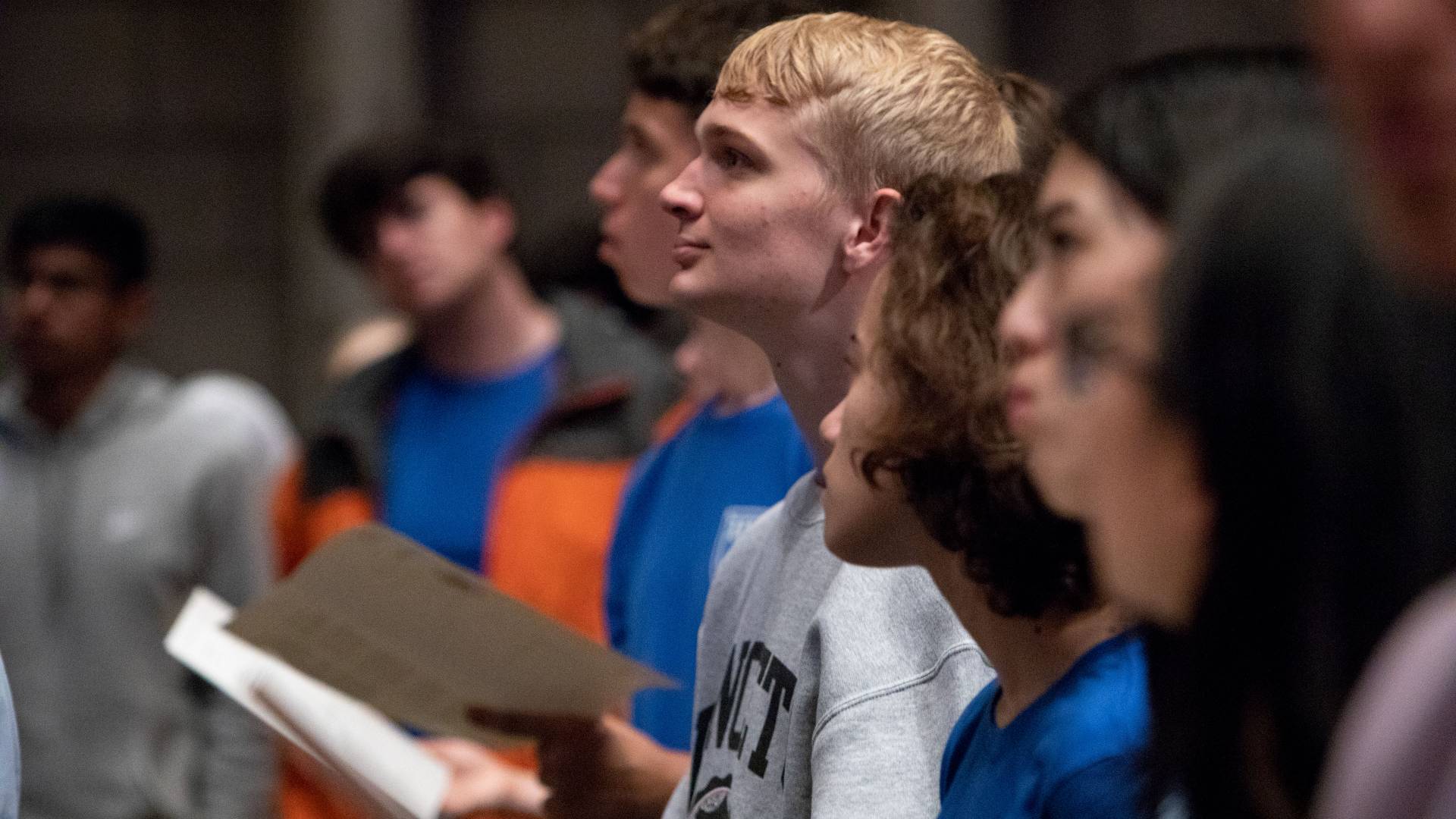 Students listen to the readings as they gather at the ceremony before starting classes on Wednesday, Sept. 12.

In seeking a liberal arts education instead of one focused on technical skills, Eisgruber surmised that the students likely at some point will complain that Princeton should teach “more practical things” and “wonder why our courses so often focus on big, theoretical ideas, rather than the brass tacks of whatever vocation you hope to pursue.”

Eisgruber offered a response. “I believe that the best answer to that question rests at least in part on what I call the ‘miracle of beautiful ideas.’

“I mean that by some feature of our humanity or our cosmos, it turns out that one of the most genuinely practical things that you can do is to study the most beautiful, profound, ambitious and challenging questions that you can find,” he said.

Turing’s ideas, Eisgruber explained, enabled him to crack Nazi codes and save millions of lives. More broadly, they laid the foundation for the digital revolution. “Many of the things that all of you consider enormously ‘practical’ today exist by virtue of Alan Turing’s commitment to study beautiful, impractical things nearly a century ago,” he said.

Eisgruber added that the students also will discover that “exploring humanity’s deepest ideas” while on campus will prepare them to learn throughout their lives. “That capacity for lifelong learning is intensely practical for many reasons, not least because many of the questions and circumstances that will confront the world when you are in your prime — when society will depend on you to lead — are impossible to anticipate today.” 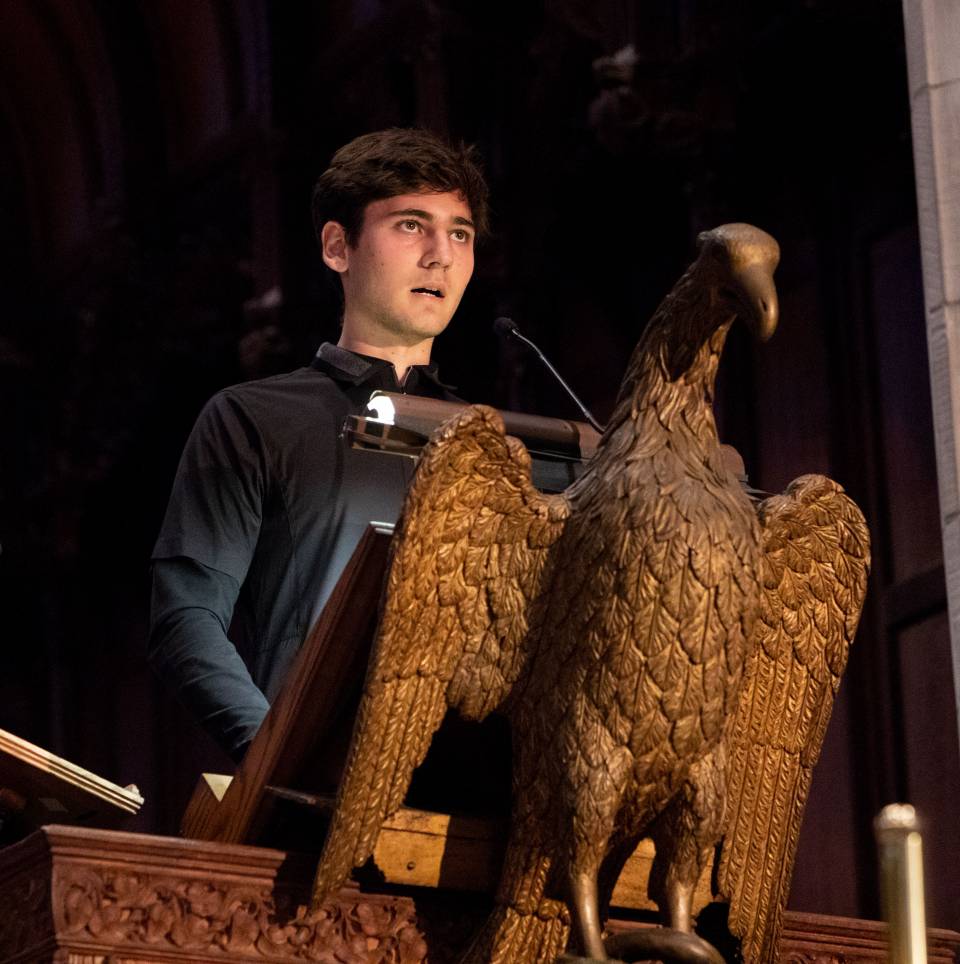 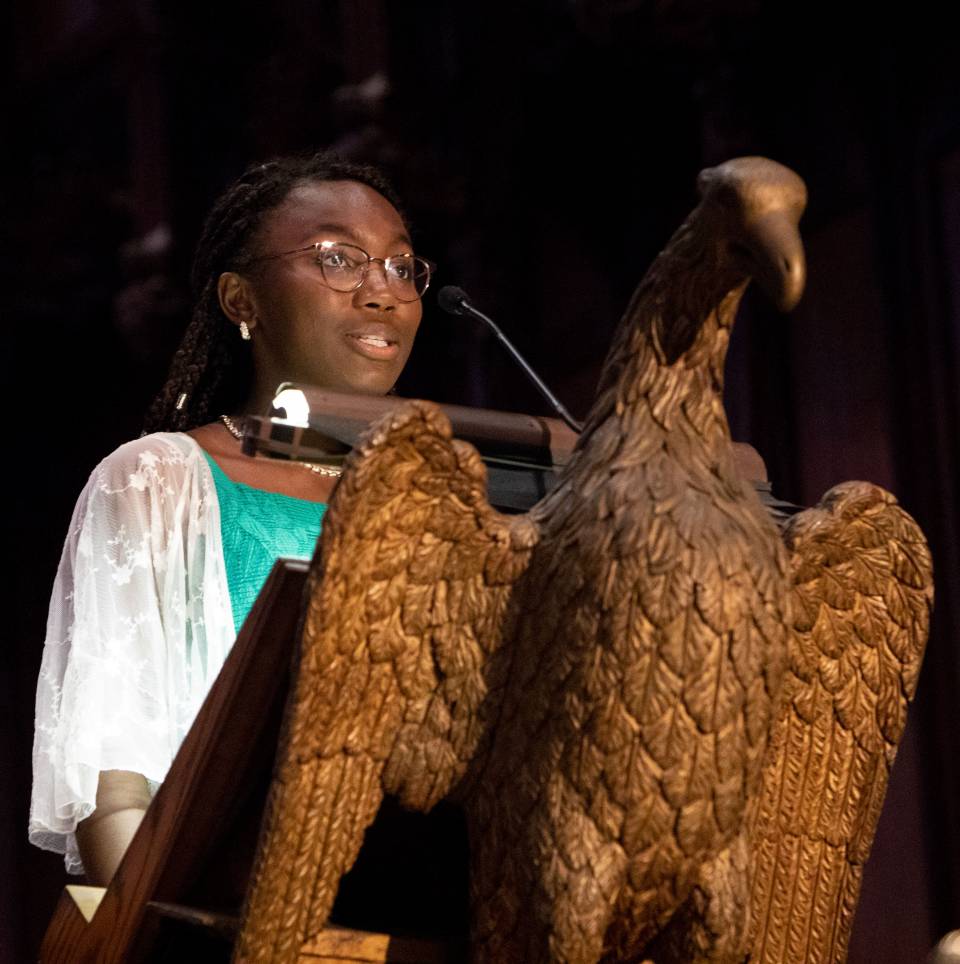 Opening Exercises includes music, prayers and readings from various traditions. Hamza Hashem, a member of the Class of 2021, gives a reading from the Quran.

Katherine Powell, Class of 2020, reads from the Bible.

Returning to the question of values, Eisgruber said, “How you learn is just as important as what you learn.

“To make your own education in a truth-seeking community like this one, you must embrace and exemplify certain demanding values.”

Eisgruber said one of those values is honesty. “In a community dedicated to truth-telling, it is essential that we be truthful about what we believe and why we believe it,” he said. 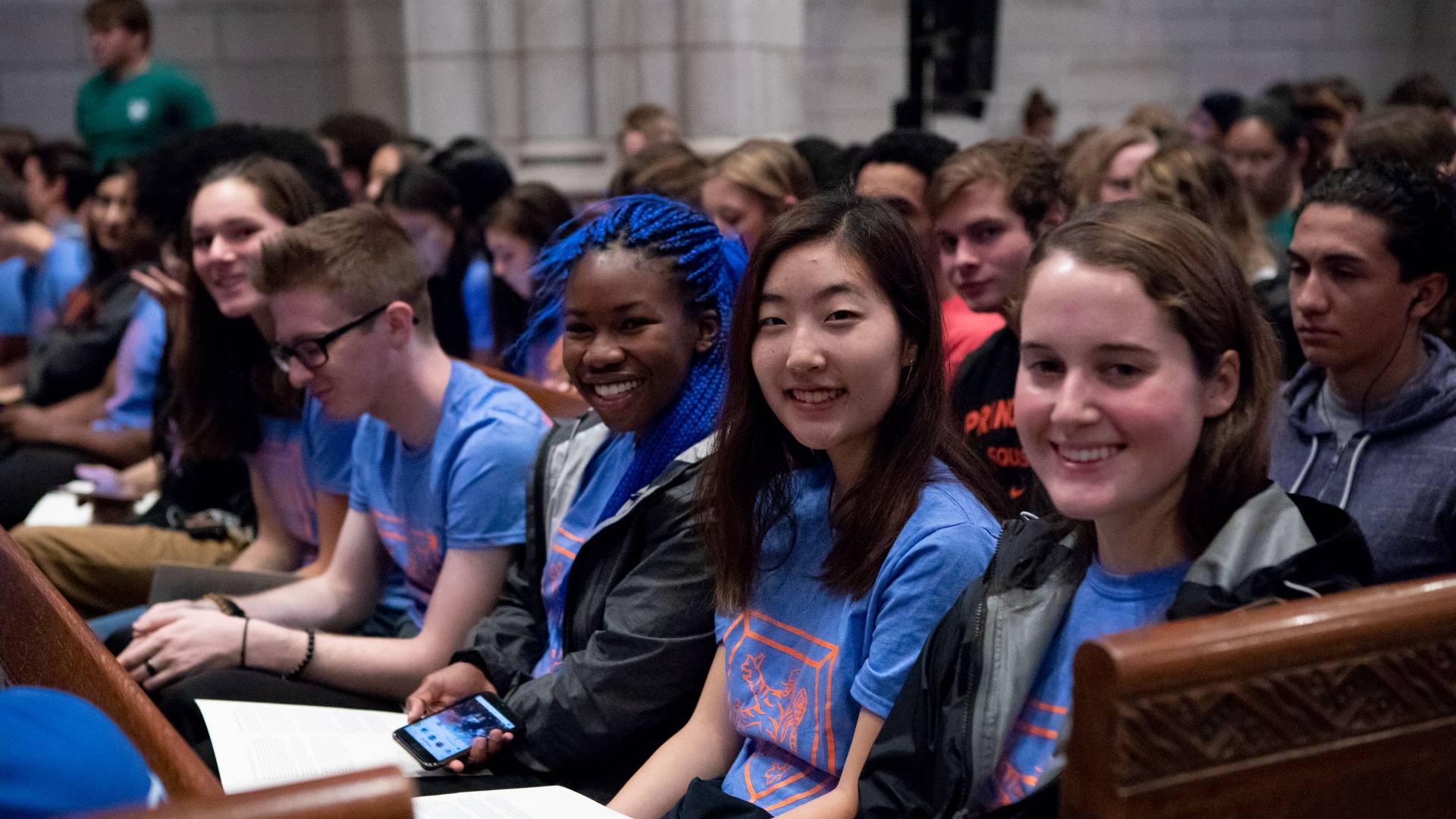 Another value is respect. “To pursue truth effectively, we need others to respect the hypotheses and opinions that we offer, and, by the same token, we must respect the ideas and perspectives of those around us,” Eisgruber said.

“These values demand your active engagement — you must recommit yourself to them throughout your time at Princeton,” he added.

Such values also are integral to the larger University community.

“The values of our truth-seeking enterprise permeate the life of this campus, and we endeavor continuously to be more faithful to our aspirations,” Eisgruber said.

As the students walk out of the chapel, the first archway they pass through — the easternmost arch of East Pyne Hall — will illustrate that message, Eisgruber said.

In the spring, the archway was named for James Collins Johnson, a former slave who worked on campus for more than 60 years until his death in 1902. Johnson’s story emerged in part through the multi-year Princeton and Slavery Project led by Princeton historian Martha Sandweiss.

Eisgruber said: “In my view, the Johnson archway exemplifies several of the values that together make up our truth-seeking enterprise: the need for careful inquiry into difficult and sensitive topics, including uncomfortable questions about this University’s past; honesty, not only in research methods but also in this University’s account of its identity; and respect, for the extraordinary diversity of people who have contributed and contribute today to this extraordinary community.”

In closing, Eisgruber said: “We are so delighted that you are here, and we look forward to the contributions that you will make to this community in the years to come. Welcome to Princeton!”

After leaving the chapel and passing through the Johnson archway, Princeton’s newest class participated in the traditional Pre-rade, where they were cheered on by other students, alumni, faculty and staff as they symbolically entered the front campus through the FitzRandolph Gate. 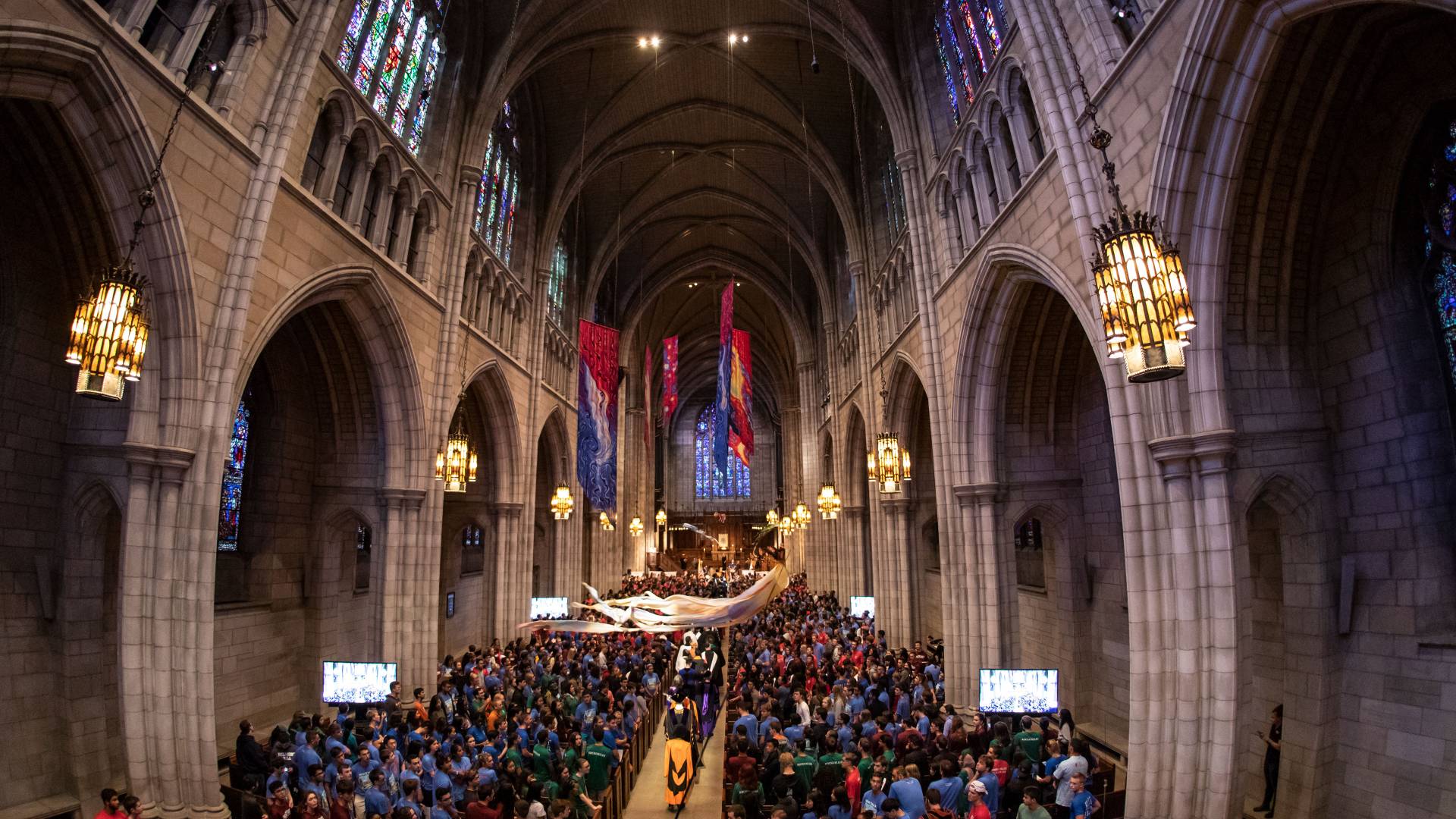 This view of the chapel ceremony was shot through a fisheye lens. 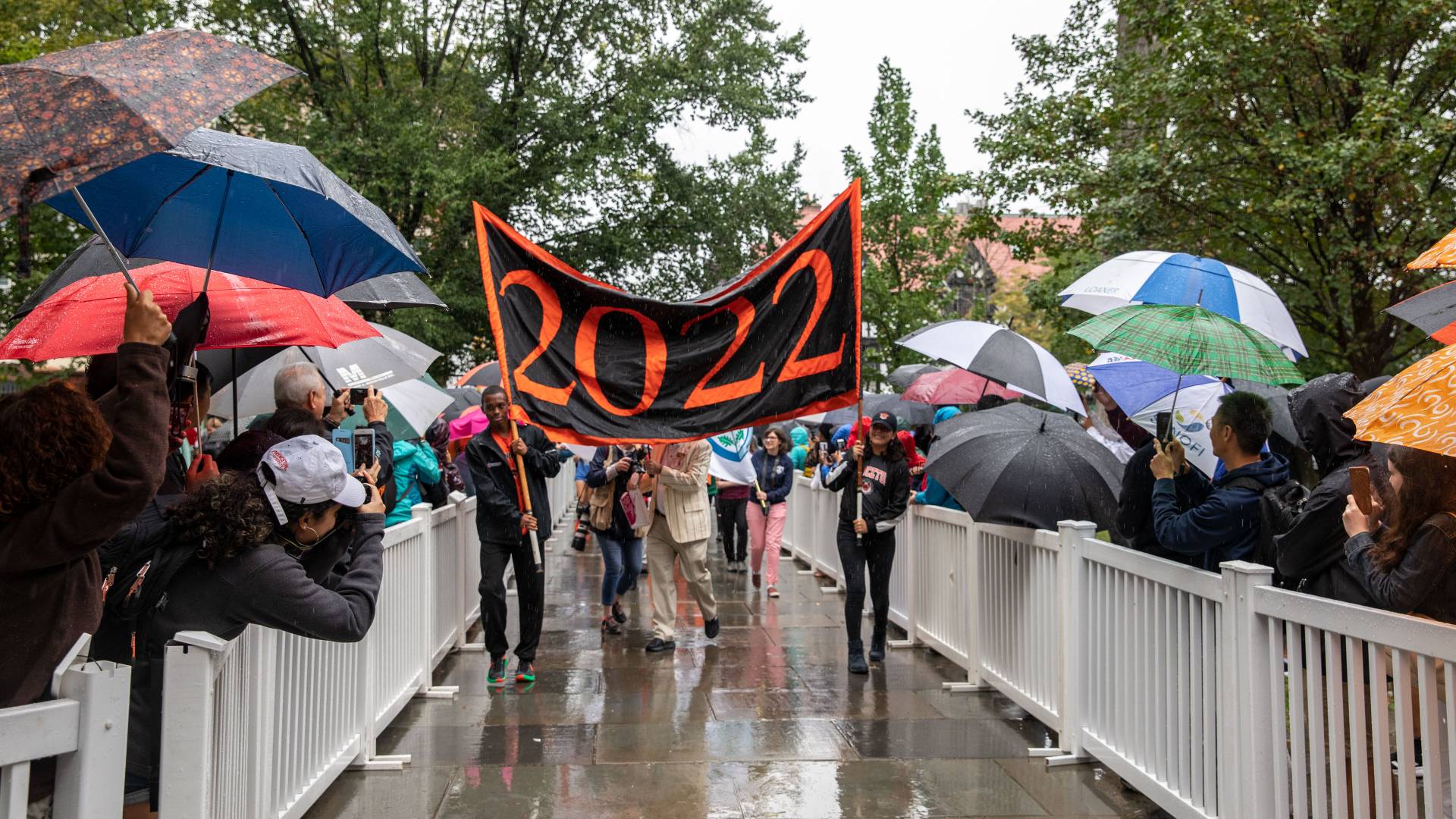 The Class of 2022 banner leads the Pre-rade through the gauntlet of students, alumni, parents and friends who gathered in front of Nassau Hall to cheer on the first-year students who came through FitzRandolph Gate. 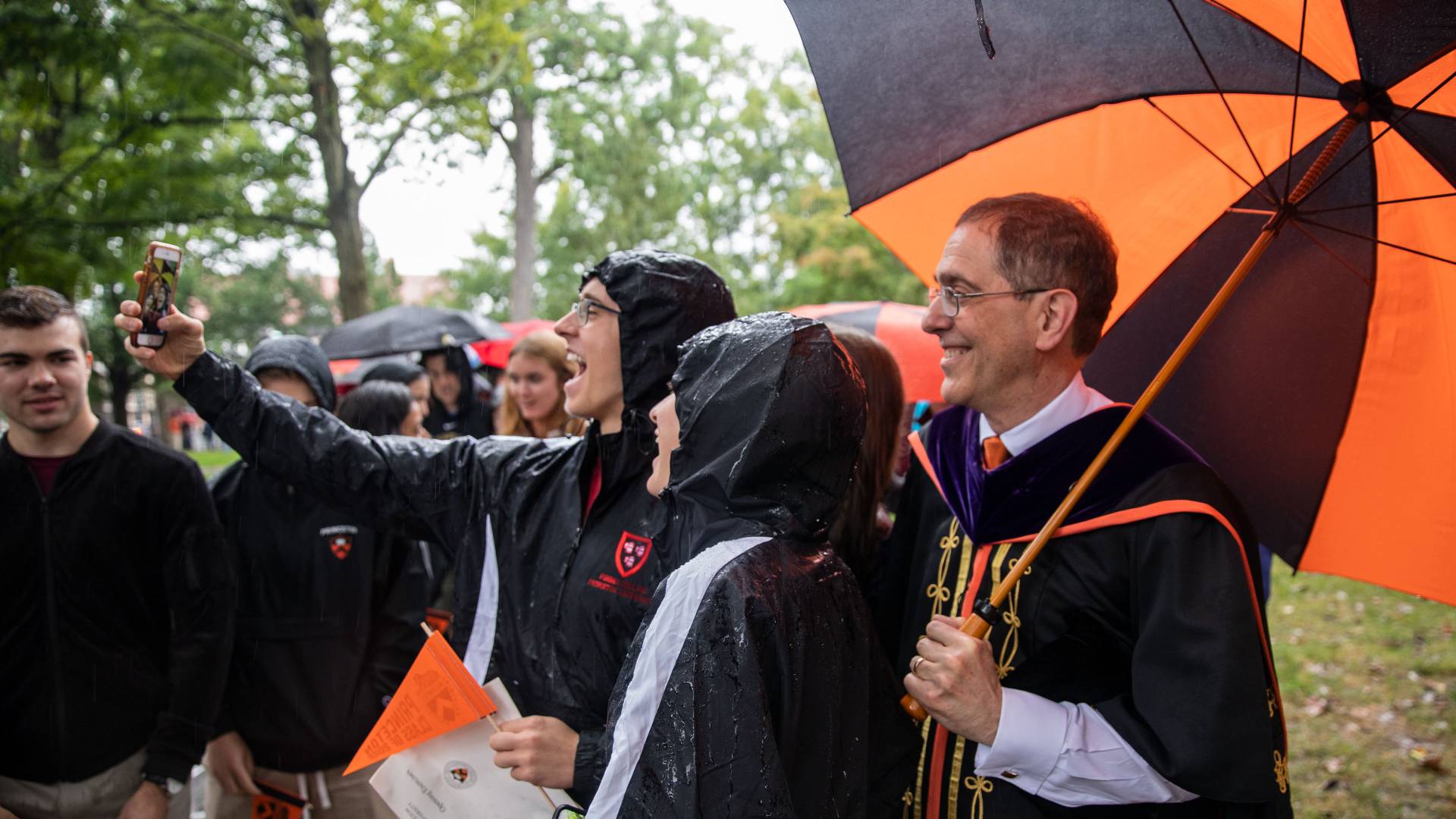 Two students stop along the Pre-rade route on front campus to snap a selfie with President Eisgruber. 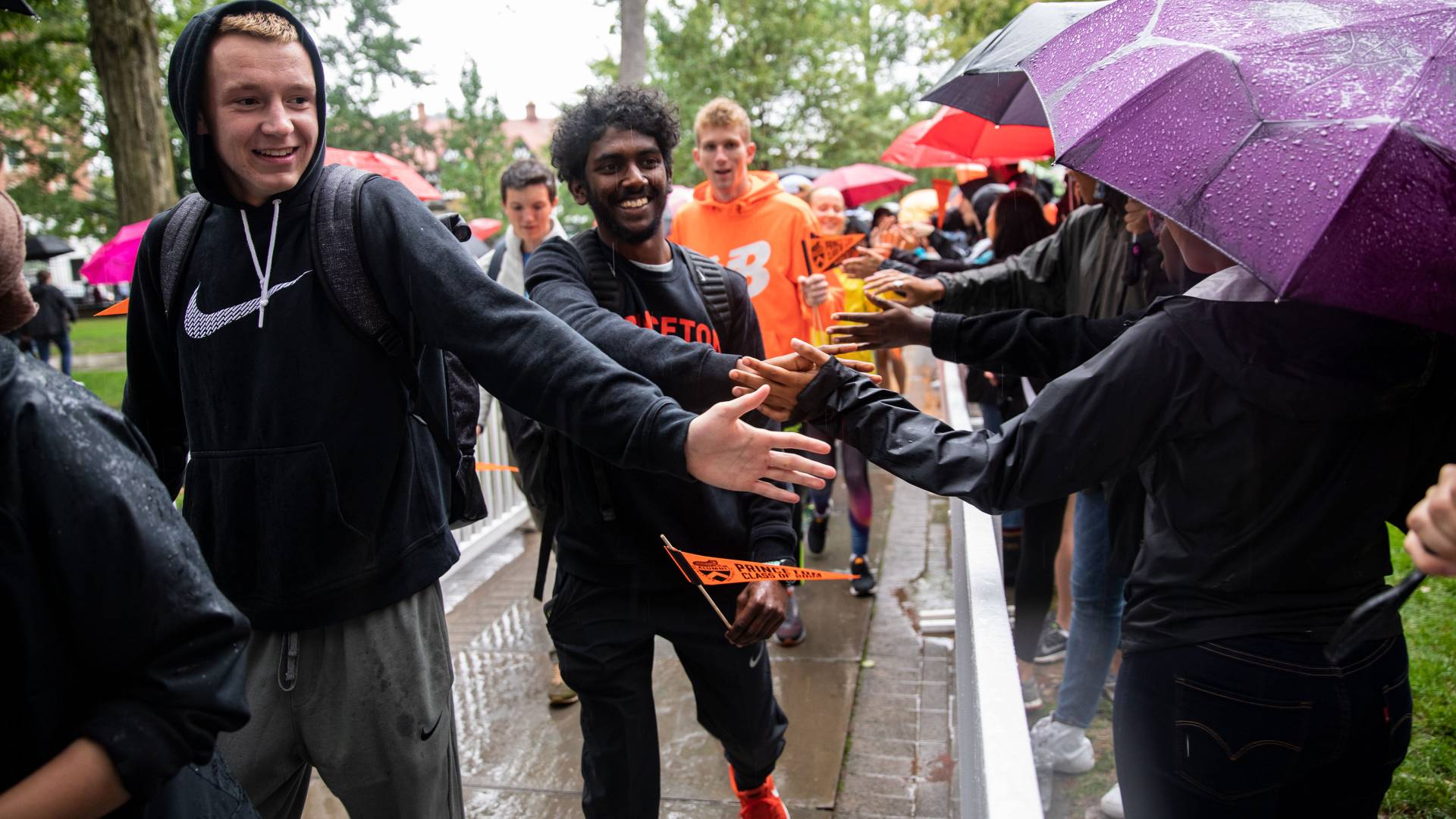 High fives and umbrellas were the order of the day as first-year students processed along the walkways in front of Nassau Hall during the Pre-rade.