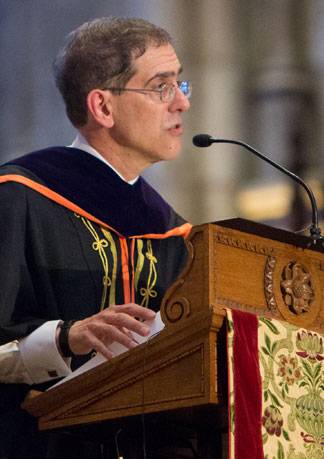 Princeton President Christopher L. Eisgruber welcomed the Class of 2020 to the University during Opening Exercises on Sunday, Sept. 11. As first-year students start a new school year in a new community of students, faculty and staff, Eisgruber encouraged them to consider that "we're all in it together." 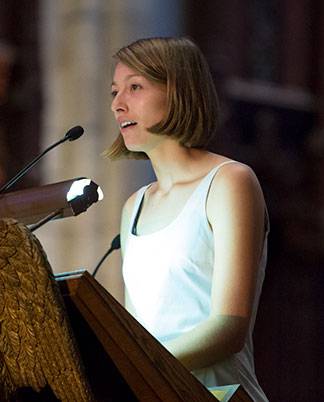 Opening Exercises included music, prayers and readings from various religious and philosophical traditions. Karen Gallagher-Teske, a member of the Class of 2018, reads a poem by Mary Oliver as part of the ceremony. 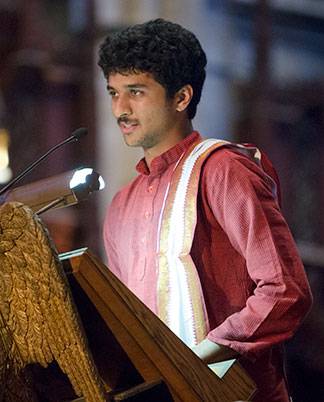 Siddhartha Jayanti, a member of the Class of 2017, reads from a Hindu text.

Stressing a theme of community, Princeton President Christopher L. Eisgruber welcomed the Class of 2020 to the University on Sunday, Sept. 11, during Opening Exercises marking the start of the academic year.

"Those of you who begin your undergraduate or graduate careers today, or who enter the ranks of the staff and the faculty, have joined a community," Eisgruber said. "Our destinies are linked to one another in myriad ways — not just for the years that you spend on this campus, but long beyond them. Being a Princetonian is now — was from the day that you accepted your offer of admission, really — a part of your identity." 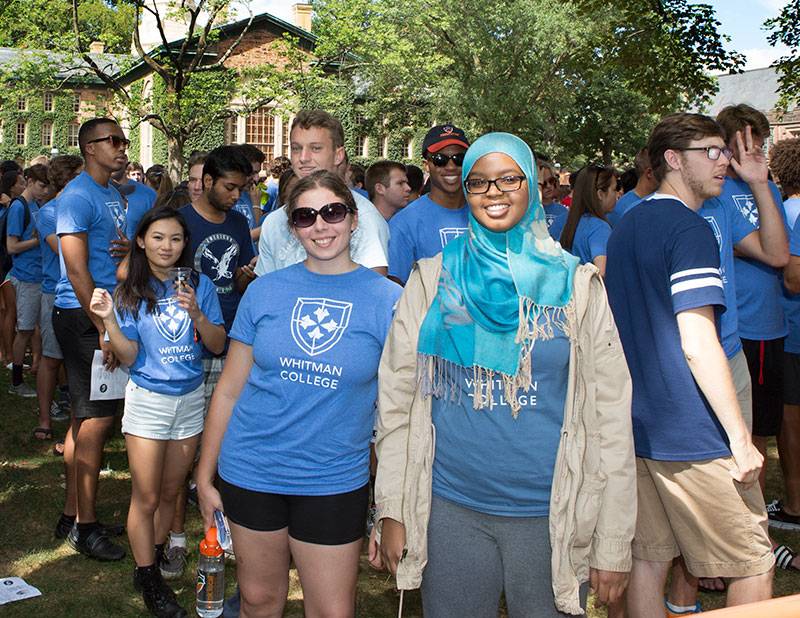 With Nassau Hall in the background, Whitman College students gathered on Cannon Green ahead of the procession into University Chapel.

After a week of Orientation activities, first-year students wearing shirts representing their residential colleges gathered for the event in the University Chapel. The interfaith ceremony, a tradition dating to at least 1802, includes the first-year class as well as other undergraduates, graduate students, faculty and staff. Classes begin on Wednesday, Sept. 14.

"Today you join the ranks of students who have left their marks on the Princeton campus — and the world — for generations through their intellect, creativity and passion," Eisgruber said. He called the 1,306 first-year students an "extraordinarily accomplished and diverse" group, hailing from 48 states and 53 countries besides the United States.

In addition to Eisgruber's address, Opening Exercises included music, prayers and readings from various religious and philosophical traditions. Undergraduate students also were recognized for their academic achievements during the previous year.

While the event featured festive celebration, such as the processional into the chapel followed by students waving colorful kites and African drum music, this year's ceremony also included somber reflection.

"September is an ebullient time on college campuses. … It is, by its very nature, a season of fresh starts and high expectations. It is a season of optimism," Eisgruber said. "This afternoon, however, we gather not in a season of carefree high spirits, but in the closing weeks of a summer stained by violence, sorrow and loss. We gather, moreover, on a date — September 11th — forever marked as a tragic day in American history."

Eisgruber then noted cities in the United States and abroad that were the sites of mass shootings and acts of terrorism this summer, asking the audience to join him in a moment of silence. 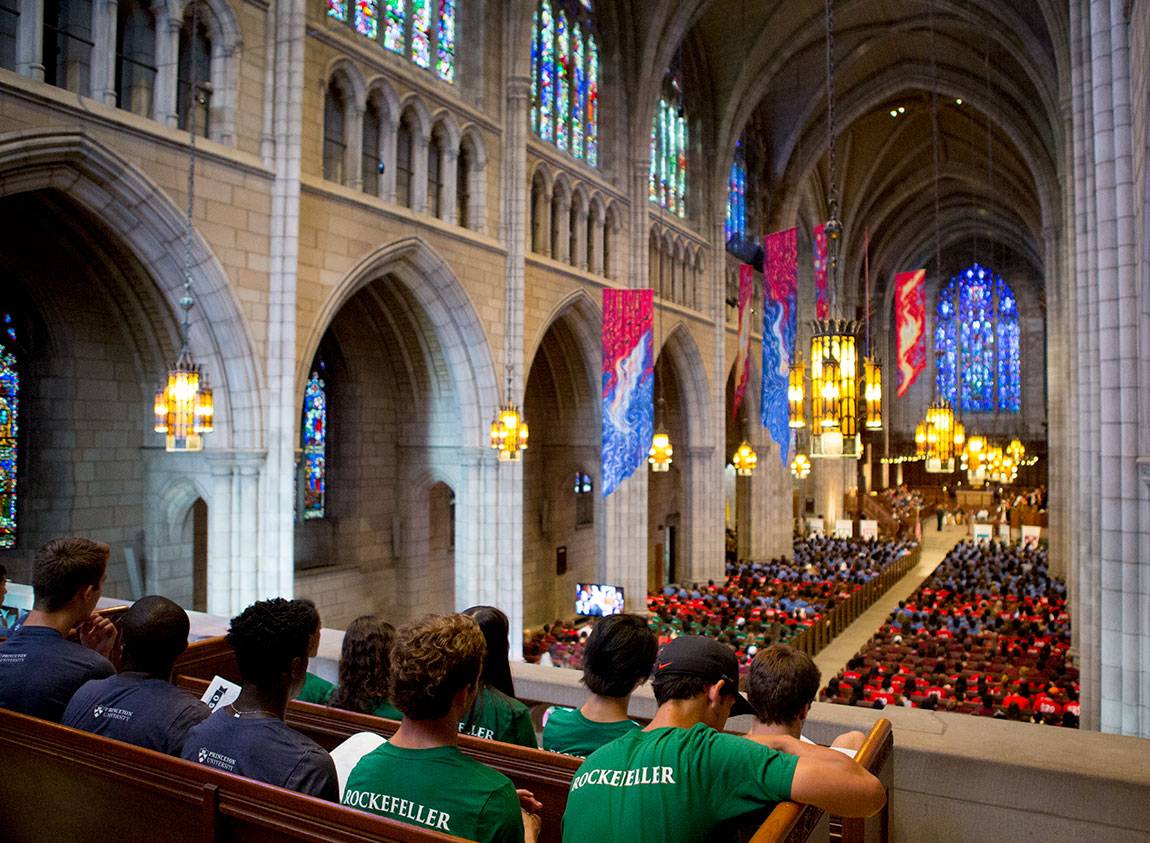 First-year students seated in the balcony look out on the University Chapel during Opening Exercises. This year's ceremony featured festive celebration as well as somber reflection.

As students start a new school year, Eisgruber said he understands if they also might be grappling with the question, "What does it mean to be a college student when the course of human events seems so frenzied and tumultuous?"

For possible answers, Eisgruber turned to the Pre-read book he asked the incoming class to read, "Our Declaration: A Reading of the Declaration of Independence in the Defense of Equality" by Danielle Allen. A member of Princeton's Class of 1993, Allen is director of the Edmond J. Safra Center for Ethics and professor in the Department of Government and in the Graduate School of Education at Harvard University.

"[Allen] offers you wisdom relevant to the question that I just posed, about what it means to be a college student — or, for that matter, a decent and conscientious person of any kind — in moments that are difficult and unsettled," Eisgruber said.

Focusing on the phrase "the course of human events" in the first line of the Declaration of Independence, Eisgruber noted Allen's observation that course is another word for river.

"Right now the course of human events pulls hard upon us, sweeping us along on treacherous tides. It sometimes feels like we're working hard just to come up for air and grab a breath," he said.

To navigate the turbulent stream of life, Eisgruber encouraged students to consider that "we're all in it together."

"Professor Allen reminds us that the people who wrote the Declaration of Independence shared an identity, too. They claimed to be one people," he said. "They did not all agree with or like one another. … But being a people meant that they were in it together, they were in a deep sense stuck with one another, or, to put it in loftier terms, they shared a common destiny."

And in a very different time and place, students in the Class of 2020 similarly share a common bond. 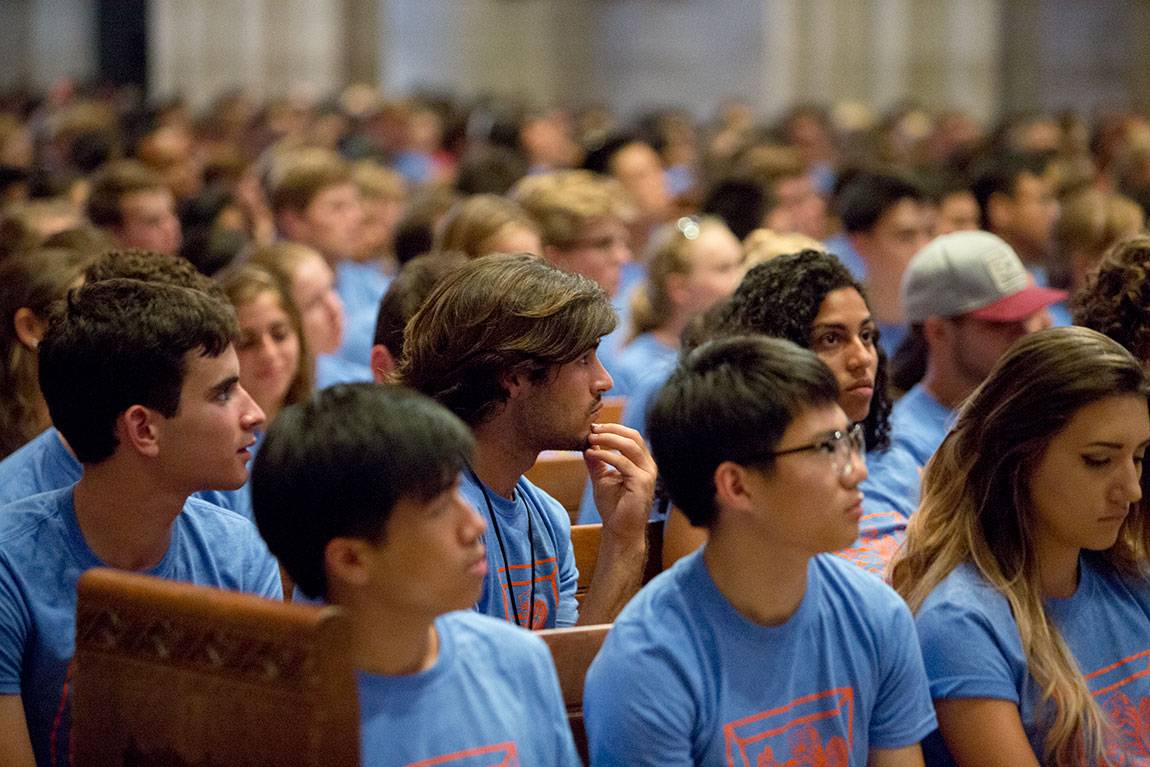 Students from Wilson College listen to Eisgruber's address during the Opening Exercises ceremony marking the start of the academic year.

"Those of us who gather in this chapel today will, for the next few years at least, move through the course of human events together," Eisgruber said. "We can learn from one another, if we listen. We will do better if we look out for one another — if we remember, in other words, that even if things seem to be going fine for us personally, they may be going badly for someone else near to us — and, if so, we owe that person our help and support."

He added: "We can also make a greater difference beyond our campus, and do more to help communities less fortunate than our own, if we work together. That is what I mean when I say that we are a community, and that we navigate this river, this course of human events, collectively."

To help them along as they navigate, Eisgruber advised students to learn about the past and to explore new terrain.

"To discern the shape of a river, it helps to know something about where it comes from — which means knowing something about the course of human history," Eisgruber said. "Giving you this knowledge and capacity, this sense of the human, this perspective and vision, is the most fundamental purpose of liberal arts education in general, and of your Princeton education in particular."

At the same time, students should have the freedom during their time at Princeton to grow and develop and to encounter different perspectives and enjoy new experiences, he added.

Eisgruber concluded: "You owe that freedom to yourself, because you need to prepare for the journey to come. … We need you to fortify your mind and your character now so that you can help us to confront what the world will throw at us in the future, for we are all, and we will all remain, in this together." 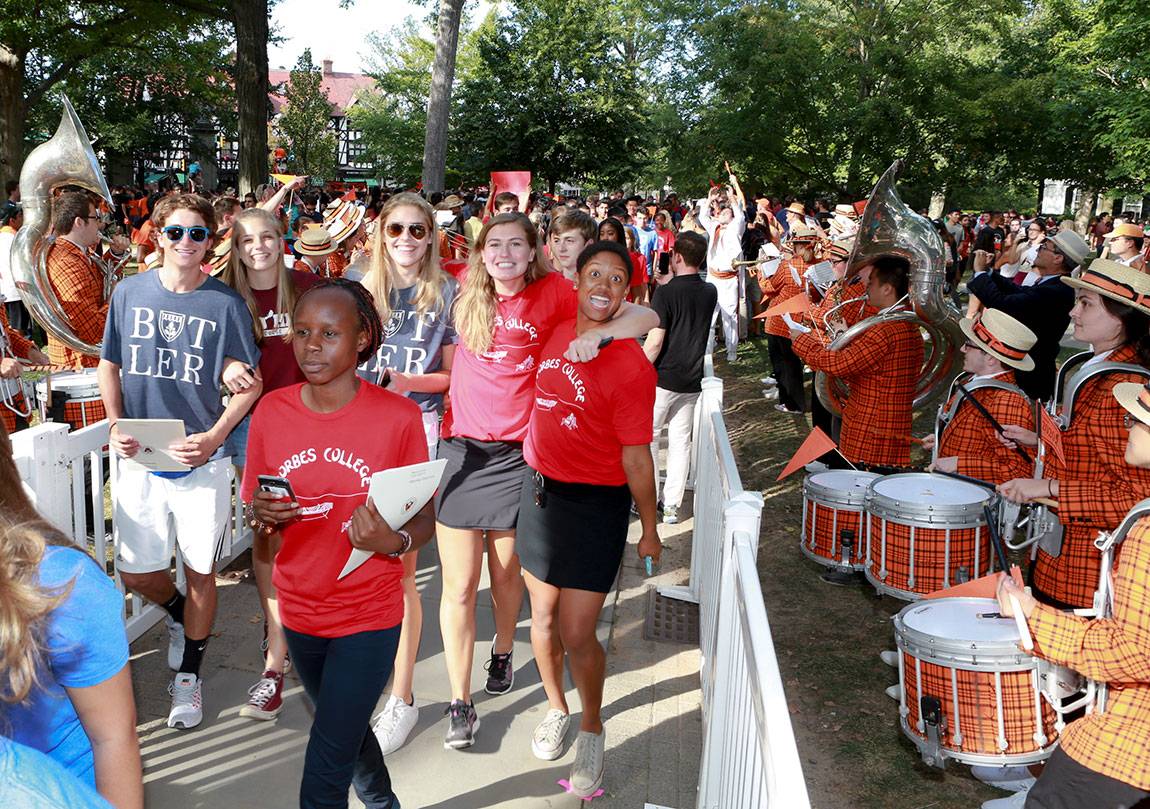 Flanked by the Princeton University Band, first-year students paraded on a diagonal across the lawn in front of Nassau Hall. The students later took part in a step sing and the annual freshman assembly.

Following the ceremony, first-year students exited the chapel and participated in the "Pre-rade," a parade through FitzRandolph Gate at the front of campus, where they were cheered on by other students, alumni, faculty and staff. In the evening, students attended the freshman assembly to further discuss the Pre-read book with the author. Eisgruber also will lead small group conversations about the book with students throughout the academic year.

The Opening Exercises ceremony was videotaped and will be archived online for later viewing. More photos from the ceremony and Pre-rade also are available on the University's Facebook page.

Incoming Mathey College student Olivia Foster gets an enthusiastic high five from one of the several hundred people who lined the Pre-rade route in front of Nassau Hall. In the background is FitzRandolph Gate, which the Class of 2020 will next formally pass through at their Commencement.

Students holding the Class of 2020 banner lead the Pre-rade through the walkway in front of Nassau Hall, followed by students carrying the gonfalons of the University's residential colleges.