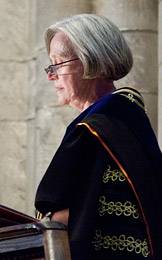 Opening Exercises marks the beginning of the academic year with music, student awards, readings from religious and philosophical traditions, and an address by President Shirley M. Tilghman. Above, Tilghman appeals to students to apply the University's educational offerings to better themselves and the world around them.

Citing the Occupy movement that called for greater economic equality, Princeton President Shirley M. Tilghman asked students at Opening Exercises Sunday, Sept. 9, to use the protests as inspiration for spending their time at the University bettering themselves and the world at large.

"Now don't panic — I don't mean to suggest that you are going to live in a soggy pup tent on Cannon Green for the next four years," Tilghman said in her address. "Instead, I am co-opting that phrase from last year's political season to preview what I hope will be the many ways in which you will seize the moment, take this University by storm, make it uniquely your own and leave it better than you found it."

Along with making the most of opportunities on campus and around the world, students should direct their Princeton education, and its associated privileges, to a purpose greater than themselves, she said. 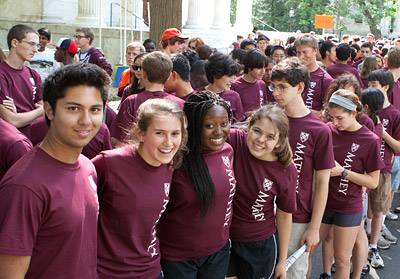 Residents of Mathey College, one of the University's six residential colleges, eagerly await the start of Opening Exercises.

The new students and their families — joined by new and returning graduate students, other undergraduates, faculty and staff — filled the University Chapel and two simulcast sites for the interfaith service that traditionally marks the start of each academic year. Classes begin on Thursday, Sept. 13. 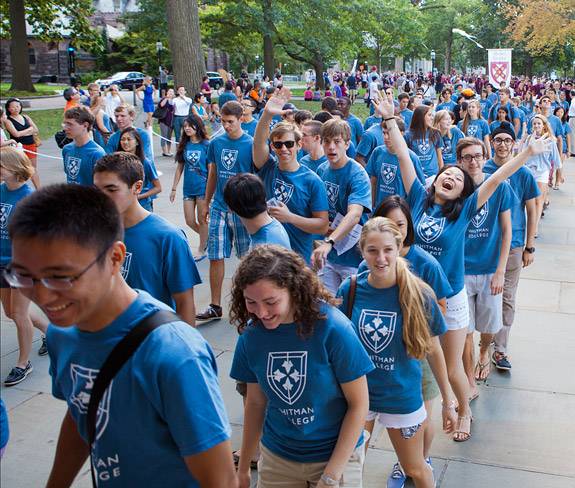 Members of the Class of 2016 entered the chapel with other students in their respective residential colleges. Each group was led by a student carrying a colorful banner bearing the college shield, as the students preceded faculty members and administrators in academic regalia. The procession followed African drummers and kite-bearers waving colorful pieces of cloth on long poles. 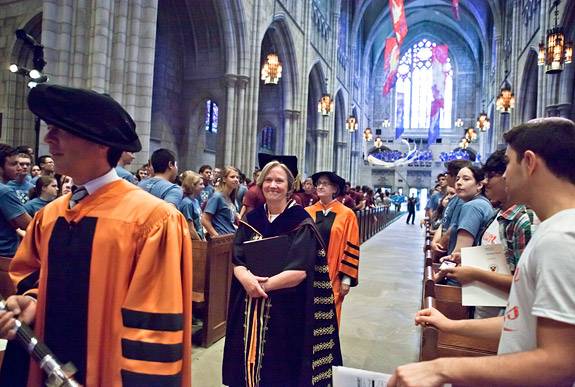 Mace bearer Jeff Nunokawa (left), a professor of English, and President Tilghman (center) enter the chapel as freshmen look on.

The ceremony began with a welcome from Tilghman to the new and returning members of the University community. She noted that the 1,357 new members of the Class of 2016 come to Princeton from 48 states, plus Washington, D.C., and 57 countries, and that both the new undergraduates and the 615 new graduate students hail from six of the seven continents — "proof positive that Princeton is truly a global university."

In her remarks, Tilghman laid out multiple explanations for how the new students could "Occupy Princeton," starting with students' varied reasons for choosing to come to the University, including the beauty of the campus; an intellectual environment that includes a diverse range of academic opportunities, the senior thesis requirement and the chance to work closely with faculty members; and well-supported extracurricular groups — as well as many options yet to be explored.

"Each Princeton experience is forged from a highly individual spectrum of interests, talents, initiative, focus and, yes, serendipity. Luck matters," Tilghman said. "The roommates you are randomly assigned, the conversations you happen upon in the dining halls, the preceptor who takes a special interest in your work, the play you decide to audition for on a whim — who knows what will turn out to be a revelatory moment in your Princeton experience?" 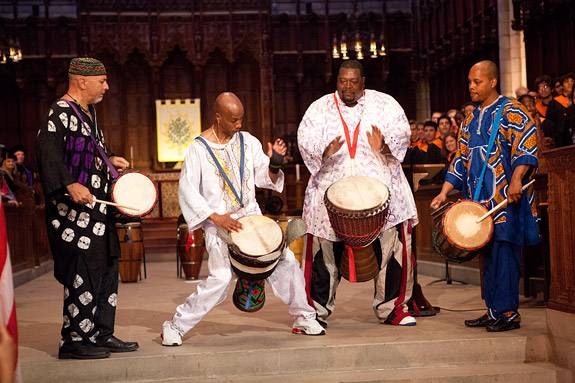 African drum music plays as the procession — made up of the choir, faculty and administrators — comes into the chapel.

Princeton students have limitless opportunities, but only a limited time to take advantage of them, she said, so they must sample their options while keeping their futures, goals and time in mind. She quoted the 19th-century French scientist Louis Pasteur, who said, "Chance favors only the prepared mind."

"With a prepared mind, you can leave your mark on Princeton by the ways in which you choose to spend your time and engage with your classmates and fellow students," Tilghman said.

She also encouraged students to occupy Princeton by embracing its philosophy of global learning — studying nations, cultures and languages on campus and through immersion abroad. She cited Global Seminars that took place this summer in Rio de Janeiro and Athens, and students who interned in Stockholm, Instanbul and Kampala, Uganda.

"Whether you describe the world as flat, or shrinking, or massively interconnected, it has profoundly changed, and modern well-educated citizens need to be cosmopolitans — a word that Professor of Philosophy Anthony Appiah has used to describe a person who is genuinely familiar with and at ease moving between cultures, without losing sense of his or her own identity," Tilghman said. 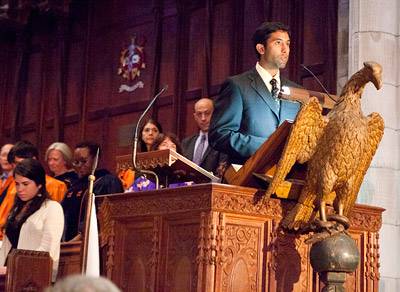 During the interfaith ceremony, senior Kanwal Matharu reads a Sikh blessing amidst other readings from the Christian, Hindu, humanist, Jewish and Muslim traditions.

Finally, Tilghman turned to the Occupy movement that began last September in Zuccotti Park near Wall Street in New York City. Just as the protesters drew attention to the gap between the top 1 percent and the bottom 99 percent in income, Tilghman suggested that there is a similar gap in opportunity. She asked the new students to recognize that now, in joining the Princeton community, they are becoming part of the 1 percent in terms of future opportunity, irrespective of their backgrounds. In acknowledging that such a privilege carries broad responsibilities, Tilghman urged them to conduct themselves with the protesters' spirit and to embrace the University's informal motto of "Princeton in the Nation's Service and in the Service of All Nations."

"We are agnostic about what you choose to do, but we do insist that it have a purpose that is larger than you. In that sense, Occupying Princeton is not an end in itself but, rather, a means of preparing yourselves for many occupations — and vocations — in a world that sorely needs the skills and qualities of mind you bring to this University and will surely enhance over the next four years," Tilghman said.

After the ceremony, freshmen participated in the "pre-rade," a parade through the FitzRandolph Gate at the front of campus, where they were cheered on by other Princetonians as they officially began their undergraduate experience. 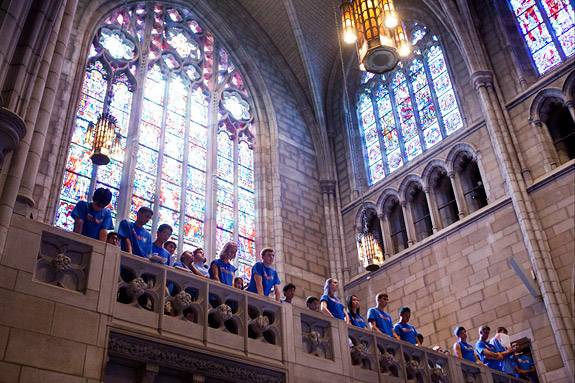 Members of the Class of 2016 — Princeton's largest to date, with 1,357 newly admitted students — fill the pews and balcony at Opening Exercises. 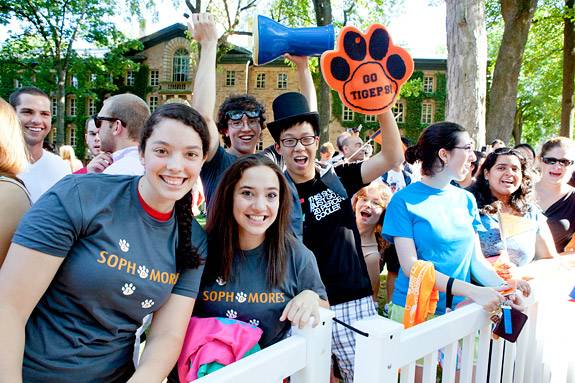 Upperclassmen, standing on the front lawn of Nassau Hall, welcome members of the Class of 2016 to campus at the "pre-rade." 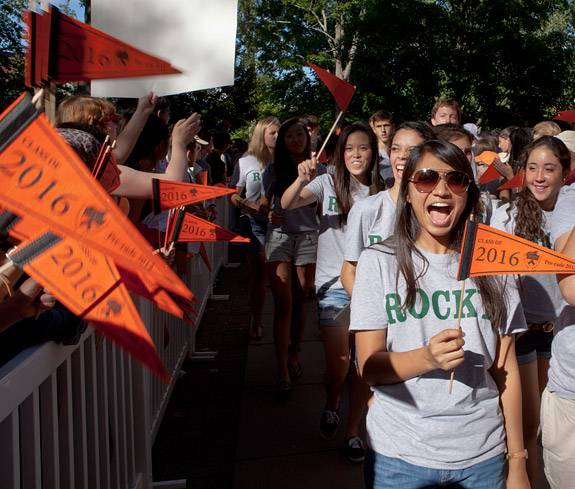 The newest members of Rockefeller College march in the "pre-rade," a parade through the FitzRandolph Gate at the front of campus, where they were cheered on by other Princetonians.