For the first time at this year's Opening Exercises, freshmen processed into the University Chapel by the residential college they have joined. Each group was led by the carrier of a colorful banner bearing the college's shield -- the Mathey College banner is visible in the midst of this crowd on Sunday, Sept. 7. The interfaith service traditionally marks the start of each academic year. Classes begin on Thursday, Sept. 11. (Photo: John Jameson) 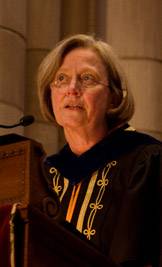 In her address, President Shirley M. Tilghman challenged the freshmen to take on as their first class project a voter registration drive with the goal of registering all eligible voters and making sure they cast their ballots on Election Day in November. (Photo: Brian Wilson) 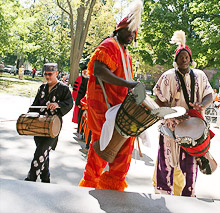 In this presidential election year, President Shirley M. Tilghman appealed to Princeton's newest students in her Opening Exercises address to become more engaged in the world around them.

"In fact, I would like to issue a challenge to the class of 2012 to take as its first class project the goal of registering every single eligible voter and ensuring that he or she votes on Election Day," she said in her speech on Sunday, Sept. 7, in the University Chapel.

"I issue this challenge with the full expectation that you will vote deliberately and thoughtfully -- avoiding the influences of the 30-second sound bite or the bloviations of the chattering classes, and disregarding the irrelevancies of the color of a candidate's tie or his backdrop on TV," Tilghman continued. "I urge you to approach your choice the way you will approach your Princeton education -- by taking time to learn about the records of the candidates and their positions on substantive issues, and their vision for the future of America and its place in the world, and by debating the issues with your classmates, with those who agree with you and especially those who do not. Listen, learn, deliberate and then, in an act of engaged and responsible citizenship that embodies the spirit of ancient Athens and revolutionary America, vote." 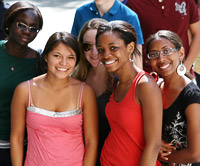 New students sat with other members of their residential colleges, cheering when one of their own was announced as an academic award winner. (Photo: Brian Wilson)

The new students and their families, as well as new and returning graduate students, other undergraduates, faculty and staff, filled the chapel and two simulcast sites for the interfaith service that traditionally marks the start of each academic year. Classes begin on Thursday, Sept. 11.

For the first time at this year's ceremony, freshmen processed into the chapel by the residential college they have joined. Each group was led by the carrier of a colorful banner bearing the college's shield. The students preceded the procession of faculty members and administrators in academic regalia led by African drummers and people flying kites on long poles.

In addition to Tilghman's address, the event included the recognition of undergraduate students for their academic achievements during the previous year.

Tilghman began the ceremony by welcoming new and returning members of the University community. Focusing on the new undergraduates during her address, she first called for a moment of reflection.

She drew attention to a quote painted on the walls of the Frist Campus Center from two-time presidential candidate Adlai Stevenson, a 1922 Princeton alumnus, who was addressing the class of 1954 at the time: "Before you leave, remember why you came." 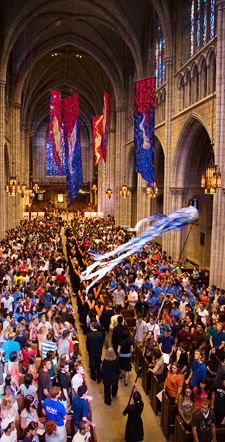 The class of 2012 filled the chapel as the rest of the participants in the ceremony filed in. People flew kites on long poles overhead. (Photo: John Jameson)

"We're preparing you to be responsible and engaged citizens of your own country and of the world," she said.

As citizens in the 21st century, they will be dealing with enormous challenges, Tilghman told the freshmen, "from the nature of democracy itself, and whether its principles are universal and can be exported to other nations; to the potentially devastating impact of global climate change, brought on by a century of indiscriminate burning of fossil fuels; to the growing gap between rich and poor nations and the peoples within them; to the profound impact of religious intolerance and ethnic hatreds on our global security.

"Each of these challenges, and others like them, pose difficult and complex choices that defy simplistic or jingoistic answers," she said. "For the next four years you will be developing the knowledge and understanding, the mental agility coupled with the habits of critical thinking that will prepare you to participate as engaged citizens in addressing these threats to our future." 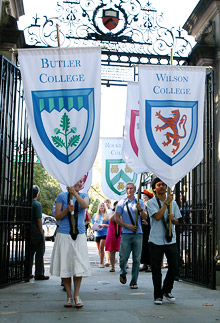 Following the ceremony, the class of 2012 was led by the banner bearers from the chapel through FitzRandolph Gate for the "pre-rade." (Photo: Brian Wilson)

Tilghman pointed out that for the majority of the freshmen, Nov. 4 will be the first time they can exercise their right to vote. However, she also noted that voter turnout rates among 18- to 29-year-olds have dropped from a high of 55 percent in 1972 to a low of 40 percent in 2000.

"Your age group has the lowest participation rate among all voters, which is ironic, given that you have the most at stake in an election, as you will feel the impact of the choice the longest," she said. "That discouraging downward trend began to reverse itself in 2004, and certainly the turnout during the primaries this winter and spring was very encouraging."

Returning to the words of Adlai Stevenson in his address to seniors at a banquet in the winter of 1954, Tilghman quoted: "'I would suggest,' he told the class, 'that it is not enough merely to vote but that we, all of us, have the further obligation to think, and to maintain steadfastly the right of all … to think freely. … So you as educated, privileged people have a broad responsibility to protect and to improve what you have inherited and what you would die to preserve -- the concept of government by consent of the governed as the only tolerable way of living.'"

In her own words, she added, "This call to active engagement with public affairs goes to the heart of our informal motto, 'Princeton in the nation's service and in the service of all nations,' and should be a defining feature of your time on this campus. If your education is not directed outward in the service of society, it will be an egocentric and ultimately arid exercise."

She ended her address by telling the freshmen that she was eager to get to know them as they plan their paths through Princeton.

"I hope that you will leave Princeton as educated citizens of this and 45 other countries, saying, as so many have before you, 'This place changed my life.' Welcome to Princeton!"

The "pre-rade" gave freshmen the opportunity to officially enter the campus to start their undergraduate experience and to be greeted by "high fives" from fellow Princetonians. (Photo: Brian Wilson)