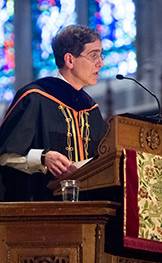 Opening Exercises marks the beginning of the academic year at Princeton University with music, student awards, readings from religious and philosophical traditions, and an address by President Christopher L. Eisgruber. Above, Eisgruber speaks to students in the University Chapel on Sunday, Sept. 7, about creating their own Princeton story filled with meaning. 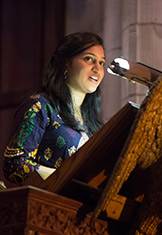 During the interfaith service, junior Hema Lochan reads a Hindu blessing amidst other student readings from a variety of traditions.

Princeton University President Christopher L. Eisgruber welcomed the incoming Class of 2018 at Opening Exercises on Sunday, Sept. 7, urging students to start the first chapter of their Princeton story with a sense of adventure.

Eisgruber, a member of Princeton's Class of 1983, said that the students of the incoming class, like those of previous generations, share the feeling that the start of the academic year is "like the beginning not just of a new chapter, but of an entirely new book." 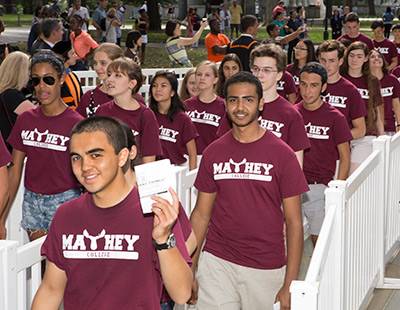 The newest members of Mathey College process toward the chapel at the start of the ceremony.

"And what a beginning!" Eisgruber proclaimed, looking out at the students and their families filling the University Chapel, which he admitted bore some resemblance to Hogwarts. "You feel like you are at the outset not of just any story, but of an adventure — your adventure, your own version, perhaps, of 'Harry Potter and the Sorcerer's Stone.'"

The interfaith Opening Exercises ceremony, a tradition dating to at least 1802, includes the freshman class as well as new and returning graduate students, other undergraduates, faculty and staff. Classes begin on Wednesday, Sept. 10.

Members of the Class of 2018 entered the chapel with other students representing Princeton's six residential colleges. Each group was led by a student carrying a banner bearing the college shield, as the students preceded faculty members, trustees and administrators in academic regalia. The procession followed African drummers and kite-bearers waving colorful cloth on long poles.

Calling the incoming class "an extraordinarily accomplished, inspiring and diverse group," Eisgruber noted that the 1,312 students hail from 46 states, as well as the District of Columbia, and 50 countries outside the United States. He welcomed the 578 new graduate students as "outstanding additions to the Princeton community," coming from 56 countries and 256 colleges and universities.

Freshmen from Rockefeller College, one of Princeton's six residential colleges, gather behind Nassau Hall before processing to the chapel.

In his address, Eisgruber spoke of the "magic in this place" — the chapel filled with fellow Princetonians — who "are the characters, the dramatis personae, of the story that you will help to create during your time on campus." 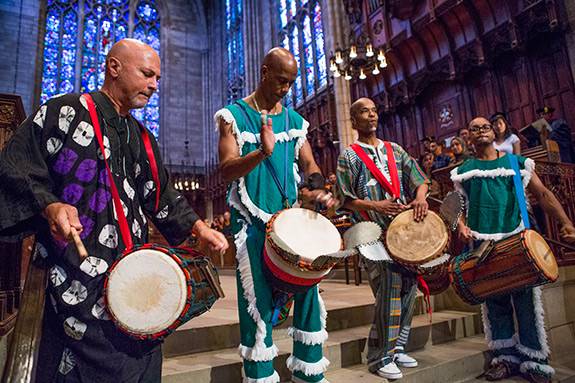 African drum music plays as the procession enters the chapel. The event is full of pageantry as the University community kicks off the academic year.

While creating their own Princeton story, Eisgruber asked the students to be attentive to what makes life meaningful.

Reflecting on the "Pre-read" book he had asked the incoming class to read over the summer, "Meaning in Life and Why It Matters," by Susan Wolf, Eisgruber said, "That sense of imminent discovery is, of course, part of what makes new beginnings so intriguing, so delightful — and, to invoke the idea that Susan Wolf explores in the book that you have read — so meaningful." 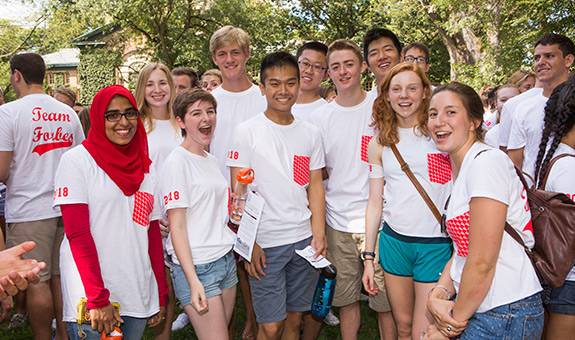 Residents of Forbes College gather on a sunny day as part of Opening Exercises.

He encouraged students to explore the "extraordinary opportunities to do what you love and to explore passions new and old — passions for ideas, for the arts, for service, for athletic competition, for spiritual growth, for what matters most to you." 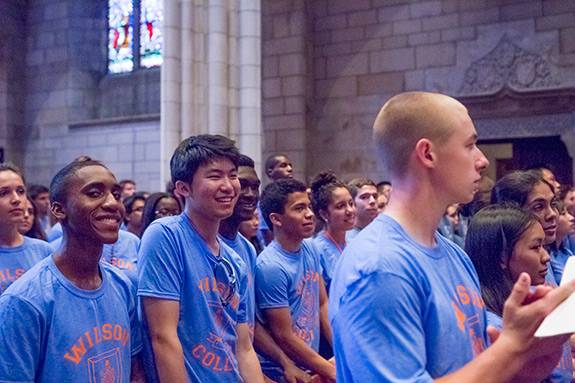 As part of the ceremony, students listen to an address by Eisgruber that urges them to start their own "adventure" and get to know the "characters" — classmates as well as professors — who will be part of their Princeton story.

He agreed with Wolf, the Edna J. Koury Professor of Philosophy at the University of North Carolina-Chapel Hill, who earned her Ph.D. in philosophy from Princeton, "that our desire to be engaged in projects of independent value is 'related to our social natures,' and, more specifically, with our desire to be working in concert with, and to be valued by, others."

In entering the "extraordinary community" of Princeton, Eisgruber also reminded students to engage with the other key "characters" in their Princeton story — their teachers.

"You have come to a university that is small enough, personal enough, and that cares enough about teaching that you can get to know the extraordinary people who will teach you," said Eisgruber, who is also the Laurance S. Rockefeller Professor of Public Affairs in the Woodrow Wilson School and the University Center for Human Values. "That is an exceptional opportunity. But it only matters, of course, if you really get to know them." 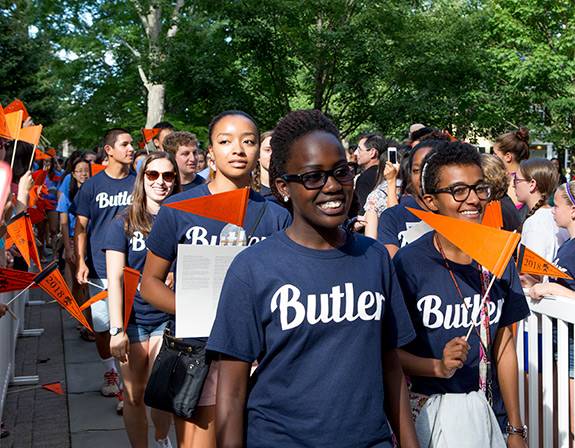 The newest members of Butler College march along the "Pre-rade" route, through FitzRandolph Gate and onto the front lawn of Nassau Hall, as fellow Princetonians cheer them on.

With humor, Eisgruber said it is traditional for a university president to give advice to freshmen — and then be ignored — so he would keep his message simple: "Get to know your professors! Talk to them after class. Go to their office hours. Invite them to lunch."

This, Eisgruber acknowledged, "will require some courage." 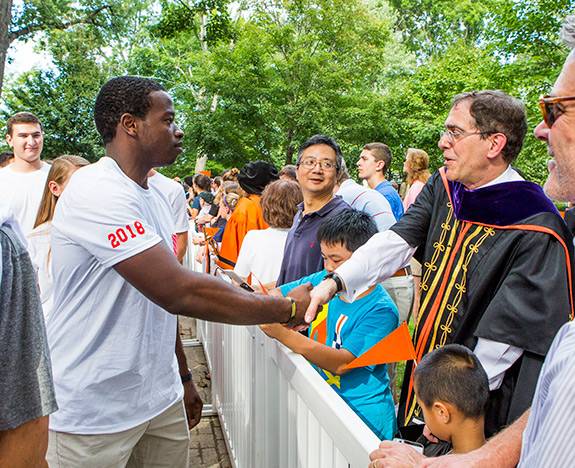 "We professors imagine ourselves to be youthful, hip, stylish and ever so approachable. You know better. You see us — or most of us, anyway — as unfathomably ancient, occasionally eccentric and at least mildly intimidating. You may be right. But even if most of us on the faculty are neither quite so young nor so affable as we like to think, we care deeply about teaching and about you, our students. If you make the effort to get to know your professors, your Princeton adventure — and the years that follow it — will be more rewarding, and more meaningful, as a result."

In closing, Eisgruber bestowed on the class the affectionate moniker welcoming them to the University: "For you today, and forever you shall be, Princeton University's Great Class of 2018! Welcome to Princeton!"

After the ceremony, freshmen left the chapel and participated in the "Pre-rade," a parade through the FitzRandolph gate at the front of campus, where they were cheered on by other Princetonians. 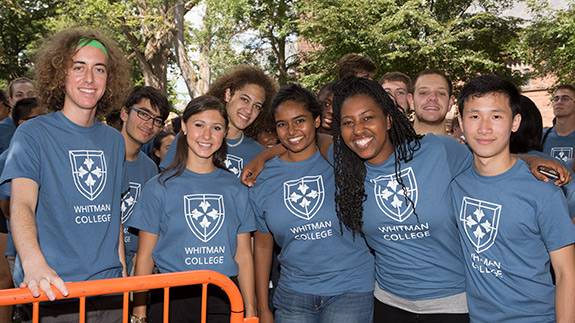 Opening Exercises, which follows orientation activities and other welcome events, allows incoming students to connect with classmates in their residential colleges. Above are new residents of Whitman College.