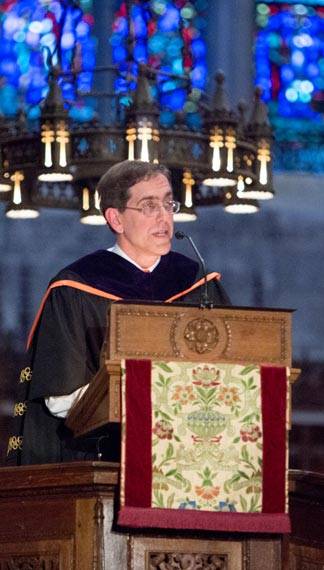 Opening Exercises marks the beginning of the academic year at Princeton University with music, student awards, readings from religious and philosophical traditions, and an address by President Christopher L. Eisgruber. Above, Eisgruber speaks to students in the University Chapel on Sunday, Sept. 13, about how they "should strive to understand and learn from the perspectives and experiences of others around you."

Princeton University President Christopher L. Eisgruber welcomed the incoming Class of 2019 at Opening Exercises on Sept. 13, noting that while many students already may have met through social media, they will really get to know each other in person.

"We gather you here, physically and in person, because community and relationships matter fundamentally to our mission," Eisgruber said, looking out at the students gathered in the University Chapel.

"Oh what a relic am I!" Eisgruber declared, recalling that when he arrived on campus as a member of the Class of 1983, he only knew the names of the two roommates assigned to him by the University.

Eisgruber said he imagined that much of the Class of 2019 would "have spent the last few months relentlessly texting, Facebooking, Googling, Instagramming, and tweeting at, with and about one another."

Yet, he said, "despite all this new technology and the social networking that it makes possible, we gather you physically, much as Princeton has done for centuries, in this chapel."

The interfaith Opening Exercises ceremony, a tradition dating to at least 1802, includes the freshman class as well as new and returning graduate students, other undergraduates, faculty and staff. Classes begin on Wednesday, Sept. 16.

Members of the Class of 2019 entered the University Chapel with other students representing Princeton's six residential colleges. Each group was led by a student carrying a banner bearing the college shield, as the students preceded faculty members, trustees and administrators in academic regalia. Music by African drummers and kite-bearers waving colorful cloth on long poles added a celebratory tone to the procession. 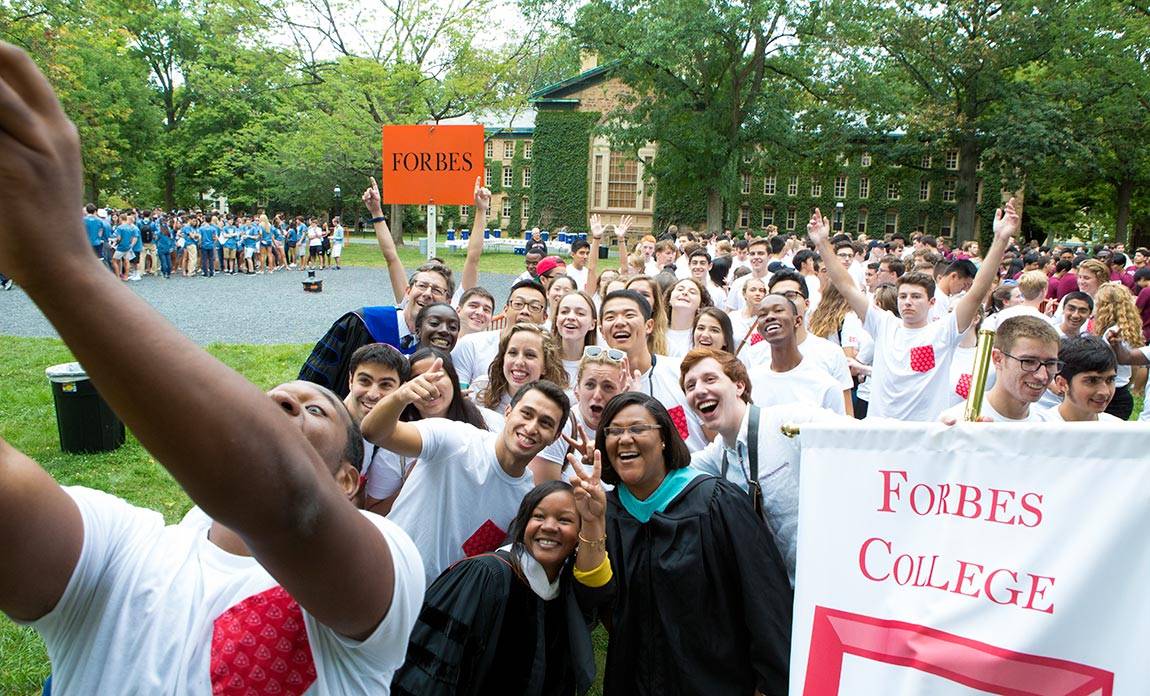 Members of Princeton's six residential colleges gather on Cannon Green before processing to the chapel. Above, residents of Forbes College take a group selfie.

Calling the incoming class "an extraordinarily accomplished, inspiring and diverse group," Eisgruber noted that the 1,319 students hail from 46 states, as well as the District of Columbia, and 51 countries outside the United States. He welcomed the 619 new graduate students as "scholars who will create new knowledge," coming from 51 countries and 262 colleges and universities.

In his address, Eisgruber explained that, at Princeton, education involves much more than the "transmission of information from one brain to another."

"We believe that learning also requires qualities of character and feeling and judgment: motivation, engagement, initiative, persistence, resilience, curiosity, imagination and daring," he said. "These are aspects not of information or argument but of people, and they are inspired and nurtured by the kinds of relationships that develop on campuses like this one."

Such bonds require "close contact," Eisgruber said, reminding students that they are "just beginning the process of living together and forming human relationships that matter, and of contending with the diversity, at once wonderful and difficult, of the people around you." 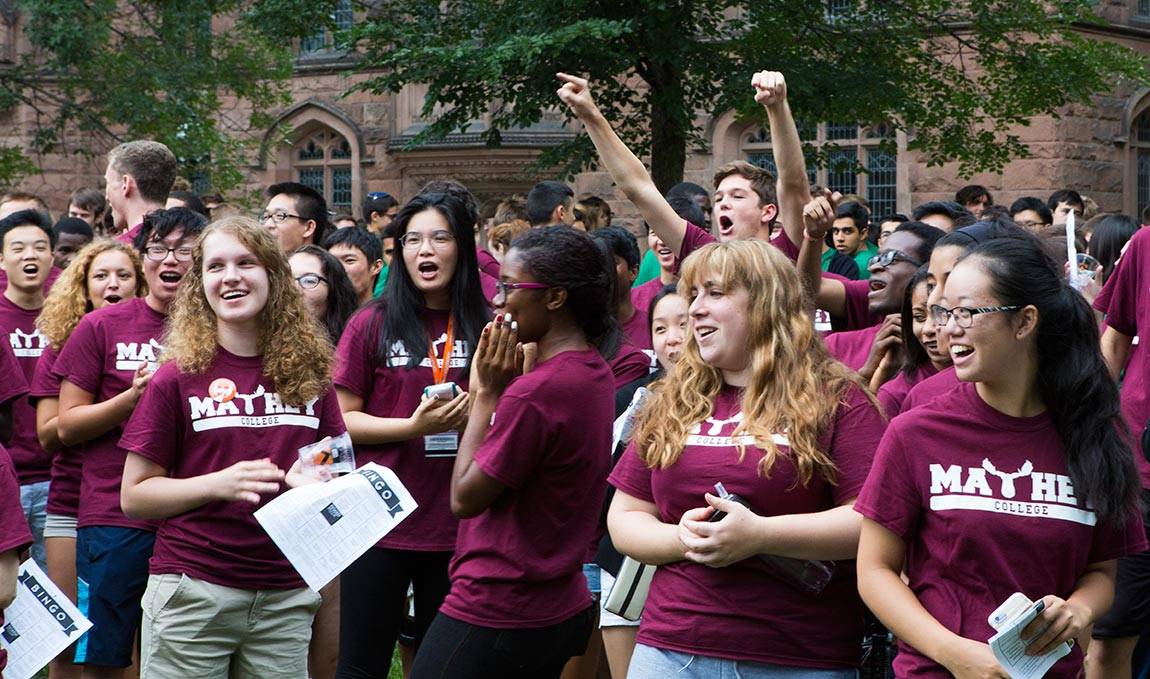 Reflecting on the Pre-read book he'd asked the incoming class to read, "Whistling Vivaldi: How Stereotypes Affect Us and What We Can Do," by Claude Steele, who had spoken at the freshman assembly the previous night, Eisgruber said that encountering people with "views, backgrounds, values and assumptions different from your own" can cause people to feel their identities to be threatened.

"There is no simple recipe, no standard set of instructions, for engaging with the diversity of opinions and backgrounds that you will encounter on this campus," Eisgruber said.

"You will have to make your own choices about how to interact with the community around you — about when to sympathize, when to argue, when to accommodate, when to confront and when to walk away," he said. "But I can confidently give you one piece of guidance: You should strive to understand and learn from the perspectives and experiences of others around you."

Noting how Steele had gained insights by "careful listening to those around him," including a faculty mentor, Eisgruber urged students to get to know their professors. 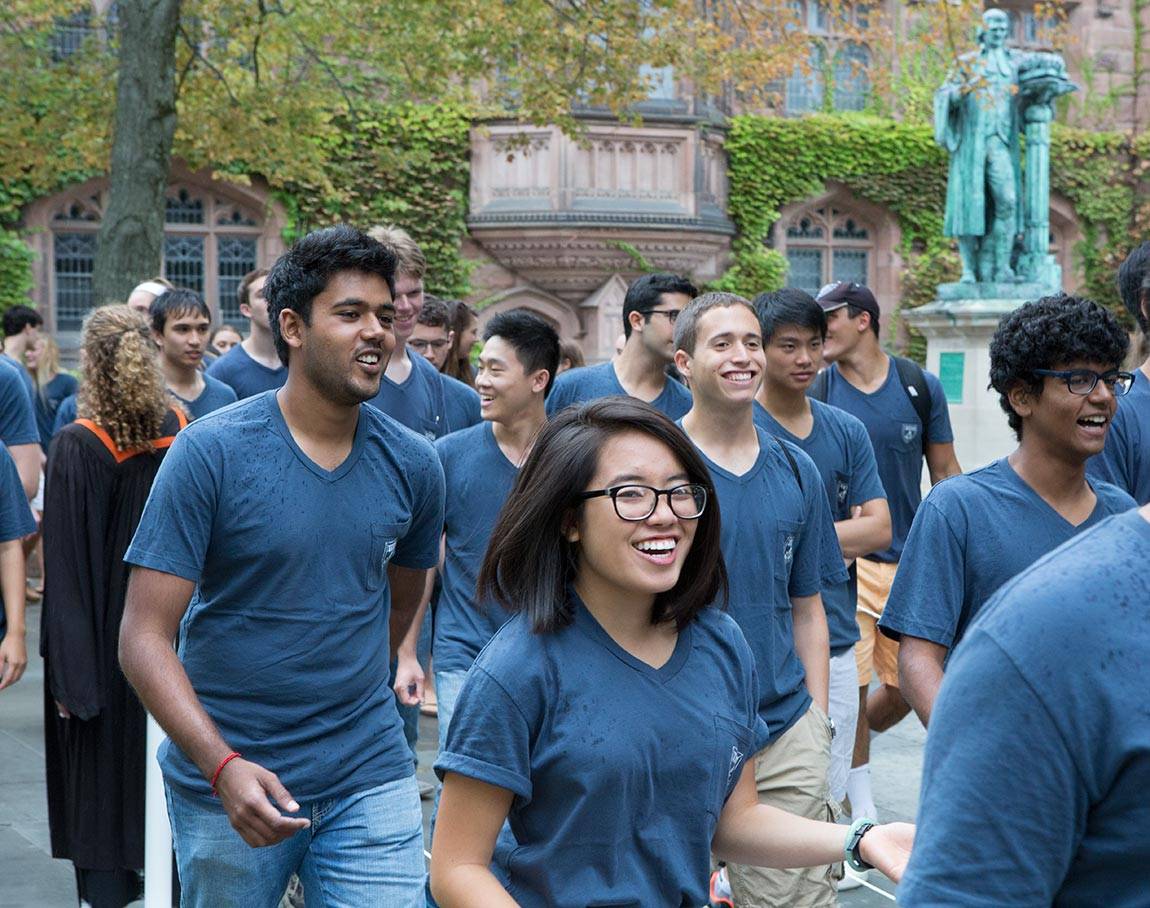 The newest members of Butler College process toward the chapel at the start of the ceremony.

"A singular advantage" of studying at Princeton is that "you have access to extraordinary scholars who will take your ideas seriously," he stressed. "But to do so, you must talk to them! So approach them after class. Go to office hours. Invite them to lunch."

In closing, Eisgruber spoke of what the new students will bring to the University community and "what we will learn from you — to the ways that you will amaze, surprise, challenge and thrill us in the years to come," before warmly welcoming them as  "Princeton's Great Class of 2019!"

After the ceremony, freshmen left the chapel and participated in the "Pre-rade," a parade through the FitzRandolph Gate at the front of campus, where they were cheered on by other students. 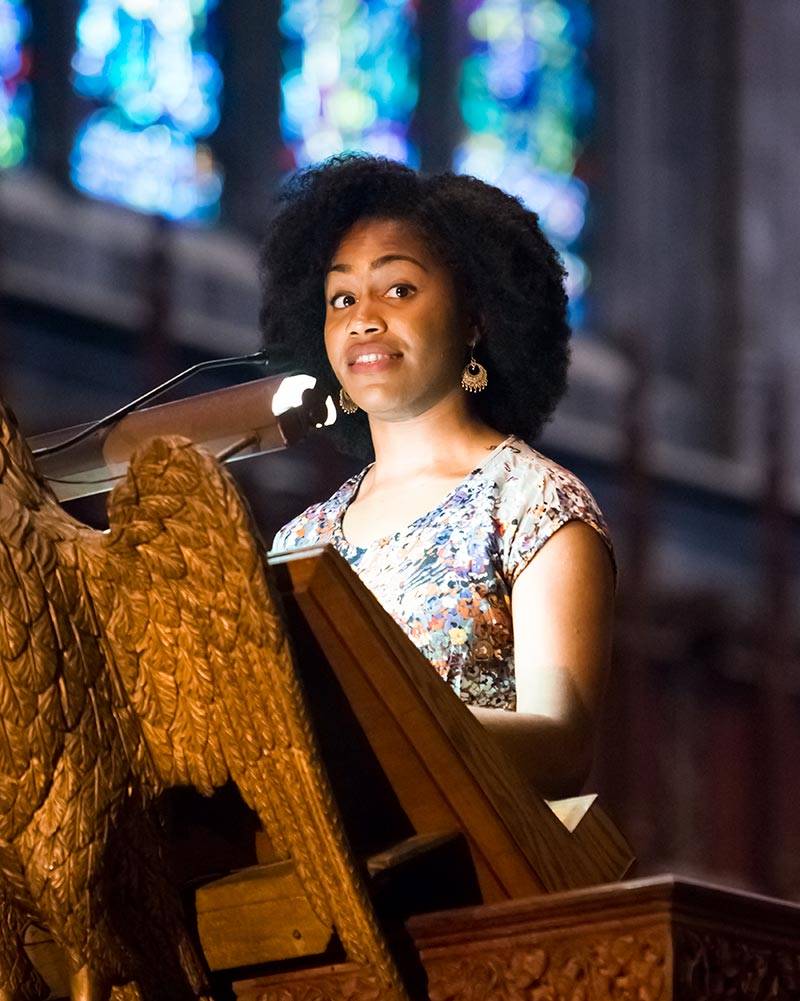 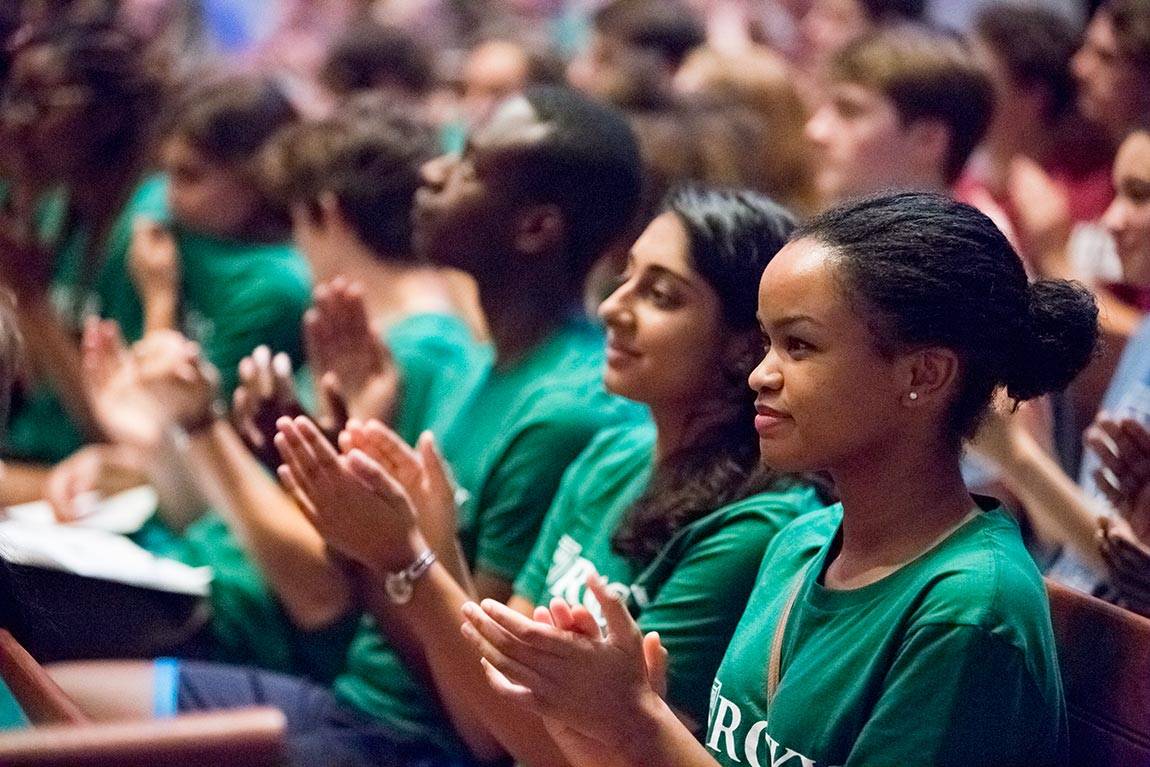 Residents of Rockefeller College applaud the performances at Opening Exercises. 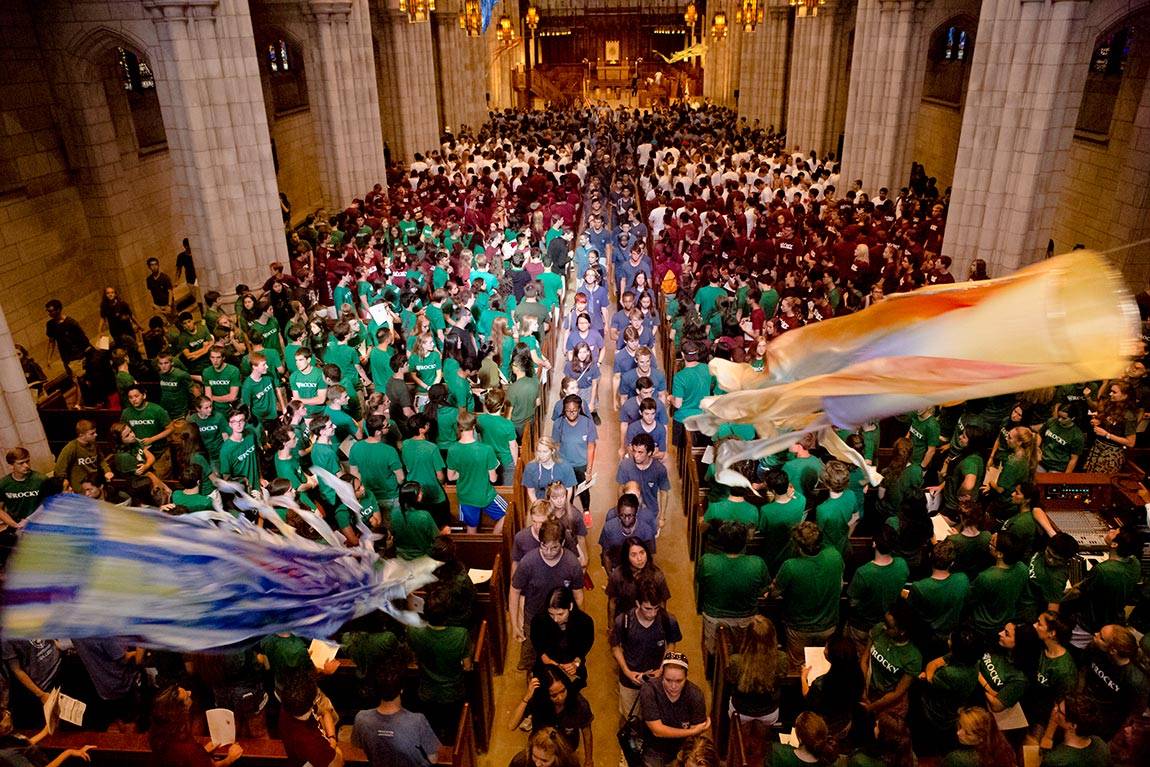 The soaring spaces of the chapel provide a grand setting for Opening Exercises. 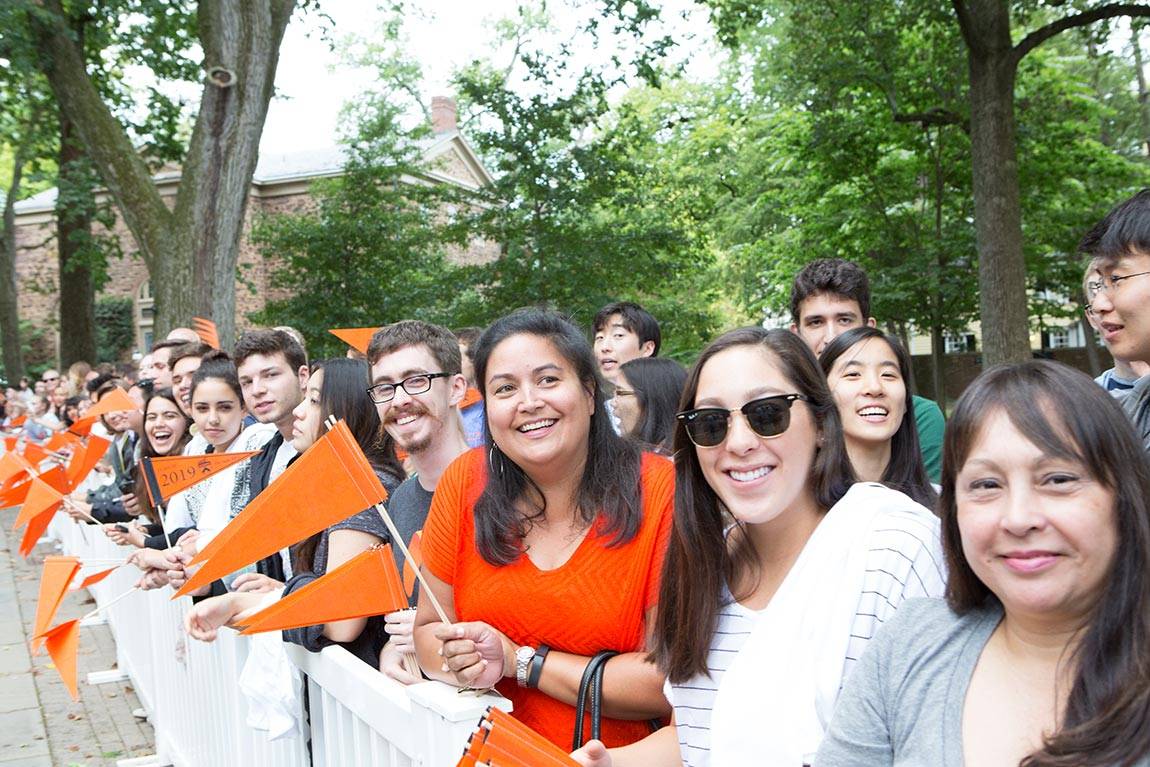 Princetonians and well-wishers welcome the Class of 2019 along the Pre-rade route at the front of campus. 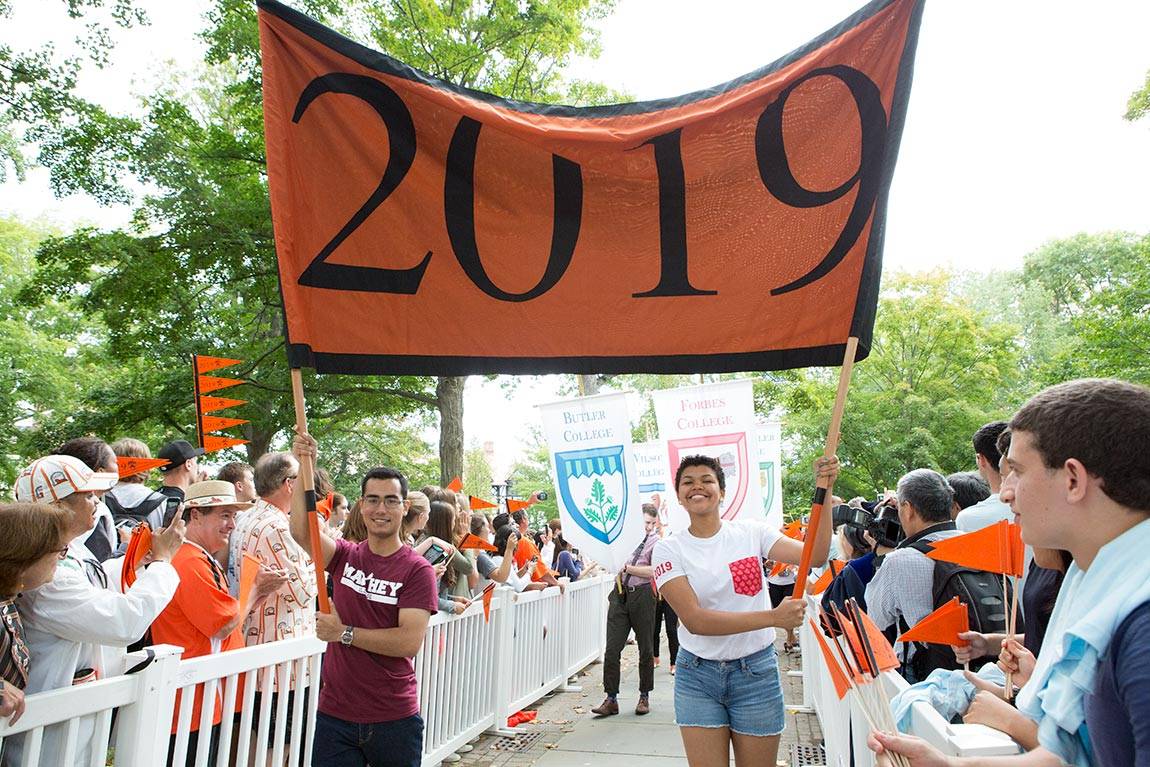 Freshmen Josha Faires, left, and Victoria Davidjohn hold high the banner for the undergraduate Class of 2019, which has 1,319 members.