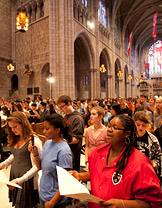 New members of the class of 2014 join in the prayers, readings and songs that make up the ceremony for Opening Exercises Sept. 12 in the University Chapel. The interfaith service traditionally marks the start of each academic year. Classes begin on Thursday, Sept. 16. 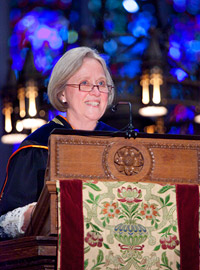 President Shirley M. Tilghman welcomes the freshmen, and in her address challenges them to develop both specialized expertise and broad understanding.

"Narrow expertise is necessary, but it is not sufficient to contribute to complex problem-solving, while, on the other hand, a jack-of-all-trades who is a master of none brings little to the table," Tilghman said in her address. "Your liberal education will reconcile this contradiction by endowing you with the mantles of both expert and generalist."

Tilghman borrowed from the words of a famous Princetonian, author F. Scott Fitzgerald of the class of 1917, telling the students that "the test of a first-rate intelligence is the ability to hold two opposing ideas in mind at the same time and still retain the ability to function." 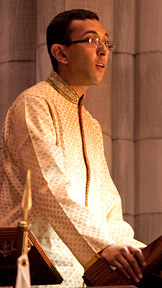 Rahul Subramaniam, a member of the class of 2011, offers a reading from the Hindu Vedas, among readings from students from various religious and philosophical traditions.

The new students and their families -- joined by new and returning graduate students, other undergraduates, faculty and staff -- filled the University Chapel and two simulcast sites for the interfaith service that traditionally marks the start of each academic year. Classes begin on Thursday, Sept. 16.

Members of the class of 2014 entered the chapel with other students in their respective residential colleges. Each group was led by a student carrying a colorful banner bearing the college shield, as the students preceded faculty members and administrators in academic regalia. The procession followed African drummers and kite-bearers waving shimmering pieces of cloth on long poles.

The ceremony began with a welcome from Tilghman to the new and returning members of the University community. She noted that the 1,312 members of the class of 2014 hail from 48 states, and 47 countries on six continents, and that among the 636 new graduate students, 39 percent are citizens of other countries, a testament to the fact that Princeton is truly an international university. 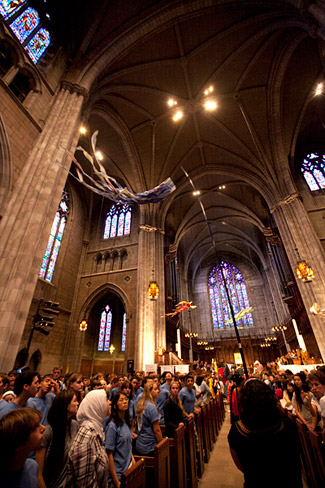 As students fill the chapel, people flying kites on long poles lead the procession of faculty members and administrators in academic regalia.

In expounding on her advice for students to use their time at Princeton becoming both experts and generalists, Tilghman told them that Princeton's goal "is to inculcate mental flexibility, resilience and openness to change so that you are prepared for anything."She used as an example the search for energy alternatives, recounting the topics of senior theses written by members of the class of 2009 who concentrated their studies in anthropology, geosciences, mathematics and the Woodrow Wilson School of Public and International Affairs.

"What is striking about these topics is the very different disciplinary expertise each student brought to bear on an environmental issue," Tilghman said. "Yet their contributions would be destined to have limited impact if they were unable to frame them and integrate them into a much broader context."

Tilghman warned the students against developing narrow perspectives, citing the case of lobbying by policymakers for investments in the use of corn alcohol as fuel that was later determined by scientists to use more energy to produce than the energy value of the product. She told students, "By requiring that you sample the breadth of human knowledge through the distribution requirements at the same time as you are learning how to master a single question, the University is preparing you to avoid siloed thinking and the missteps that can easily arise from it." 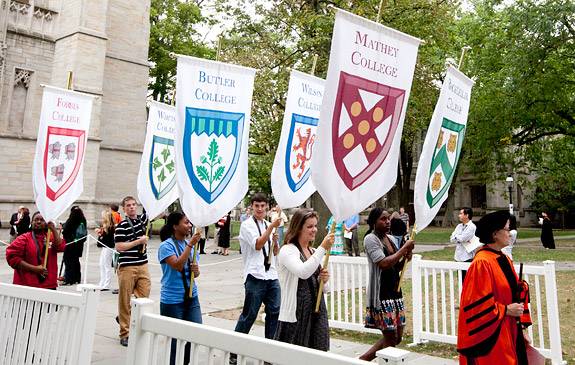 Following the ceremony, banner bearers with flags from each residential college escort the class of 2014 from the chapel toward FitzRandolph Gate for the "pre-rade."

She encouraged students to embrace the apparent contradiction of pursuing a specific career by preparing themselves for any career. 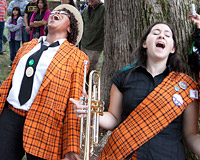 The Princeton Band performs at the annual "pre-rade."

"By making this your approach, you will go a long way to ensuring that the next four years will be among the most exciting and rewarding of your lives," she said.

After the ceremony, the freshmen participated in a "pre-rade" from the chapel through FitzRandolph Gates, officially entering the campus to start their undergraduate experience while being cheered and greeted by other Princetonians. 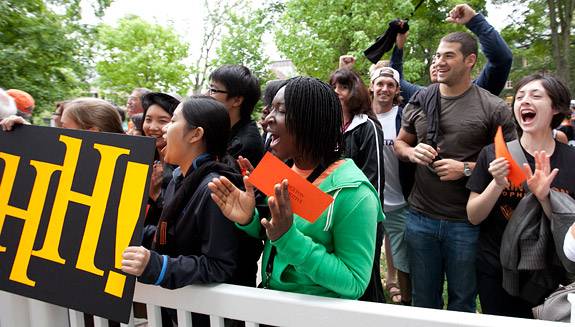 During the pre-rade, the freshmen officially enter the campus to start their undergraduate experience, including receiving instructions from other Princeton students and alumni on how to do the traditional locomotive cheer (with the words "Sis! Boom! Ahhh!").

Freshmen at the pre-rade enter the campus to start their undergraduate experience, greeted with cheers and "high fives" from fellow Princetonians.