Freshmen entered the University Chapel for Opening Exercises Sept. 13 with other students in their residential college. Each group was led by the carrier of a colorful banner bearing the college's shield -- the Rockefeller College banner caught the sun in this shot, followed by the Mathey College banner. The interfaith service traditionally marks the start of each academic year. Classes begin on Thursday, Sept. 17.

Inspired by comedian and television host David Letterman, Princeton President Shirley M. Tilghman offered freshmen at Opening Exercises Sunday (Sept. 13) her Top Ten list of "things I hope you do before you march proudly out the FitzRandolph Gates" at Commencement.

The agenda ranged from advice on dealing with parents to recommendations on choosing classes. 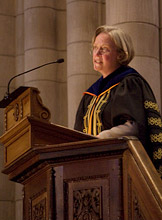 President Shirley M. Tilghman presented her Top Ten list to the class of 2013.

Tilghman confessed that she resorted to the Top Ten list in an effort to find a new way to tell students how to make the most of their time at Princeton. "What I love most about Opening Exercises is the hope for the future that overcomes me as I look into your faces while walking up and down the aisle, trying to elicit smiles," she said. The president of Princeton since 2001, Tilghman said what she finds taxing about the annual event is coming up with an innovative approach to her address.

One concept she finds easy to convey year after year is the purpose of a Princeton education -- "to prepare very talented young men and women like you to make a positive difference in the world by helping you develop the qualities that are required of leaders: a devotion to critical thinking over ideology; the self-confidence that it takes to change your mind in the face of new evidence; the capacity to speak the truth as you understand it; a deep respect for learning as opposed to uninformed opinion; and the strength of character that grows out of humility and compassion for your fellow human beings."

The new students and their families, as well as new and returning graduate students, other undergraduates, faculty and staff, filled the University Chapel and two simulcast sites for the interfaith service that traditionally marks the start of each academic year. Classes begin on Thursday, Sept. 17. 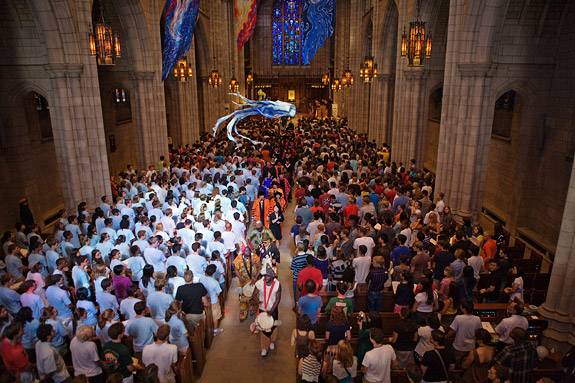 African drummers and people flying kites on long poles led the procession of faculty members and administrators in academic regalia.

Freshmen entered the chapel with other students in their residential college. Each group was led by the carrier of a colorful banner bearing the college's shield. The students preceded the procession of faculty members and administrators in academic regalia led by African drummers and people flying kites on long poles.

Margaret Harris, a member of the class of 2011, was among the students who offered readings from various religious and philosophical traditions.

Tilghman began the ceremony by welcoming new and returning members of the University community. She noted that the class of 2013 is the largest freshman class in Princeton's 263-year history, reflecting the decision made in 2001 to expand the size of each undergraduate class from 1,175 to 1,300 students -- the first significant increase since the institution of coeducation in the early 1970s.

Turning to "Tilghman's Top Ten" -- "in no particular order, and minus the drum roll" -- the president offered:

• No. 10: Call, e-mail, text or IM home, but not too often. As hard as it is for parents to accept, we did not admit them to Princeton when we admitted you.

• No 9: When you are feeling overwhelmed by Princeton, as every single student surely does at some point, say the following things to yourselves: "I was chosen from among 22,000 applicants by an experienced group of admission officers, who are not known for making mistakes. … I have earned the right to be here."

• No. 8: Approach Princeton with gusto, but not abandon. You will face a dizzying array of choices in the next few months -- the courses you will take, the student groups you will join, the friends you will cultivate. Keep in mind that less is often more.

• No. 7: Invite your favorite professor to lunch or dinner in your residential college. … Now that the food is not just "filling and nourishing," as my children used to describe my own cooking, but delicious as well, faculty welcome the chance to meet students in this more casual setting.

• No. 6: Use your time at Princeton to "encounter the other." …You will never again live in the midst of such extraordinary diversity, and the chance to explore it is an integral part of your Princeton education. 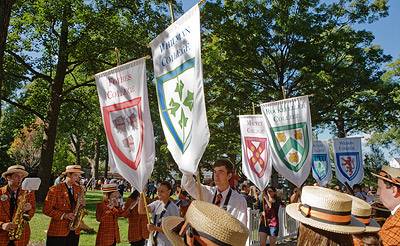 Following the ceremony, the banner bearers led the freshmen from the chapel through FitzRandolph Gates for the annual "pre-rade," where the Princeton Band performed.

• No. 5: Don't confuse the next four years of education in the liberal arts with pre-professional education. The purpose of a Princeton education is most decidedly not to prepare you for one profession, but for any profession, including ones that have not yet been invented.

• No. 4: Study what fascinates you, not just the subjects in which you shone in high school, if for no other reason than you will have a much greater likelihood of excelling at your studies if they happen to coincide with something that ignites your curiosity. And at the risk of appearing to contradict what I just said, be sure to take at least one course this year in a subject you know absolutely nothing about. 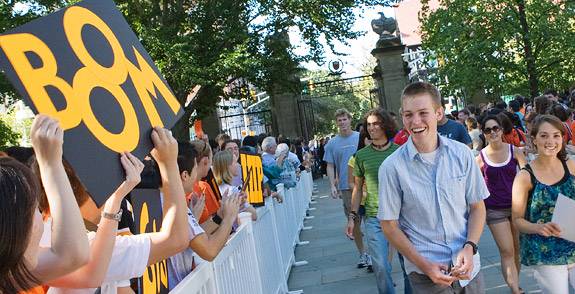 During the pre-rade, the freshmen officially entered the campus to start their undergraduate experience and were greeted by fellow Princetonians, who provided instructions on how to do the locomotive cheer (including the words "Sis! Boom! Ahhh!").

• No. 3: Follow the example of Michelle Obama, Princeton class of 1985, and embrace our informal motto "Princeton in the nation's service and in the service of all nations" while you are here.

• No. 2: Break out of the orange bubble and explore the world. 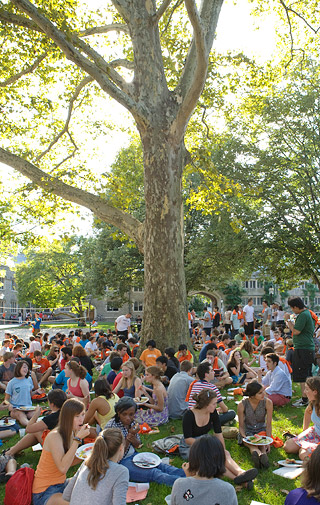 The day's activities continued with a barbecue dinner on Alexander Beach.

• No. 1: Remember to exercise, eat healthy, get some sleep and, above all, have fun! You are very likely to meet friends who will remain with you for the rest of your lives, but this won't happen unless you make time for them.

Tilghman concluded her address by telling the freshmen that she was eager to meet them.

"I am looking forward to getting to know each of you and to cheering you on inside and outside the classroom as you chart your course through this great University," she said. "I hope that you will leave Princeton, saying, as so many have before you, 'This place changed my life.' Welcome to Princeton!"

Following the ceremony, the freshmen participated in a "pre-rade" from the chapel through FitzRandolph Gates, giving them the opportunity to officially enter the campus to start their undergraduate experience and to be greeted by fellow Princetonians.