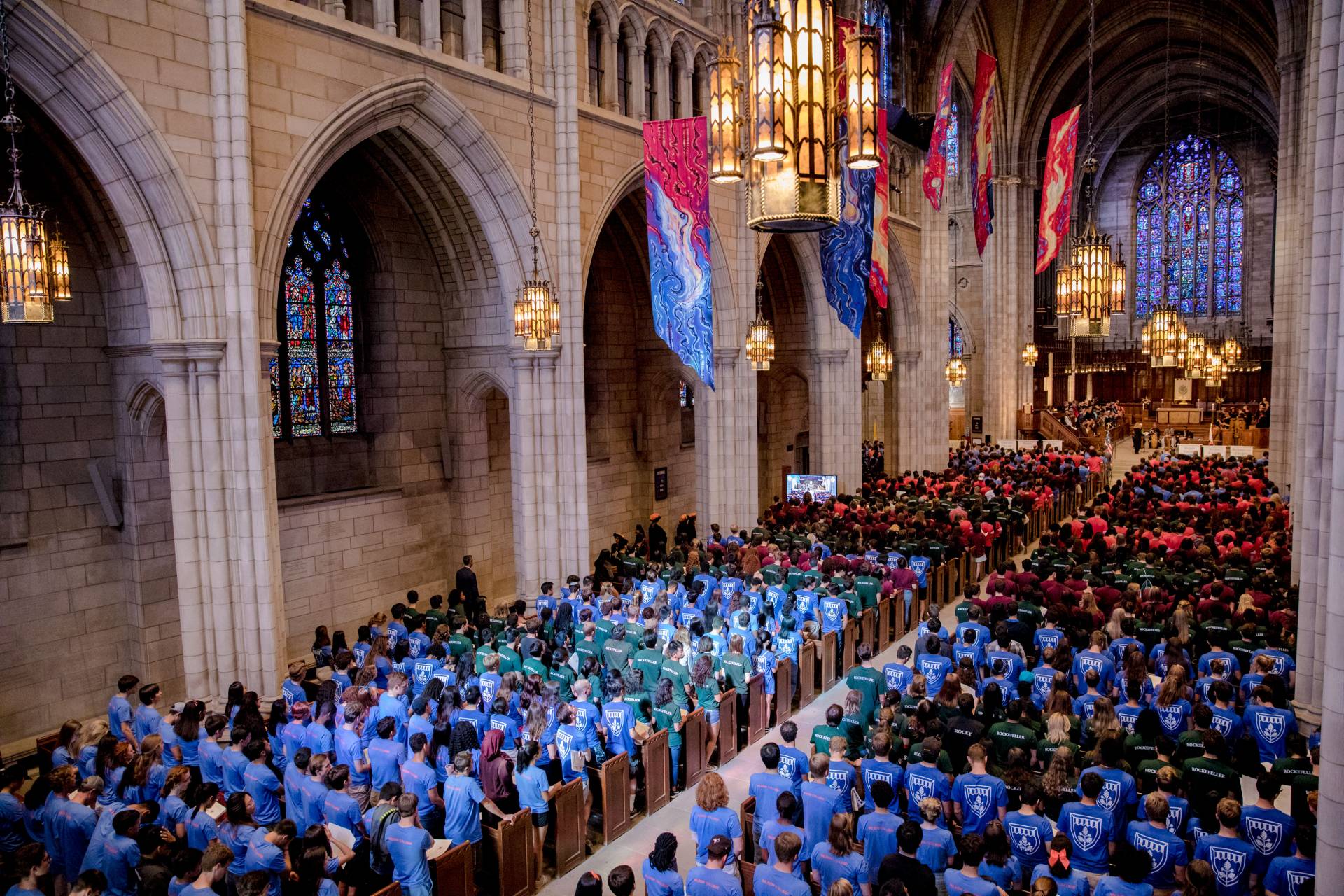 The Opening Exercises ceremony, held in the University Chapel on Sunday, Sept. 10, marks the start of the academic year at Princeton.

Emphasizing the value of pluralism and the importance of independent thinking, Princeton President Christopher L. Eisgruber welcomed the Class of 2021 on Sunday, Sept. 10, during Opening Exercises marking the start of the academic year.

"Today is one of my favorite days of the academic year," Eisgruber said, addressing the students gathered in the University Chapel. "It is our New Year's Day, a day when Princeton starts afresh."

Yet, while the University community looks forward to all the new possibilities of the academic year, Eisgruber said that the world around us does not begin afresh. "(I)t hurtles forward at a pace that can seem exhilarating, bewildering, or both. Technology, political parties, international alliances, global climate, transportation, health care, how we communicate, how we shop, what jobs we do: everything seems to be changing, and changing very fast." 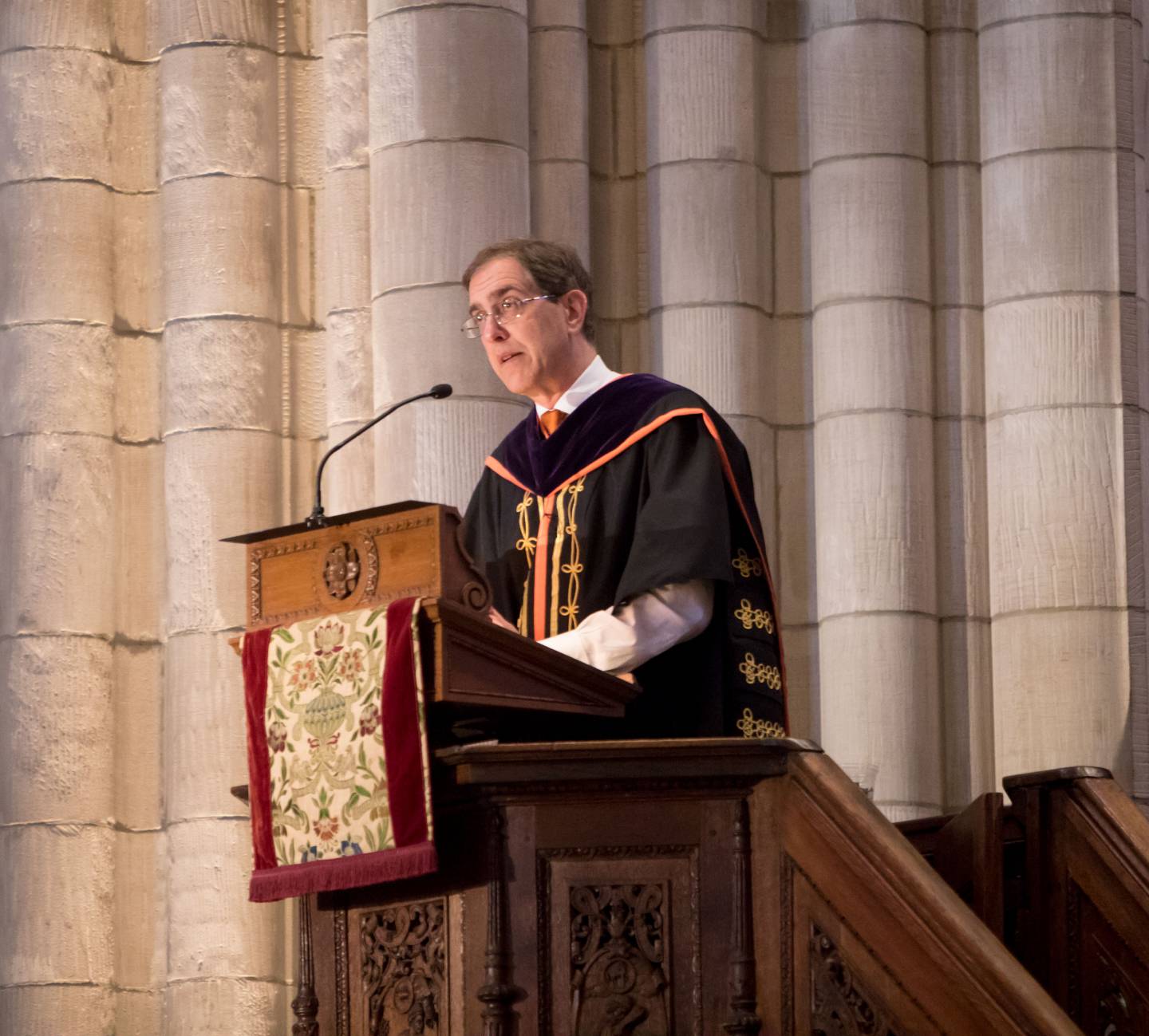 Greeting the new year, the tradition of Opening Exercises dates to at least 1802, and includes the first-year class as well as other undergraduates, graduate students, faculty and staff. The interfaith ceremony follows a week of Orientation activities. Classes begin on Wednesday, Sept. 13.

Members of the Class of 2021 entered the chapel wearing T-shirts representing Princeton's six residential colleges. Each group was led by a student carrying a banner bearing the college shield, as the students preceded faculty members, trustees and administrators in academic regalia. African drum music and kites waving on long poles helped set the scene.

This year's incoming students include 1,315 undergraduates and 664 graduate students from across the country and around the world.

In his greeting, Eisgruber asked for a moment of silent compassion to reflect on the needs of those who might have wished to join the ceremony but could not, referring in particular to Xiyue Wang, a graduate student in history who was conducting scholarly research in Iran when he was arrested more than a year ago and charged with espionage. "For more than a year, the University has been working on a daily basis to try to secure his release and to support him and his family," Eisgruber said, noting that Iran's detention of Xiyue undermines scholarly exchange and violates basic human rights. 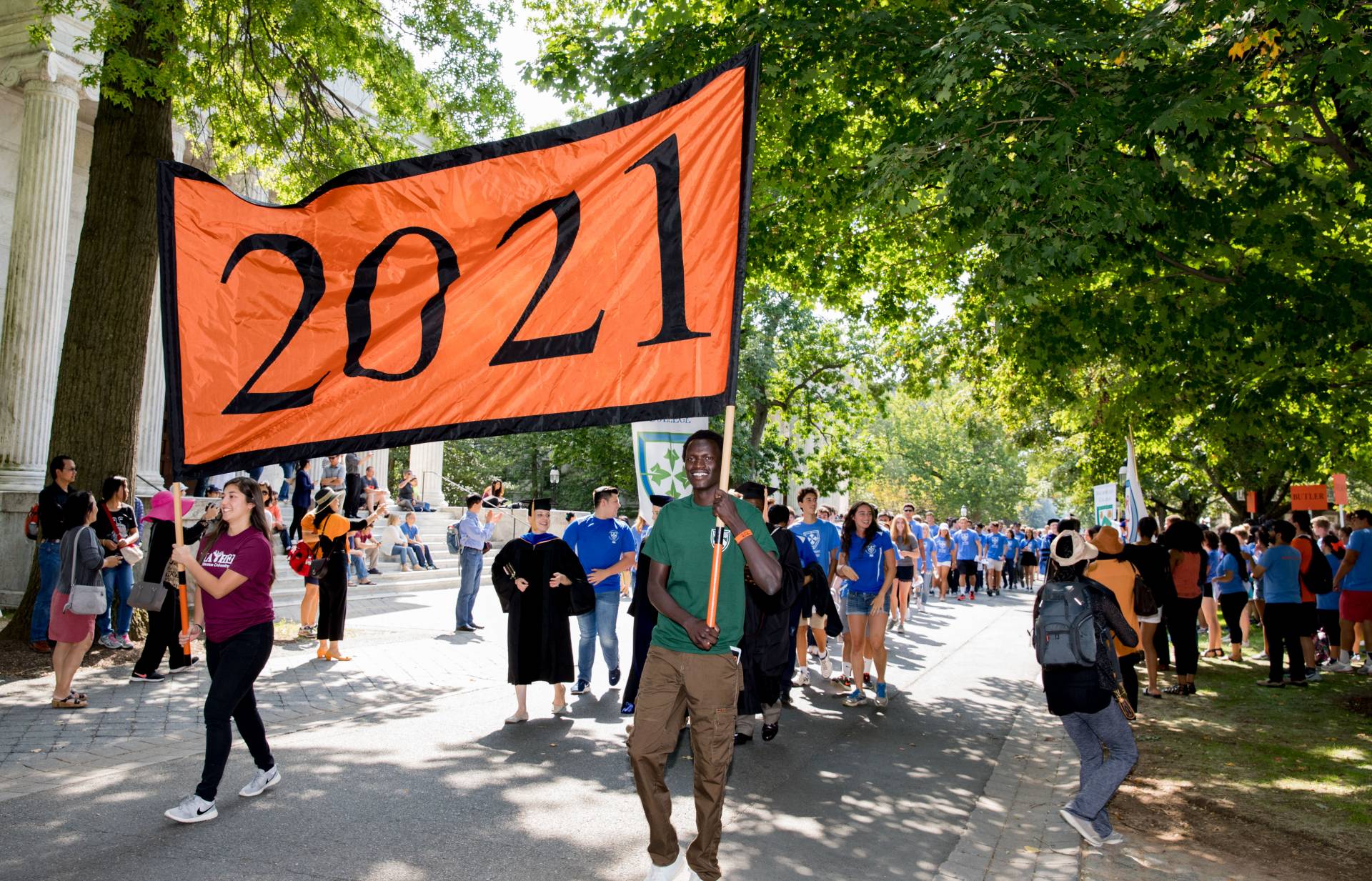 Members of the Class of 2021 proudly lead the procession. 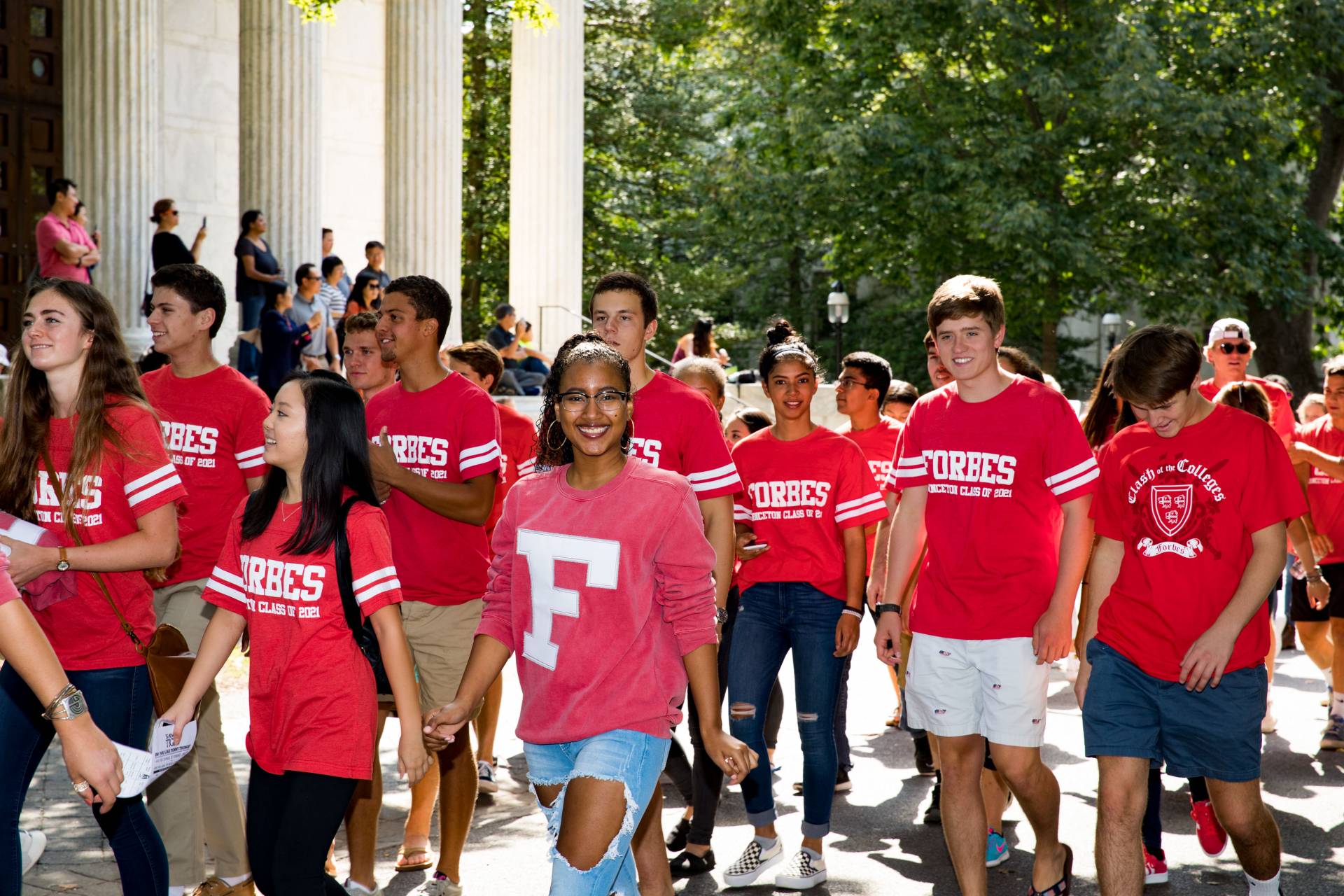 Students from Forbes College, one of Princeton's six residential colleges, join the procession to the chapel.

In his address, Eisgruber asked students to think about what they had learned in reading the book he had selected for the summer's Pre-read, "What Is Populism?" by Princeton politics professor Jan-Werner Müller. One aspect of the recent changes in the world that Müller's book can help understand, he said, are questions of populism regarding Britain's vote to leave the European Union and the election in the United States of Donald Trump.

Eisgruber said that Müller shows that "populism" often is not defined carefully, and that the term "usually evokes the idea that ordinary people are taking power back from some group of elites."

He explained that Müller argues otherwise. "Professor Müller thinks that a different and more troubling trend lies at populism's core. He argues that populism is anti-pluralist, and that populist leaders act as though 'anyone who does not support them is not properly part of the people,'" said Eisgruber, quoting Müller.

Added Eisgruber, who is a scholar of the Constitution: "If Professor Müller is correct, then populism is at odds with the foundational principles of both the United States and this University. The United States Constitution and Princeton University are pluralist at their core. Both are committed to the idea that people of all races, religions and ethnicities deserve full and equal respect, and beyond that to the idea that diversity of background, experience, identity and opinion is, for this country and for this University, one of our greatest strengths." 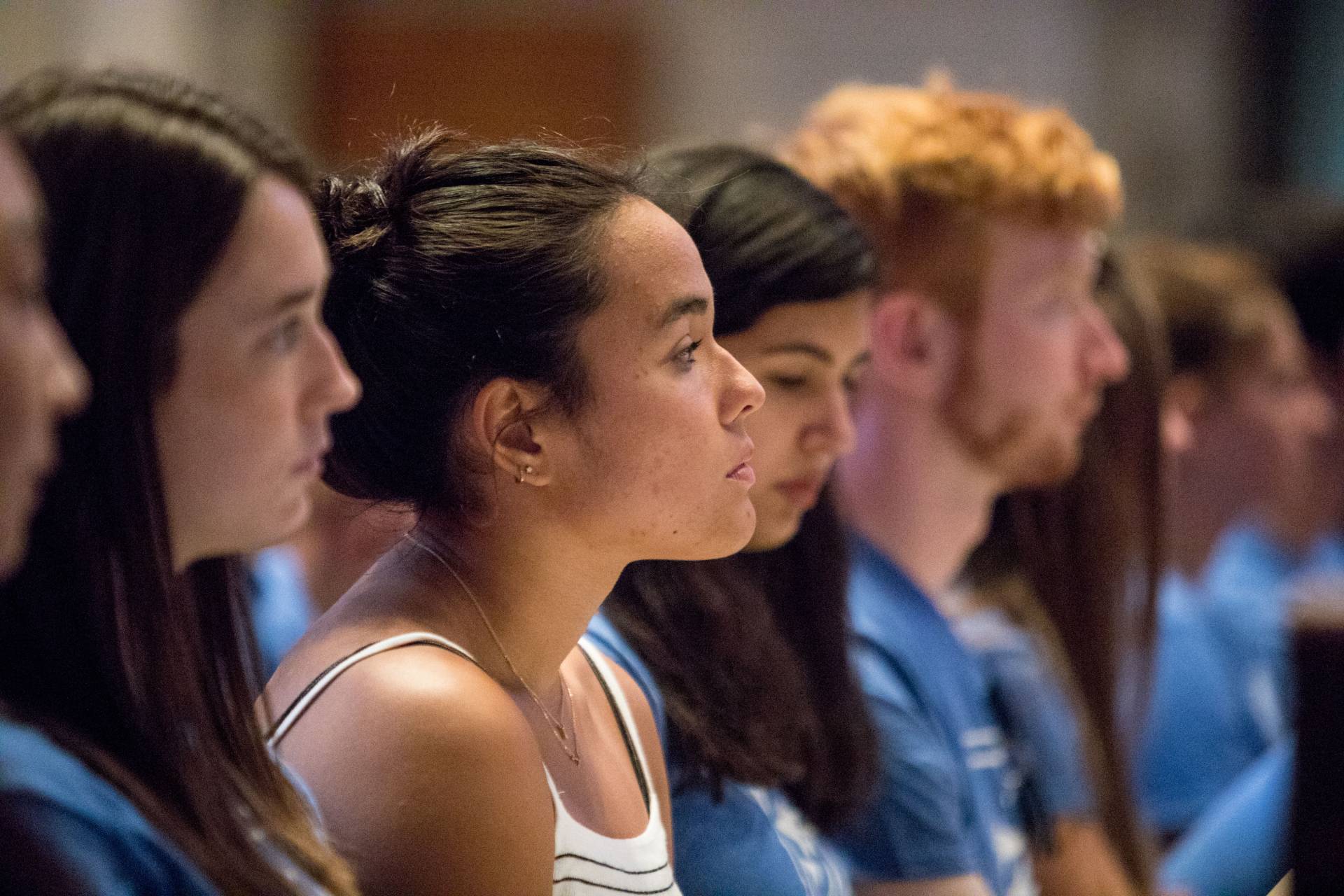 Eisgruber turned to the events this summer in Charlottesville, Virginia, describing how "white nationalists marched in support of racism, spewed hatred, courted violence and injured counter-protesters, killing one of them." He said, "What converted the violence from an outrage into a crisis with broader implications, however, was the American president's equivocating response to it."

Eisgruber said that it is neither his role nor that of the University to suggest to students how to react to those events. "It is rather my role and the role of the University to encourage you to think deeply about what these events mean for this country and its core values, and to encourage you to find ways to participate constructively in the national dialogue they have generated," he said, noting that Princeton has several faculty members who can provide insight into the events in Charlottesville.

He asked, however, that students understand it is their own responsibility to assess the arguments they hear from faculty members.

He said that "independent thinking is at the heart of liberal arts education," and is a "profoundly valuable form of education." Eisgruber stressed the importance of "careful and respectful engagement with views very different from your own."

As such, independence of mind can lead to disagreements, which are part of an education that values pluralism. "To take full advantage of a Princeton education, you must learn and benefit from these disagreements, and to do that you must cultivate and practice the art of constructive disagreement," Eisgruber said. 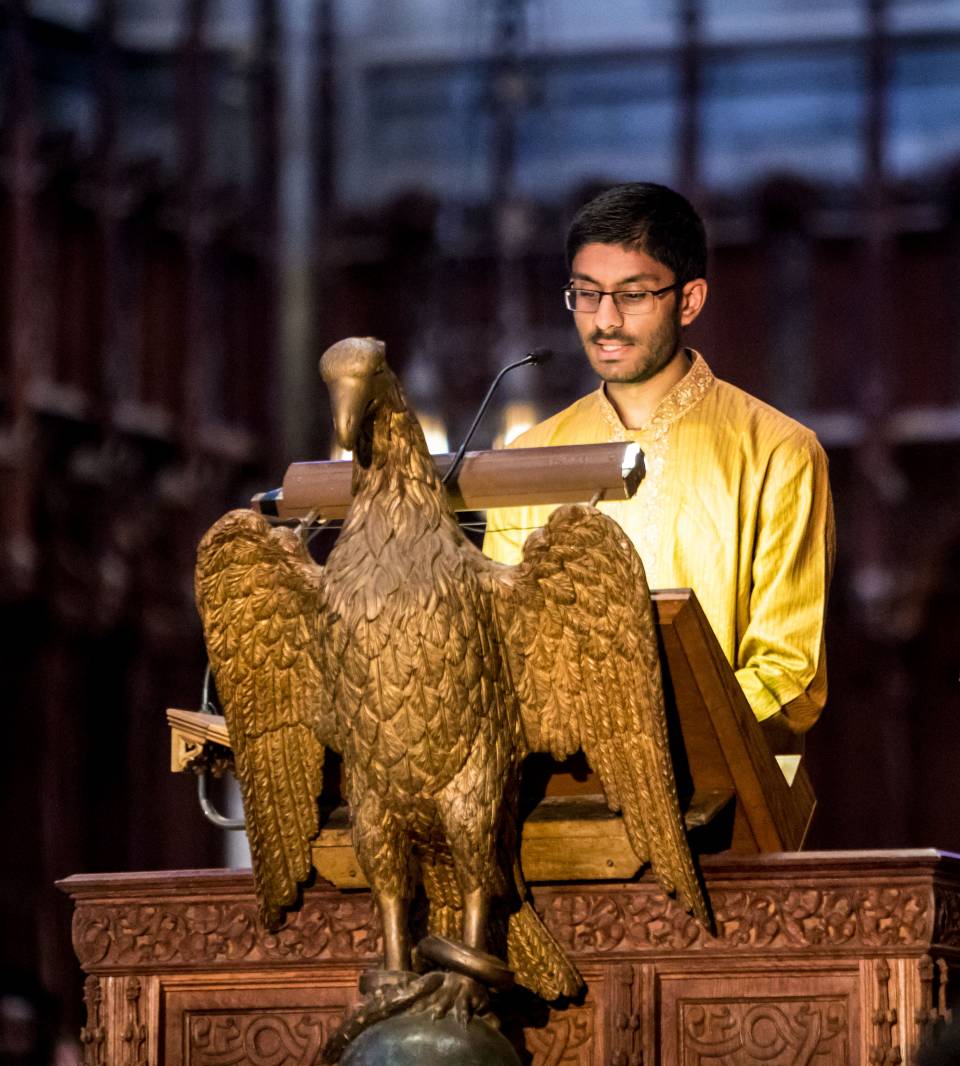 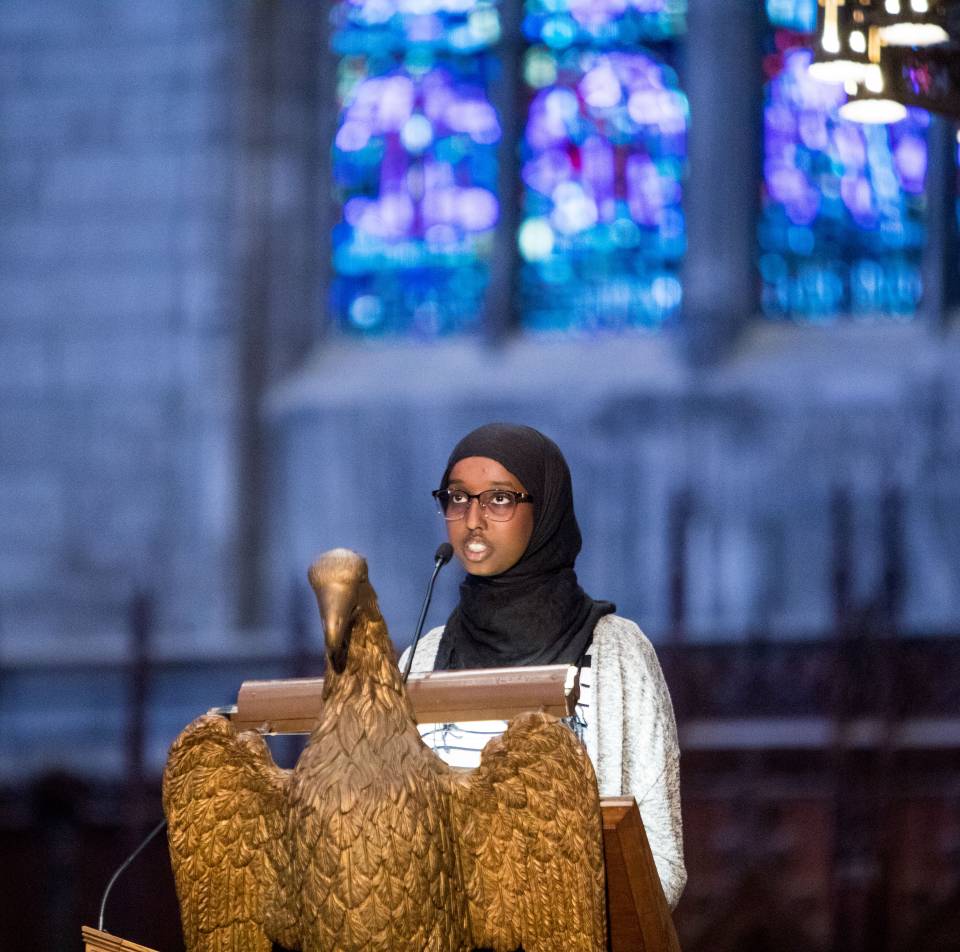 Opening Exercises included music, prayers and readings from various religious and philosophical traditions. Bhadrajee Hewage, a member of the Class of 2020, gives a reading from the Buddhist tradition.

Sirad Hassan, a member of the Class of 2020, reads from the Quran.

The art of disagreement, Eisgruber said, requires listening to the views of others and considering whether one's own views might need to change. It also requires "that we cultivate the human relationships and the trust that allow us to bridge differences and learn from one another," he said.

Added Eisgruber: "That is one reason why I disagree with people who consider inclusivity and free speech to be competing commitments. I believe exactly the opposite, namely, that if we are to have meaningful conversations about difficult topics on university campuses and in this country, we must care passionately both about the inclusivity that enables people to trust and respect one another and about the freedom of speech that encourages the expression of competing ideas."

There also will be times to speak up as part of the process of developing one's views or informing others. "Learning the art of disagreement can help you to choose the moments when it makes sense to speak, and to do so in ways that are effective, constructive and respectful of the other voices around you," said Eisgruber.

Such matters play a crucial role in developing as leaders, Eisgruber said.

"Some people think that leadership depends upon popularity — that it emanates from the approval and praise of a cheering crowd," he said. "The University is dedicated to a different view. We are committed to leadership through the rigorous and unstinting pursuit of truth. We believe that sometimes the greatest leadership and the most important insights come not from someone popular, famous or acclaimed, but from a lone, brave voice insisting on a fundamental principle."

In closing, as he expressed his hope for Princeton's newest students, Eisgruber said: "You have been admitted to this University because you have the capacity to become leaders. I hope you will embrace this University's commitment to leadership through the pursuit of truth and understanding; that you will develop and practice the art of disagreement; and that you will cultivate the courage to speak up even when your opinions seem unpopular. 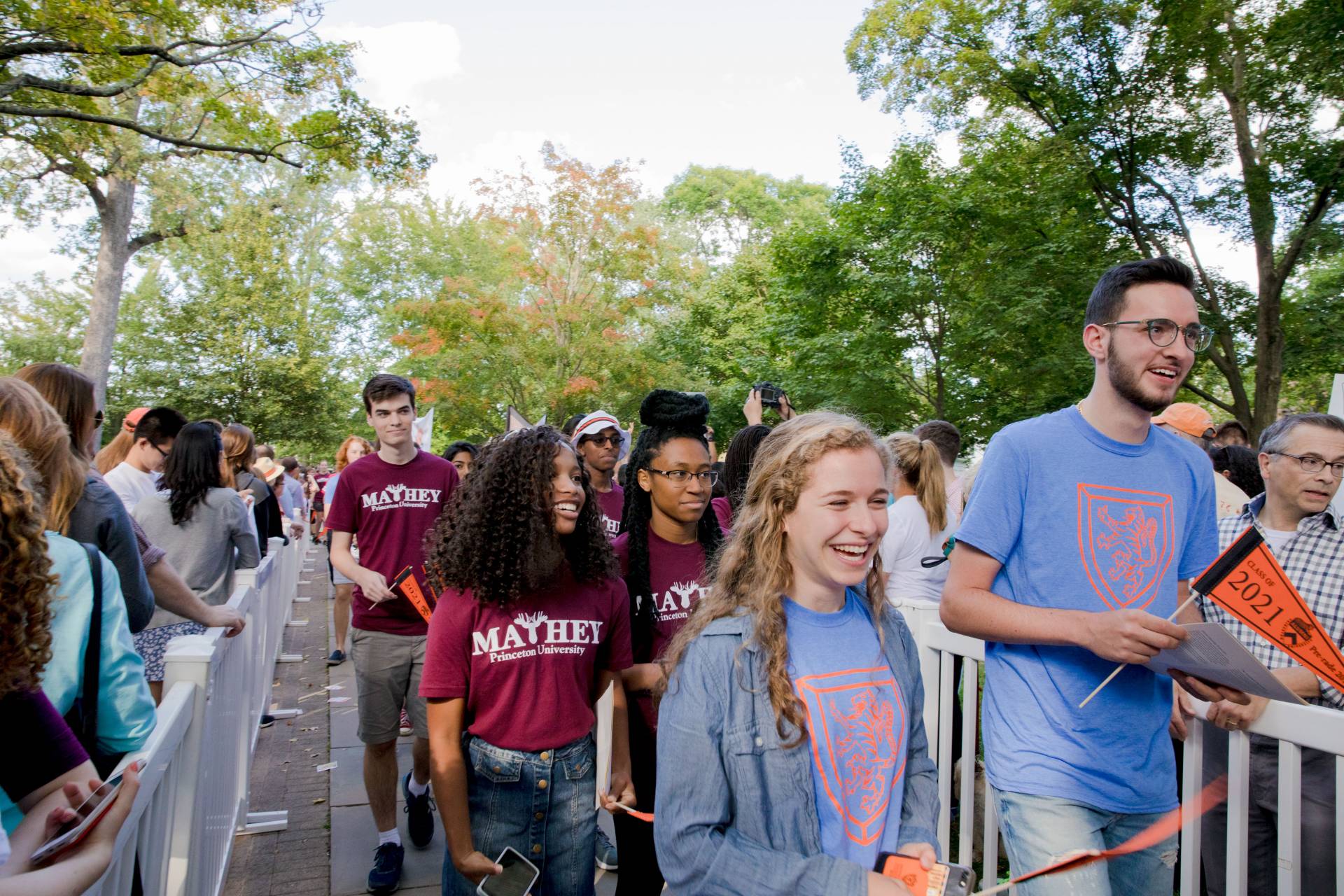 After the ceremony in the chapel, the Class of 2021 parades in the Pre-rade through the FitzRandolph Gate at the front of campus, cheered on by other students, alumni, faculty and staff.

Following the ceremony, first-year students left the chapel and participated in the "Pre-rade," a parade through the FitzRandolph Gate at the front of campus, where they were cheered on by other students, alumni, faculty and staff. In the evening, the freshman assembly offered an opportunity to further discuss the Pre-read book with Müller, moderated by Eisgruber. As the academic year progresses, students also will be able to participate in small-group discussions about the book in their residential colleges.

Opening Exercises was videotaped and will be archived online for later viewing. More photos from the ceremony and Pre-rade are available on the University's Facebook page and in an online gallery. 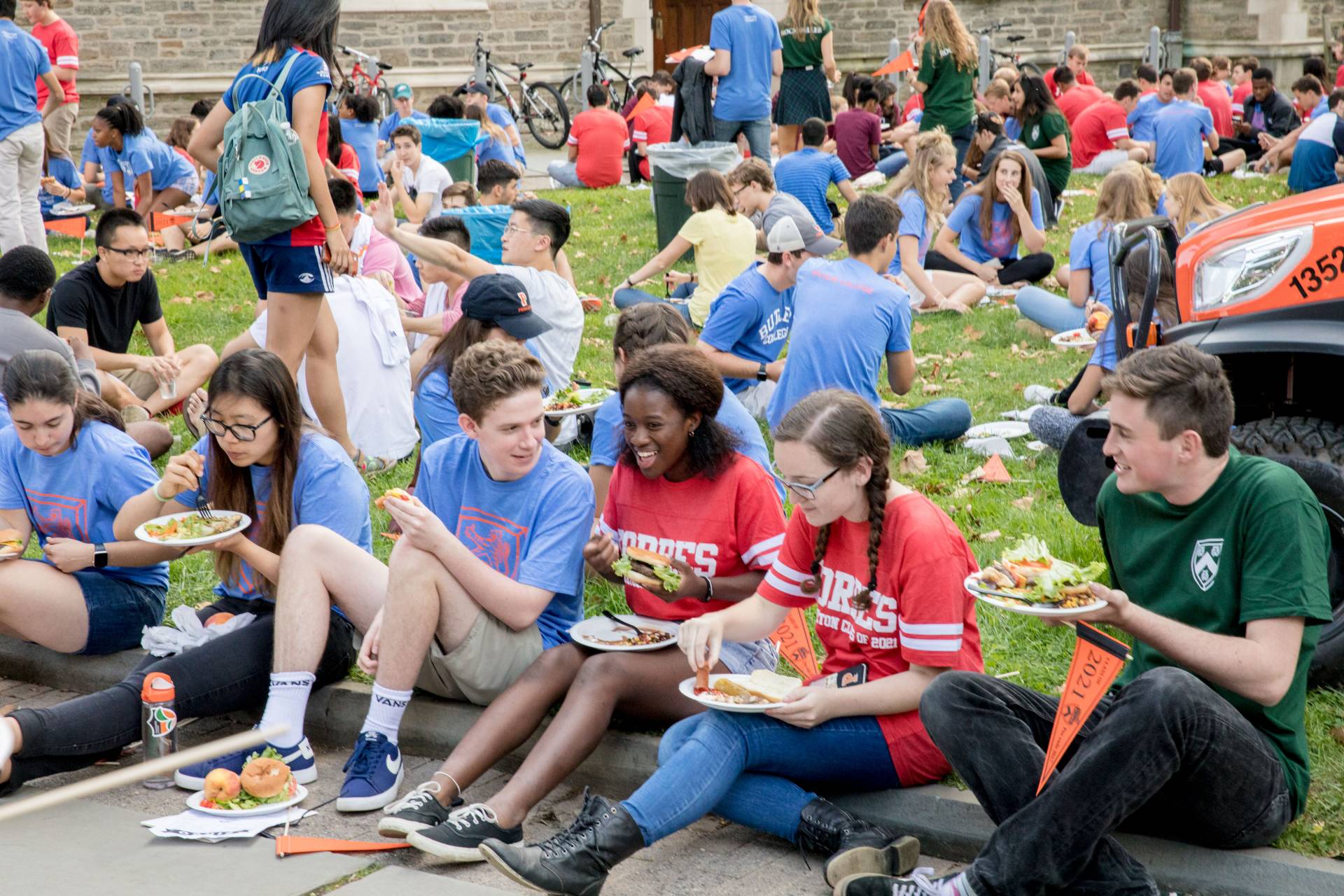 A picnic on Alexander Beach fortifies students as they participate in the day's activities.