Princeton University celebrated the accomplishments of its students with the awarding of four undergraduate prizes to six students at Opening Exercises on Sunday, Sept. 9. 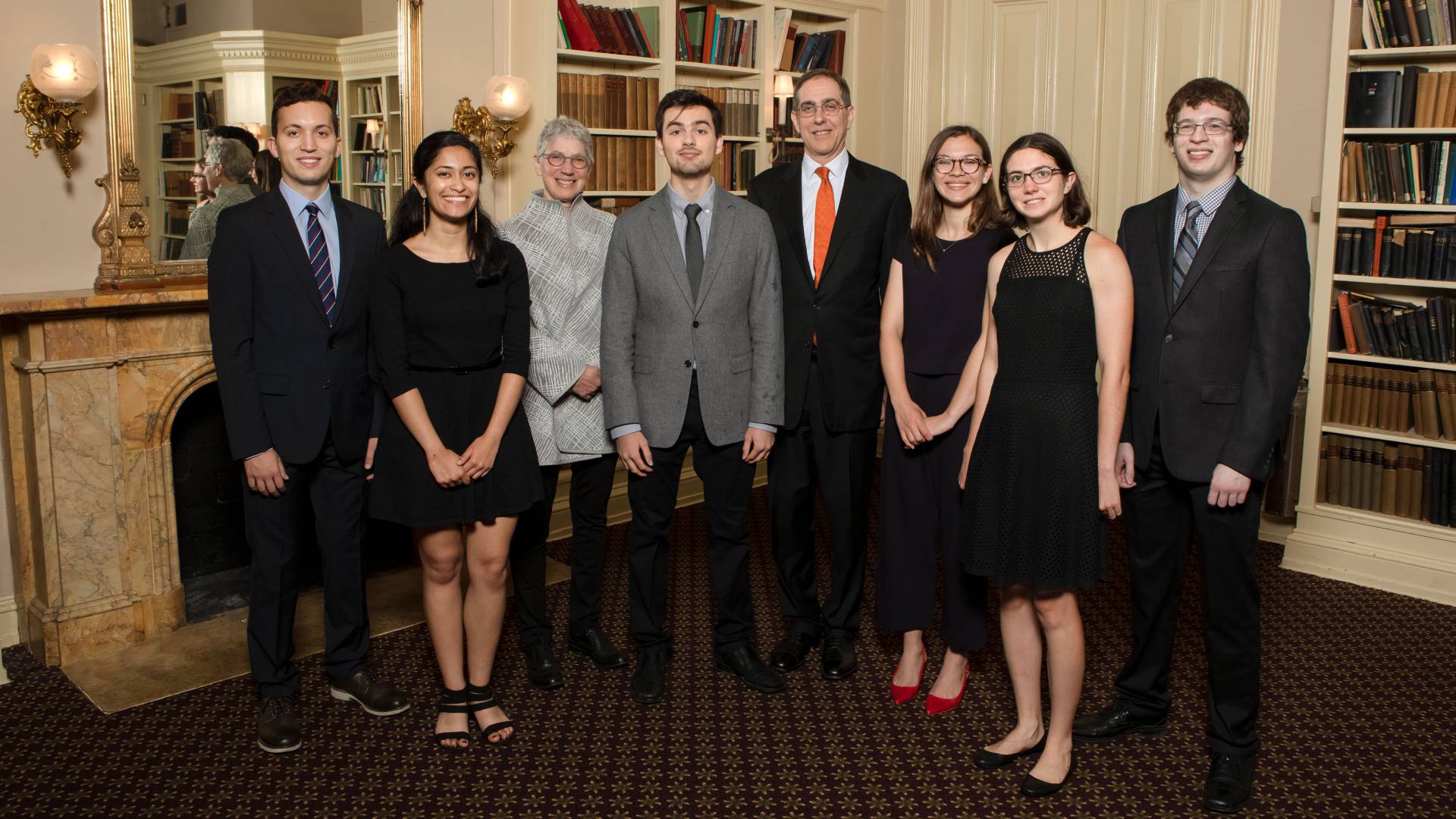 “We are delighted to honor this year’s prize winners,” Dean of the College Jill Dolan said. “They are model scholars who have achieved great academic success and they are model citizens who have made important contributions to the Princeton community and beyond. These students’ transcripts include an abundance of extra courses and A+ grades, and evidence of wide-ranging intellectual interests. We are proud of their deep commitment to their educational programs at Princeton.”

Devon Wood-Thomas received this year's Freshman First Honor Prize, which is awarded each year to sophomores in recognition of exceptional achievement during their first year.

Wood-Thomas, of McLean, Virginia, attended Thomas Jefferson High School for Science and Technology. He plans to pursue a major in physics and is also considering earning certificates in applied and computational mathematics and statistics and machine learning.

Wood-Thomas is a member of Rockefeller College. Outside the classroom, he enjoys singing and acting as a member of the William Trego Singers, Princeton University Players and Princeton Opera Company.

He spent this summer working in Princeton’s Department of Astrophysical Sciences conducting research on cosmology, specifically gravitational lensing of the cosmic microwave background to better map the distribution of dark matter halos.

This year's George B. Wood Legacy Sophomore Prize is shared by Markos Markakis and Grace Sommers. The prize is awarded each year to members of the junior class in recognition of exceptional academic achievement during sophomore year.

Markakis, of Thessaloniki, Greece, attended the high school there at Anatolia College. He is majoring in electrical engineering and pursuing certificates in applications of computing, robotics and intelligent systems, and statistics and machine learning.

He was a member of Forbes College his first two years at Princeton and served as a student technology consultant. He will be a member of Whitman College this academic year. He is an undergraduate grader for the Department of Computer Science.

Markakis is president of the Orange Panhellenic Association, the student-led Greek cultural group; and a member of Princeton Triangle Club.

He spent this past summer as a performance improvement intern in the advisory services division of Ernst & Young in Athens, Greece.

Sommers, of Bridgewater, New Jersey, attended Bridgewater-Raritan High School. A physics major, she is also pursuing certificates in applications of computing and Roman language and culture. Last year she was one of two recipients of the Freshman First Honor Prize.

Sommers was a member of Wilson College her first two years at Princeton and will be a member of Butler College this academic year. She has a passion for tutoring and mentorship and has worked as a physics tutor in the McGraw Center for Teaching and Learning and as an undergraduate grader for the Department of Computer Science. She has volunteered at Princeton’s climbing wall to help children with special needs. As a first-year student, she mentored an underprivileged sixth-grader from Princeton’s public middle school.

Sommers is a peer reviewer and copyeditor for the Princeton Undergraduate Research Journal. She has written for the space and physics section of the student-led science publication Innovation Magazine. Last fall, she was a “problem czar” for the Princeton University Physics Competition, held annually for high school students; this year she will serve as judging chair.

She spent summer 2017 on campus, programming a database of historic materials in the civil and environmental engineering department. Her work was part of the ReMatch program, which pairs undergraduate students with graduate student mentors.

This summer, she remained on campus, conducting research with Mariangela Lisanti, an assistant professor of physics. Sommers' time was spent coding and studying a simulation of a Milky Way-type galaxy to quantify the kinematics of its stars and dark matter. She plans to build on this research during this academic year.

This year's George B. Wood Legacy Junior Prize is shared by Annabel Barry and Trisha Datta. The prize is awarded to members of the senior class in recognition of exceptional academic achievement during junior year.

She is a member of Whitman College, where she is a peer academic adviser. She is co-editor-in-chief of The Nassau Literary Review, a fellow in the Writing Center and the undergraduate coordinator of the Princeton chapter of Minorities and Philosophy. She is a member of the Undergraduate Advisory Committee to the Department of English and a member of the Behrman Undergraduate Society of Fellows, a group of juniors and seniors who are committed to the study of humanistic inquiry and meet formally once a month during the academic year to discuss and debate matters of common interest in the company of faculty members and distinguished guests.

As a set designer, Barry has worked on productions with the Lewis Center for the Arts and with the student-led troupes Theatre Intime and Princeton Shakespeare Company.

In summer 2016, she interned at the Montefiore-Einstein Center for Bioethics through Princeton Internships in Civic Service. In summer 2017, with a Tim K. Vasen Summer Research Award from the Lewis Center for the Arts, she traveled along the border between Ireland and Northern Ireland, researching and writing a collection of creative nonfiction. This led to a junior independent paper on postcolonial critiques of cartography in contemporary Irish literature.

This past summer, Barry was a Princeton Bread Loaf Fellow at Oxford University, where she took a class on James Joyce and conducted senior thesis research on feminist philosopher and writer Mary Wollstonecraft in the Abinger Papers of the Bodleian Library.

After graduation, she plans to pursue a Ph.D. in literature and a career in literary criticism or the arts.

A member of Wilson College her first two years at Princeton, she will be a member of Butler College this academic year. She received the Shapiro Prize for Academic Excellence in 2016 and 2017, and the 2017 Lewis Center for the Arts Outstanding Work by a Sophomore Award for creative writing. At Princeton Research Day 2018 last spring, she received the Silver Undergraduate Talk Award for "Privacy-Preserving Traffic Obfuscation for Smart Home IoT Devices" and has presented results of her research at conferences in Budapest, Hungary; Washington, D.C.; Cambridge, Massachusetts; and Philadelphia.

Datta has served as president of Princeton South Asian Theatrics and as an engineering school tour guide.

This summer, she was a software engineering intern at Flatiron Health in New York City. Previous summer internships include Google in New York City; Microsoft in Redmond, Washington; and Applied Communication Sciences in Basking Ridge, New Jersey. After graduation, she is considering pursuing a Ph.D. in computer science or returning to Flatiron Health.

Matthew Tyler received the Class of 1939 Princeton Scholar Award, which is awarded each year to the undergraduate who, at the end of junior year, has achieved the highest academic standing for all preceding college work at the University. Last year, he was awarded the George B. Wood Legacy Sophomore Prize, and in 2016 he was a co-recipient of the Freshman First Honor Prize.

Tyler, of Spencerport, New York, attended Spencerport High School. He is a mathematics major and is pursuing certificates in applications of computing, and applied and computational mathematics.

Tyler is a member of Mathey College. He is president of the math club and a "problem czar" for the Princeton University Mathematics Competition, held annually for high school students. He also is a member of the juggling club.

He participated in the Princeton-in-Munich program in summer 2016.

In summer 2017, he worked at Princeton with Richard Taylor, a visiting lecturer with the rank of professor in mathematics, on learning commutative algebra and algebraic geometry.

This past summer, he participated in the Research Experiences for Undergraduates program at Emory University, researching p-adic modular forms and monstrous moonshine. After graduation, he plans to pursue a Ph.D. in mathematics.