In 1993, Morrison became the first African American to be awarded the Nobel Prize in Literature. Morrison joined the Princeton faculty in 1989 and was a member of the University’s creative writing program until she transferred to emeritus status in 2006.

“It is with profound sadness we share that, following a short illness, our adored mother and grandmother, Toni Morrison, passed away peacefully last night surrounded by family and friends,” shared the Morrison family in a statement. “She was an extremely devoted mother, grandmother and aunt who reveled in being with her family and friends. The consummate writer who treasured the written word, whether her own, her students or others, she read voraciously and was most at home when writing. Although her passing represents a tremendous loss, we are grateful she had a long, well lived life.” 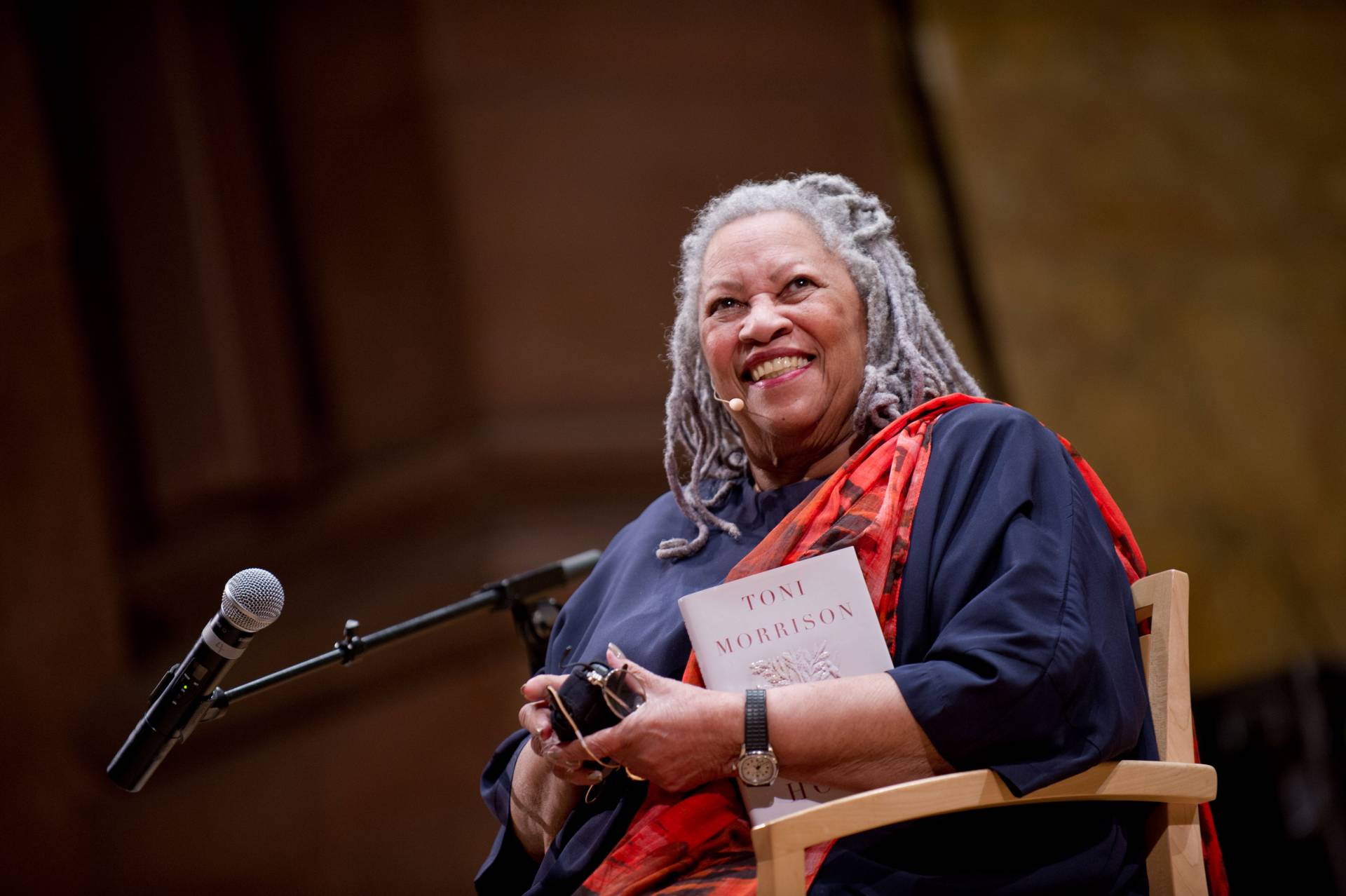 “While we would like to thank everyone who knew and loved her, personally or through her work, for their support at this difficult time, we ask for privacy as we mourn this loss to our family,” the family continued.  “We will share information in the near future about how we will celebrate Toni’s incredible life.”

In addition to the Nobel Prize, Morrison won a Pulitzer Prize for “Beloved” in 1988 and a National Book Critics Circle Award for “Song of Solomon” in 1978. In May 2019, she received the gold medal from the American Academy of Arts and Letters. She was awarded the American Academy of Arts and Sciences Emerson-Thoreau Medal in 2016, the Presidential Medal of Freedom in 2012, and the National Humanities Medal in 2000. Evincing her international readership are two major awards from France: the Ordre National de la Légion d’honneur in 2010; and the Commandeur de l’Ordre des Arts et des Lettres in 1993.

Morrison is also an acclaimed essayist and librettist. She wrote children’s books with her son Slade Morrison. This summer, a documentary of her life, “Toni Morrison: The Pieces I Am,” was released in theaters.

Morrison taught courses at Princeton in the humanities and African American studies. One of her courses led to her 1992 book of literary criticism, “Playing in the Dark: Whiteness and the Literary Imagination.” As a faculty member with the creative writing program, she advised such students as the now-published writers David Treuer, Ladee Hubbard, Kate Morgenroth, MacKenzie Tuttle and Rachel Kadish.

“Toni Morrison’s brilliant vision, inspired creativity, and unique voice have reshaped American culture and the world’s literary tradition,” said Princeton President Christopher L. Eisgruber. “Her magnificent works will continue to light a path forward for generations of readers and authors. She revised this University, too. Through her scholarly leadership in creative writing and African American studies, and through her mentorship of students and her innovative teaching, she has inscribed her name permanently and beautifully upon the tapestry of Princeton’s campus and history. We are fortunate that this marvelous writer made Princeton her home, and we will miss her dearly.”

Morrison’s arrival helped to attract other faculty and students from traditionally underrepresented backgrounds to Princeton, and she played a catalytic role in expanding Princeton’s commitments both to the creative and performing arts and to African American studies. In 1994 she founded the Princeton Atelier, bringing together undergraduate students in interdisciplinary collaborations with acclaimed artists and performers such as Jacques d’Amboise, A.S. Byatt, Peter Sellars, Yo-Yo Ma, Richard Danielpour, Bernice Johnson Reagon, Gabriel Garcia Márquez, Anonymous 4, Richard Price, Pig Iron Theatre Company, Maria Tucci and Allegro Kent among others.

In honor of Morrison’s career achievements and contributions to Princeton, the University dedicated Morrison Hall, formerly West College, in 2017. The building houses the Office of the Dean of the College and faces Cannon Green behind Nassau Hall. A portrait of Morrison by Paul Wyse hangs in the building.

Morrison had key roles in numerous commemorative events at Princeton. In 1996, she gave the keynote address — “The Place of the Idea, The Idea of the Place” — as the University celebrated its 250th anniversary.

“The place of the idea represents the value of tradition, of independence; the idea of the place is its insightful grasp of the future,” Morrison said. “Negotiating those two ideas, conservation and change, is no small matter. It demands work; it demands work and intelligence of the highest order. And they're not necessarily adversarial ideas, and even when they appear so that irreconcilability is the clash that stirs inquiry and fosters knowledge.”

In 2005, Morrison was the Baccalaureate speaker for the graduating class. In 2012, she returned “home” to campus to read from her new novel — her 10th — called “Home.”

“Teaching is the second best thing to writing for me,” Morrison told a packed audience on that occasion. “What a pleasure it is and how truly intellectually exciting it is to teach at Princeton.”

At the Princeton and Slavery Symposium, held in 2017, Morrison described Lorain, in the 1930s, as a mixed neighborhood where “everybody was dirt poor, that was what we had in common,” and where “we gardened because we ate it, not because it was a cute little thing to do.” While her older sister remembered racial slurs by some neighbors, Morrison said she did not. Rather, she first learned about race when she went to the historically black college Howard University in Washington, D.C.

“All of a sudden, the buses have labels on who sat where, and there were fountains that said ‘colored’ and ‘white.’ And I thought that was a hoot because who would spend money on doing that twice? How wasteful,” Morrison said.

Racial integration was a theme for her book “Remember: The Journey to School Integration,” her first historical work for young people for which she received the American Library Association’s 2005 Coretta Scott King Award.

Morrison earned a B.S. in English at Howard University in 1953 and a M.A. in American literature at Cornell University in 1955. She was an English instructor at Texas Southern University and Howard University before becoming a senior editor in the trade department at Random House publishing in New York, where she spent 20 years. Before joining the Princeton faculty, Morrison held the Albert Schweitzer Chair in the Humanities at the State University of New York-Albany. She also has taught at Yale University, Bard College and Rutgers University.  Princeton awarded Morrison an honorary doctoral degree in 2013.

Morrison's papers are part of the Princeton University Library’s permanent collection. Starting August 13, the display case in the Firestone Library lobby will feature a selection from Morrison's papers. The display will include first editions, translations, corrected typescripts, and a handwritten first draft of her novels. Students and scholars may find more information online about the  Toni Morrison Papers, which are permanently housed in PUL’s Rare Books and Special Collections.

Last spring, Princeton awarded its inaugural Toni Morrison Prize, which is given to one or more graduating seniors whose individual or collaborative artistic practice has pushed the boundaries and enlarged the scope of our understanding of issues of race.

The narrative of your life “is yours to write,” Morrison told members of the Class of 2005 at Princeton University’s Baccalaureate service on Sunday, May 29.

“Of course I am a storyteller and therefore an optimist, a firm believer in the ethical bend of the human heart, a believer in the mind’s appetite for truth and its disgust with fraud,” said Morrison addressing graduating seniors in 2005. “I’m a believer in the power of knowledge and the ferocity of beauty, so from my point of view your life is already artful — waiting, just waiting, for you to make it art.”

Morrison is survived by her son Harold Ford Morrison and three grandchildren. She was predeceased by her son Slade.

View or share comments on a blog intended to honor Morrison's life and legacy.