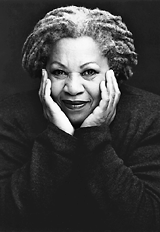 Award-winning author and Princeton professor Toni Morrison has been chosen as the speaker for this year's Baccalaureate, the interfaith worship service that is one of Princeton's oldest traditions. The ceremony is scheduled for 2 p.m. Sunday, May 29.

Morrison, the Robert F. Goheen Professor in the Humanities, was awarded the Nobel Prize in literature in 1993. She was the first African-American winner and the first American woman to win since 1938. She won the National Humanities Medal in 2000 for her contributions to American cultural life and thought, the Pulitzer Prize in 1988 for "Beloved" and the National Book Critics Award in 1977 for "Song of Solomon." She has served on the Princeton faculty since 1989.

"We are both honored and delighted that Toni Morrison has accepted our invitation to be the keynote speaker during this year's Baccalaureate ceremony," the leaders of the class of 2005 said in a statement. "The Baccalaureate ceremony is an interfaith celebration of the senior class and a time to reflect on our Princeton experience. Dr. Morrison's intimate ties with the University, in addition to her wealth of experience as an accomplished, Nobel Prize-winning author, professor and cultural icon, make her the perfect fit for this ceremony. Furthermore, she has an incredible gift of reaching beyond boundaries to build bridges between people in a community. Dr. Morrison's message will resonate with our peers as the class of 2005 gathers in unison to celebrate our Princeton past and our bright futures."

Morrison recently was named a recipient of the American Library Association's 2005 Coretta Scott King Award, which honors African-American authors and illustrators of outstanding books for children and young adults. She won for her 2004 book, "Remember: The Journey to School Integration," her first historical work for young people. The other novels she has written include "Love," "The Bluest Eye," "Sula," "Tar Baby," "Jazz" and "Paradise."

In addition to enriching the field of literature, Morrison has created collaborative works with artists in other disciplines, including Kathleen Battle, Bill T. Jones, André Prévin, Richard Danielpour and Jessye Norman. This kind of collaboration inspired her to create the Princeton Atelier, where students and artists from different media create works that are then performed or exhibited.

Morrison received a bachelor's degree in English from Howard University in 1953 and a master's degree in American literature from Cornell University in 1955. Before coming to Princeton to teach literature and writing, she was a senior editor at Random House for 20 years. She has held teaching posts at Yale, Bard College and Rutgers. The New York State Board of Regents appointed her to the Albert Schweitzer Chair in the Humanities at the State University of New York at Albany in 1984, a position she held until 1989.

Baccalaureate is an end-of-the-year ceremony focused on members of the senior class. Held in the University Chapel, it includes prayers and readings from various religious and philosophical traditions. The earliest recorded Baccalaureate address -- titled "Religion and the Public Spirit" -- was delivered by President Samuel Davies in 1760 to the 11 members of the graduating class. Since 1972, the address has been given by a speaker chosen by the president after discussion with class leaders.

Toni Morrison to read from her new novel