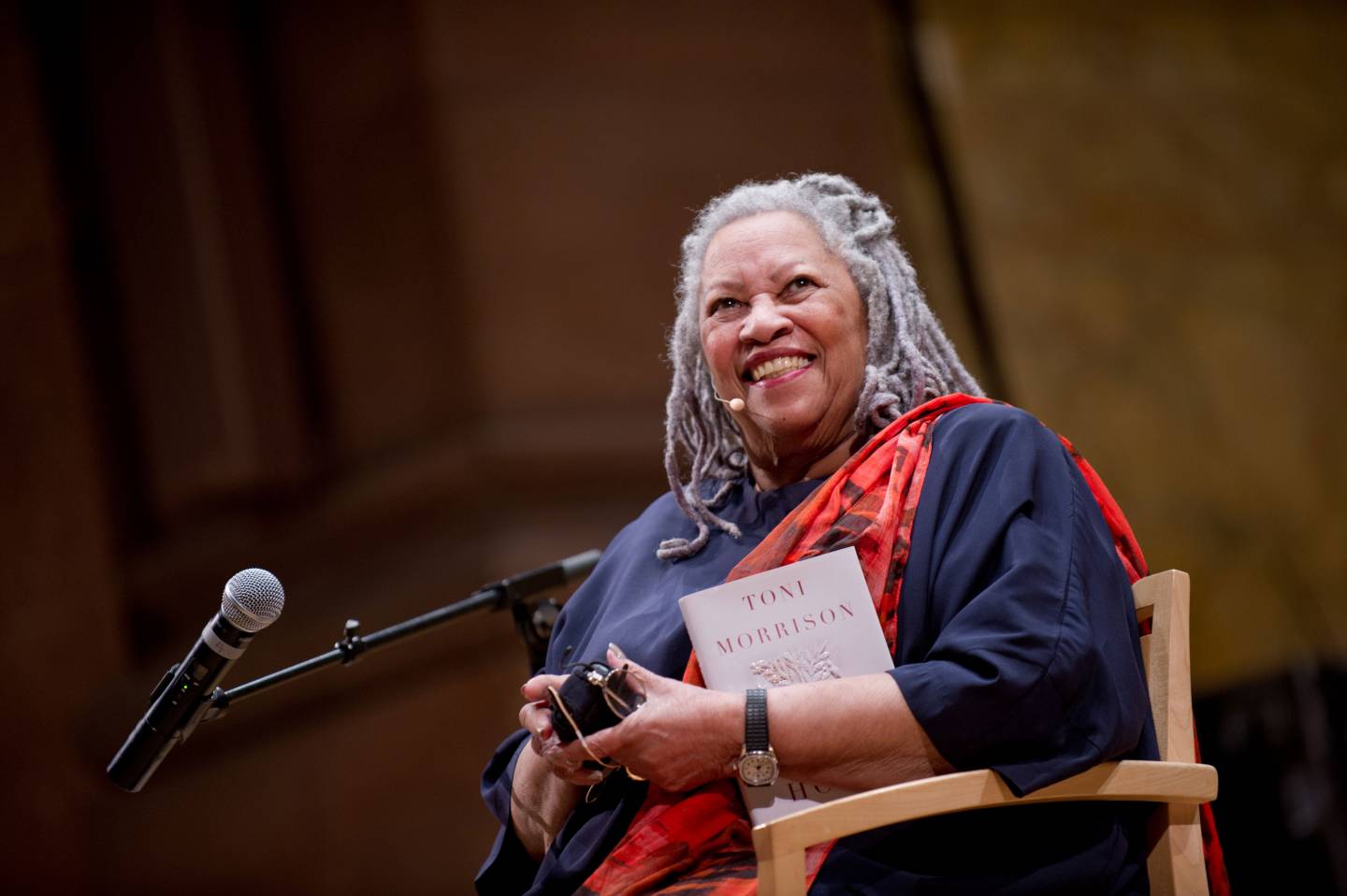 Princeton University trustees have approved a recommendation to name West College for the Nobel Laureate Toni Morrison. Morrison is the Robert F. Goheen Professor in the Humanities, Emerita, at Princeton, and a recipient of the 1993 Nobel Prize in literature. The recommendation was made by the Council of the Princeton University Community (CPUC) Committee on Naming, which was established to advise the trustees on the naming of "buildings or other spaces not already named for historical figures or donors to recognize individuals who would bring a more diverse presence to the campus."

Princeton University's trustees have approved recommendations to name West College, a prominent and central campus building, for the Nobel laureate Toni Morrison, an emeritus faculty member at Princeton, and to name the major auditorium in the Woodrow Wilson School of Public and International Affairs for Sir Arthur Lewis, a Nobel laureate in Economics, who served on the school's faculty from 1963 to 1983. The name of former University President Harold Dodds will be transferred from the auditorium to the adjacent atrium that serves as the entryway into Robertson Hall. The new names will take effect on July 1.

The recommendations were made by the Council of the Princeton University Community (CPUC) Committee on Naming, a committee composed of faculty, students, staff and alumni that was established in the fall of 2016 to advise the trustees on the naming of "buildings or other spaces not already named for historical figures or donors to recognize individuals who would bring a more diverse presence to the campus."

The committee made its recommendations after seeking suggestions from throughout the University community, including through a website that provided background information about the two spaces that the trustees asked it to consider. More than 210 people submitted suggestions through the website.

Morrison taught courses at Princeton in the humanities and African American studies. One of her courses led to a book entitled "Playing in the Dark." After several years she joined the creative writing program where she advised such students as David Treuer, Ladee Hubbard, Kate Morgenroth, MacKenzie Tuttle and Rachel Kadish, now published writers.

Her arrival helped to attract other faculty and students of color to Princeton, and she played a catalytic role in expanding Princeton's commitments both to the creative and performing arts and to African American studies. In 1994 she founded the Princeton Atelier, bringing together undergraduate students in interdisciplinary collaborations with acclaimed artists and performers such as Jacques d'Amboise, A.S. Byatt, Peter Sellars, Yo-Yo Ma, Richard Danielpour, Bernice Johnson Reagon, Gabriel Garcia Márquez, Anonymous 4, Richard Price, Pig Iron Theatre Company, Maria Tucci and Allegra Kent among others.

In 1996 she gave the keynote address — "The Place of the Idea, The Idea of the Place" — as Princeton celebrated its 250th anniversary, and in 2013 the University awarded her an honorary doctorate.

In addition to the Nobel Prize, Morrison won a National Book Critics Circle Award for "Song of Solomon" in 1977; a Pulitzer Prize for "Beloved" in 1988; the Commandeur de l'Ordre des Arts et des Lettres in 1993; the National Humanities Medal in 2000; the Ordre National de la Légion d'honneur in 2010; and the Presidential Medal of Freedom in 2012. She was honored with the American Academy of Arts and Sciences Emerson-Thoreau Medal in 2017.

Morrison Hall and Nassau Hall, as seen across Cannon Green.

In 2016 the Princeton University Library announced that the major portion of Morrison's papers, which had been part of the permanent library collections since 2014, were open for research to students, faculty and scholars worldwide. In announcing that her papers would be permanently housed at Princeton, Princeton University President Christopher L. Eisgruber said: "Toni Morrison's place among the giants of American literature is firmly entrenched… We at Princeton are fortunate that Professor Morrison brought her brilliant talents as a writer and teacher to our campus 25 years ago, and we are deeply honored to house her papers and to help preserve her inspiring legacy."

In its report to the trustees, the Naming Committee recommended "that Princeton further preserve Toni Morrison's legacy — and especially her commitments to teaching, to the arts, to diversity and inclusion, and to 'The Place of the Idea, The Idea of the Place' — by inscribing her name on the building that stands at the heart of the undergraduate academic and co-curricular experience at Princeton, housing as it does, among other offices, the dean of the college, the dean of undergraduate students, and the offices of admission, financial aid and the registrar."

West College is one of the oldest buildings on the Princeton campus. It was initially constructed in 1836 as a dormitory on the west side of Cannon Green, across from a dormitory known as East College that had been constructed two years earlier and that was removed in 1897 to make way for Pyne Library, which is now known as East Pyne. From the beginning, the "west" in West College referred only to the fact that it was located to the west of Cannon Green. 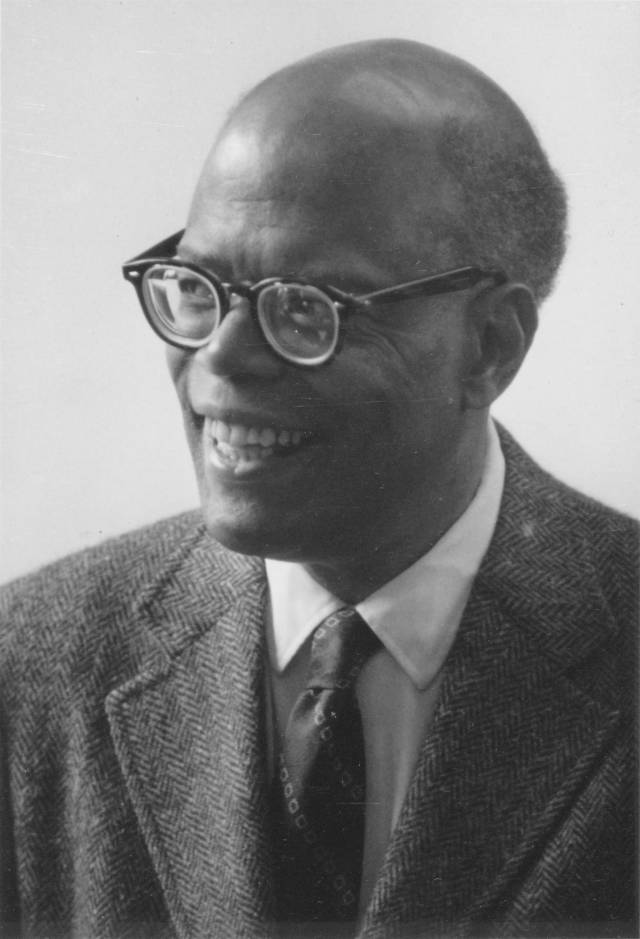 Princeton trustees also have approved a recommendation to name the major auditorium in the Woodrow Wilson School of Public and International Affairs for Sir Arthur Lewis, a Nobel laureate in economics, who served on the school's faculty from 1963 to 1983.

The Naming Committee noted that Sir W. Arthur Lewis "is an example of someone who brought distinction and diversity to this campus over many years, but whose accomplishments and impact are not known to succeeding generations of Princetonians."

Lewis joined the Princeton faculty in 1963 as a professor of economics and international affairs, and later was appointed the James Madison Professor of Political Economy. He taught undergraduate and graduate courses in economic development and economic history. The New York Times reported that "students praised Sir Arthur's courses for focusing on ideas rather than numbers." He retired from the faculty in 1983, but remained associated with the University in emeritus status until his death in 1991.

Lewis was knighted in 1963. In 1979 he won the Nobel Prize in economics. A native of St. Lucia, he was the first person of African descent to be appointed a professor in Great Britain's university system. Over the course of his career he published over 80 professional articles and wrote 12 books.

Lewis' Nobel Prize recognized his pioneering research into economic development, with particular consideration of the problems of developing countries. In making its recommendation, the Naming Committee noted that "the scope of his research was truly international, and in our judgment it is important to have that message — along with a message about diversity and inclusion — associated with Princeton's School of Public and International Affairs."

Beyond his scholarly distinction and commitment to teaching, Lewis also epitomized the Princeton tradition of public service. He served as economic adviser to the government of Ghana when it gained independence in 1957 and served as a consultant to such other nations as Trinidad and Tobago, Jamaica, Nigeria and Barbados. He served as the first West Indian-born principal and then vice chancellor of the University of the West Indies; chancellor of the University of Guyana; managing director of the United Nations Special Fund; and first president of the Caribbean Development Bank. Arthur Lewis Community College on his home island of St. Lucia is named in his honor. 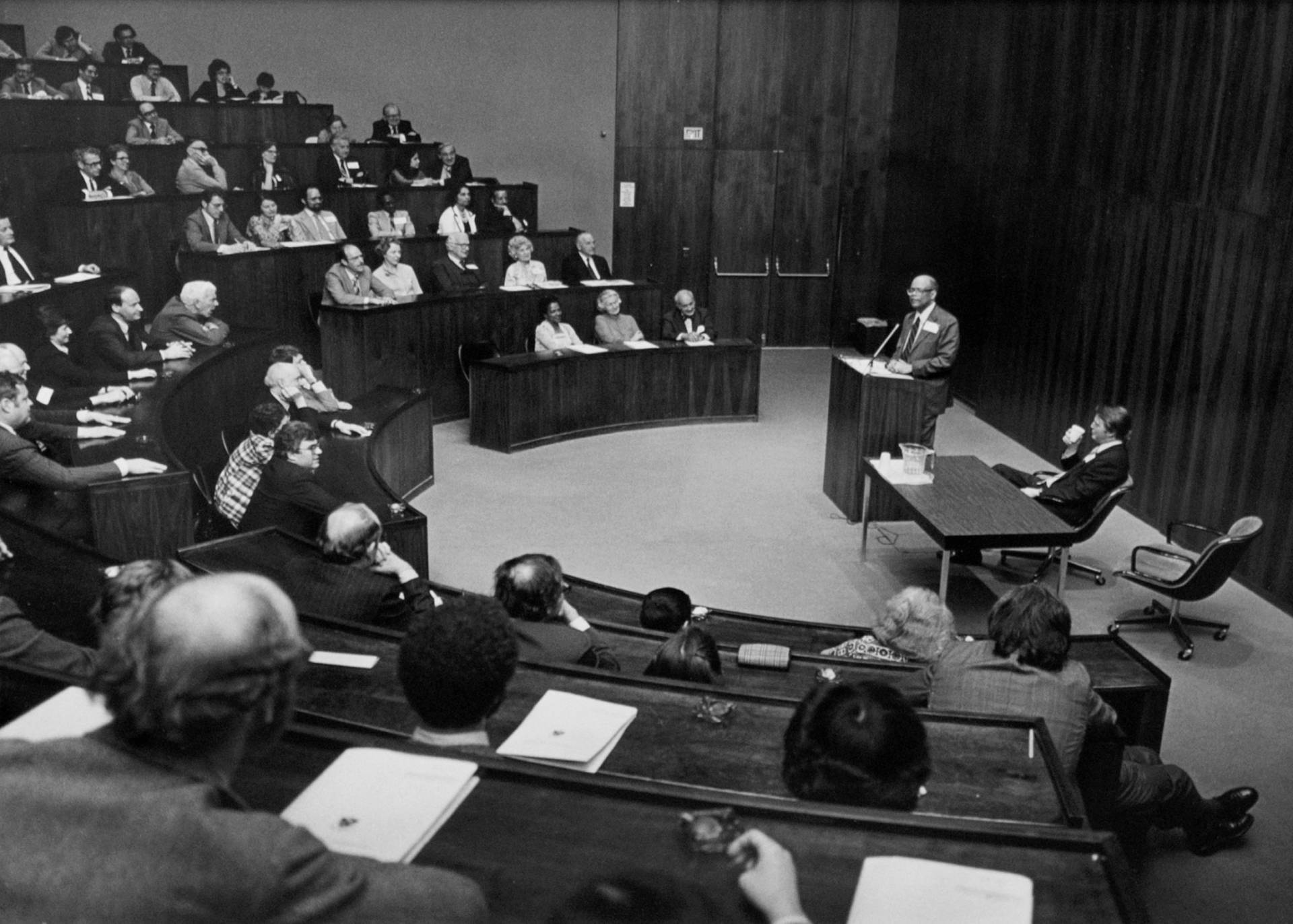 In this photo from the 1970s, Sir Arthur Lewis, who served as the James Madison Professor of Political Economy at Princeton, gives a lecture in the auditorium at the Woodrow Wilson School. As of July 1, the auditorium will be named the Arthur Lewis Auditorium.

Photo courtesy of the Lewis Family

In making its recommendation that the auditorium in Robertson Hall be named for Arthur Lewis, the Naming Committee noted that it is one of the most prominent teaching spaces in the school in which he taught. The committee also noted the critical administrative roles that Harold Dodds played in the development of the Woodrow Wilson School, first as chair of the faculty committee that initially directed the school, and then as Princeton's 15th president. During his presidency he helped raise the funds necessary to provide endowment support for the school, create a graduate program, and construct the building now known as Corwin Hall, which originally was located at the corner of Washington Road and Prospect Avenue and was known as Woodrow Wilson Hall. 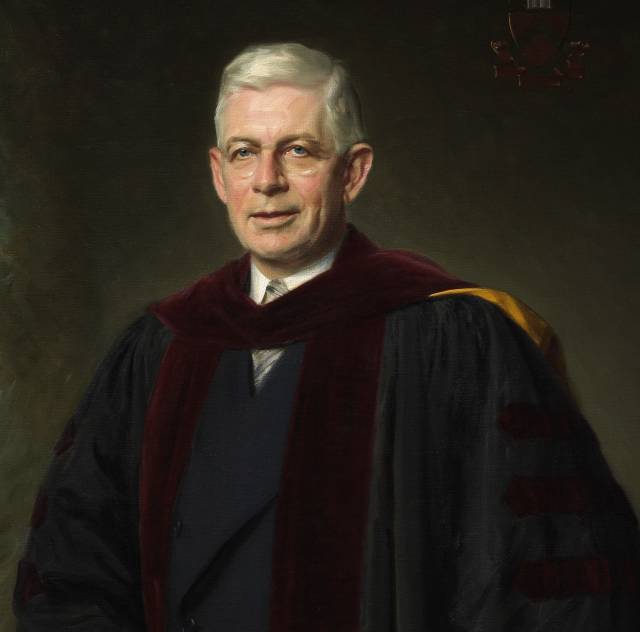 As part of the recommendations made by the CPUC Committee on Naming, the atrium in Robertson Hall will be named Dodds Atrium in honor of Harold Willis Dodds, Princeton's 15th president. The atrium is the principal entryway in the Wilson School. Dodds served as University President from 1933 to 1957.

"The atrium in Robertson Hall serves as the principal entryway into the Wilson School, and in our view it would be more than fitting to name that space for Harold Dodds, in honor of his central role in creating the school, while naming the auditorium for Arthur Lewis," the committee wrote. "Because there are other facilities at Princeton, including a science library and a center for the arts, named for another Lewis, we strongly encourage that the name of the auditorium be the Arthur Lewis Auditorium, and that there be appropriate iconography to introduce future generations to the enormous contributions that Arthur Lewis made to this University and to the world."

Eisgruber said, "I am very grateful to the Naming Committee for these excellent recommendations, and I am delighted that Princeton will now be able to honor and commemorate Toni Morrison and Arthur Lewis for their pioneering contributions to this University and to the world, while also continuing to recognize the leadership of President Dodds in helping to create the school that brought Arthur Lewis to Princeton.

"By taking these steps we begin to recognize more completely the extraordinary range of individuals and groups that have made this University what it is today, and to inscribe upon the fabric of our campus a fuller account not only of Princeton's history, but also of the commitments to both excellence and inclusivity that must guide our aspirations for the future."