The Princeton University Board of Trustees has called for an expanded and more vigorous commitment to diversity and inclusion at Princeton, with concerted efforts not only to implement a broad range of existing initiatives, but to take additional actions, including those proposed by a special trustee committee that was appointed last fall to consider the legacy of Woodrow Wilson at Princeton.

The board agreed to designate a trustee committee on diversity and inclusion to ensure regular and active trustee attention and accountability for achieving these goals. The board believes these goals are fundamental to Princeton achieving its mission of teaching, research, and service.

In adopting the report and recommendations of the special committee (PDF), the trustees strongly reaffirmed the University's determination "to be a university where people of all backgrounds and perspectives are welcomed, valued, and respected; where they learn with and from each other; and where all feel that the Princeton they attend is their Princeton."

The trustees accepted the committee's recommendation that the school of public and international affairs and the undergraduate residential college that bear Wilson's name should continue to do so, but that the University also must be "honest and forthcoming about its history" and transparent "in recognizing Wilson's failings and shortcomings as well as the visions and achievements that led to the naming of the school and the college in the first place."

The committee recommended and the board approved new initiatives in four areas:

* Encourage and support a broad range of education and transparency initiatives to create a more multi-faceted understanding and representation of Wilson on campus and to focus attention on aspects of Princeton's history that have been forgotten, overlooked, subordinated, or suppressed;

* Diversify campus art and iconography to reflect the diversity and inclusivity of today's Princeton; and 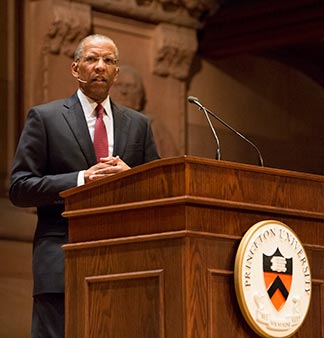 Brent Henry, vice chair of the Princeton Board of Trustees and chair of a special trustee committee that considered the legacy of Woodrow Wilson at the University, presides over a two-hour open forum in Richardson Auditorium on campus Feb. 19. The forum was one of several sessions at which the committee sought viewpoints on Wilson, who was president of Princeton from 1902 to 1910. (Photo by Denise Applewhite, Office of Communications)

The 10-member committee was chaired by the vice chair of the board, Brent Henry. The committee developed its recommendations over nine meetings between early December and late March. It created a website to collect observations and opinions about Wilson and his legacy and it received more than 635 submissions from undergraduates, graduate students, faculty, staff, alumni, and members of the general public. At its invitation, nine scholars and biographers posted their understandings of Wilson and his legacy on the website.

"We are deeply appreciative to all who shared their views with us, in person and on our website," Henry said. "This has been a learning experience for us and for the University community, and it has reminded us how much we can learn when we listen to one another, as we have throughout this process and as we need to continue to do. As we say in our report, we all need to acknowledge the challenges that confront us today and the shortcomings of our past as we focus together on the Princeton we want to become and the steps we all must take to get there."

Board chair Katie Hall said: "I want to thank the members of the special committee for conducting this review in a way that allowed many voices to be heard and encouraged informed and thoughtful discussion of important issues. The board strongly endorsed the committee's report and recommendations, including its call for a renewed and expanded commitment to diversity and inclusion, and for much greater transparency in representing Wilson and his legacy, as well as the rest of our history, on our campus."

The school and the college

Formal trustee action to name Princeton's school of public and international affairs for Wilson took place in 1935, while the naming of Princeton's first residential college for Wilson was approved by the trustees upon the recommendation of students in the 1950s and 1960s who wanted to create a residential arrangement on campus similar to one that Wilson had proposed while president of the University.

In arriving at its decision about the naming of the school and the college, the committee noted that many of Wilson's views and actions as president of the University and as president of the country "speak directly to our values and aspirations" for the school and for the college…. There is considerable consensus that Wilson was a transformative and visionary figure in the area of public and international affairs [and] that he did press for the kinds of living and learning arrangements that are represented today in Princeton's residential colleges… These were the reasons Wilson's name was associated with the school [and] the college…."

However, the committee also noted that some of Wilson's "views and actions clearly contradict the values we hold today about fair treatment for all individuals, and our aspirations for Princeton to be a diverse, inclusive, and welcoming community." Of particular concern, the committee said, are "the position he took as Princeton's president to prevent the enrollment of black students and the policies he instituted as U.S. president that resulted in the re-segregation of the federal civil service."

In retaining Wilson's name, "contextualization is imperative," the committee said. "Princeton must openly and candidly recognize that Wilson, like other historical figures, leaves behind a complex legacy of both positive and negative repercussions, and that the use of his name implies no endorsement of views and actions that conflict with the values and aspirations of our times. We have said that in this report, and the University must say it in the settings that bear his name."

In endorsing the proposed pipeline program to encourage more students from underrepresented groups to pursue doctoral degrees, the board recognized that diversifying the ranks of faculty, graduate students, and post-docs has to begin at the graduate student level.

The proposed program would draw inspiration from successful existing programs at the undergraduate level, including the national program sponsored by the Leadership Enterprise for a Diverse America (LEDA). It would identify highly qualified undergraduates from a broad range of colleges and universities and encourage and prepare them to pursue doctoral degrees by providing them with opportunities at Princeton to gain research experience, mentorship opportunities, and an understanding of how graduate school works.

The trustees authorized the administration and the faculty to proceed with the actions necessary to allow Princeton to implement this program as soon as possible. 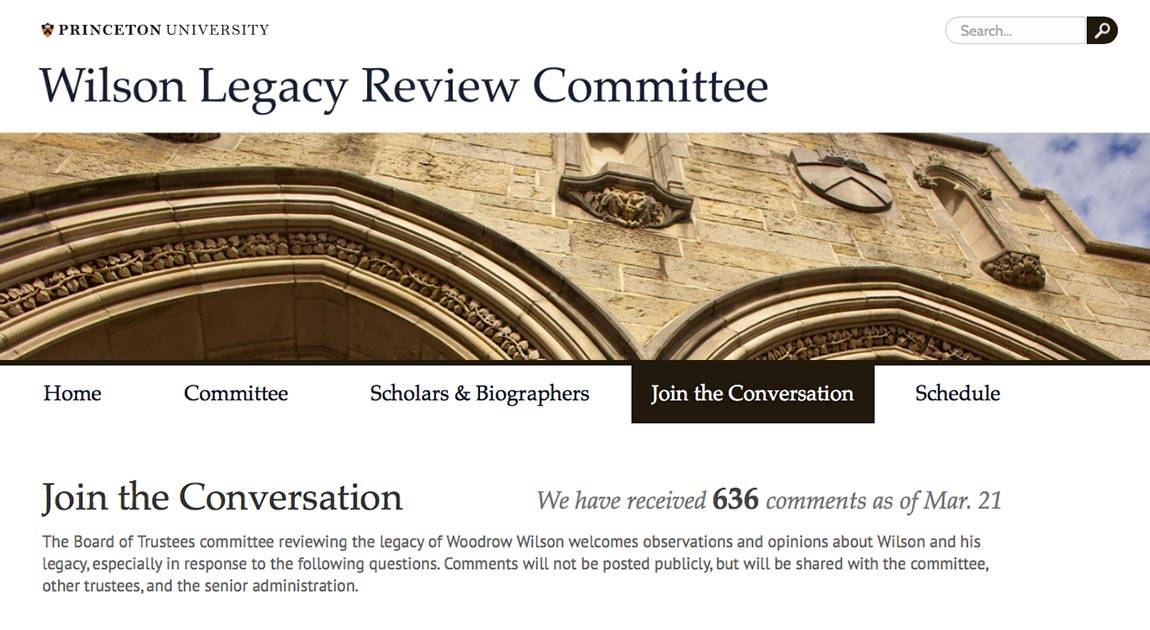 The special Woodrow Wilson legacy committee of the Princeton Board of Trustees received on its website hundreds of submissions on Wilson from undergraduates, graduate students, faculty, staff, alumni and members of the general public. The site also included submissions from nine scholars and biographers of Wilson, who was Princeton's 13th president.

The trustees endorsed the committee's recommendation for additional education and transparency initiatives. The committee called for the University "to acknowledge that Wilson held and acted on racist views" and to "focus renewed attention on those who have helped make Princeton a more diverse and inclusive place."

The committee commended the Woodrow Wilson School for sponsoring an exhibition and panel discussion this spring about Wilson's legacy, and encouraged the installation of a permanent marker at the school to educate the campus community and others about both the positive and negative dimensions of Wilson's legacy.

The committee noted the absence of iconography on campus that speaks to Princeton's aspiration to be diverse and inclusive. The trustees strongly supported the committee's recommendation for a "concerted effort to diversify campus art and iconography" and for consideration of "commissioning artwork that honors those who helped to make Princeton a more diverse and inclusive place, or expresses the University's aspiration to be more diverse, inclusive, and welcoming to all members of the community."

The committee encouraged the administration to develop a process to solicit ideas from the University community "for naming buildings or other spaces not already named for historical figures or donors to recognize individuals who would bring a more diverse presence to the campus." The committee specifically encouraged consideration of naming in this way the atrium in Robertson Hall which serves as the principal entryway into the Woodrow Wilson School.

The committee noted that one of the ways in which Wilson is associated with Princeton is through the University's informal motto, which originated with his sesquicentennial address in 1896 on "Princeton in the nation's service." To reflect Princeton's growing international presence, the motto was updated in 1996 to include the words "and the service of all nations." Upon receiving the Woodrow Wilson Award on Alumni Day in 2014, Supreme Court Justice Sonia Sotomayor suggested revising the motto so it focused less on service to nations and more on service to humanity.

The committee believes the modified motto would better capture "Princeton's mission to serve the public good through teaching, research, and service" and that it would permit the University to recast a plaque on the front campus so that it reflected "both the time-honored aspiration stated by Woodrow Wilson and the forward-looking aspiration stated by Justice Sotomayor.

"The new plaque would contextualize the legacy of Woodrow Wilson; it would allow us to contemporize his expression of Princeton's commitment to service by linking it to our embrace of the coeducational, multi-racial, multi-ethnic, diverse and inclusive composition and ideals of our community today," the committee said.

The trustees accepted the committee's recommendation and authorized the administration to install the new motto on the front campus.