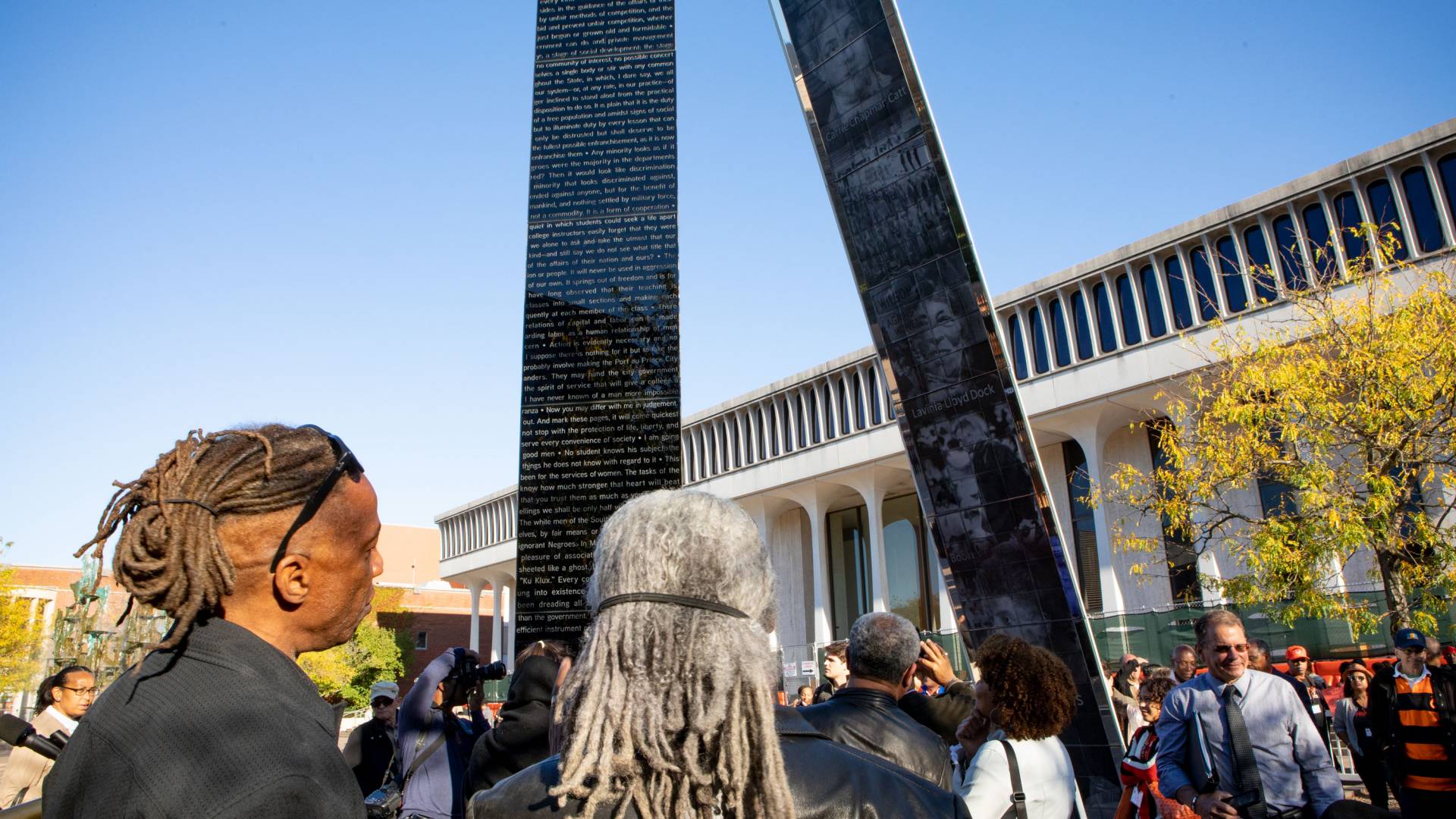 “Double Sights,” a marker addressing the complex legacy of former Princeton University President and U.S. President Woodrow Wilson, was dedicated Oct. 5 at its permanent site on Scudder Plaza, adjacent to Robertson Hall. MacArthur Fellow and Gish Prize winner Walter Hood, left, who conceived the 39-foot-tall sculpture, takes in the first views together with members of the University community present for the event.

Designed by 2019 MacArthur Fellow and Gish Prize winner Walter Hood, the installation is intended as a “stimulus to reflection and an invitation to dialogue,” said University President Christopher L. Eisgruber.

“It is disruptive by design,” Eisgruber said. “‘Double Sights’ exposes the profound contradictions in Wilson’s life and character, and in so doing it challenges us to confront the fault lines in our society and the tensions within the human soul.”

Said Hood, who attended the dedication, “This is our struggle in this country. It’s not just a struggle on Princeton’s campus. … If, as an artist, I can participate in that struggle through the things that I make, then that is my participation.” 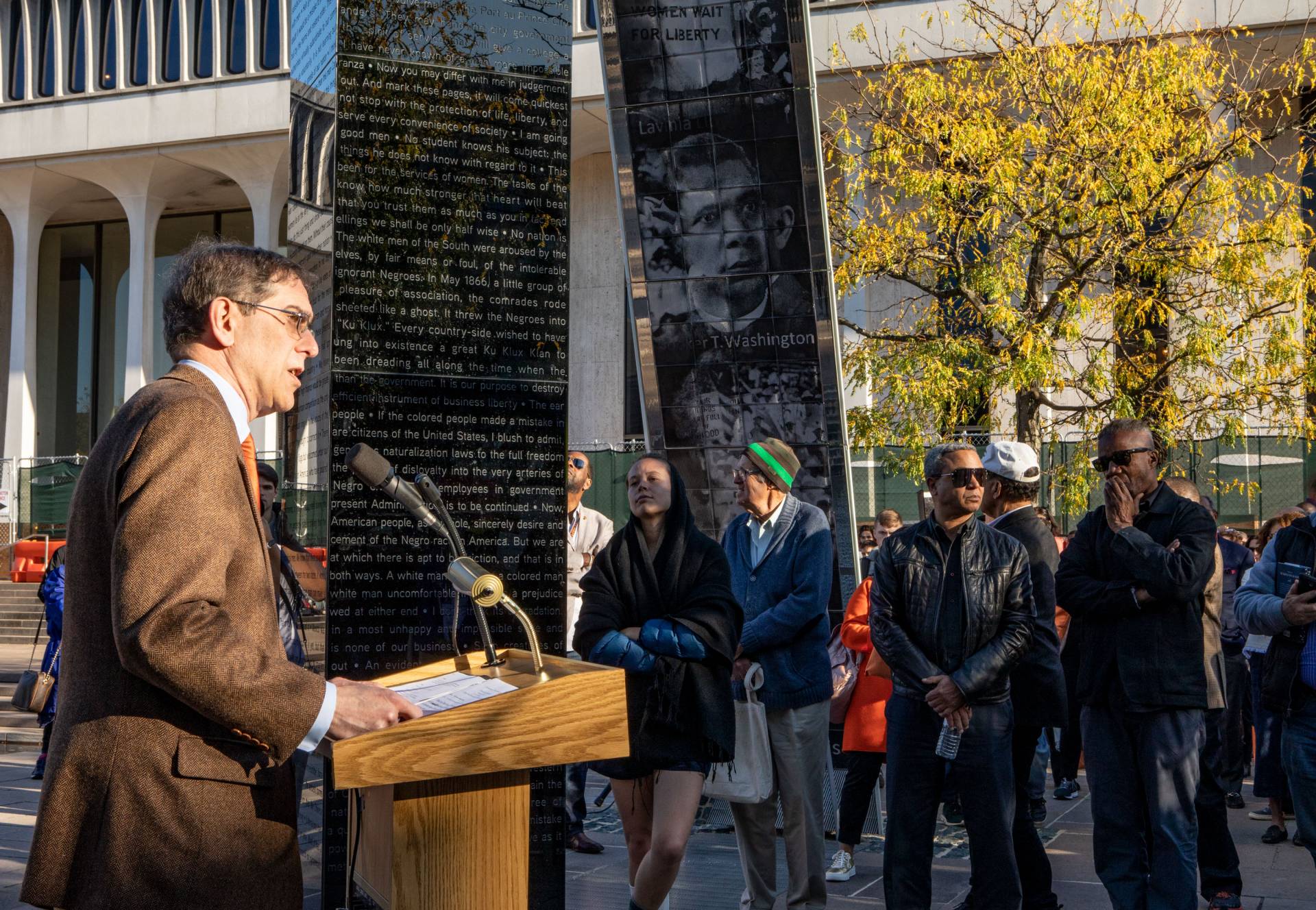 Princeton University President Christopher L. Eisgruber gives remarks at the dedication, calling the installation a “stimulus to reflection and an invitation to dialogue.”

In 2015, a University trustee committee was established to make recommendations about how the University should mark the legacy of Wilson, the University’s 13th president, New Jersey’s 34th governor and the 28th president of the United States. One of the recommendations of the Wilson Legacy Review Committee was that a “permanent marker” be installed at the Woodrow Wilson School that “educates the campus community and others about the positive and negative dimensions of Wilson’s legacy.”

In April 2016, the University’s Board of Trustees adopted the recommendation. A committee was formed, chaired by Woodrow Wilson School Dean Cecilia Rouse and University Architect Ron McCoy and made up of faculty, staff and students. After a competition in which six firms presented options, the committee selected Hood’s project for its reflections on the complexities of Wilson’s legacy and its creative approach.

The dedication coincided with the conference “Thrive: Empowering and Celebrating Princeton’s Black Alumni.” As part of the day’s events, Hood participated in a panel discussion titled “Woodrow Wilson’s Legacy: Wrestling with History.”

The session, held in McCosh 50, was introduced by Brent Henry, Class of 1969, former vice chair of the Board of Trustees who chaired the Wilson Legacy Review Committee. Henry said he was proud and gratified to see the committee’s recommendations coming to fruition.

“I also recognize we have a lot more work to do,” Henry said. “This is really the beginning.” 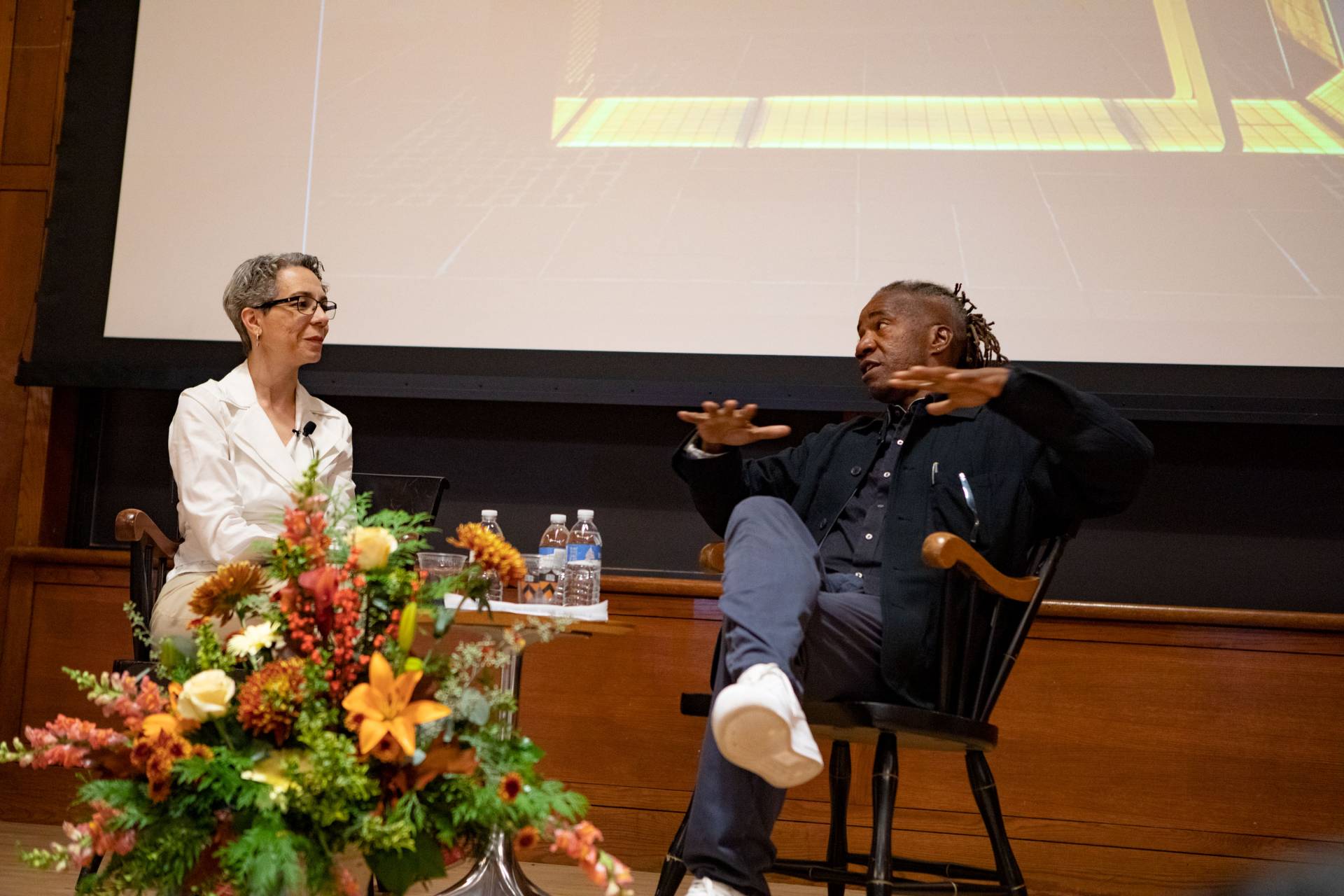 Hood, right, reflects on his artistic process with Michele Minter, Princeton’s vice provost for institutional equity and diversity, prior to the dedication.

Before introducing Hood, Michele Minter, vice provost for institutional equity and diversity, spoke about Princeton’s ongoing efforts to promote a more truthful narrative about its history, through initiatives including historical walking tours, commissioning portraits that more fully represent Princeton’s distinguished alumni and innovators, and naming buildings and public spaces to acknowledge the contributions of the University’s diverse community members.

“We have much more to do broadly to be the kind of diverse, equitable, inclusive place that we want to be, and we have more work to do to acknowledge the truths that we have not fully told about our history and the pain that has caused,” Minter said.

Hood called “Double Sights” one of the most difficult projects of his career and acknowledged the role of student activists in leading to its creation.

Over the past two years, Hood convened focus groups of students, faculty, staff and alumni as well as members of the Campus Iconography Committee to inform his thinking about creating “Double Sights.”

Hood’s design for “Double Sights” consists of two elements: a white column leaning upon a vertical black column, each wrapped with surfaces of stone-like glass and etched with quotations representing both the positive and negative aspects of Wilson’s legacy.

“It’s a spatial piece — it’s not a monument,” Hood said, suggesting it could be seen as an “anti-monument.” 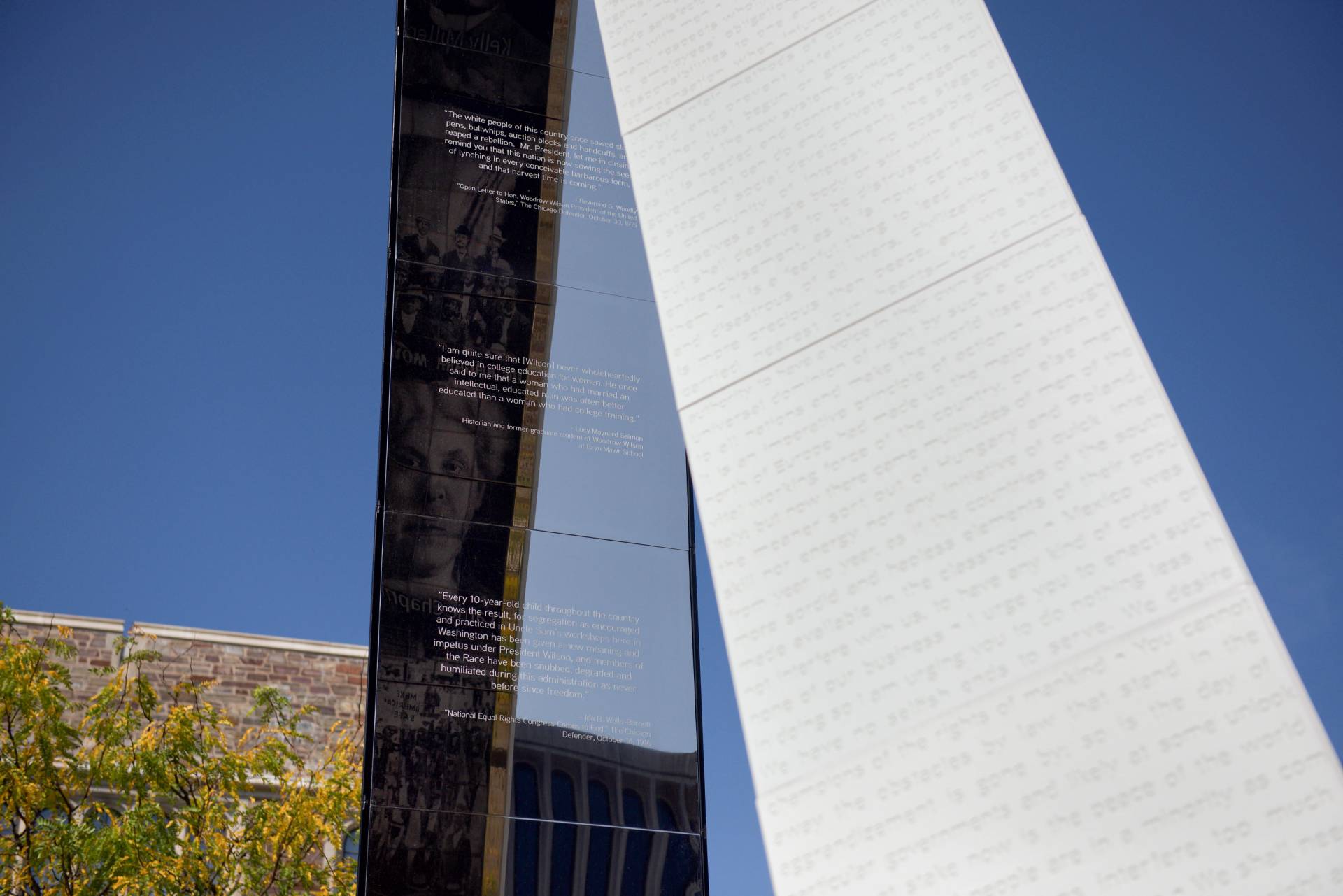 The marker's two columns — a white plane leaning on a vertical black plane — are inscribed on the outside with quotes by Wilson. Inside are the images and words of Wilson’s critics, including civil rights activist W.E.B. Du Bois, journalist Ida B. Wells-Barnett and British statesman David Lloyd George.

Quotes by Wilson on the exteriors of the columns attempt to capture Wilson’s views on a variety of issues.

At the sculpture’s center, the two planes face each other. One is a glass lenticular surface with images of Wilson’s contemporaries — including civil rights activist W.E.B. Du Bois, journalist Ida B. Wells-Barnett and British statesman David Lloyd George — who were critical of his views, particularly about race and gender. The other side contains quotes by these detractors regarding negative actions taken by Wilson.

Hood said he hopes the text will continue to spark deep conversations.

“It’s not a binary — it’s not that easy,” Hood said. “If you read that stuff, you will see it’s very complex.”

Said Minter: "We have to keep talking about Woodrow Wilson forever. And if we ever get comfortable, then we have failed."

Reflecting the continuing debate around Wilson’s legacy, audience members asked questions of Hood and Minter on the decision to create the artwork.

Hood said that he applauded the continued advocacy on campus, and that his work was not intended to solve Princeton’s struggles with these questions.

At the dedication ceremony, some students and alumni protested the installation and encircled it holding signs. They remained on the plaza afterward for a teach-in. As part of the formal program, the University community was invited to a reception in the Bernstein Gallery of Robertson Hall, where the exhibit “In the Nation’s Service? Woodrow Wilson Revisited” is on display.

The exhibit, which critically examines Wilson’s legacy and has traveled around campus since its inception, is permanently available online.

In his remarks, Eisgruber said “Double Sights” will “prompt us to reflect upon our past and encourage us to do better in the future.

“In so doing, it will respond — at once figuratively, ingeniously and very literally — to the trustee committee’s request for a ‘multifaceted understanding and representation of Wilson,’” he said. “It will also advance this University’s fundamental mission to seek truth about even the most difficult and sensitive topics, and to agitate and re-ask forever the profound questions of history and justice about which we must never rest content and for which, as with Walter Hood’s spectacular artwork, no single perspective is ever adequate.”