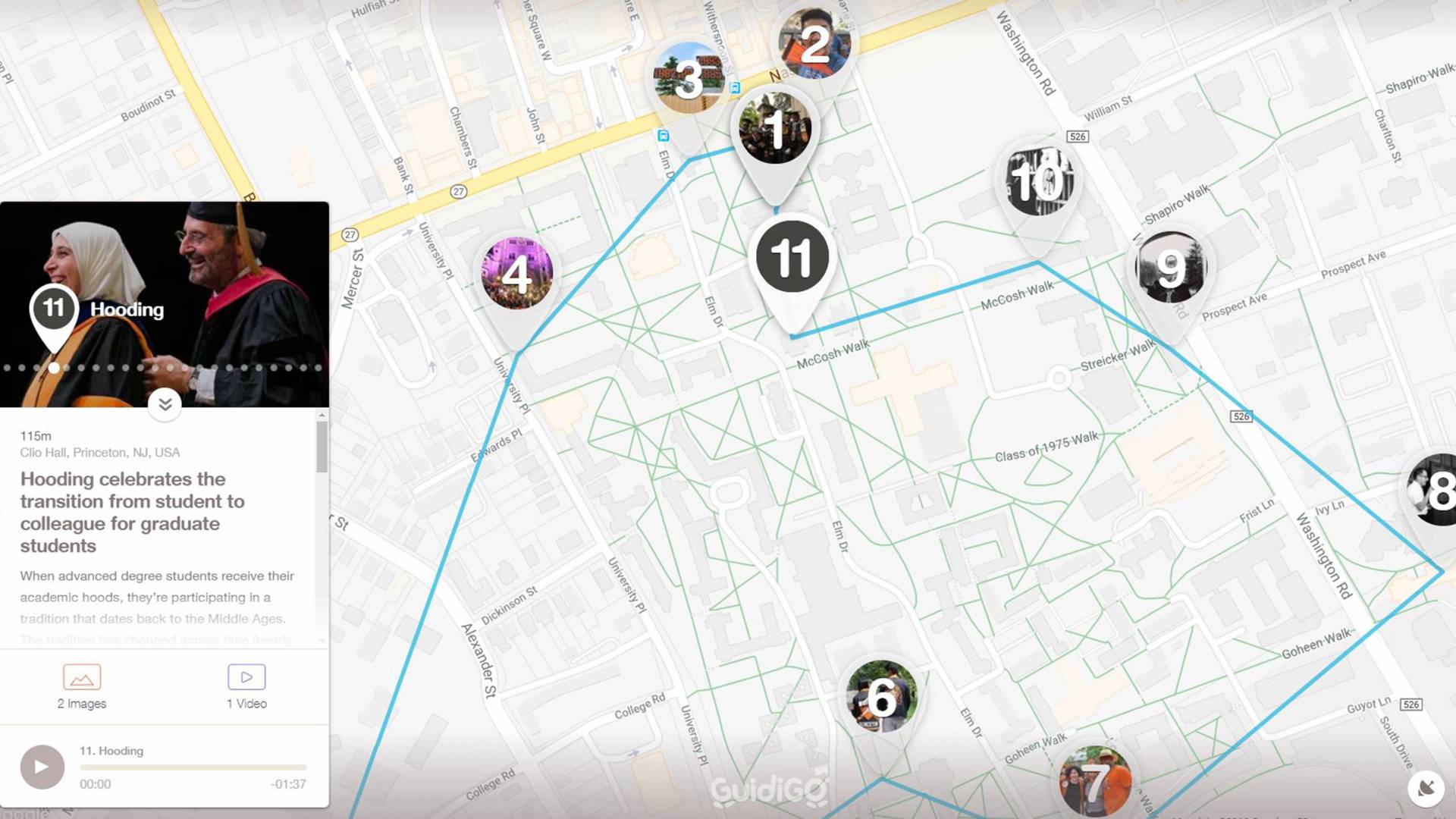 Four new campus walking tours will help tell a more complete narrative of the University’s past and present. The online, mobile friendly tours highlight stories of African American Life at Princeton, “Firsts” at Princeton, Traditions at Princeton (as seen in the above screenshot) and Women at Princeton.

Screenshot courtesy of the Office of the Executive Vice President

Princeton has launched four new walking tours to help tell a more complete narrative of the University’s past and present.

The tours are web-based and mobile friendly, making them easy to follow while walking around campus. They also may be accessed remotely using Firefox or Google Chrome browsers for people who are not on campus.

Tour followers will find colored stickers marking tour stops around campus. The stickers provide a scannable code and link so users can access the interpretive text, images, audio and video that help explain the significance of the sites, events and people discussed at each stop. The code is activated using the camera on a smartphone (an app is not required to scan the tour codes).

By elevating Princeton’s less well-known stories, the tours aim to narrate, demonstrate and reflect on the nuanced history of Princeton, and are part of broader efforts overseen by the Campus Iconography Committee (CIC) to update and diversify campus art and iconography.

The CIC is co-chaired by Executive Vice President Treby Williams and Carolyn Rouse, professor and chair of the Department of Anthropology.

“We are very excited to launch this series of walking tours as part of Princeton’s broader effort to share some of the University’s lesser-known histories, while promoting dialogue and reflection in the process,” Williams said. “We hope this initiative will invite those on our campus and beyond to participate in understanding the stories that over time have led to the vibrant and diverse community we enjoy today.”

In addition, the University will dedicate two campus spaces this fall in honor of freed slaves who served the Princeton community. The easternmost arch of East Pyne Hall has been named for James Collins “Jimmy” Johnson, who worked on campus for more than 60 years until his death in 1902. A new garden in front of Firestone Library has been named for Betsey Stockton, who lived in Princeton in the mid-1800s and helped found a public school for African American children and the Witherspoon Street Presbyterian Church, after gaining her freedom from the household of University President Ashbel Green.

Other CIC initiatives include a photo exhibit on the life of Johnson in Frist Campus Center and the photography exhibit “HYPHEN” in Chancellor Green showcasing the work and lives of students. Both exhibits are free and open to the public.  The CIC also oversees the ongoing process to expand the University’s portrait collection to better reflect Princeton’s diverse community. 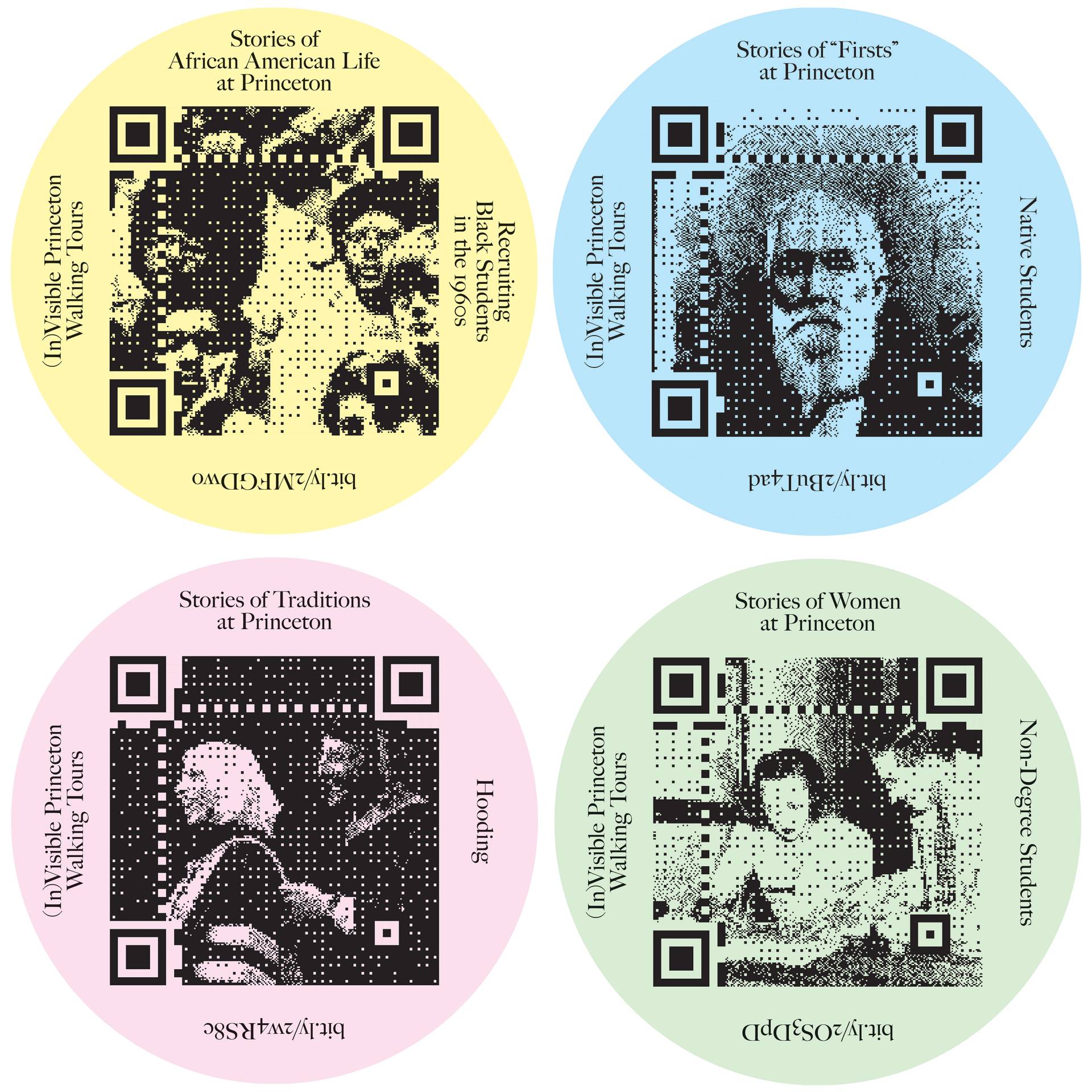 Tour followers will find colored stickers marking tour stops around campus. The stickers provide a scannable code and link so users can access the interpretive text, images, audio and video that help explain the significance of the sites, events and people discussed at each stop.

Image courtesy of the Office of the Executive Vice President

Highlights from the new walking tours

The four new walking tours aim to highlight compelling stories and important facts about different aspects of University life. They also seek to reincorporate once marginalized voices into the University’s historical narrative.

The African American Life at Princeton tour begins by addressing slavery at the University and ends with diversity and inclusion initiatives in the 21st century.

The “Firsts” at Princeton tour investigates the ways that different cultural and identity groups are represented among the campus community, now and in the past.

The Traditions at Princeton tour provides incoming students and other visitors with an introduction to student life as Princetonians. It covers some of the traditions most important to current undergraduate and graduate students, and also discusses how these traditions have changed over time.

The Women at Princeton tour explores the history of women affiliated with the University, from the enslaved women owned by faculty and administrators in the 1700s to the administrators, faculty, staff and students of today.

Tour followers will learn about the many ways women have shaped Princeton’s history, including the wives of University presidents, women who worked on staff as early as the 1870s, the women who enrolled as non-degree students starting in World War II through co-education in 1969, the first female faculty, and the first female president, Shirley M. Tilghman.

The subjects of some of the stops are relevant to multiple tours, highlighting how identities intersect to shape Princeton and its history. For example, the story of black graduate students in the 1890s is important both in the timeline of an African American presence on campus and the context of the University’s increasing commitment to diversity.