Princeton University will name a campus roadway for pioneering African American alumnus and longtime Princeton resident Robert J. Rivers Jr. He was among the first black undergraduates — as well as one of the first black students from the town of Princeton — admitted to the University. 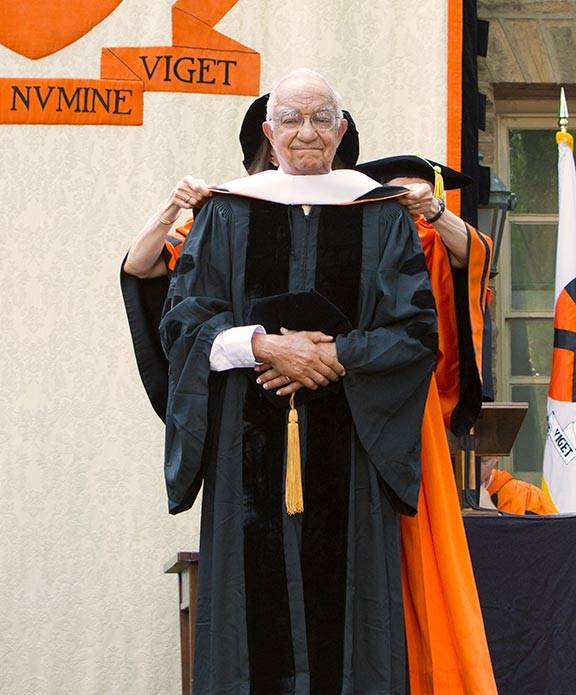 Robert J. Rivers, a Princeton Class of 1953 graduate, receives an honorary degree in 2016. The University also will honor Rivers, who was among the first black undergraduates to attend Princeton, with a new University portrait and by naming a campus roadway after him.

Rivers, a distinguished surgeon who graduated in 1953, was also the first African American elected by the Board of Trustees to serve as a Princeton trustee. The roadway that enters campus from Nassau Street between Firestone Library and the buildings of the Andlinger Center for the Humanities will be named Rivers Way in his honor.

The name Rivers Way was recommended by the CPUC Committee on Naming and approved by the Board of Trustees.

“We are pleased to submit this recommendation and in doing so we further suggest that the roadway be referred to as ‘Rivers Way,’ with the intentional double meaning that this is a way into the campus named for Bob Rivers, but also that we encourage all who enter our campus to emulate Bob Rivers, and to live their lives ‘River’s way,’” the Naming Committee wrote in its recommendation. The committee is chaired by Angela Creager, the Thomas M. Siebel Professor in the History of Science and professor of history.

President Christopher L. Eisgruber has noted that while the roadway is “of modest length, this entrance to the campus is prominently located and it would be advantageous for us to be able to cite it on our maps by name. The signage for the site would be visible from Nassau Street, and the roadway itself is frequently traversed by members of the campus community, town residents and visitors.”

Rivers is a retired professor of clinical surgery and associate dean for minority affairs at the University of Rochester School of Medicine and Dentistry. His family has deep ties to the town of Princeton and the University. His grandfather planted the first elms along Washington Road. His father worked for 43 years at the Tiger Inn eating club and as a dormitory janitor. His mother cared for a professor’s family. His brother coached several Princeton University baseball and football teams, and his three sons are Princeton graduates.

After earning a degree in biology from Princeton, Rivers attended Harvard Medical School, served in the Navy, and then joined the University of Rochester School of Medicine and Dentistry as a vascular surgeon. Today, he lives in Princeton in the same house in which he lived as a child.

Rivers is among 10 individuals who also will be honored in new University portraits to better reflect the diversity of alumni, former faculty and former administrators. He received an honorary degree from Princeton in 2016.

“[Rivers] is a true Princeton pioneer,” his honorary citation read. “A distinguished surgeon and a mentor and role model for generations of students and alumni, he paved the way toward a University increasingly committed to diversity and inclusion, and he did it with dignity, grace, integrity and a lifelong devotion to this University’s highest values.”