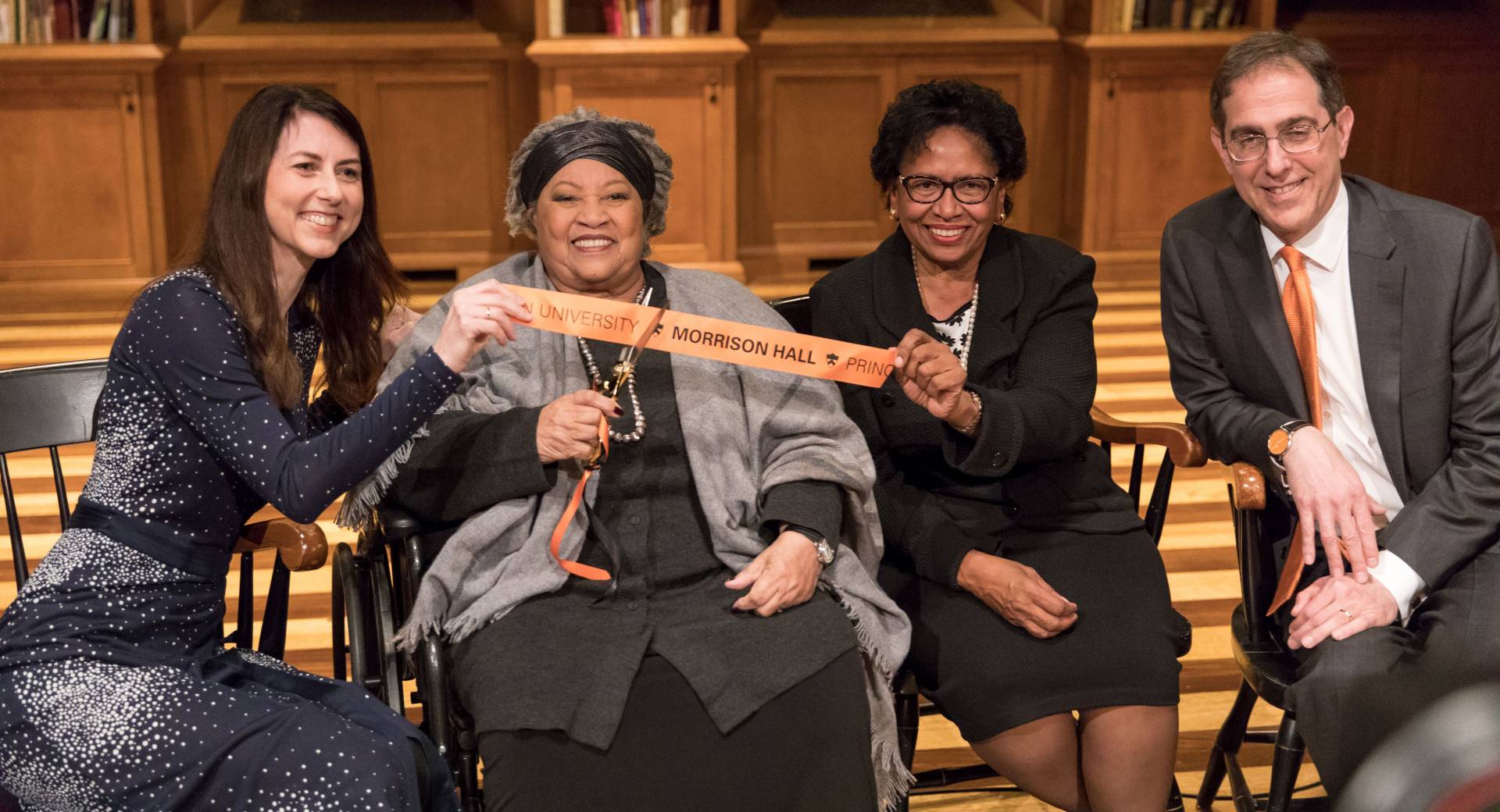 Princeton dedicated the naming of Morrison Hall on Friday, Nov. 17, in Chancellor Green, in honor of Nobel laureate Toni Morrison, the Robert F. Goheen Professor in the Humanities, Emeritus. Shown from left are the speakers at the ceremony, MacKenzie Bezos, Class of 1992, who studied with Morrison; Morrison; Ruth Simmons, president of Prairie View A&M University who helped recruit Morrison to Princeton; and Princeton President Christopher L. Eisgruber.

Princeton University dedicated the naming of Morrison Hall on Friday, Nov. 17, in honor of Toni Morrison, the Robert F. Goheen Professor in the Humanities, Emeritus, and the recipient of the 1993 Nobel Prize in Literature. Morrison was the first African American to be awarded the prize.

The dedication was held in Chancellor Green following Morrison's keynote address at the Princeton and Slavery Project Symposium in Richardson Auditorium.

Princeton President Christopher L. Eisgruber opened the ceremony, noting that Morrison Hall is a "181-year-old building that is the home and the heart of the undergraduate college at Princeton University." 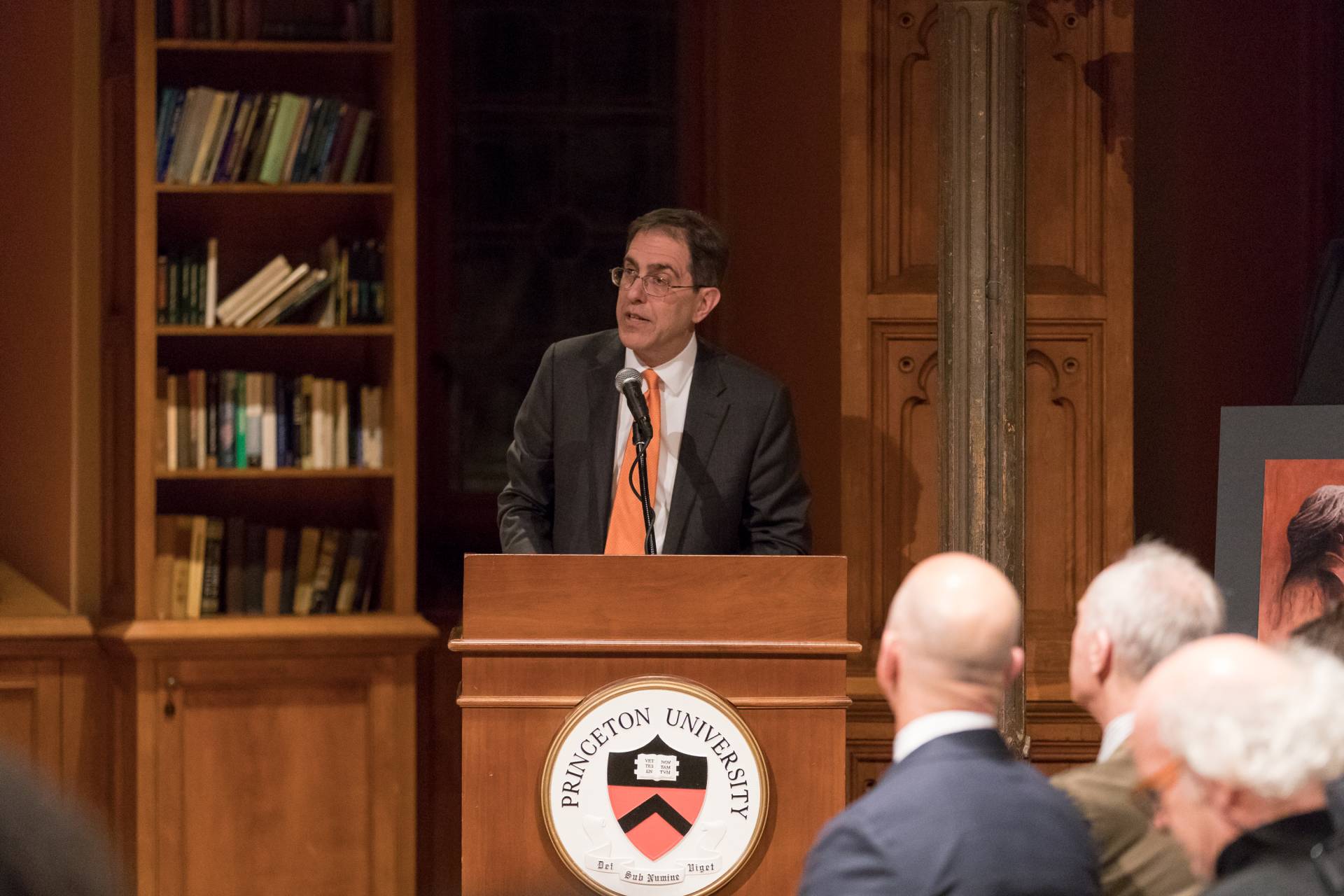 Eisgruber opens the ceremony, noting that “Today Princeton revises itself — revises its plaques of stone and its maps both paper and electronic — so that Toni Morrison’s name becomes part of the lexicon through which students, faculty, staff and alumni navigate this campus, and thereby part of the evolving tapestry through which our community defines itself.”

Speaking at the dedication with Eisgruber and Morrison were Ruth Simmons, the president of Prairie View A&M University and a close friend of Morrison's, and the author MacKenzie Bezos, a former student of Morrison and a member of Princeton's Class of 1992.

"This is a very, very special, beautiful occasion for me," Morrison said.

Morrison Hall formerly was called West College. The building houses the Office of the Dean of the College and faces Cannon Green behind Nassau Hall. On Nov. 14, a portrait of Morrison by Paul Wyse was hung in the building.

Last year, the trustees approved a recommendation to name one of the University's most prominent buildings for Morrison, after the Council of the Princeton University (CPUC) Committee on Naming sought suggestions throughout the University community on the naming of "buildings or other spaces not already named for historical figures or donors to recognize individuals who would bring a more diverse presence to the campus."

"How fitting that the first building named through this process will now honor a teacher, an artist and a scholar who not only has graced our campus with the highest imaginable levels of achievement and distinction, but who has herself spoken eloquently about the significance of names on the Princeton campus," Eisgruber said, referring to an address Morrison delivered in 1996 at Princeton's 250th convocation, titled "The Place of the Idea; the Idea of the Place."

Added Eisgruber: "Today Princeton revises itself — revises its plaques of stone and its maps both paper and electronic — so that Toni Morrison's name becomes part of the lexicon through which students, faculty, staff and alumni navigate this campus, and thereby part of the evolving tapestry through which our community defines itself." 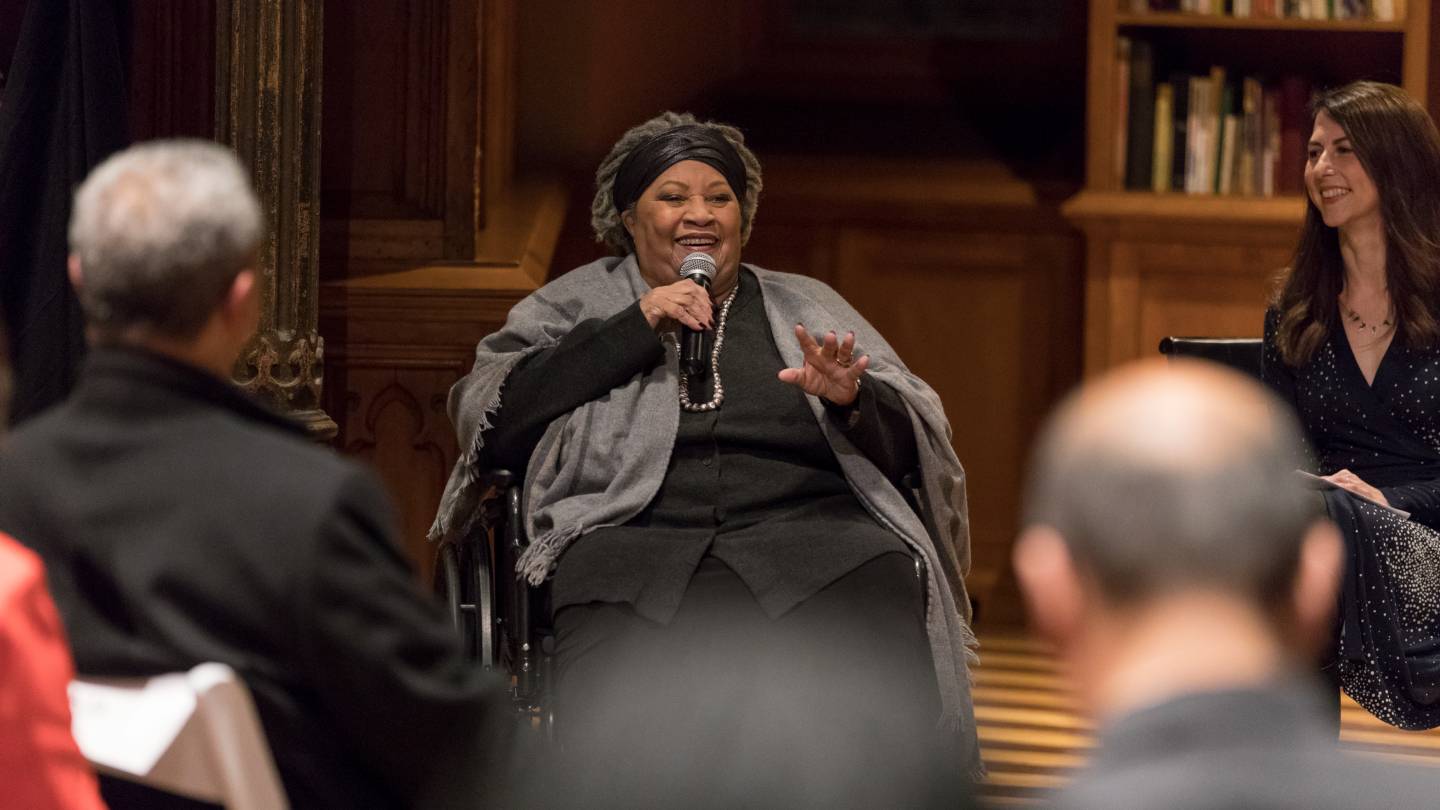 Morrison, who transferred to emeritus status in 2006, came to Princeton in 1989 to teach literature and creative writing. Morrison played a key role in expanding the University's commitments to the creative and performing arts and to African American studies. In 1994, she founded the Princeton Atelier, which brings together undergraduate students in interdisciplinary collaborations with acclaimed artists. In 2016, the Princeton University Library announced that the major portion of Morrison's papers, which had been part of the permanent library collections since 2014, were open for research to students, faculty and scholars worldwide.

"By honoring Toni Morrison in this way, we recognize the indelible impact she has had on this University," Eisgruber said, emphasizing that Morrison's "leadership has helped Princeton to become the increasingly imaginative and inclusive institution that we know today."

In her remarks, Simmons, who helped recruit Morrison to Princeton when Simmons was acting director of the Center for African American Studies, quipped, "It doesn't take much for Toni to get a swelled head; this is going to take it over the top." 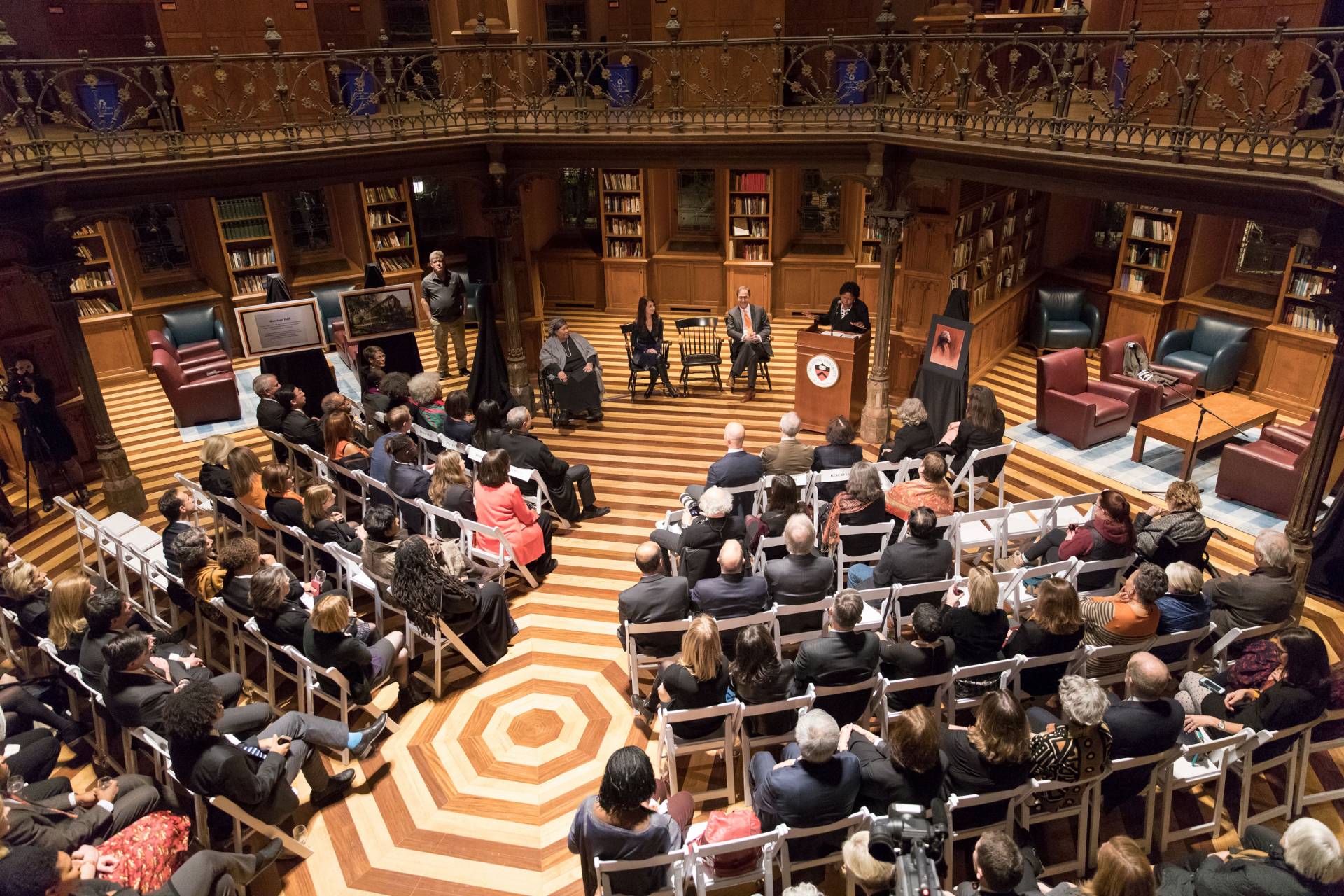 Simmons, who has a long friendship with Morrison, speaks of the entwined story of a great writer and a great university.

Simmons recalled "the first experience Toni had of Princeton, and the first experience Princeton had of Toni," when Morrison arrived on campus to give a reading during a record snowstorm. Even though classes and events were cancelled, Simmons said "nothing" deterred those wanting to hear this "magnificent voice."

Simmons said that snowy night and the dedication of Morrison Hall "bookend" Morrison's connection to Princeton. Said Simmons, "This evening for me places a wonderful exclamation point on a now storied relationship that enters the history of Princeton, forever to be entwined — the story of a great writer and a great university with the good sense to turn toward the future will be recounted through the ages, advancing the legacy of both in a powerful way."

Bezos, who majored in English and earned a certificate in creative writing, said she came to Princeton with a secret hope of "taking even one class with Toni Morrison."

She said that while she felt fortunate to get into Princeton as well as the creative writing program, what was most "lucky" was the discovery that "this writer that I admired so much also turned out to be such a gifted and devoted teacher." 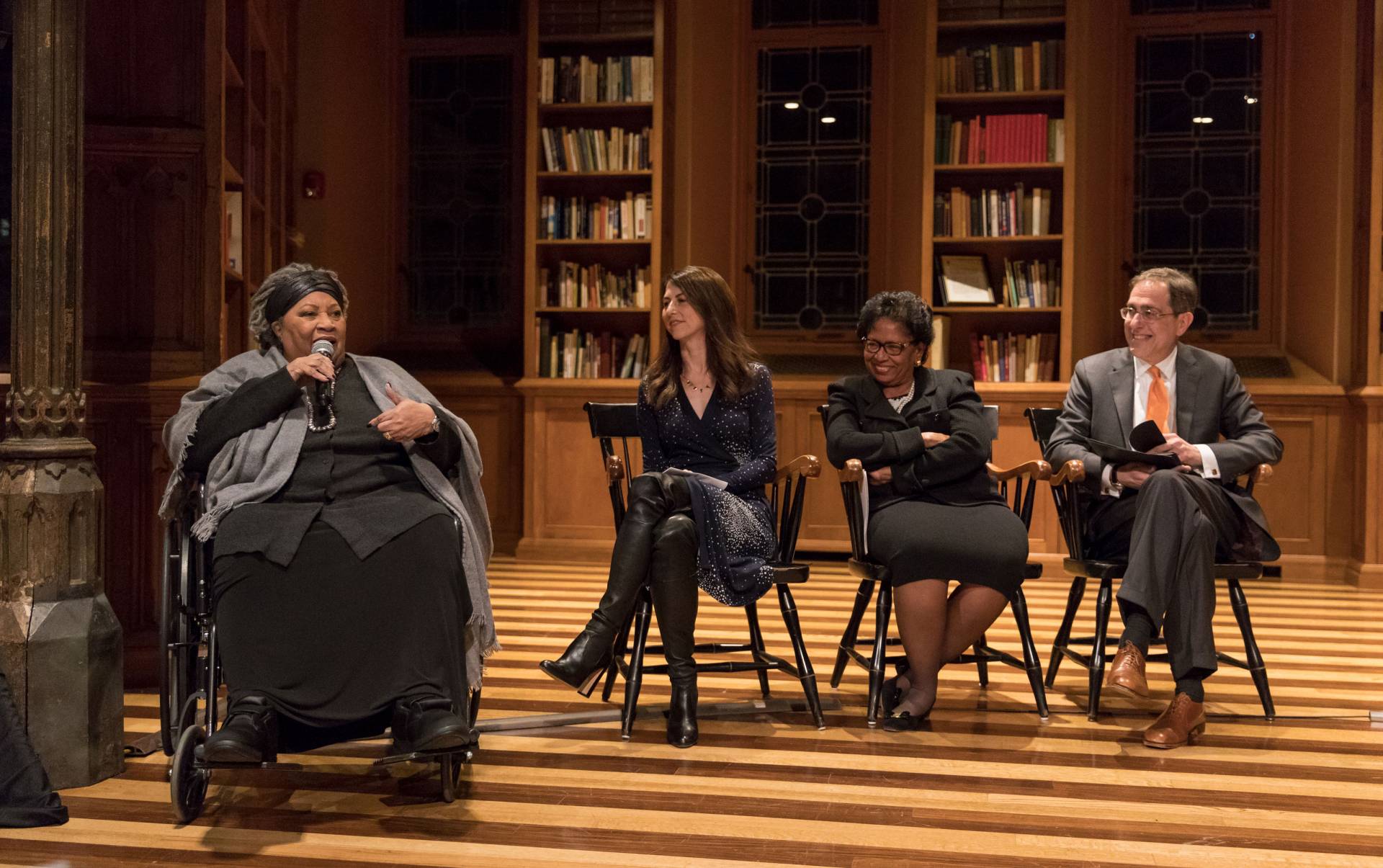 In her remarks, Morrison gives a lively telling of how she learned she had won the Nobel Prize in 1993.

Bezos arrived at Princeton just after Morrison had won the Pulitzer Prize for "Beloved" in 1988. "This woman was busy — there were a lot of demands on her time," Bezos said. "I honestly expected to be on my own to nurture my own interest in writing with whatever she had left to give me."

The opposite turned out to be true. Bezos recalled the keen observations and close attention Morrison gave her students, including when Morrison worked with her as her senior thesis adviser, "turning pages one by one."

"This teaching thing was a true second passion," Bezos said. "She has given me a real example of a life of passionate devotion to more than one calling." 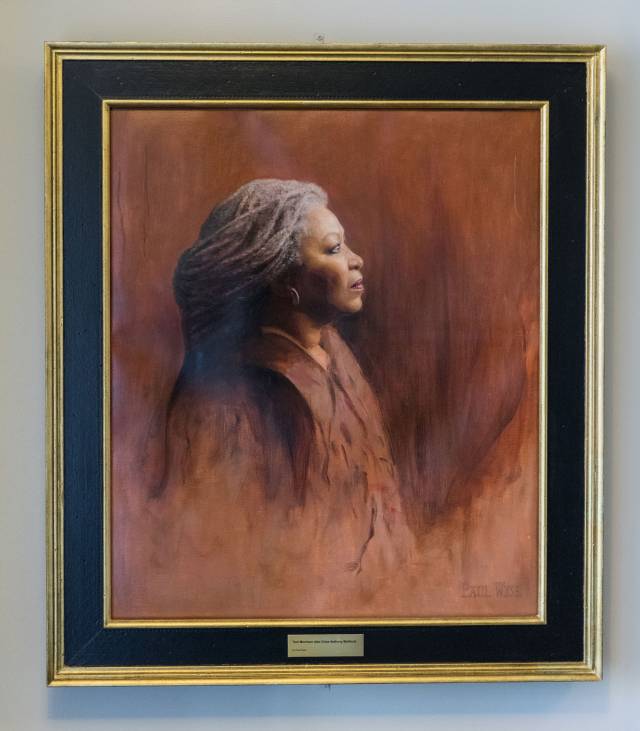 A portrait of Morrison by Paul Wyse hangs in Morrison Hall, which was named in her honor two years ago.

In thanking Simmons and Bezos for their remarks, Morrison offered "short observations" about the two women.

She agreed that Simmons was the reason she came to Princeton. Simmons was, also, "the first person to tell me I had won the Nobel Prize," Morrison said.

She said Simmons called her with the news about the prize from a TV report, and she "hung up," wondering, "Why would she know something about me I didn’t know?"

"Well, it is Ruth, and she never misleads," Morrison reflected at the time, walking out of her house to go and teach, noticing some people there. She said: "At noon the phone rang and it was the Nobel Prize committee in Sweden. Then I said, could you fax me that? Indeed, he did send me a fax, which I could then verify."

Morrison recalled MacKenzie Tuttle, as she knew her as a Princeton student, as an "extraordinary writer, almost full-blown."

"I had spent a lot of time as an editor," Morrison said, saying that the years editing other people's work was what she "could bring to someone like MacKenzie," whose subsequent two books she read.

Said Morrison, "I'm so glad you were both willing to come to tell me how wonderful I was."

After the remarks, the speakers joined for a ribbon-cutting at the front of the room. "That concludes our ceremony, and Morrison Hall is officially Morrison Hall!" Eisgruber said to the applauding audience. 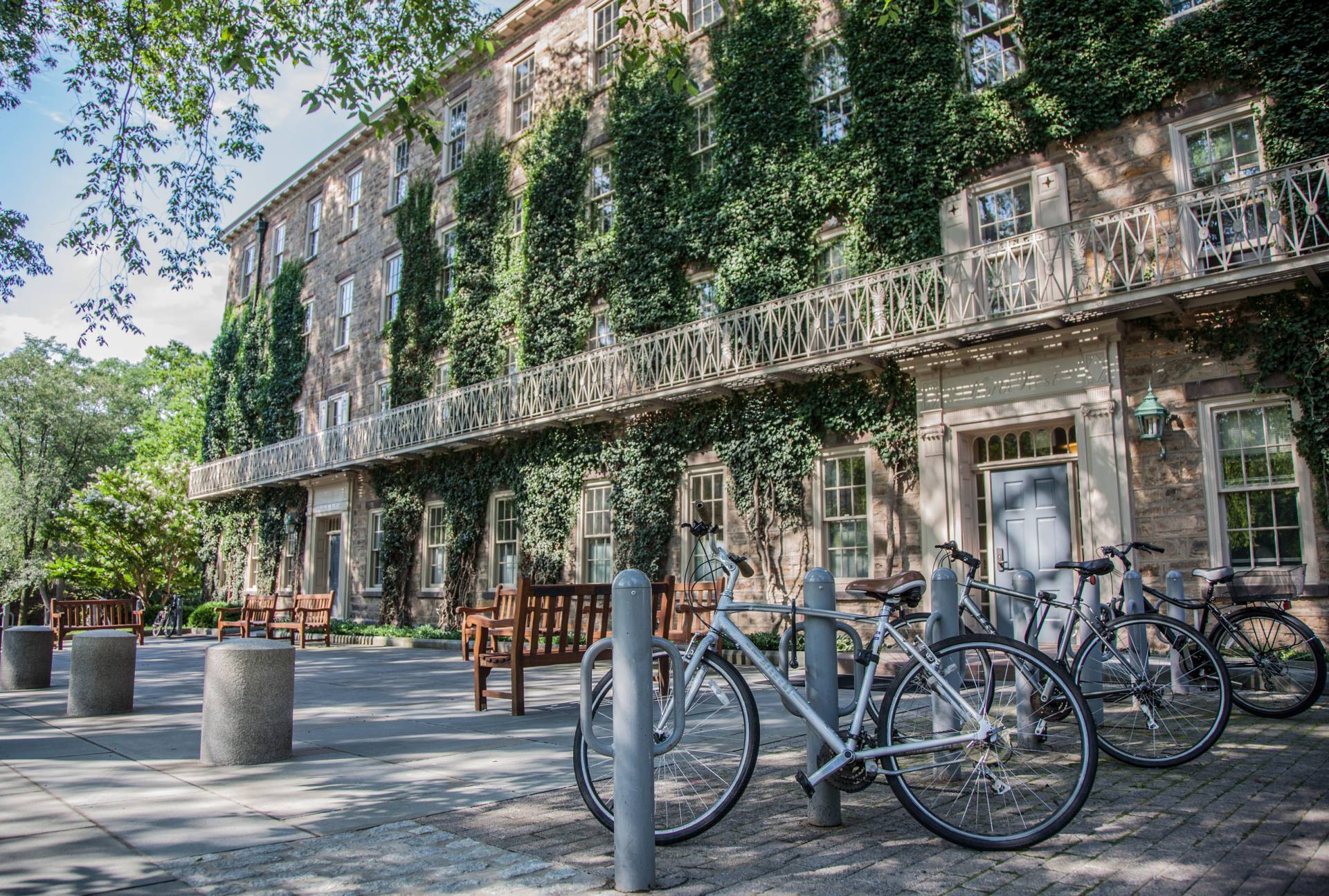