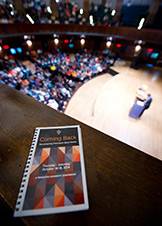 The "Coming Back: Reconnecting Princeton's Black Alumni" conference, held Oct. 16-18, offered Princeton University's black alumni the opportunity to return to campus to participate in intellectual and social offerings. More than 750 undergraduate and graduate alumni and guests attended the conference — representing classes from 1962 to 2014, coming from more than 30 states and at least six other nations. Above, alumni learn about new developments on campus — from construction to diversity initiatives — during a conversation in Richardson Auditorium with President Christopher L. Eisgruber.

More than 750 alumni and guests attended the conference held Thursday through Saturday, Oct. 16-18, representing classes from 1962 to 2014 as well as 42 academic departments and programs. Undergraduate and graduate alumni came from more than 30 states and at least six other nations. The conference was organized by the Office of the Alumni Association.

Narrating the story of African Americans at Princeton

In his welcoming remarks Friday in Richardson Auditorium, Eisgruber, a 1983 alumnus, greeted a large crowd, many bedecked in Princeton's signature orange. He lauded the myriad accomplishments of black alumni and the many ways their contributions "preserve, narrate and exemplify the story of African Americans at Princeton and the nature of this community on this campus."

Eisgruber updated participants on what has been happening on campus since the last "Coming Back" conference, ranging from construction projects to diversity initiatives. 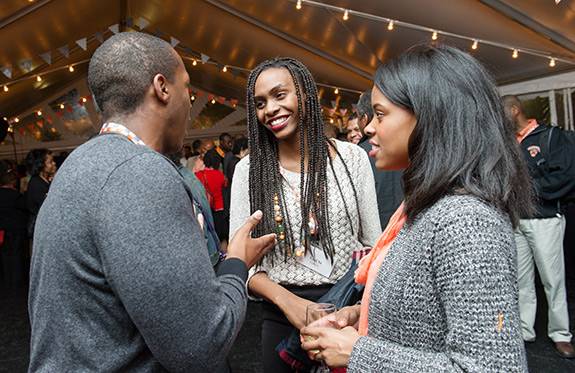 The conference included a full schedule of events such as social gatherings, panel discussions and networking occasions hosted by academic departments and affinity groups.

Noting that 43 percent of the members of the Class of 2018 are from racial and cultural minorities — a statistic greeted with warm applause — Eisgruber remarked: "On the one hand I'm proud of where the University has been going since the last ['Coming Back'] conference, but I know we have a lot of work left to do."

Alumni reconnect with classmates and friends at a decorated tent lighting up the campus at night.

Questions posed to Eisgruber ranged from how the University is reaching students from low socioeconomic backgrounds with the message of its no-loan financial aid policy, to Princeton's commitment to working with minority contractors, architects and construction firms, to how Princeton is supporting first-generation students.

The program included the screening of a video produced for the conference by Melvin McCray, a 1974 alumnus, which showcased several black alumni whose lives and professions incorporate service to others, a reflection of Princeton's informal motto: "In the nation's service and in the service of all nations." 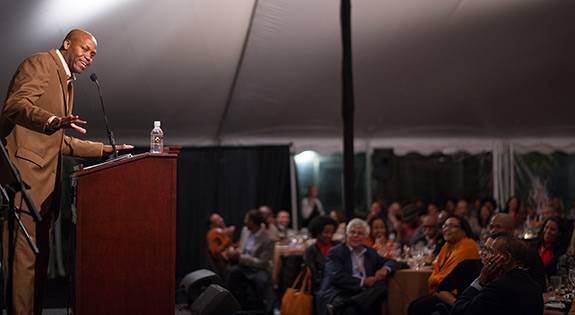 Craig Robinson, a 1983 alumnus and ESPN college basketball analyst, enjoys a warm reception after his address at one of the conference dinners.

Jeremy White, a 1996 alumnus and management consultant in the Washington, D.C. area, said he was impressed both with Eisgruber's "commitment to engaging African American alumni and with the work that had been done since the last time I was here."

Sekazi Mtingwa of Hillsborough, North Carolina, a retired professor from the Massachusetts Institute of Technology who earned his Ph.D. in physics from Princeton in 1976, said what resonated most for him was the University's financial aid policy. "If a student gets financial aid, none of it has to be a loan. I was thrilled that in fact Princeton still follows that, while some universities have stopped," Mtingwa said.

Many conference participants said they came in particular for the Toni Morrison event on Friday afternoon, which reflected on her legacy at Princeton.

Obianuju Obioha of Potomac, Maryland, a 2014 alumna who is applying to medical school, attended the author's reading of "Home" on campus in 2012 and was eager to see Morrison again. "I remember reading her in high school and to see her in real life was so inspiring, emotional and enthralling," Obioha said.

What Obioha — and the rest of the audience at Richardson Auditorium — didn't know was that Eisgruber would make a surprise announcement: Morrison's papers are now a permanent part of the University's library collections. 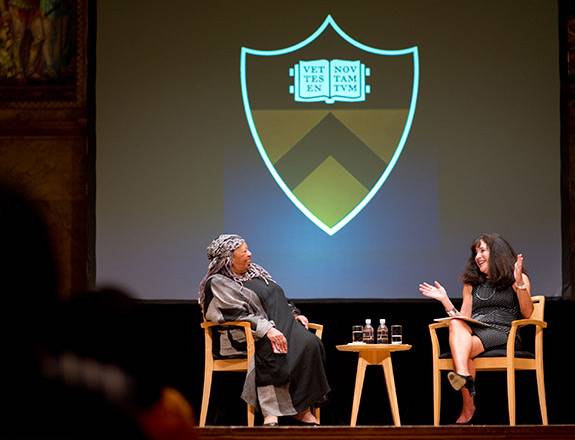 At one of the most anticipated events of the conference, Nobel laureate Toni Morrison, the Robert F. Goheen Professor in the Humanities Emeritus (left), participates in a conversation with Claudia Brodsky, professor of comparative literature.

"The Morrison Papers will be a jewel of our library's manuscripts collection," Eisgruber said.

The announcement included a screening of a video tribute, produced and directed by documentary filmmaker Louis Massiah. In 1997, Massiah led a Princeton Atelier, a program founded by Morrison to bring renowned artists from a wide range of disciplines to the University to collaborate with students in intensive semester-long courses to produce original work.

Ruth Simmons, a member of Princeton's board of trustees and president emerita of Brown University, was instrumental in bringing Morrison to Princeton in 1989. Simmons recalled the day Morrison arrived at Princeton for a reading — in the middle of a snowstorm. Simmons' worry about attendance was unwarranted: McCosh 10, a large, auditorium-style classroom, was filled to capacity. "They knew that [Morrison's] unique voice — raw, poignant, relevant — was quite simply that of a literary genius."

Morrison's commanding yet gentle presence created an intimacy in Richardson Auditorium as she took the stage with Claudia Brodsky, professor of comparative literature. Their conversation examined many of the themes that illuminate Morrison's novels — "Song of Solomon," "The Bluest Eye," "Beloved," "Home" — including the author's fascination with goodness, which Morrison called "mystical and complicated." 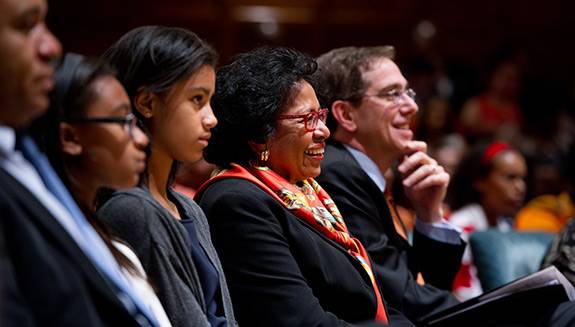 "You've been courageous enough to give goodness words that may themselves be misunderstood in their fearlessness," Brodsky said.

"There was always somebody who gave up something dear in order to make it alright for somebody else," Morrison said of the characters in her novels.

Receiving a thunderous standing ovation at the end, Morrison said, "I regard my time at Princeton … [as] absolutely the best time I have spent in my adult life."

The "Coming Back" website features more information and photos of the conference; videos of sessions will be posted in the coming weeks.