Award-winning poet Brenda Shaughnessy assigns introductory students poems dealing with love, grief and heartbreak to inspire them to take bold, emotional risks in their own work. "I want students to know that their own experience is valid and useful in poetry," she said. "This helps them understand that their own strong feelings are great material, ideal stuff to use in their writing."

In recognition of National Poetry Month, the University home page features stories from the April 6 Princeton Weekly Bulletin on two faculty members who represent some of the many creative approaches to the study of poetry at Princeton: Brenda Shaughnessy, an award-winning poet who asks young writers to tap into their strongest convictions; and Susan Wolfson, a scholar of British literature who urges students to closely read every word when studying poetry.

"Every writer, whether he's the greatest living American poet or a total novice, has to start with a blank page," said Shaughnessy, a lecturer in creative writing in the Lewis Center for the Arts. "You have your experiences, your reading, your passion, your intelligence and things you know about the craft, but in terms of getting all that on the page, you still have to start where everybody else starts — with nada, with nothing."

That blank page is both daunting and thrilling, said Shaughnessy, an award-winning poet who came to Princeton in 2007. She teaches Princeton students to tackle the empty page by showing them how veteran poets transform deep emotion and sometimes strange ideas into poetry and then asking her students to risk uncertainty, trust intuition and take leaps, she said.

For her "Introduction to Poetry" class, Shaughnessy likes to assign love poems.

"Love poetry helps young poets understand, 'I can write about the feelings closest to me, with intimate subjectivity,'" she said. "I want students to know that their own experience is valid and useful in poetry. This helps them understand that their own strong feelings are great material, ideal stuff to use in their writing."

Shaughnessy gives students love poems by Pablo Neruda and e.e. cummings, as well as works that address difficult emotional states such as grief and heartbreak. She hopes that reading poetry on those themes will get her students to "cut loose on the page, risk something big," she said. "I try to remind them that this is their voice, this is their shot. Are they going to take a stand? Are they going to say something powerfully?"

In her own poetry, Shaughnessy writes about love, loss and rejection with tenderness, wit and emotional precision.

"Brenda Shaughnessy's work is jaunty, jestful, jiggy, joyous, juicy — and I've not gone beyond adjectives beginning with the letter 'J,'" said Paul Muldoon, the Pulitzer Prize-winning poet who is the chair of the Lewis Center and a professor of creative writing.

I could be an eel in whirled stillwaters,the semiotic blue of trick quicksand,meaningless and true.In my room, ordinary yellow objectslike lapel labels and platessmile like similes,caressed like air in movies, the texture of froth. I need sugar. Need it like a right, so sugar is given. A river of high minutes rising to a horizon,only ever seeing my double eyes.I’m so really truly enough that I should save myself for later.Later, don’t come now.Don’t turn me back into that seventhgrader in a human ring around the gym,certain I’m not in the circle.Now I’m slinging room-darknessto sun. Swelling hipsincredibly undone,my blind blood singing,“qua aqua aqua,”intoxicatedwith this song’s cologne, a silk ribbon of paint driven through nature.Fun, who knew? Spinningwith nothing, like earth does,I flew more than I could lose.Oh god of ether, god of vapor,I could use one of either of you.Take me like a swan would.Take me, wing me up and make me dance, impaled on a hooked prick of cyclone. Sightless. Wind my limbs, digitsclutching feathers, around you,and disappear.I won’t fall. I know how to do it now. I broke the window with god’s ball. I am smoothly usedand honeyed, self-twinned, fearless, a wineskin emptying into a singing stranger. © 2008 Brenda Shaughnessy. Reprinted from “Human Dark With Sugar” with the permission of Copper Canyon Press, Port Townsend, Wash.

Her first book, "Interior With Sudden Joy," was published by Farrar, Straus & Giroux in 1999, when Shaughnessy was 29. It was a finalist for the PEN/Joyce Osterweil Award, which recognizes the work of a new poet, and the Poetry Society of America's Norma Farber First Book Award.

Writing poetry is as much about being tough as it is about being sensitive, Shaughnessy said. She tries to help students develop the ability to accept criticism of their writing.

"I want them to care enough about their writing to see it from a distance, so that they can hear when someone in class says, 'That's convoluted,' or 'That doesn't make any sense to me,'" said Shaughnessy.

Despite her early success, she has learned to take her share of criticism, especially when it was difficult to place her second book with a publisher.

"Several publishers rejected the new book," Shaughnessy recalled. "It made me understand that this kind of disappointment is part of being a poet. In a way, I had to believe in the book even more fiercely because it was so hard finding a home for it."

Eventually Copper Canyon Press accepted the book, "Human Dark With Sugar," which went on to win the James Laughlin Award from the Academy of American Poets, given for an outstanding second book by an American poet, and to be selected as a finalist for the 2008 National Book Critics Circle Award in poetry.

Shaughnessy has been writing poetry since childhood, drawn to it because "it was short and dramatic and it seemed romantic," she said. "It seemed to offer the simultaneous and attractive possibility of being deeply understood and completely misunderstood."

She finds Princeton students are much more open to poetry and its possibilities than many people she encounters, even fiction writers.

"There's a fair amount of anxiety and mistrust around poetry," she said. "I know magnificent prose writers who can write huge novels with multiple characters and interwoven subplots, who will say, 'I don't understand poetry.'" To that sentiment she responds, "It's language. It's language stripped of a narrative scaffolding that you're used to, but you're a reader and a writer, so get into it."

For Shaughnessy, poetry offers one of the most important tools for coping with life, one that she hopes to pass on to her students.

"It's helped me tremendously to know that pretty much any state I might find myself in, no matter how dark it is, no matter how difficult it is, a great poet has probably written something marvelous about it," she said. Poetry provides "a sense of connection, a sense that you're not alone. That's one of poetry's greatest gifts, and whether my students become poets or not, I want them to always have that gift." 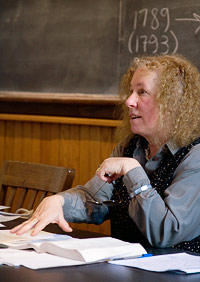 Susan Wolfson, a professor of English who specializes in Romantic-era writers, uses poetry as a way to teach students how to analyze language in any setting.

To help her students dive into the study of 18th- and 19th-century poetry, English professor Susan Wolfson often has them scrutinize contemporary language that is not part of any poem. This semester, for example, her students discussed the difference between calling an economic program "a stimulus package" or "a bailout."

"These are not random, off-the-cuff pieces of language," said Wolfson. "They're carefully crafted metaphors being used to create a narrative."

By drilling down to the agenda behind political language, Wolfson hopes to foster the skills for close reading of great works of poetry, she said.

This technique "gets students excited and empowers them as readers," said Wolfson, who specializes in teaching Romantic-era writers such as William Blake, Samuel Taylor Coleridge and Mary Wollstonecraft. "I want them to pay attention to what's at stake in words."

Poring over John Keats' odes and William Shakespeare's sonnets during her freshman year at Brown University inspired Wolfson to switch her major to English. Up until then she had planned to be a physics major. She made close reading the basis of her 30 years of scholarship in British literature, during which she has published edited editions of works by Keats, Mary Shelley and Robert Louis Stevenson, as well as written books about gender and the shaping of poetry in British Romanticism. After earning her Ph.D. at the University of California-Berkeley, Wolfson taught at Rutgers University for 13 years before coming to Princeton in 1991.

Wolfson mainly teaches courses on the Romantics and their contemporaries, British authors writing between 1780 and 1850. She finds that students sometimes approach poetry, especially poetry of another century, as if it's a foreign language. But to read the poetry of Lord Byron or Keats, as the students in her course this semester on "The Later Romantics" are doing, Wolfson maintains that "all you really need is time and a dictionary."

Honing in on a single word can demonstrate to students the payoff of reading closely. When guiding her students through a study of William Wordsworth's "Composed Upon Westminster Bridge," for example, Wolfson has drawn their attention to the poet's use of the word "smokeless" to describe the air in London at dawn. 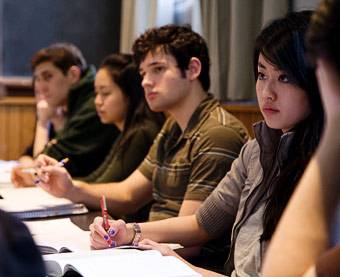 In her course this spring on "The Later Romantics," Wolfson impresses upon students the value of close reading of classic works of poetry. "I want them to pay attention to what's at stake in words," said Wolfson, who joined the Princeton faculty in 1991. She has made close reading the basis of her 30 years of scholarship in British literature.

Looking at that juncture in the poem demonstrates the way in which "poetry is a kind of a concentration of language that rewards the reader's careful attention," Wolfson said. "It's packed with information that is often subtle or disguised, and it comes alive under this kind of attention."

Eric Paulson, a junior who is taking her course on "The Later Romantics" this semester, said Wolfson brings great dynamism to the poetry being studied. "She has a real talent for enlivening the texts she presents," he said. "She has taught me that the Romantics were a rowdy bunch."

The close readings that students undertake in her classes sometimes have given Wolfson new insights into poems she has studied for years. When she taught a course on John Milton's "Paradise Lost" a few years ago, Wolfson asked students to select a word that appears in the poem and trace its use throughout the work. One student analyzed the word "undelighted," which is used by Milton to describe Satan's reaction when he finally gets a look at the Garden of Eden. The student discovered that Milton invented the word "undelighted" for that moment in the poem, something Wolfson had not known. "A lot happens in a room full of sharp readers," she said. "I learn things from my students."

And students learn reading skills that they put to use in other disciplines, they tell Wolfson.

"What they learn from a close reading of poetry they take with them to political science classes and history classes," she said. "It makes them a more careful reader of documents they had assumed were just providing information. They've become analysts of how language is organized, and how it can organize your thinking."