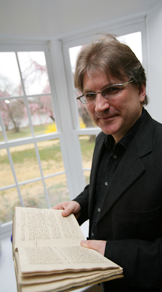 Through his scholarship and teaching, Nigel Smith is focusing attention on the works of underappreciated women writers from the 17th century. Here, he holds his copy of a 1696 printed book, “A Fountain of Gardens: Watered by the Rivers of Divine Pleasure,” by the prophet and poet Jane Lead (1623-1704).

Below left: A close-up view of the book's pages.

That soules and bodies one conception have One birth, one growth, one wast, one death, one grave That phisick workes on both, wine and disease Both Change admitt, substraction and encrease. That soules departing passe not forth entire And no power bodies can with them inspire Because oblivion thence doth things deface And dispositions are in every race ...

— A passage from Lucy Hutchinson’s “The Argument of the third booke.”

Nigel Smith is intent on correcting an injustice. It may be more than four centuries old, but for him, it is high time to make amends.

A professor of English, Smith is on a mission to bring to light the work of notable British women authors from the 17th century whose writing has been lost over time. In many cases, the work — poems, plays and fiction — was never published and exists only in manuscript form.

Smith asserts that these literary works offer unique insights into the period in which they were written, and add to our understanding of the evolution of writing by women. Now, he is sharing his discoveries about these little-known early modern writers and their remarkably distinct creative achievements through his own scholarship and teaching.

“I think our understanding of the significance of this writing is only just beginning,” said Smith. “There has been a big gap in our cultural knowledge.”

He describes the growing awareness of these writers as the result of a recovery effort that started in earnest in the late 1980s. At that time, factors such as an increased interest in manuscripts as “the new frontier” led to discoveries of original texts in previously unexplored locations, including cathedral libraries, local government record offices and private collections. Further, the rise of technology, specifically the Internet, encouraged literary specialists to share knowledge and document newly found writing through Web projects.

Last summer, Smith returned to Oxford University, where he taught before coming to Princeton in 1999 and where he earned his doctorate, to give the keynote address at an international conference on early modern women writers. He made use of the occasion to exhort literary scholars to spread the word about the rediscovered texts and their authors. “I was there to say, ‘You haven’t finished your work. You have to take this writing and go out and get the interest of the general reading public.’”

“Despite the efforts of several important feminist critics, the commonplace view is that the women’s literary tradition in Britain begins with Mary Wollstonecraft [the author of “Vindication of the Rights of Women” who lived from 1759 to 1797],” said Smith. But he said that the rediscovery of the many women writing in the 17th century tells a different story, and illustrates the diverse nature of much of these literary efforts.

It was during the 1600s, a period shaped by the tumult of the English Civil War, that many women, some of whom ran households and estates in the absence of husbands, wrote for their female friends and sometimes even for broader audiences. At this time, published books were also more readily available, and education for women was no longer solely the privilege of the upper class.

Smith singles out Aphra Behn, who was writing in the late 1600s, as “the first non-aristocratic woman to command a reputation as a playwright and to command a place in the book market and be seen as a part of literary society.” Her successful publishing experience put Behn on the road to posterity, but, until recently, few of her female contemporaries were recognized as fellow travelers. 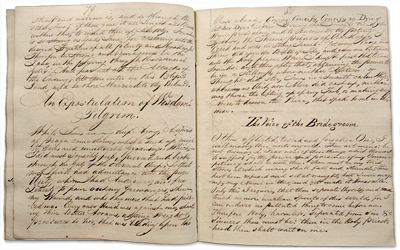 One of the literary finds that most excites Smith is Hester Pulter. Born in 1596, she lived until 1678, a long life that included giving birth to 15 children and, according to scholars, producing more than 100 unpublished poems.

Without being published, Smith said Pulter was one of many women who “never had the chance to gain reputations because their writing was for private circulation.”

Describing Pulter as a “kind of Virginia Woolf figure who writes in an extremely unusual way,” Smith said her work is so new on the scene today that only a handful of scholars know it in some detail. Her poetry survives in just one intriguing manuscript (“Hadassa[’]s Chast[e] Fanc[i]es”), he said, which was found 10 years ago “uncataloged” and is now housed at the Brotherton Library at Leeds University in England.

As a specialist of 17th-century verse, Smith, whose Longman Annotated English Poets edition of Andrew Marvell’s “Poems” is coming out in paperback this year, said that Pulter’s poetry is “not metrically very brilliant” and does not stand up in these terms to her male contemporaries, such as Marvell, John Donne, Ben Jonson and John Milton.

“But,” he said, “if you look at her imagery and understand what she’s trying to express about her relationship with her daughters, then you enter a completely new aesthetic sphere.” Smith added, “She has a way of describing very precisely either the literal appearance of her daughters, who are grown up, or as dream visions. Both kinds of descriptions are visionary.”

While the private, familial sphere was the dominant theme for 17th-century women writers, their subjects were wide ranging and included love, nature, politics, religion, death and more.

The political battles throughout the 1600s inspired many allegiances and animosities, and women were not immune to taking sides and writing about their views. Smith acknowledges that it is surprising to learn how politically aware many women were at the time, and Pulter is one example.

“What we don’t expect is that these women have competence in politics, but Pulter is a great royalist and writes some of the longest and most sophisticated poetry about Charles I and his execution,” he said. “She has things to say that you don’t find anywhere else in printed or handwritten verse.”

Similarly, another writer concerned with politics whose work he said “has gained a lot from recovery” is Lucy Hutchinson (1620-1681). She was a republican sympathizer, whose poetry — much of which was recovered in the last 15 years — is “some of the most astute political writing and shows as good an understanding of English politics as some of the greatest minds of the time, such as Thomas Hobbes,” Smith said.

Hutchinson wrote an account of the life of her husband, who fought on the side of Oliver Cromwell against the royalists, which Smith said could really be read as her own autobiography. But the poetry for which Hutchinson is best known is her translation, from Latin into English, of Lucretius’ ancient epic poem, “De Rerum Natura.”

A beneficiary of a good education, Hutchinson used her evident aptitude for Latin to take on a poem that Smith said “essentially professes atheism,” since it “describes a universe made up of atoms.” It was a bold project and a successful one — Smith lauds Hutchinson’s translation as still being one of the best.

Whenever Smith teaches Hutchinson to Princeton undergraduates, which he does in the course “The 17th Century,” he includes passages from “Order and Disorder,” a book published under her brother’s name, which has graphic accounts of childbirth. It was recovered from obscurity and attributed to Hutchinson by David Norbrook, the Merton Professor of English Literature at Oxford, in 1999.

“The passages on childbirth — the sheer experience of being a woman — put into epic verse form, have to be a first,” said Smith. “It’s both physically and psychologically close to the bone, and always gets the students’ attention.”

Another writer Smith is intent on making more visible is Katherine Philips (1632-1664), whose work circulated mostly in manuscript during her lifetime, and was printed in a complete collection after her death.

Smith says Philips is especially noteworthy for the literary salon she cultivated while living in Wales. “She corresponded with people well known on the literary map,” said Smith, observing that there was a good chance that Marvell also had read her verse in manuscript.

In particular, Philips wrote many poems to other women, leading to current-day speculation about her sexuality. “Her poems are both very refined and almost too intimate in an emotional way,” said Smith.

Like Pulter, she was also a royalist and, according to Smith, “treats love and politics of equal importance.” And like Hutchinson, she was also a translator — Philips translated a play from French by Pierre Corneille, which was performed in Dublin.

In teaching these writers, Smith, who is deputy director of Princeton’s Center for the Study of Books and Media, takes an interdisciplinary approach, folding in lessons on British political and religious history, and making connections to literary developments on the European continent.

He tells his students about the importance of Puritanism in creating many first-time authors, explaining that in order to join a Congregational church, individuals had to write an account of how they had come to be saved. Some of these “conversion narratives” — which were written by women as well as men — were published by churches, and offer slices of autobiography that, according to Smith, are sometimes “raw, unusual and unpredictable documents.”

In the undergraduate course he team-taught this semester with historian Peter Lake — “Topics in the Renaissance: Utopias in the Early Modern World” — Smith discussed some of these conversion narratives, as well as the 17th-century British writer Margaret Cavendish, who wrote poetry and a play about women going into battle to support their husbands.

Also in the works, Smith is developing a conference with Sara Poor, associate professor of German, which will focus on medieval to early modern writing across Europe. Smith expects that the conference will help to relate the accomplishments of British women writers to that of their important female counterparts writing in Dutch and German.

Doctoral student in English Lisa Wilde, who has studied several of these authors and has taken two classes with Smith, said he has an “astonishingly comprehensive knowledge of 17th-century literature” that he puts in context for his students.

“As a teacher, he’s very effective at showing the real importance women writers had within existing patterns of influence and literary interaction, rather than treating them — as many scholars do — as exceptions or special cases simply because they’re women,” she said.

Genelle Gertz-Robinson, an assistant professor of English at Washington and Lee University, on whose dissertation committee Smith served at Princeton, said he taught her to “read in the archives to find new texts, place those texts in their own bibliographic milieu, and use historical and cultural studies to make sense of them.” Now she is using his example in her own research and teaching about 17th-century women writers.

In conjunction with bringing the writing of these women authors into his and others’ classrooms, Smith is adding life to their work through his own. For example, his new version of Marvell’s “Poems” will include more annotations about their writing than when the book was first published in 2003. He also is preparing an anthology on early modern radical writing, which will discuss some of these women. Another project he is planning is a comparative study of writing in the European vernaculars — after Latin — that will cover these writers, in addition to new work on Milton and a biography of Marvell.

“The fact is,” said Smith, “there is still so much more to uncover and understand about our literary past. Our thoughtful consideration of it can and should play an important role in preparing for the future.”