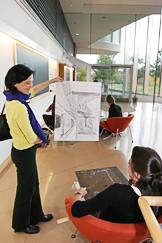 Eve Aschheim, director of the Program in Visual Arts, works with students to express themselves through drawing and painting. Here, she leads a class through a drawing exercise using the lines and shapes of the Icahn Laboratory.

Below left: Aschheim's own artwork has been acquired by several prominent museums, including the Museum of Modern Art. Her recent pieces, one of which is shown here, involve drawings and mixed media on mylar.

Bottom left: Through her own artwork and her teaching, Aschheim gently pushes the boundaries, exploring new perspectives and media.

When Eve Aschheim enters a classroom at the beginning of the semester, she wants to get her students thinking about the relationship of ideas to paper. They may be accustomed to putting their thoughts on paper in the form of an essay or a poem. She wants them to express those thoughts not with words, but with the tip of a pencil or a paintbrush.

"My class is about the kinds of questions you can ask in a work of art, and being on the edge of your own intuition," said Aschheim, who is director of the Program in Visual Arts. "I want to open up some of the more conventional notions they might have about art."

The students who take her drawing and painting classes come from a variety of art backgrounds: some have never drawn or painted before, and some have a lot of experience. Aschheim gently prods all of them to take risks and explore, and she draws on diverse sources to provide them with inspiration and insight. Gently pushing boundaries is the same approach that Aschheim takes in her own work. 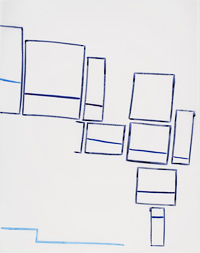 Aschheim's drawings, several of which are in the permanent collection of the Museum of Modern Art, favor simple forms — lines, dashes, ellipses — and a limited color palette dominated by white, blue and black. Aschheim is known for the subtlety and nuance of her drawings and paintings, for the luminous images she creates and for pieces that appear delicate and muscular all at once.

Aschheim, who teaches painting and introduction to drawing, arrived at Princeton in 1991. She was appointed a senior lecturer in 2001 and became director of the Program in Visual Arts two years later.

She provides students with various subject matters — landscapes, still lifes, figures — and various approaches — working from a photograph, from life, from their imagination. Technique is secondary. The idea is to get them to loosen their inhibitions and make discoveries.

"She encourages you to explore and be open-minded as long as possible," said Elizabeth Looke-Stewart, a member of the class of 2006 and a winner of Princeton's Lucas Award in Visual Arts who works as a photo editor in New York. "She also encouraged me not to be afraid to take risks and to try different ways of working."

Aschheim is known for her accessibility to students, even the ones who are not taking her classes. "While Eve Aschheim was one of the most influential professors during my Princeton career, one of the most telling characteristics of the nature of the relationship that I share with her is that she was never my professor or adviser," said Temitayo Ogunbiyi, a member of the class of 2006 who also received a Lucas Award. "Eve always made time for me and my work — meeting with me whenever I desired feedback, inviting me to studio visits she'd arranged for her class, coming to my studio at 11 o'clock on a weeknight because she knew I'd be there. She wrote numerous recommendations and put me in touch with a number of incredible people."

Aschheim finds Princeton students have a "wonderful energy. Nearly every student produces something very personal and meaningful and surprising, something you didn't know was there, and that's really what I'm trying to do. That's where new art will come from. As a teacher you have to nurture it and step aside, not intervene too much. I give them the formal structure so they can access the language of drawing and see what they can do with it."

Students from the program have gone on to promising careers in a wide range of artistic fields. Dana Brintz '02 earned a master's degree in fine art from the Chelsea College of Art and Design in London last year and has had two exhibitions of her drawings at London galleries. Fazal Sheikh '87 won a MacArthur Fellowship last year for his portrait photography of displaced people. Jodi Hauptman '86 is associate curator in the department of drawings at the Museum of Modern Art in New York.

Aschheim enjoys her role as director of the program because she loves interacting with artists who may be interested in coming to Princeton to teach.

"Finding new faculty is one of the most stimulating and rewarding parts of the job," she said. "It's an exciting time for the visual arts program. The administration has been extremely supportive, and is allowing us to reach our full potential."

The program is part of the new University Center for the Creative and Performing Arts, established by President Tilghman this year with a gift from alumnus Peter Lewis. Tilghman's initiative also includes plans to expand the size, resources and visibility of Princeton's undergraduate certificate programs in visual arts, creative writing, musical performance, and theater and dance. As part of that expansion, plans are under way to create a film studies certificate program, Aschheim said.

The Program in Visual Arts, in conjunction with the Council of the Humanities, recently has brought several well-known artists to Princeton as visiting faculty members and lecturers. Dawn Clements, who makes large panoramas that convey the feeling of living in a confined space, visited last spring as a guest printmaker and adjunct lecturer, and returns this fall to teach drawing. This year's fellows include Cuban-born photographer Abelardo Morell, Austrian filmmaker and theorist Peter Kubelka, and filmmaker and performance artist Yvonne Rainer.

A recent addition to the faculty is John O'Connor, a lecturer who does large-scale drawings that use idiosyncratic systems and graphs to register different patterns of human behavior. He will be teaching a new course called "Advanced Drawing" this fall.

"We added 'Advanced Drawing' partly in response to student demand and partly in response to the changing nature of the art world, where drawing right now is coming to the fore as a medium in its own right," Aschheim said. Drawing used to be regarded as a precursor to painting, rather than an art form itself.

Aschheim's work, which embraces drawing as an art form, has been acquired by several prominent museums. In addition to the Museum of Modern Art, her pieces are in the collections of the National Gallery of Art in Washington, D.C., the Lannan Foundation in New Mexico, the Yale University Art Gallery and the Fogg Art Museum at Harvard University, among others. A defining moment of her career occurred when a well-known collector named Werner Kramarsky visited her studio in 1995, looked at six drawings and purchased all of them. He later donated two of Aschheim's drawings to the Museum of Modern Art. "If you live in New York — if you were born in New York, like me — all you think about is MoMA," she said.

This fall her work will be on display at the Tang Teaching Museum and Art Gallery at Skidmore College in a show called "Twice Drawn." And in February 2007 she will have a show of her work on paper with one other artist, sculptor Jonathan Silver, at the Lori Bookstein Fine Art gallery in New York City.

Her work, which tends to be done on small canvases, uses abstract shapes to build complex relationships and structures. "I want to create a composition that is open, where the viewer can imagine," Aschheim said.

"The relation between her hand's irregular gestures and the blank ground upon which she chooses to make them creates an almost musical harmony, where sounds and pauses are of equal importance to the whole," wrote curator Regina Coppola in an essay accompanying an exhibition called "Eve Aschheim: Recent Work," shown in 2003 at the University Gallery at the Fine Arts Center at the University of Massachusetts-Amherst. "Some works are dynamically dense with a torrent of dashes or layers of superimposed angles and lines, while others contain no more than a handful of delicate ellipses that balance each other with rhythmic undertones of stillness."

Aschheim works in a studio in Manhattan with a view of the Hudson River. Being in New York keeps her in touch with what's going on in the art world. When she's in Princeton, she relishes having "time and space to think," she said. She also cherishes contact with her colleagues at the University, both in the visual arts program and beyond it. A few years ago she paid a visit to John Conway, the John von Neumann Professor in Applied and Computational Mathematics.

"I told him I wanted to learn about mathematics," she said. "I was hoping I could learn to think in different ways about space and geometry."

Conway was eager to share his knowledge, and later came to one of Aschheim's classes to talk to her students about hyperbolic space and geometry, making sketches for the students.

Aschheim has pushed the boundaries of her work in recent years by experimenting with a new medium, thanks to a collaboration with professor of visual arts Emmet Gowin, a photographer.

"He saw my drawings and suggested we try to make photograms," Aschheim said. Working in a photography studio at 185 Nassau St., the two took several of Aschheim's drawings on mylar, laid them on photo paper, exposed them to the light and developed the photos. Marks that Aschheim had erased from her drawings during the creative process were now visible. For Aschheim, the photograms were a way to see where she's been and where she's going — and to examine how she got there.

"You can see how the drawing was made," Aschheim said. "All this hidden information comes out."

In the classroom, Aschheim helps students explore new ground and examine their own work in fresh ways. She has an "eye for untrodden paths," Ogunbiyi said.

"She pushed us to expand our art perspective, and encouraged us to explore a range of drawing mediums and discover new ways of expressing our work," said Veneka Chagwedera, who will be a sophomore this year.

For Aschheim, what she seeks to achieve in her own artwork is closely related to what she strives for in the classroom.