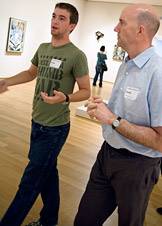 Princeton Professor Hal Foster (right), an authority on modernist and contemporary art and theory, developed the course on "The Origins of Abstraction" with Leah Dickerman, curator of painting and sculpture at the Museum of Modern Art (MoMA), and Molly Warnock, a lecturer in Princeton's Department of Art and Archaeology. The seminar was organized to contribute to the planning of an exhibition at MoMA to mark the 100th anniversary of the emergence of the abstract art movement. The course included three visits to the museum, where Foster and sophomore Chris Green (left) discussed some of the abstract works on view.

Class: "Seminar in Modern Art: The Origins of Abstraction"

Instructors: Hal Foster, Princeton's Townsend Martin, Class of 1917, Professor of Art and Archaeology; Leah Dickerman, curator of painting and sculpture at the Museum of Modern Art (MoMA); and Molly Warnock, postdoctoral research associate and lecturer in Princeton's Department of Art and Archaeology. Foster, an authority on modernist and contemporary art and theory, is a 1977 graduate of Princeton and has served on the University faculty since 1997. Dickerman, who has curated major shows on the Dada and Bauhaus movements, among other exhibitions, joined MoMA in 2008 after serving as acting head of modern and contemporary art at the National Gallery of Art in Washington, D.C. Warnock is a specialist in modern art history who earned her Ph.D. from Johns Hopkins University in 2008.

Description: The seminar was organized to contribute to the planning of an exhibition at MoMA, curated by Dickerman, to mark the 100th anniversary of the emergence of abstraction in the visual arts around 1912. The students examined original art and writings by seminal visual artists such as Vasily Kandinsky, Robert Delaunay, Fernand Léger and Piet Mondrian to investigate the beginnings of abstraction, its philosophies and ideologies, and its effects across the arts. The course enrolled 16 undergraduate and graduate students from the Department of Art and Archaeology, as well as other disciplines including German, comparative literature and architecture.

The seminar included three visits to MoMA, where the students and instructors toured galleries of abstract works and studied art works and documents in the museum's archives. In their classroom sessions, the students worked in pairs on exercises in which they proposed lists of images by particular artists for inclusion in the exhibition. "The students know they are not collaborators per se, but they have been very actively engaged," Foster said. "They have been able to work both on the art historical side of the material and the curatorial side. Even though there is a connection, they're very different operations. Art historians are not constrained by checklists, loan permissions, insurance and so on. They (the students) had to make their intellectual choices about the works of art pragmatic as they proposed what works they wanted to be included in the show." 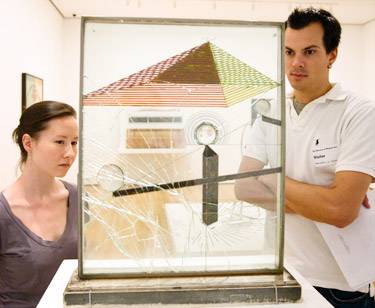 Inspiration: In her planning for the exhibition, Dickerman approached Foster, her longtime colleague, about collaborating on a seminar to be divided between Princeton and MoMA. "The excitement of the course is to work on these different levels -- historically and theoretically, but also in the context of the exhibition," Foster said. "I think that makes it real for the students. They feel engaged because they have helped Leah work through the parameters of the show. There's a real stake here."

Dickerman said, "For me, in this early planning stage of the exhibition, teaching is a great structure to try to articulate defining concepts and to try out ideas on an audience. Both Hal and the students were great interlocutors with lots of ideas and differing perspectives. It was kind of a laboratory for thinking out what the major themes of the show should be. It also was great to suggest to students how working on exhibitions might be an important form of scholarship that allows you to see a vast number of objects, to think about the way things might work together visually, to set up thematic points, and to try to articulate key questions for a whole community of scholars."

Students say: "I couldn't pass up the opportunity to participate in an ongoing discussion about a major upcoming exhibition with a curator of Leah's caliber," said Chris Reitz, a graduate student in art and archaeology. "She's been responsible for some of the most significant exhibitions of the historical avant-gardes in the last half decade, and I was hoping to gain some insight into her curatorial process -- which is to say, I'm a big fan. It also seemed like a terrific opportunity to have a serious and sustained discussion about objects based in both historical contextualization and contemporary reception, which is a rare opportunity in a seminar setting."

Senior Isia Jasiewicz, an art and archaeology major, said she was excited to take a course with both Warnock and Foster, who have advised her independent work in the department. She also wanted to build on her previous studies of abstraction. "The moment that abstraction was first articulated in the 20th century represented such a major milestone not only in visual expression, but also in art theory and criticism. The years that we studied in the course were so culturally formative, and thinking about how to present this moment in history in a museum exhibition is an interesting inroad to understanding the time period," she said.

Jasiewicz also enjoyed learning about curatorial perspectives from Dickerman. "Talking with her about how to exhibit the origins of abstraction not only taught me a new way of looking at this moment in art history, but also gave me a glimpse at how curators put together a show," she said.

Dickerman (center) and Foster led a discussion with the students in front of Francis Picabia's 1914 painting, "I See Again in Memory My Dear Udnie." Dickerman said that the seminar has helped her to articulate major thematic points as she plans the 2012 exhibition. (Artwork © 2010 Artists Rights Society [ARS], New York/ADAGP, Paris)