Yoshiaki Shimizu, the Marquand Professor of Art and Archaeology, Emeritus, and a renowned scholar of Japanese art history, curator and Princeton graduate alumnus, died on Jan. 20, 2021, of lung cancer at home in Portland, Oregon. He was 84. 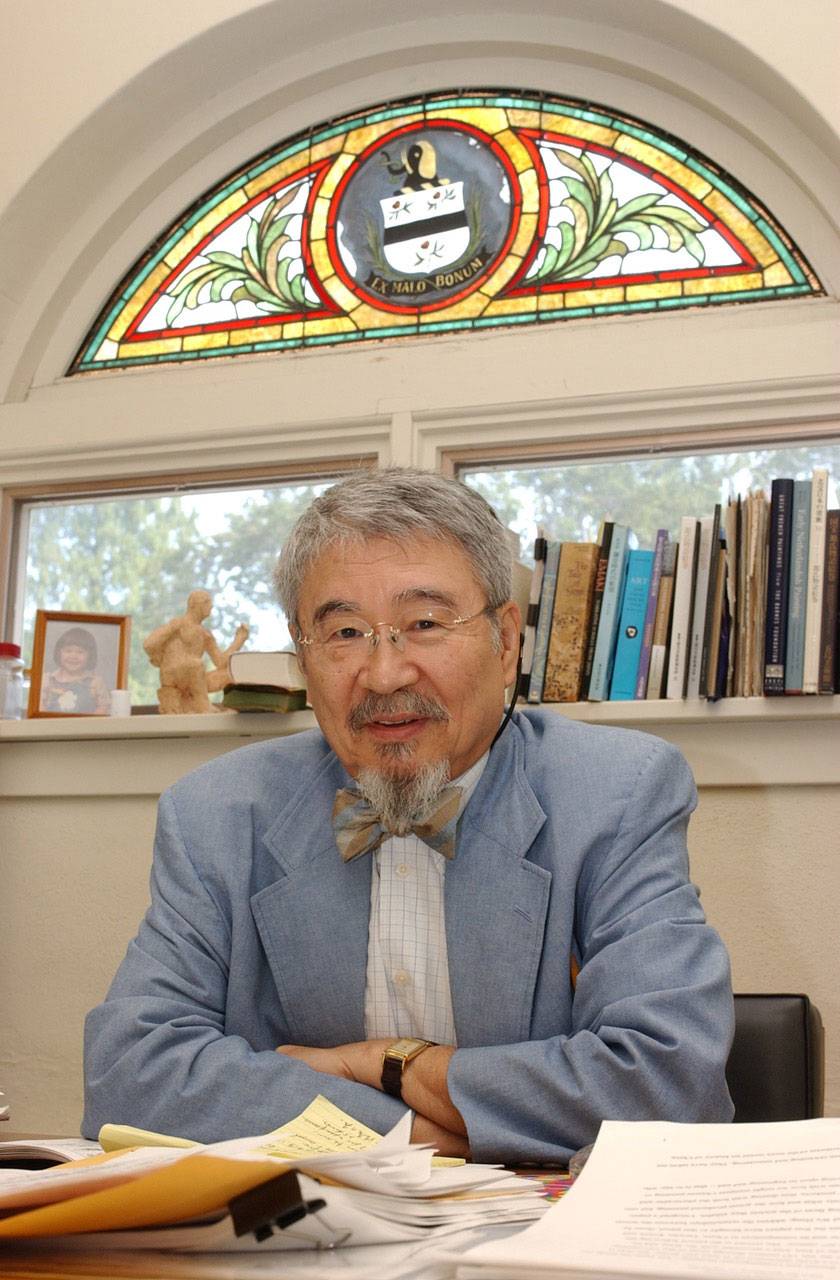 His research interests in Japanese art included Japanese ink painting of the medieval period, the arts of Zen Buddhism, Heian and Kamakura narrative painting, Sino-Japanese cultural history of the 12th through the 16th century, Chinese and Japanese calligraphy, and Kamakura Buddhism and its art.

“His teaching and advising in the department reflected his deep investment in object-based art-historical inquiry as well as his wide-ranging expertise, which spanned multiple centuries, regions and media, and contributed substantially to the literature and knowledge of the field,” said Rachael DeLue, the Christopher Binyon Sarofim '86 Professor in American Art, professor of art and archaeology and American studies and department chair. “Students and colleagues will remember his wit, at times mischievous, and his willingness to poke fun at himself as well as his interest in topics far afield from his own, an openness to other areas of inquiry that made him an ideal interlocutor or sounding board for colleagues and students from many different fields.”

DeLue continued: “I will remember Yoshi as a distinguished scholar whose insights expanded and transformed the study of Japanese art and as a professor who inspired his students to undertake equally imaginative and groundbreaking work, but I will also remember him as an accomplished painter, a consummate host, an explainer of all things Princeton to a new and nervous assistant professor, and a provider of Legos and M&Ms to my toddler son when my family visited him in Portland, Oregon, my hometown and the place to which he relocated after he retired.”

Born on Feb. 27, 1936 and raised in Tokyo and outside Kumamoto in rural Kyushu (where his family fled to escape American bombing during World War II), Shimizu moved to the United States in 1953 to attend St. Paul’s School in New Hampshire. He earned his bachelor’s from Harvard University in 1963, and his master’s from the University of Kansas in 1968. He earned his Ph.D. from Princeton in 1975, studying under the famed Japanese scholar Shujiro Shimada, who was instrumental in the creation of the Program in Chinese and Japanese Art and Archaeology in 1964. After teaching at Princeton briefly and the University of California-Berkeley, Shimizu spent five years as the curator of Japanese art at the Freer Gallery of Art in Washington, D.C. and rejoined the Princeton faculty in 1984, taking up the position formerly held by Shimada. He transferred to emeritus status in 2009.

Shimizu and Jerome Silbergeld, the P. Y. and Kinmay W. Tang Professor in Chinese Art, Emeritus, and professor of art and archaeology, emeritus, were close friends and colleagues for more than 50 years, arriving at Princeton as graduate students at the same time.

“Yoshi was more of an adventurer than most people knew and there was maybe too much of Yoshi for any one person to know,” Silbergeld said. “There was Yoshi the scholar of Japanese and Chinese art, traditional in approach but wide-ranging, bold, and teacher to a new generation of lead scholars; there was Yoshi, the artist; there was Yoshi who, still new to America and in the midst of his college career in the 1950s, came to know the New York beat scene and literary legends like Allen Ginsberg and Gary Snyder, and whose calligraphy is on the cover of Snyder's final book, ‘The Great Clod’; there was Yoshi the World War II scholar, profoundly moral in his study of it; there must be Yoshis I never met.”

John Wilmerding, the Christopher Binyon Sarofim '86 Professor in American Art, Emeritus, and professor of art and archaeology, emeritus, and Shimizu go even farther back. Shimizu was a year ahead of him at St. Paul’s School and at Harvard. Wilmerding joined the Princeton faculty in 1988 at Shimizu’s invitation.

“Quite simply, he emerged as the most distinguished and influential historian of Japanese art of his generation,” Wilmerding said. “He was also an accomplished painter in the 1950s and ’60s, in the abstract expressionist mode. This gave him a particularly sympathetic ability to talk about artists and the making of their work.”

“I have had the great pleasure and honor of knowing Professor Shimizu for more than 35 years, as his graduate student, as his colleague, and as a friend and travel companion,” said Andrew Watsky, a 1994 graduate alumnus, professor of art and archaeology who specializes in Japanese art history, director of the Program in East Asian Art and Archaeology, and director of the P.Y. and Kinmay W. Tang Center for East Asian Art at Princeton. “His rigorous scholarship has been a model for me and for so many in our field, an accomplishment that will endure. The importance and joy for him of encountering the actual work of art was palpable, and a bedrock of his teaching.”

He and Shimizu co-taught an undergraduate seminar in spring 2009 — Watsky’s first year back at Princeton as a professor and Shimizu’s last before retirement.

“We spent many class sessions in front of paintings in the Princeton University Art Museum (and on a day-trip to the Freer Gallery of Art): he trained the students in the fine art of close looking and showed them how it leads to knowledge and understanding,” Watsky said. “Our recent Zoom sessions often included discussions of something hanging on his wall or mine, his pleasure in the work of art a constant in his remarkable life.”

Shimizu published innovative essays on a wide range of topics, including narrative paintings by the Chan monk painter Yin Tuoluo, seasonal paintings and poetry in early Japan, workshop management of the Kano painting studio and Zen art, and Japanese ink painting from the 14th century on.

In 2013, he was inducted into the American Academy of Arts and Sciences. He served on the board of directors of the College Art Association of America and on the editorial boards of Archives of Asian Art and Art Forum, a Kyoto-based journal of arts and art history.

While at Princeton, Shimizu continued to curate major museum exhibitions, most notably serving as senior curatorial adviser for "Japan: The Shaping of Daimyo Culture 1185-1868," at the National Gallery of Art in Washington, D.C., in 1988. The exhibition examined the dual ambitions of premodern Japanese warriors to excel at both the arts of war, as reflected in arms and armor, and the arts of peace, as represented by paintings, lacquer, calligraphy and other visual arts that the warriors either commissioned or produced themselves.

At Princeton, he taught undergraduate courses including “Early Japanese Art,” “Late Japanese Art” and “Narrative Scrolls.” His graduate seminars included “Early Kano School,” “Reading and Translation of Japanese Arts Texts” and “Muromachi Ink Painting,” among many others, fostering a generation of scholars who now occupy major academic and museum positions.

Yukio Lippit, a 2003 graduate alumnus and the Jeffrey T. Chambers and Andrea Okamura Professor of History of Art and Architecture at Harvard, said that Shimizu remained close, lifelong friends with his students. In 2007, Lippit and Gregory Levine, a 1997 graduate alumnus (now a professor at the University of California-Berkeley) co-curated “Awakenings: Zen Figure Painting in Medieval Japan,” an exhibition at the Japan Society in New York City; Shimizu served as senior curatorial adviser.

“With every passing year, I appreciate more and more Professor Shimizu’s approach to teaching and conceptualizing art,” Lippit said. “He had a disarming way of combining profound erudition in Zen Buddhism and Sino-Japanese classics with surprising, everyday, lowbrow analogies.”

“Professor Shimizu was a scholar of such depth and breadth, his contribution to Japanese art history was immense. This is really an indescribable loss to the field,” said Gennifer Weisenfeld, a 1997 graduate alumna and a professor in the Department of Art, Art History and Visual Studies and former dean of the humanities at Duke University.

Weisenfeld said she considers herself lucky to have found a teacher and mentor to support her interest in pursuing modern Japanese art history at a time when there were no programs specializing in this area. “Professor Shimizu’s deep and abiding intellectual curiosity, and his genuine interest in my work, enabled us to stay connected all these years beyond the walls of Princeton. There aren’t sufficient words of gratitude to acknowledge this lifelong gift.”

“Professor Shimizu was an eternally youthful soul, whose boundless enthusiasm for Japanese art was infectious,” said Janice Katz, a 2004 graduate alumna and the Roger L. Weston Associate Curator of Japanese Art at the Art Institute of Chicago. “With each new image he showed in class, he would say ‘Now, look at this,’ newly amazed by a work of art he must have seen a thousand times.”

Katz said he remained supportive of his former students. “I remember in particular one day at the museum where I now work when he came to art storage to see selected works as part of a group of scholars. It was as if he was teaching his graduate seminar at Princeton again, with the same joy and energy as ever. We were all entranced.”

Shimizu also brought his scholarly and curatorial expertise to bear on the Princeton University Art Museum in a variety of ways, beginning while still a graduate student, when he co-authored, with the late Carolyn Wheelwright, a 1981 graduate alumna, “Japanese Ink Paintings from American Collections: The Muromachi Period: An Exhibition in Honor of Shujiro Shimada,” a book/catalog for an exhibition that Shimizu helped organize at the museum. He also gave public lectures at the museum.

“Yoshi was one of those multifaceted art historians who shaped a field in a way that would seem improbable or overweening in today’s world,” said James Steward, the Nancy A. Nasher-David J. Haemisegger, Class of 1976, Director of the Princeton University Art Museum, and lecturer with the rank of professor in art and archaeology.

“As a curator, his exhibitions were bold and groundbreaking, adapted beautifully to contexts as different as Princeton, the Freer Gallery, and the National Gallery in Washington, D.C.,” Steward said. “As a teacher, he followed his own mentor in shaping the outlook and careers of generations of future scholars. As a scholar, he blazed trails that introduced even someone like me, well outside his own field, to the visual and intellectual pleasures of artists too little known in the west, such as Ito Jakuchu. On my most recent visit to Japan, as [I] looked at works by painters like Jakuchu given new life by his scholarship, Yoshi’s presence hovered around us in spirit even though not with us in body.”

To mark Shimizu’s retirement, a two-day symposium on Japanese art was held at the University, featuring scholarly papers delivered by virtually every professional historian of Japanese art he taught at Princeton (subsequently published with the title “Crossing the Sea: Essays on East Asian Art in Honor of Professor Yoshiaki Shimizu” by the Tang Center), and the Princeton University Art Museum hosted an exhibition titled "Memorable Encounters from Honen to de Kooning: In Honor of Yoshiaki Shimizu." Among the works that reflected Shimizu’s numerous art interests, the exhibition also included a small watercolor titled “Self-portrait,” 1957-58, and a large, colorful oil painting titled “Untitled,” 1991, both by Shimizu.

He is survived by his brothers, Kazuaki, Nobuaki, and Tadaaki and their families; his wife, Mary Hirsch; former wife and mother of his children, Patricia Cuyler, a 1977 Princeton alumna; his children, Karen, Kenny, Keto and Kei; and his grandchildren, Akiko, Lydia, Jean Ichiro, Jin Remi and Arthur James, all of whom miss him dearly.

View or share comments on a blog intended to honor Shimizu’s life and legacy.