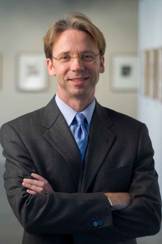 James Steward, a skilled arts administrator and a specialist in 18th- and 19th-century European art and culture, has been selected as director of the Princeton University Art Museum.

Steward, director of the Museum of Art and a faculty member at the University of Michigan since 1998, will begin his work at Princeton in late April.

"James Steward is a distinguished scholar, a gifted manager and a proven leader in the museum world," said Princeton Provost Christopher Eisgruber, to whom he will report. "At the University of Michigan, he has presided over a successful fundraising campaign that has added new galleries and public spaces to the university's museum and expanded its collection substantially. We are wonderfully fortunate that he has agreed to become the next director of the Princeton University Art Museum. PUAM is home to a splendid collection and a talented staff, and I am confident that James Steward's insight and skills will enable him to guide this extraordinary institution to even greater successes in the future."

At the Michigan museum, Steward was responsible for overseeing the planning, construction and fundraising for a $42 million expansion and restoration designed by Allied Works Architecture. The museum's recently completed fundraising campaign secured more than $62 million in capital, endowment and operational gifts. He has developed a program of exhibitions and scholarly and public programs that has included major projects such as "The Romanovs Collect: European Art From the State Hermitage Museum," "Georgia O'Keeffe and the Sublime Landscape" and "The Lens of Impressionism," which will open this October.

Under his leadership, the museum's collection has grown by some 3,500 works of art, bringing it to a total of nearly 19,000 objects -- an increase of more than 20 percent in a decade. He also has taught courses on 18th-century art and museum studies.

"He is a first-rate scholar-director," said John Wilmerding, the Christopher Binyon Sarofim '86 Professor in American Art Emeritus at Princeton, who chaired the search committee. "He's been an accomplished director of a major university art museum. He has all the experience of dealing with a building program. He has worked with a very broad constituency. He's had an active education program, not just with the university but with the wider public. He has all the elements that make us feel he is perfectly prepared to take on this position. He'll be able to hit the ground running -- there won't be much of a learning curve."

Steward was appointed an assistant professor of the history of art when he became director of the University of Michigan's Museum of Art in 1998. He was promoted to associate professor in 2001 and professor in 2003.

He came to Michigan from the Berkeley Art Museum at the University of California, where he served as curator and assistant director, and then chief curator between 1992 and 1998. While there, he organized numerous exhibitions ranging from the art of ancient Greece to contemporary painting, including the exhibition "The New Child: British Art and the Origins of Modern Childhood," which was also the subject of his first full-length book, and "When Time Began to Rant and Rage: Figurative Painting from 20th-Century Ireland."

Steward earned his bachelor's degree in French, history and art history with honors from the University of Virginia. He also studied at the Sorbonne, where he gained his first professional museum experience through a research appointment at the Louvre.

He studied for a master's degree in the history of art at the Institute of Fine Arts at New York University, where his research focused on two disparate areas: 19th-century French art and national identity, and archaic sculpture of ancient Greece. He earned his Ph.D. in the history of art from Oxford University, where he wrote his dissertation on  representations of childhood and family relationships as revealed in 18th-century British art under the tutelage of the distinguished art historian Francis Haskell.

"I'm thrilled and honored to be joining Princeton University at this exciting time, especially in light of President [Shirley M.] Tilghman's deep commitment to the arts," Steward said. "The museum's collections are among the finest of any art museum in the country; coupled with the strengths of the museum's staff, the University's faculty and of a visionary administration, and the broad resources that can support the museum's work, it's an honor to have this opportunity to lead the museum to new levels of excellence in the years to come."

Founded in 1882, the Princeton University Art Museum features a distinguished collection of approximately 70,000 works ranging from ancient to contemporary art, and concentrating geographically on art of the ancient Americas, the United States, the Mediterranean regions, Western Europe, Asia and Africa. Among the greatest strengths are the collections of Greek and Roman antiquities; Chinese art, with important holdings in bronzes and tomb figures, painting and calligraphy; the art of the ancient Americas, with remarkable examples of the art of the Maya; and Western European and American art, with significant examples from the Renaissance through the 19th century. The museum has outstanding collections of old master prints and drawings, a comprehensive collection of original photographs, and a growing collection of modern and contemporary art. In 2008, the museum attracted more than 100,000 visitors.

The museum is an important component of Tilghman's arts initiative, which was announced in 2006. It calls for new gallery spaces in the proposed arts and transit neighborhood near University Place and Alexander Street and for better integration of the museum's exhibitions with the general intellectual life of the University.

"I'm particularly excited to think about ways to continue growing and strengthening the museum's exhibitions program, its extraordinary collections and its engagement with the breadth of the University's student body and with the broader public throughout the Northeast and Mid-Atlantic regions," Steward added.