A $4.5 million gift from Allen R. Adler, a member of Princeton's Class of 1967, and his wife, Frances Beatty Adler, will endow a curatorship, lectureship, and a programs and exhibition fund at the Princeton University Art Museum.

The gift's two funds will focus on European art from the medieval to post-impressionist periods — already a significant strength — with the goal of increasing the museum's leadership in this field. The Allen R. Adler, Class of 1967, Distinguished Curatorship at the Princeton University Art Museum and Lectureship in the Department of Art and Archaeology, and the Adler Curatorial Leadership Fund will support a curator-educator to study, preserve, interpret and enhance Princeton's collections and to mount exhibitions. 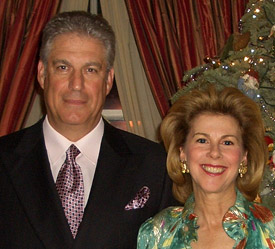 Allen R. Adler, a member of Princeton's Class of 1967, and his wife, Frances Beatty Adler, have given a $4.5 million gift that will endow a curatorship, lectureship, and a programs and exhibition fund at the Princeton University Art Museum. (Photo courtesy of the Adlers)

"Rarely does a single gift encompass so many aspects of our art museum's mission," said President Shirley M. Tilghman. "By enabling Princeton to recruit an accomplished scholar-curator in the field of European art and by making possible an ambitious range of curatorial, scholarly and educational activities, the Adlers' generosity will allow us to extend the museum's reach and impact on our campus, in our community and around the world. I am deeply grateful to Allen for his dedication to the arts and to his alma mater."

James Steward, the museum's director, said: "The Adlers' groundbreaking gift grows out of their fundamental conviction that nothing is more significant in understanding art than close and immediate contact with the original object. This gift is a visionary commitment to the essential role of the curator at the heart of the museum enterprise, and will enable a distinguished scholar to organize major exhibitions, to identify the acquisition of significant new works of art for the collections, and to teach our undergraduates and graduate students and help advance their understanding and scholarship."

The Princeton University Art Museum, the Department of Art and Archaeology, and the Marquand Library of Art and Archaeology together have served as one of the nation's great research centers in the visual arts for more than a century. "We have long been leaders in the study of European art, and this gift will assure that innovative teaching from great works of art — teaching that can cast a transformative spell over generations of students — remains at the heart of the Princeton experience," Steward added.

The Adlers are longstanding patrons of the arts, with a particular interest in European and American art ranging from Renaissance sculpture to contemporary photography. Allen Adler, president of Allen Adler Enterprises in New York, serves on the 20-member Advisory Council of the Princeton University Art Museum. He is a cum laude graduate of Princeton, where he majored in the Woodrow Wilson School of Public and International Affairs and played on Princeton's nationally ranked basketball teams of 1965 and 1967. He holds an MBA from the Harvard Business School, where he was a Baker Scholar, the school's top academic honor. His long history of service to Princeton includes 10 years as president of his class. He is a trustee of Rockefeller University and the Simon Wiesenthal Center and a member of the Council on Foreign Relations.

Frances Beatty Adler is vice president of Richard Feigen and Co. in New York. A graduate of Vassar College, she holds a Ph.D. in art history from Columbia University and is chair of the board of The Drawing Center in Manhattan.

Allen Adler previously endowed a program fund at the Princeton University Art Museum in support of its ambitious schedule of exhibitions and scholarly publications. He is also a longtime supporter of other University programs, including Annual Giving, and created the Allen R. Adler Scholarship Fund, which provides financial aid to undergraduates.

"I've been particularly impressed by the work the museum has been doing in the past few years since James arrived as director in 2009, and am committed to working with him to do nothing less than build the finest university museum in the country," Adler said. "We are enormously excited by the opportunity to bring an internationally prominent curator to Princeton who will deepen the ties between the museum and the Department of Art and Archaeology, and to provide them with a fund for groundbreaking exhibitions and research. Our hope is to further enrich the study of art for generations of Princetonians and the wider public."

The Adler gift is part of Aspire, the University's five-year fundraising campaign that concluded on June 30 after raising $1.88 billion. The campaign included a commitment to the visual and performing arts as an essential element of the Princeton experience. Alumni and friends have provided significant support for a range of programs at the museum, including establishing endowments for its directorship as well as curatorships of modern and contemporary art, prints and drawings, photography, American art, and Asian art, and for its associate director for education.

Founded in 1882, the Princeton University Art Museum is one of the nation's leading art museums. Its collections feature approximately 72,000 works of art, ranging from ancient to contemporary and concentrating geographically on the Mediterranean regions, Western Europe, Asia and the Americas, with particular strengths in Chinese painting and calligraphy, the art of the ancient Americas and pictorial photography.