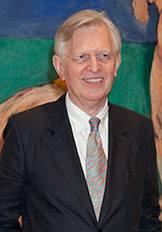 John Elderfield, chief curator emeritus of painting and sculpture at the Museum of Modern Art in New York City, has been named the first Allen R. Adler, Class of 1967, Distinguished Curator and Lecturer at the Princeton University Art Museum.

Elderfield will begin his work at Princeton by offering a series of public lectures in the spring and is expected to teach his first course in European modern art in the fall of 2015.

"With the arrival of John Elderfield at Princeton, both the art museum and our Department of Art and Archaeology build on a shared tradition of art historical leadership and are poised to achieve yet greater impact for our students and for scholars around the world," said Princeton University President Christopher L. Eisgruber.

The curatorship was made possible by a $4.5 million gift from Allen Adler, a member of Princeton's Class of 1967, and his wife, Frances Beatty Adler. The gift, bestowed in 2012, facilitated the endowed curatorship and an accompanying program fund at the art museum.

"I am delighted to welcome John Elderfield to Princeton's curatorial team and look forward to working closely with him to enhance our program in the art of the 19th and 20th centuries," said James Steward, director of the Princeton University Art Museum. "I cannot imagine anyone who would better embody the endowment's commitment to bringing a curator of distinguished achievement to our campus. We are profoundly grateful to Allen and Frances for their generosity and vision."

The Adler Distinguished Curatorship will increase the museum's leadership in European art from the medieval to modern periods as well as enrich the tradition of object-based study at Princeton, including preparing students for careers in museums and the academy.

"We are very pleased to have John Elderfield join our faculty and look forward to his sharing with our students his great breadth of experience in the worlds of museums, curatorship and scholarship," said Michael Koortbojian, chair of the Department of Art and Archaeology and the Moses Taylor Pyne Professor of Art and Archaeology.

Born in Yorkshire, England, Elderfield studied fine art at the University of Leeds and received his Ph.D. from the Courtauld Institute of Art, University of London, in 1975.

That same year, he joined the Museum of Modern Art (MoMA) as curator of painting and sculpture. Over more than 30 years there, he held a variety of positions including director of the Department of Drawings, chief curator-at-large, and the Marie-Josée and Henry Kravis Chief Curator of Painting and Sculpture, in which he reinstalled the museum's painting and sculpture collection in 2004 in its newly rebuilt premises.

Since 2012, Elderfield has been an independent curator and art historian as well as a consultant to the Gagosian Gallery, where he has curated exhibitions including "Painted on 21st Street: Helen Frankenthaler from 1950 to 1959" (2013) and — opening in February — "In the Studio," an exploration of paintings of artists' studios from the 18th through the 20th centuries. Also forthcoming is "Paul Cézanne: Portraits," which will debut at the Musée d'Orsay, Paris, in 2017 before traveling to the National Portrait Gallery, London, and the National Gallery of Art in Washington, D.C.

Elderfield has written 24 books and catalogues and nearly 100 scholarly articles. Selected awards include the Mitchell Prize in Twentieth-Century Art for "Kurt Schwitters" (1986), Time magazine's "100 most influential people of the year” (2005), and the Officier dans l'Ordre des Arts et des Lettres from the French government (2006). He has also been a fellow of the John Simon Guggenheim Memorial Foundation (1972), a visiting fellow at the Getty Research Institute (2001), and an associate fellow of the American Academy in Rome (2006).