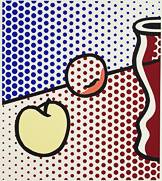 Roy Lichtenstein's color screenprint "Still Life With Red Jar" (1994) is one of more than 80 works on display in "Pop Art at Princeton: Permanent and Promised." The exhibition, which runs through Aug. 12, highlights the Princeton University Art Museum's comprehensive collection of paintings, prints, drawings and sculpture by leading figures of the American Pop art movement. 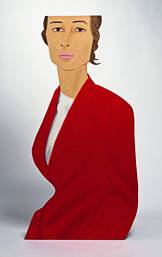 An exhibition celebrating the Princeton University Art Museum's permanent collection and promised gifts of Pop art will be on view through Sunday, Aug. 12.

"Pop Art at Princeton: Permanent and Promised" highlights the museum's comprehensive collection -- acquired over the last 30 years through purchases, bequests and gifts, both past and promised -- of paintings, prints, drawings and sculpture by leading figures of the American Pop art movement.

The exhibition also includes examples of seldom seen later works by Robert Indiana, Alex Katz, Roy Lichtenstein, Claes Oldenburg and Coosje van Bruggen, Andy Warhol and Tom Wesselmann, providing a broad historical overview of Pop art as it has been practiced from the movement's origins to the present day.

The exhibition is complemented by the publication of "Pop Art: Contemporary Perspectives," the first in a new series of monographs that will offer in-depth explorations of the museum's rich collections.

"Over the last 30 years, the Princeton University Art Museum has steadily augmented, by gift and purchase, its collection of Pop material," said Susan Taylor, the museum's director. "These generous promised gifts highlight the significance of Pop art and mark an important addition to the museum's collections in contemporary art. The pairing of the exhibition and the new museum publication series represents a singular opportunity for the museum to fulfill two fundamental, interrelated aspects of our mission: building the collection and advancing scholarship." 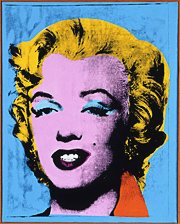 Taylor added that Princeton has a long tradition of interest in modern and contemporary art. "Since the early 20th century, the University's alumni and faculty have included important historians of modern art who also have been influential critics of contemporary practice -- Alfred Barr, William Seitz, Sam Hunter, Michael Fried, Rosalind Krauss, Thomas Crow and Hal Foster, among others."

The exhibition, which presents more than 80 works, is installed in two special galleries and is organized around the works of individual artists.

The first gallery features the prints and sculpture of Indiana, a witty wall piece by Allan D'Arcangelo and cut-out portraits by Katz, all pointing toward historical traditions in American art that have been imaginatively reinterpreted by these Pop artists. The works in this gallery also introduce some of the subjects, cultural issues and revolutionary techniques of the Pop era, through major prints by Jasper Johns, Robert Rauschenberg and Jim Dine, as well as Dine's five-paneled construction "The Art of Painting" (1972). 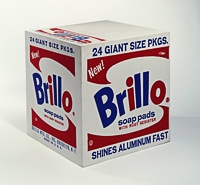 The second gallery concentrates on promised gifts of works by Wesselmann, Oldenburg and Van Bruggen, Warhol and Lichtenstein, and selected works from the museum's permanent collection by George Segal, James Rosenquist and Edward Ruscha. The exhibition compares several artists' early and later treatments of a single subject, pairing Wesselmann's molded plastic "Still Life #54" of 1965, for example, with his laser-cut steel "Still Life With Orange and Tulip" of 1986-92. The group of promised gifts is particularly strong in the rarely discussed late sculpture of these artists, and the exhibition provides a number of opportunities to examine drawings and maquettes along with the finished pieces. Renowned curator, collector, art historian and professor of American art John Wilmerding has promised a major gift of Pop art to the museum.

"Pop Art at Princeton" also features representations of the iconic motifs that became signature images for these artists in the Pop era -- Johns' targets, Dine's bathrobes and paintbrushes, Warhol's soup can and portrait of Marilyn Monroe -- while the darker side of American culture will be presented in Rauschenberg’s layered illustrations appropriated from the news media, and in Warhol’s screenprinted images of social disaster.

The museum is open from 10 a.m. to 5 p.m. Tuesdays through Saturdays and from 1 to 5 p.m. Sunday. It is closed on Mondays and major holidays.