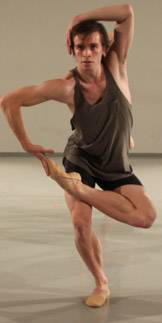 Over 50 Princeton undergraduates — from a range of academic disciplines but with a united love of dance — will perform in the Spring Dance Festival Feb. 20-22 at the Berlind Theatre at McCarter Theatre Center. Above: Junior Bri White rehearses Stephen Petronio's "Lareigne," staged by Ori Flomin.

Photo by M. Teresa Simao, Lewis Center for the Arts

Imagine four dancers in a studio. Each has a different story that brought them into the dance community at Princeton University; each has a different major and different career aspirations. All have been rehearsing since September four to five hours weekly in preparation for the Lewis Center for the Arts' 2015 Spring Dance Festival.

They are among over 50 Princeton undergraduates who will appear in the festival. Performances will take place at 8 p.m. Friday, Feb. 20; at 2 p.m. and 8 p.m. Saturday, Feb. 21; and at 1 p.m. Sunday, Feb. 22, in the Berlind Theatre at McCarter Theatre Center. The program includes four repertory works by internationally renowned choreographers and two new pieces created with guest artists.

Dance can 'open up a new world'

Senior Tula Strong grew up outside Los Angeles and started taking Polynesian dance classes at age 5 at a community center. She joined a dance club in high school, but it was not until she arrived at Princeton that she began to explore other forms of dance.

In her first semester, she took an introductory course with Aynsley Vandenbroucke, a lecturer in dance and the Lewis Center. "It opened up a new world to me," said Strong, who is majoring in comparative literature and pursuing a certificate in dance.

Strong said she has found, in choreography, a powerful means of communication and a calling. After graduation, she hopes to earn an M.F.A. and teach at the university level, as well as work as a choreographer. 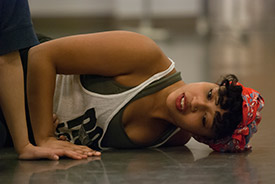 In the Spring Dance Festival, Strong will appear in two new works, both created in collaboration with the students. Harlem-based choreographer Marjani Forté, whose pieces often address cultural and political issues, worked with a diverse cast of student dancers, drawing on their own experiences, to create "CUSP." Strong said she was interested in working with Forté because of the way the choreographer uses dance as a means to see the world. The second piece, "Knee Play," choreographed by David Neumann with students, features spoken word and dance. "He merges dance and theater and combines genres of dance like modern and hip-hop along with spoken text in experimental ways and with cool music," Strong said.

Strong received an Alex Adam '07 Award from the Lewis Center, using the grant in summer 2014 to take classes with Bill T. Jones/Arnie Zane Dance Company; Urban Bush Women; Ronald K. Brown's dance company; and Dean Moss, an experimental interdisciplinary artist, all based in New York City. "I found many of these dance artists to be incredibly kind and generous, to care about people regardless of their personal background. It changed me," she said.

In addition to her academic work in the Program in Dance, Strong is a member of Mas Flow Dance Company, which performs Latin dance. She is also active in the Princeton Hidden Minorities Council, a group for first-generation college students. 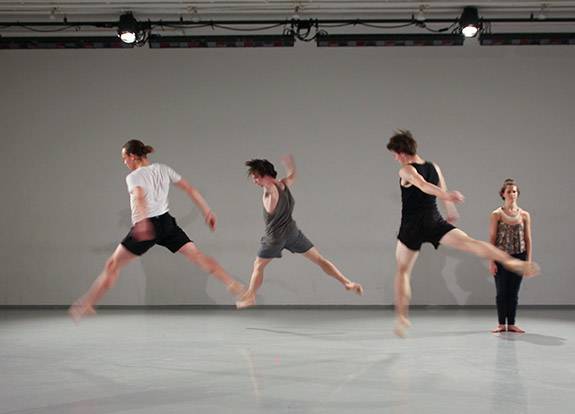 From molecular biology to choreography

After starting his studies at Princeton in molecular biology and changing majors several times, junior Bri White is now a concentrator in art and archaeology, program 2: studio arts — a major that combines visual arts and humanistic education and is offered in collaboration with the Lewis Center — and is also pursuing a certificate in dance to explore the intersections between these art forms.

White participated in Irish dance for 10 years in his hometown of Hilton Head, South Carolina, and did not explore classical ballet until he was a senior in high school. As a freshman at Princeton, he discovered the dance program, which, he says, "completely opened the world of dance to me."

"The program has been extremely supportive," said White. "Each student is offered instruction and opportunities that are individualized to their interests and abilities." He noted in particular the support he has received from Susan Marshall, the director of the dance program, and the opportunities to work with distinguished guest choreographers.

White will dance in "Angle of Incidence," a contemporary ballet by guest choreographer Jodie Gates, and "Lareigne," a complex and extremely physical work by Stephen Petronio. Gates' work is being staged by Jennifer Lott, a professional dancer and Gates' choreographic assistant. "Lareigne" is being staged by Ori Flomin, who danced with the Stephen Petronio Company for 13 years and stages his work internationally.

Last year, White was selected to participate in the Performance Lab, a new project of the dance program in which individual students are mentored by a faculty member to create a piece. White worked with Vandenbroucke to develop a new work that experimented with breaking the "fourth wall," the imaginary boundary between an audience and the performer. White, who intends to pursue a career as a performer and choreographer, said the Performance Lab helped to clarify the kind of work he is most interested in creating. 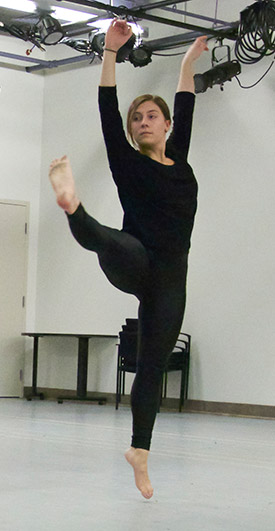 Studying dance without having to go to a conservatory

Sophomore Mica O'Brien of Washington, D.C., has been dancing since the first grade. In high school, she took a dance class on a visit to Princeton. She knew that she wanted to attend a university that offered a broad liberal arts education where she could continue in dance, rather than a conservatory program with a singular focus.

Arriving at Princeton, O'Brien joined the student dance group diSiac, which blends hip-hop, contemporary, lyrical dance and fusion styles. She intends to major in history or anthropology but said dance would continue to be a part of her life. Some of her closest friendships at Princeton have been forged through a shared interest in dance, she said.

O'Brien will perform in "Dabke," a fusion of contemporary and Middle Eastern folk dance by Zvi Gotheiner. Members of the choreographer's company, ZviDance, have assisted periodically throughout the rehearsal process.

A tale of two passions: Dance and computer science

Junior Glenna Yu's main reason for choosing Princeton was its dance program. She studied ballet from age 3 and her mother performs traditional Chinese folk dance. "I knew I could pursue a strong academic experience in computer science at Princeton, seriously continue my dance training and do it all in the context of the liberal arts," she said. "The dance program has exposed me to different styles of dance. There is a focus not just on technique but also on the varied ways that new work is created."

Yu, who is from Fairfax, Virginia, was also drawn to Princeton's dance community; in addition to her work in the dance program, she is a member of two student-run dance ensembles: Princeton University Ballet and BodyHype, which explores all forms of dance including hip-hop, modern, lyrical, contemporary, jazz, tap and breakdancing. 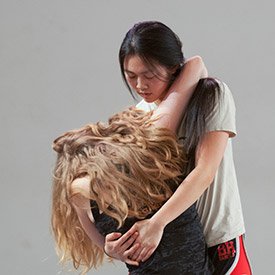 Junior Glenna Yu and a fellow cast member rehearse "Name by Name," a piece for 15 women choreographed by Susan Marshall, the director of the Program in Dance, and staged by Luke Miller. (Photo by Marcos Cisneros, Class of 2015)

She likens the study of dance to her major in computer science, saying that both are about problem solving — and she finds the physical exertion a welcome break from her other courses.

In the Spring Dance Festival, Yu will perform in "Lareigne," which she finds "technically challenging and nonstop, yet still exuding a kind of confident sensuality," and Marshall's "Name by Name," a piece for 15 women, which Yu describes as "forceful and demanding total commitment."

Yu also will perform in two senior thesis projects this spring. She has been accepted into this year's Performance Lab, where Vandenbroucke will mentor her in the creation of a new work that she hopes will lay the groundwork for her own senior thesis project next year. After graduation, Yu hopes to work as a software engineer in New York City where she can also remain active in dance.

Though pursuing different paths, these students are united in their love of dance and their desire to share this passion with an audience when the curtain rises on the Spring Dance Festival.