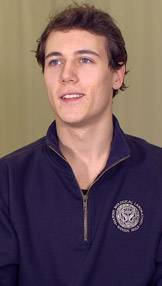 Princeton University junior Colby Hyland, above, is majoring in molecular biology and pursuing a certificate in dance. In this video, he talks about the relationship between his love of dance and how it relates to his academics.

Princeton University junior Colby Hyland fell in love with dance when he was 8 years old. He was participating in gymnastics when a ballet class required for cross-training inspired him to pursue dance instead. Now, 12 years later, the Massachusetts native is majoring in molecular biology and pursuing a certificate in dance.

Dance is an outlet where Hyland says he feels most confident and in his element.

"Dance for me …[is] just this different type of expression during the day that you really can't get anywhere else," Hyland said. "Especially here at Princeton, I've found that it's such a great outlet to really release and just kind of explore ideas or emotions."

Hyland's favorite style of dance is contemporary, which gives him the most freedom to explore or "improve" in the studio, but he said he doesn't limit himself to only one style. Hyland is a member and choreographer of two student dance groups, diSiac Dance Company and Princeton University Ballet.

"It seems like every semester you're kind of challenged with something completely different," Hyland said. "Even if it's contemporary dance, there's just such a wide array of actually what contemporary dance is."

Junior Colby Hyland dances and speaks about his experience with dance and academics at Princeton. (Video by Danielle Alio, Office of Communications)

Hyland is preparing for the Spring Dance Festival, which will take place Feb. 20-22 at the Berlind Theatre at McCarter Theatre Center. He is dancing in a piece by acclaimed choreographer Stephen Petronio consisting of nine student dancers. The piece is being staged by Ori Flomin, lecturer in dance and the Lewis Center for the Arts.

When asked how and if dance relates to his academics, Hyland acknowledged a relationship between the art form and molecular biology through patterning and signaling and how bodies move in space.

"I think the fundamental concepts of maybe movement and patterns and things like that could definitely be explored with dance," Hyland said.

After finishing his studies at Princeton, Hyland plans to focus on a professional dance career with medical school following soon after.

Flomin said many choreographers would love to work with Hyland.

"I would really love to see him [Hyland] become a professional because all of the ingredients are there for him," Flomin said. "I think he has so much potential."