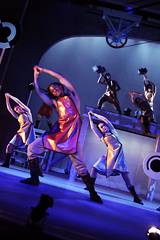 In connection with the performance, a new exhibition, "'Le Pas d'Acier' ('The Steel Step'): Re-Creating a Lost Ballet," is on display at the Milberg Gallery for the Graphic Arts in Firestone Library through Sept. 25.

The exhibition includes a model reconstruction of the ballet's set and photographs documenting the re-creation process, as well as photographs, children's books, costume designs and program covers from the period drawn from the holdings of the library's special collections.

Final rehearsals are under way for "Le Pas d'Acier" ("The Steel Step"), one of the great lost ballets of the 20th century, which will be performed at 8 p.m. Thursday through Saturday, April 7-9, at the Berlind Theatre.

Scholars from Princeton and other institutions have painstakingly re-created the choreography, costumes and elaborate mechanical set of the work by legendary Russian composer Sergei Prokofiev.

The ballet was written as a celebration of Soviet industrialization, but budget constraints and a change in choreographers led to a scaled-down version that mocked industrial development being performed in 1927. The Princeton production will render the ballet -- for the first time -- exactly the way Prokofiev intended it.

"This is essentially a world premiere because the ballet was never performed the way Prokofiev conceived it," said assistant professor of music Simon Morrison, the mastermind behind the project, which has consumed him for the last three years. 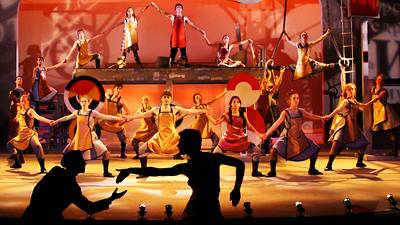 The full-scale ballet will feature 30 dancers and 60 musicians, all Princeton students, as well as a magnificent set and custom-made costumes. The visually spectacular set is a replica of the one that originally was planned for the ballet by Georgi Yakoulov. It is a stylized mechanical world of brightly colored spinning wheels, gears, levers and a rotating conveyor belt representing factory life. An eight-foot-tall replica of a train that emits steam from its funnel will come into view partway through the ballet.

The set was created with the help of theater historian Lesley-Anne Sayers, who spent eight years researching and creating models of the set. The ballet's choreography has been recreated using action cues and stage direction from the original musical score as well as drawings and photos discovered by Sayers in archives in Paris, London and Armenia. 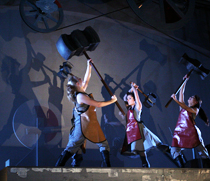 The costumes are being created by Ingrid Maurer, a New York City costume designer, using drawings and photographs from the 1927 production. The University Orchestra, under the direction of Michael Pratt, will perform Prokofiev's score.

The performances will open with several short pieces thematically related to the ballet, created by University composers and choreographers and others. Lazier has collaborated with Dan Trueman, assistant professor of music, on a piece called "Transparent Body," which will only be performed during the April 8 performance. Princeton theater and dance professor Ze'eva Cohen and music professors Paul Lansky and Barbara White have collaborated with outside artists on three other pieces titled "In the Moment," "Island" and "Repetition Compulsion."

A limited number of tickets are available; for information, call the McCarter box office at (609) 258-2787.