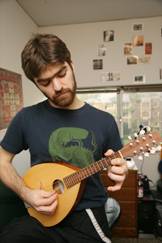 Princeton junior Hans Rinderknecht picks out a tune on the mandolin, one of his many varied interests. The physics major also has pursued the study of dance. He was selected as one of 30 student dancers for the world premiere of Sergei Prokofiev's "Le Pas d'Acier" on campus in 2005, and he spent part of the following year in Japan dancing and serving as a rehearsal assistant for a production of "The Rite of Spring." (Photo by John Jameson)

Below left: Rinderknecht (center) rehearsed for "The Rite of Spring," which was performed at the gala opening of the Hyogo Performing Arts Center in Kobe, Japan. With his background in modern dance, Rinderknecht said that the "claw-hand movements and turned-in, flat-footed stomping" of the Vaslav Nijinsky ballet were well-suited to his "eclectic training" and acrobatic abilities. (Photo courtesy of Hans Rinderknecht)

Hans Rinderknecht refuses to be pigeonholed. A physics major with an interest in cosmology, the Princeton junior also is fascinated with the study of dance, theater, music and languages. And he's found a way to combine these divergent pursuits into an extraordinary educational experience.

Rinderknecht's passion for the arts developed during high school in Shaker Heights, Ohio, where he performed in an acting and dance movement group and played several stringed instruments. He also spent six months in Germany, where he honed his language skills.

When he came to Princeton, Rinderknecht started dancing in earnest. He also pursued his academic interests in physics and math. He found that he could rely on the physical demands of dance to help him mentally work his way through long problem sets, and movement was a welcome break that also helped open up this thinking. Further, he discovered that principles of physics could be useful to the way a dancer thinks about movement.

In early 2005 Rinderknecht was selected as one of 30 student dancers for the world premiere of Sergei Prokofiev's "Le Pas d'Acier," which was performed to high acclaim at Berlind Theatre in April of that year.

Also during his sophomore year Rinderknecht began studying Japanese. At one rehearsal, Millicent Hodson, a ballet reconstructionist who worked on "Le Pas d'Acier" while at Princeton as a visiting fellow with the Humanities Council, saw him writing Japanese symbols with a brush pen. Rinderknecht's skill in dance and facility with the language prompted Hodson to offer him a remarkable opportunity — an invitation to audition for a role in her production of "The Rite of Spring," choreographed by Vaslav Nijinsky, later that year in Kobe, Japan. 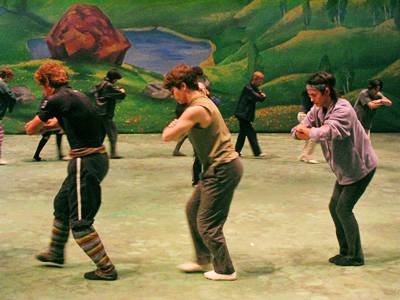 "Hans was an exceptional member of the 'Pas d'Acier' project, a fine performer, and quite gymnastic, all of which caught my eye early," said Hodson, who runs a dance and design partnership in London with Kenneth Archer, who also was involved in the Princeton and Kobe productions. "Even more, I saw in Hans a performer with a high awareness of others and a real sense of teamwork."

Though the invitation came by chance, Rinderknecht was ready for it. "I remember talking to my mom over the phone and saying, 'If the opportunity works out, I don't see any way for me not to do it.'"

By the end of his sophomore year, Rinderknecht's plans began to fall into place. He went to Ishikawa, Japan, for the summer of 2005 as a participant in an intensive language immersion program offered through Princeton in Asia. Living with a host family for eight weeks allowed him to become much more fluent in Japanese. Then, during a break in the program in July, he caught the bullet train to Kobe in order to audition — successfully — for a part in the Nijinsky ballet.

Taking a leave from Princeton for what would have been his junior year, Rinderknecht then went back to Ohio and enrolled in a classical ballet class. In October he returned to Japan — this time to Kobe — to prepare for his work as a dancer and rehearsal assistant in "The Rite of Spring."

The ballet was slated for two performances at the gala opening of the Hyogo Performing Arts Center in Kobe. As if the pressure of an important event were not enough, there was also a significant time crunch of only five weeks to rehearse. With a dance troupe largely comprised of amateurs, there was also the added complexity of working with dancers who had to shape schedules to fit job or school commitments.

In Kobe, Rinderkencht had two main responsibilities. First, he had to learn the ballet, along with the other 29 dancers. With his background in modern dance, Rinderknecht said that the "claw-hand movements and turned-in, flat-footed stomping" of the Nijinsky ballet were well-suited to his "eclectic training" and acrobatic abilities.

His second duty was to assist Hodson in communicating with the dancers, most of whom did not speak English. In rehearsals, Rinderknecht quickly found "physical communication" and the "language of dance" to be more effective than Japanese when relaying and practicing new choreography.

He also found the "language of science" helpful, such as when needing to figure out the best sequencing of dancers moving in unison during complicated parts of the ballet.

In an article he wrote about his experience in the January 2006 issue of Ballet Magazine, Rinderknecht noted: "At one point during Act Two, we needed to synchronize the rotation of two circles of seven people each; so I deconstructed the problem mathematically. I think it was at this point that I began to deeply appreciate Nijinsky's choreographic brilliance."

For Rinderknecht and his fellow dancers, spending six hours a day in rehearsal meant "getting to know each other through dance itself." On rare days when his schedule allowed, he explored Kobe and the surrounding countryside, and was taken aback by the beauty of the bamboo forests and the nearby mountains.

With so much work and intensity going into the ballet, Rinderknecht said that all of the dancers would have liked to perform more than twice, but the gala opening included productions besides theirs. Recalling the tears of the dancers after their last staging, he remembered how he felt that "the performance placed its own blessing on the theater," and that to put on Nijinsky's ballet with a Japanese cast was "mind-boggling, marvelous and beautiful."

Rinderknecht returned to the United States in late November 2005, and came back to Princeton in January 2006 to work on an innovative astrophysics project.

Working alongside graduate and undergraduate students in the lab of Lyman Page, the Henry De Wolf Smyth Professor of Physics, he helped prepare lenses for the Atacama Cosmology Telescope, which is being installed in Chile. The project is part of a multi-institution, multinational effort led by Princeton and funded by the National Science Foundation to provide students with opportunities to engage in leading-edge investigation within an international research environment.

"It was really great to get back into science, where there is a logic and a different way of thinking that is so interesting," said Rinderknecht.

Now re-enrolled at Princeton for his junior year, Rinderknecht continues to mix art with science. He is singing in the Chapel Choir and will play the mandolin for his roommate Yuhwon Lee's final music project in January. Recently, he acted as a horse in Theatre Intime's production of the Peter Shaffer play "Equus," a role he said was "grueling physically." He also will play Prospero in a senior thesis production by Ronee Penoi of Shakespeare's "The Tempest," and will perform in four pieces in the Spring Dance Festival Feb. 23-25. Two of the pieces are professionally choreographed — one by Ze'eva Cohen, head of dance, and another by Christopher Williams, an emerging dancer and choreographer. The other two are by students Jessica Baylan, in collaboration with Rinderknecht, and Sarah Outhwaite.

And other opportunities beckon for the near future: Rinderknecht is considering either going to Tokyo to teach English this summer, or pursuing an undergraduate fellowship in plasma physics and fusion energy sciences at the Princeton Plasma Physics Laboratory. "Being thrown into a new experience can be the best teacher of all," he said.