Dyane Harvey brings her own experience as a prominent modern dancer to her role as a lecturer in the Program in Theater and Dance and the Lewis Center for the Arts. Here she leads students through some moves during a session of "The American Dance Experience and Africanist Dance Practices," a studio course that explores how the evolution of American dance has been influenced by African American choreographers and dancers.

From the May 5, 2008, Princeton Weekly Bulletin

An African drumbeat filled the Hagan Dance Studio. "Reach up! Reach up!" instructor Dyane Harvey announced. Twenty-two students arrayed in rows before the mirrors stretched their arms to the ceiling to warm up.

Next the students dispersed to spots along either side of the room, and one student began singing an African chant. The others soon joined in, and their singing and clapping was accompanied by rhythmic stomps, head tosses, energetic leaps and shimmying shoulders.

This is "The American Dance Experience and Africanist Dance Practices," a studio course that introduces students to American dance aesthetics and practices while focusing on how the evolution of American dance has been influenced by African American choreographers and dancers. And it is two hours of exuberant, joyous movement.

"The most important thing I've learned from Dyane is to dance my heart out," said senior Rebecca Lee, a molecular biology major.

"The students physically learn the history of African dance and the way it has changed since we came to America," said Harvey, a lecturer in theater and dance and the Lewis Center for the Arts. "This is a place where I hope they feel safe and open. They can really let it all hang out."

In a recent class four male students performed a traditional African dance they had choreographed, which began when each dropped to the floor in a crouch, then leapt to their feet and started a series of moves that included more leaping, clapping and spinning, all performed with high energy and joy. 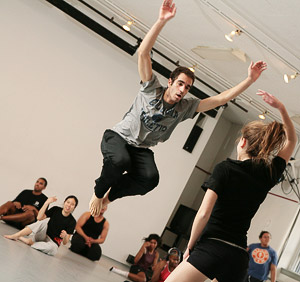 Senior Kit Tollerson takes to the air while performing a routine with sophomore Bridget Bartlett.

"Work it!" a student shouted in encouragement.

"I love that move!" said another.

After other groups performed, Harvey taught the students a new dance sequence.

"We need to play with scarves today," she told the class. The students tossed scarves under their kicking legs, behind their backs and over their heads.

"Are you ever upright in Africanist dance?" Harvey asked.

"Very rarely," Harvey agreed. Later, she told the students the dance they were learning could have been performed in Congo Square, a field outside the city walls of New Orleans where, in the mid-18th century, enslaved Africans were permitted to gather on Sundays. Why did slaves go there, she asked?

"You could only dance once a week," one student said.

"It became a tourist attraction," another said.

"They practiced a more public form of healing 'vodoun' in Congo Square," Harvey explained. "Something like these dances may have happened before a ritual or a greeting — a get-down and party moment." 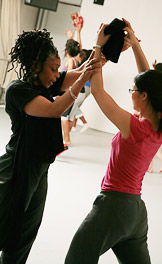 Harvey works with senior Rebecca Lee, who said the most important lesson she has taken from the course "is to dance my heart out."

Bringing a new kind of dance to Princeton

Ze'eva Cohen, Princeton's head of dance studies, chose Harvey to inaugurate an African dance class at Princeton because of her knowledge of the historical and cultural traditions of African dance. Harvey has long performed with the Forces of Nature Dance Theatre Company, which blends traditional West African dance with contemporary modern dance, along with elements of ballet, house, hip-hop and martial arts.

In the studio, Harvey helps students bring to life what they have read about the history of African dance.

"Dyane challenges her students to connect their ideas to their bodies," said Cohen, who has known Harvey since the 1970s, when both were prominent modern dancers in New York City. "They go from the known dance tradition to improvisation, and after that she gives them a chance to create their own dances."

Harvey has been dancing since the age of 4, when she saw a performance of "The Nutcracker" and decided, "I could do that," she said. At age 12 she became the first black dancer in the Schenectady (N.Y.) Civic Ballet Company. But after being introduced to modern dance in her late teens, she left ballet behind and won a scholarship to study at Modern Dance Artists, a company in New York City.

Her big break came when she was cast in "The Wiz," the 1975 Broadway musical that told the story of "The Wizard of Oz" featuring an all-black cast. Harvey was a swing, which meant she had to learn the parts of 10 chorus members and fill in when one of them was out sick or on vacation. She also was one of 150 dancers in the movie version of "The Wiz."

Harvey has appeared as a principal soloist with some of the most recognized theater and dance companies in the United States and abroad. Her choreography has been seen in many theatrical and dance projects, including "Great Men of Gospel" at the New Federal Theatre in New York City and the PBS special "Bones of Our Ancestors." 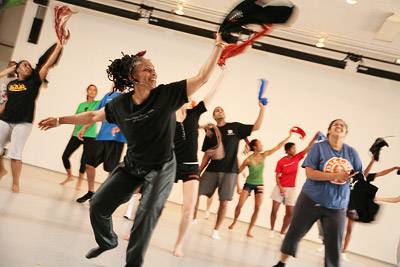 Harvey and her students use scarves to accentuate their movements as she teaches them a new Africanist dance sequence.

Harvey arrived at Princeton in 2001 and created "The American Dance Experience and Africanist Dance Practices" course in 2002. Word of mouth from those who have taken the course fills the roster and the waiting list quickly.

"I heard nothing but great reviews," said senior Zennen Clifton, a computer science major taking the class this semester. "It might be the best class I've taken here."

The course also draws students like senior Diana Bonaccorsi, an anthropology major who never thought she would take a dance class at Princeton.

The class "is a time to get in the moment," she said. "And Dyane incorporates the history of the moves as she demonstrates them."

The course also is listed in the Center for African American Studies, and it draws many students who may not have thought they were interested in dance. This semester the class is made up of students majoring in sociology, economics, English, chemical engineering, French and Italian, and psychology, among others. Harvey enjoys having students from all dancing backgrounds.

"I get them to let go of their intellect and move," she said.

Harvey values her students' enthusiasm and willingness to learn above technical perfection, said Lee, who is a member of the student dance group Triple 8.

"African dance, in particular, seems to thrive on the dancer's energy, and Dyane showed us that as long as we are passionately engaged, the audience will enjoy the show, no matter what," Lee said. "This confidence is really empowering, and I think I could have learned it only through taking Dyane's class."

"This is a place where I hope [students] feel safe and open," said Harvey, who complements the studio work in her course with readings, video viewings, guest speakers and dance studies.