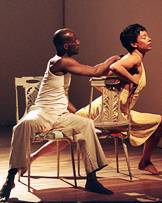 Among the works choreographed by Princeton dance faculty to be showcased at the Dec. 8-9 concerts is "She Loves Me" by Edisa Weeks. With her New York company Delirious, she will perform the dark comedy set to love songs by Patsy Cline and Martha Reeves and the Vandellas. Shown here with Weeks is Andrew Vaughn. Photo: Julie Lemberger

At left: The Pittsburgh-based Bodiography Contemporary Ballet will perform "Meditation on a Square" by Head of Dance Ze'eva Cohen. The work was inspired by sacred architecture, music and folk dances from her recent trip to Barcelona, Spain.

"New Dances: Princeton Faculty in Concert" will be the first faculty dance concert at the Berlind Theatre, which is part of the McCarter Theatre Center and opened in 2003.

Cohen's "Meditation on a Square," to be performed by Pittsburgh-based Bodiography Contemporary Ballet, was inspired by sacred architecture, music and folk dances from her recent trip to Barcelona, Spain.

Durham's company, Philadelphia-based Merge, will perform "Fragment of (Me)mory." Choreographed to music by Alexander Borodin, the dance draws a metaphor for memory as a physical event by juxtaposing precise physicality with alternative light sources to illuminate and obscure the dancers.

Harvey integrates text and music in her danced portrayal of Sechita's dreams from Ntozake Shange's "For Colored Girls Who Have Considered Suicide When the Rainbow Is Enuf," representing a woman's journey to self-acceptance.

Lazier’s Brooklyn-based Terrain will perform the premiere of "Serenade." Choreographed to Pyotr Tchaikovsky's score of the same name, the dance is the story of being attracted to and repelled by the romantic music and finds five dancers soaring, crashing and embracing stillness as the dance unfolds. 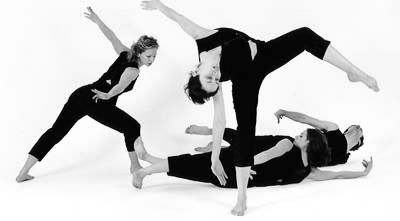 Weeks will perform "She Loves Me" with her New York company Delirious. The work, set to love songs by Patsy Cline and Martha Reeves and the Vandellas, is a dark comedy that, in the tradition of "Medea" and "Beloved," seeks to understand the painful psychology of infanticide.

Tickets are $15 for general admission and $10 for students and seniors, and are available through the McCarter box office at (609) 258-2787 or www.mccarter.org.