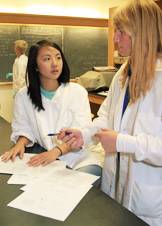 Research associate Priscilla Purnick (right) consults with Justine Chiu, a junior at Montville Township (N.J.) High School who is one of two high school students in the iGEM program this summer. 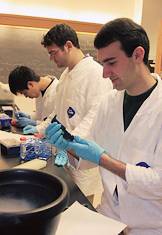 Princeton sophomore Robbie Loughlin (right) sets up a micropippete, used for transferring DNA. His lab mates are junior Andrew Sichel (center) and sophomore Wei Ho. Below left: Princeton senior Ritu Kamal and junior Sanjiv Goli (foreground) prepare to extract some DNA. Behind them, research associate Priscilla Purnick assists senior Safiyy Momen in setting up a special gel that sorts DNA by size; Oly Khowash, who will be a junior at Manalapan (N.J.) High School, looks on.

Clusters of students gathered in Princeton's Lewis Thomas Lab on a recent Friday for a trouble-shooting session before heading to their benches for another attempt at something few labs in the world can do: transforming mouse stem cells into muscle cells.

The students are part of the International Genetically Engineered Machines (iGEM) program, a friendly competition between teams on 38 campuses to see who can engineer the best biological systems with DNA. The Princeton team consists of eight Princeton undergraduates, three students from other universities and two high school students.

Ritu Kamal, a senior in electrical engineering at Princeton, explained that the group's goal at the end of its 10 weeks together this summer is to create the equivalent of an electrical circuit with a switch, except that the circuit uses DNA instead of electronics and operates only when enough stem cells have evolved into muscle cells.

"It's called quorum sensing," she said. "The [original stem] cells will be green, and the muscle cells will turn red, but only when they reach a certain density."

The students are working in a new field called synthetic biology. The idea is to create "bio-bricks" -- bits of DNA-powered circuits -- that are modular and that could one day be fitted together to manufacture such miracles as new pancreatic cells for people with diabetes or special patches that mend broken spinal cords.

The iGEM lab is run by Ron Weiss, assistant professor of electrical engineering, and Ihor Lemischka, professor of molecular biology. The work that the undergraduates are performing parallels the professors' own research collaboration.

Lemischka said the collaboration between the two fields is a natural one.

"In the larger sense, biology is impacted upon by engineering disciplines a lot," he said. "Biology ultimately will look a lot more like engineering than like physics or chemistry. The main difference [between the two fields] is that engineers build stuff by design while in biology stuff is built through evolution."

Weiss and Lemischka have impressed upon the students that they are present at the dawning of a new age. As undergraduates (or high school students), they can potentially make real contributions to a new technology that could ultimately be as socially transformative as, for example, the computer.

"Since I come from a computer science background, the analogy I like to draw is that it's like being around in the early days of [the room-size computers like] the ENIAC," said Weiss, who co-wrote a June cover story in Scientific American on synthetic biology.

Robbie Loughlin, a Princeton sophomore in electrical engineering, said it was exciting to be elbow-deep in cutting edge research. "It is an ego booster," he said. "It really feels like we are working on something important."

At the beginning, the 13 students -- many of whom had taken only a high school biology class -- attended daily lectures in biology. But by the second day of the program, they were working in the lab.

Purnick's background underscores the interdisciplinary nature of the work. Although she works in Weiss' lab in electrical engineering, she is a classically trained biologist with a Ph.D. in neuroscience. When she is not supervising iGEM this summer, she is pursuing her research in the Weiss lab on cell-cell communication and developing three-dimensional growth of embryonic stem cells.

In addition to Purnick, the other instructors are postdoctoral researchers Sairam Subramanian, Christoph Schaniel and Ernesto Andrianantoandro.

Stephan Riutta, a biomedical engineering major at Michigan Technological University, said he was intrigued by the idea of bio-bricks.

"I like the bottom-up approach -- standing at the cellular level and building up from there," said Riutta.

Of the 38 schools participating, Princeton is the only iGEM team to be taking the ambitious step of programming mammalian stem cells; the others are working with more basic bacterial or yeast cells. All the teams will present their research in November at the annual "iGEM Jamboree" at the Massachusetts Institute of Technology.

The Princeton iGEM program is sponsored by the Princeton Institute for the Science and Technology of Materials, the Center for Innovation in Engineering Education, the provost's office, and the departments of electrical engineering and molecular biology.

The program already has funding for next year, and Weiss and Lemischka will begin reviewing applications for next summer in January.

Weiss said he was hopeful that this year's students would realize at least their basic goal of getting a quorum of muscle cells to differentiate. In fact, he believes that there is a good chance that the students' research might result in a published scientific paper.

Kamal's expectations were more tempered. "This is biology -- it's a trial and error process," she said. "Let's just say that we're hoping for some positive results."