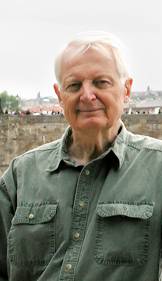 Dudley Saville, a chemical engineer whose research and teaching transcended his specialty and inspired advances and leaders in many fields, died Wednesday, Oct. 4, at age 73. The cause was cancer.

Saville, the Stephen C. Macaleer '63 Professor in Engineering and Applied Science, was a pioneer in the fields of fluid mechanics and colloid science. His work revealed fundamental principles governing the behavior of fluids and colloids, which are very small particles suspended in a fluid. His highly cited research formed the basis of many subsequent applications in areas ranging from the production of high-performance fibers to inkjet printing.

"He was, first of all, a wonderful human being," said Pablo Debenedetti, a longtime colleague and former chair of the Department of Chemical Engineering. "He had absolutely impeccable standards of integrity and honesty. The values of friendship, collegiality and sharing in the teaching enterprise -- these all made him central to the work of the chemical engineering department."

A former Ph.D. student, Charles Zukoski, now vice provost for research at the University of Illinois, recalled Saville as a "superb mentor."

"He could be very warm and caring. On the other hand, he was a real taskmaster," Zukoski said. "He could engage with people at a very personal level but also hold them to very high standards, and do one without damaging the other."

His sometimes gruff demeanor disappeared and Saville "melted" when he spoke of his family and particularly his grandson, Aidan, colleagues said.

Saville served as adviser to 25 Ph.D. students and routinely taught the department's core undergraduate courses in fluid mechanics and thermodynamics. "He was a pillar of our teaching program," Debenedetti said. His students have gone on to careers in academia as well as in different industries, including pharmaceuticals, specialty chemicals, materials and telecommunications.

He earned tenure at Princeton just three years later on the strength of several seminal papers he produced as sole author. "He was a person driven strictly by curiosity," said Ilhan Aksay, a professor of chemical engineering who later came to Princeton and developed a longstanding collaboration with Saville.

Among those early results was a paper that described the exact conditions required for an electrically controlled jet of fluid to maintain stability. The paper continues to be referenced today and the phenomenon that it explains is in widespread use in medicine, in the production of polyimides, which are very strong and heat-resistant polymer materials, and in electrically controlled spray painting.

Saville went on to become a leader in the science of colloids. In 1989, he published a major text in the field, "Colloidal Dispersions," with Princeton colleagues William Russel, now dean of the Graduate School, and William Schowalter, professor emeritus of chemical engineering. Among many applications of colloid science is the important field of protein separations in which protein molecules are isolated individually from a complex mixture.

In the 1980s and 1990s Saville led a series of experiments that were conducted by astronauts aboard the space shuttles.

In 1992, Saville struck up a collaboration with Aksay, whose expertise as an experimentalist complemented Saville's strengths as a theorist. "It was a great pairing," said Debenedetti. "The work they did together was much more than the sum of their parts."

Zukoski said that the collaboration seemed unlikely at first, but lasted until Saville's death. "Out of that came the most amazing things. They had a series of just stunning papers," he said.

Saville and Aksay developed methods for controlling the behavior of colloids, coaxing them to arrange themselves in precise and minute patterns on surfaces. Such nanopatterned surfaces are of particular importance in creating materials that manipulate the transmission of light, which is key to fiber-optic telecommunications.

In recent years, Saville received major recognition for his work. Princeton named him to the Macaleer chair in 2001 and, in 2003, he was elected to the National Academy of Engineering, the highest professional recognition for an engineer. At a symposium held in honor of his lifetime achievements in 2003, colleagues described his work as "invariably characterized by deep physical insight and formal elegance."

Saville is survived by his wife, Joy Saville, of Princeton; his sister, Harriet Potter, of Lincoln, Neb.; his son and daughter-in-law, Alex Saville and Amy Jacob, of Highland Park, N.J.; his daughter and son-in-law, Andrea White and Stephen White, of Princeton, and their son, Aidan Saville White.

A memorial service is scheduled for 4:30 p.m. Sunday, Oct. 8, at Nassau Presbyterian Church in Princeton following a private burial. In lieu of flowers, donations may be made in his memory to: the Crisis Ministry of Princeton and Trenton, 61 Nassau St., Princeton, NJ 08540; or the American Cancer Society, P.O. Box 22718, Oklahoma City, OK 73123-1718.

From Quonset huts to dancers: Scientists solve a nanotech mystery