Professor of Chemistry Michael Hecht talks at a dinner hosted by Rockefeller College for freshmen and sophomores who wanted to learn more about majoring in the department. Working with the Office of the Dean of the College and the academic departments, the residential colleges are sponsoring numerous events that allow underclassmen to interact with faculty, graduate students, upperclassmen and alumni as they explore the range of intellectual opportunities available at Princeton. (Photo: John Jameson)

At left: The "Major Choices" events include a variety of cultural excursions, including a recent trip to the Cloisters museum in New York City, where prospective majors in the Department of French and Italian along with three faculty members received a guided tour of the medieval art and architecture collections. (Photo: Volker Schröder)

The redistribution of concentrators initiative has led more Princeton students to choose majors in traditionally smaller departments. Comparing the average number of concentrators in the classes of 2005 and 2006 (the last two classes before the initiative began) with the classes of 2007 and 2008, departments with the largest percentage gains include:   • Comparative literature, classics, and Slavic languages and literatures (60 percent or more) • Philosophy (more than 40 percent) • Art and archaeology, chemical engineering, chemistry, French and Italian, and religion (more than 30 percent) • Astrophysics, psychology and music (more than 20 percent)

Below left: During the dinner with prospective chemistry majors, senior Claire Filloux (right) discusses her experiences as a concentrator in the department. (Photo: John Jameson)

From the April 2, 2007, Princeton Weekly Bulletin

From dinner discussions with faculty in numerous disciplines to cultural excursions to New York City museums and ethnic neighborhoods, freshmen and sophomores are benefiting from a greater array of perspectives as they shape their courses of study at Princeton.

Each spring the residential colleges sponsor a diverse menu of on- and off-campus events aimed at exposing students to the full range of academic departments available at the University. The events are part of ongoing efforts to encourage undergraduates to pursue a broader range of intellectual opportunities by considering majors in traditionally smaller departments.

For more than three years, the Office of the Dean of the College has been working with academic departments, the residential colleges and the Office of Career Services to encourage students to pursue their intellectual passions, an initiative known as the redistribution of concentrators or "Major Choices." As a result, more students are opting to concentrate in smaller departments (see sidebar), particularly in the humanities and natural sciences, as the effort's core message -- "study what you love" -- has been communicated more widely. 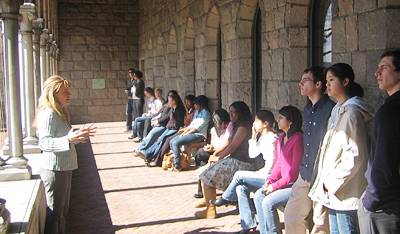 "I'm interested in having students think as broadly and imaginatively as possible about their range of possibilities," said Dean of the College Nancy Malkiel, who oversees the redistribution initiative, which also includes funding for departments to strengthen introductory courses or initiate new courses. "I'm convinced that when they do that, with the strong encouragement to study what they love and with departments having refreshed their introductory programs of study, more students will pick some of the smaller departments. Faculty in the smaller departments are pleased where they have succeeded and eager to keep imagining ways of doing better."

Malkiel stressed that the effort is not intended to dissuade students who are passionate about majoring in traditionally larger departments such as economics, politics, history and the Woodrow Wilson School of Public and International Affairs.

Senior Emily Stolzenberg, a German major who is interested in pursuing a career in law, said, "At the time that I picked my department, I wasn't sure exactly what I wanted to do, but I knew that the German department would give me the flexibility and support to pursue my interests. … My future plans aren't set in stone, either, but I'm sure that the wide-ranging education I've received will help me in the future, whatever it may bring."

In the German department, Stolzenberg said, "The faculty members' interests are diverse, and they encourage us to follow our own interests. Mine have branched out as a result. I took a class on the Weimar period and got really excited about art, and this fall I began a film research project that I'm hoping to eventually publish as a journal article." 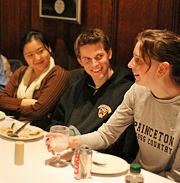 In organizing their "Major Choices" events, the residential colleges recognize that students are grappling with many issues in trying to select a major, said Rockefeller College Dean Oliver Avens, who oversees the efforts of the colleges' directors of studies to organize and advertise the events.

"We want to create events that address not just the substance of the major but also students' questions: Where do I go with this major? What will other people think if I have this kind of major? What kind of people major in this?" Avens said. "Sometimes simply meeting people who are classics majors on a bowling night can be a helpful thing."

From February through April, the colleges sponsor several dozen events for sophomores, who are due to select their concentrations by early May, and freshmen, who may want to learn more about a field in which they are taking classes already or to get an introduction to a new discipline. The events allow students to explore various departments by meeting with faculty and graduate students in more informal settings, often over dinner or tea. Underclassmen also gain valuable insights by talking with juniors and seniors about their experiences in choosing a concentration.

"We never have a hard time getting upperclassmen to come back and talk about their majors," said Rebecca Graves-Bayazitoglu, director of studies at Rockefeller College. "They address a lot of concerns that may not be necessarily apparent to us, and they're often very reflective about their decision. Those discussions are a very useful part of what we do."

Students also can attend film screenings and panel discussions, tour laboratories and art studios, meet with alumni to discuss academic and career opportunities, or enjoy cultural trips to New York City and other areas. Among more recent excursions, prospective French and Italian majors have toured medieval art and architecture collections at the Cloisters, potential East Asian studies concentrators have celebrated the Chinese New Year in Chinatown, and students interested in religion have visited churches and mosques in Harlem.

On the Cloisters trip, 18 students were joined by French and Italian faculty members Sarah Kay, François Rigolot and Volker Schröder. The group took a two-hour guided tour of the museum and then dined at a French restaurant in Manhattan.

"I wanted to go on the trip to further my experience with French culture and history," said sophomore Shekida Smith, who is planning to major in French and Italian. "I thought the trip was well organized, and the faculty members who attended were delightful to interact with in such a comfortable setting."

Schröder, the French and Italian departmental representative, noted that the number of majors has risen from 10 in 2001-02 to 19 this year as its outreach initiatives have increased. Other events that were well-received included a trip to the New York Metropolitan Opera to see "Rigoletto" and a panel presentation of senior thesis projects, Schröder said.

At a time when the sciences are growing increasingly interdependent, Hecht said he stressed to the students that chemistry offers opportunities "to do many different kinds of science. If you're looking at the world on the molecular level, it's chemistry. It's not just your grandfather's chemistry -- anything from materials science to the energy crisis to Alzheimer's disease is about chemistry."

Hecht said that, in three years of participating in "Major Choices" programming in the residential colleges, this year's dinner drew the biggest crowd. "The freshmen and sophomores had an opportunity to talk to me or to Kirsten or to the seniors, so there was a lot of one-on-one interaction," he said.

For the "Major Choices" events, each residential college is affiliated with a small group of departments. Forbes College, for example, is working with language departments this year and has focused in the past on the sciences. In seeking to attract students interested in both the sciences and humanities, Forbes last year hosted events that addressed the intersection between religious belief and scientific inquiry, with talks from faculty in disciplines such as astrophysics, plasma physics and philosophy.

"These events drew a number of students who were eager to discuss the tone in precepts and on campus in terms of what kinds of things they felt uncomfortable or difficult to discuss about science from their own personal religious beliefs," said Patrick Caddeau, director of studies at Forbes. "It gave them an opportunity to process the level of discussion that is going on in precept and in lecture, but in a more informal setting."

Now focusing on language departments, Caddeau is working to help alleviate a common worry that such majors are not practical from a career perspective. "The case I try to make with students is that if you graduate as an East Asian studies major or a French and Italian major with a thesis that clearly reflects your interests, you'll be able to say you've worked closely with a faculty member on primary materials in a foreign language and can bring a global perspective to your work. This type of experience makes for strong letters of recommendation that convey you have a clear sense of focus. These are all things that will make you a strong a candidate for positions in whatever field or career you're looking at," he said.

For senior Pam Walsh, the path to choosing a major went through several departments before she selected geosciences, where she has found intellectual fulfillment and career prospects.

"I came to Princeton with no clear idea in mind of what I wanted to study here, other than a slight leaning toward the sciences and a desire to explore academic options which I hadn't had the opportunity to experience in high school. My freshman year course of studies was designed to do exactly that, including courses in economics, philosophy, music theory and a freshman seminar in oceanography," Walsh said. That seminar ultimately led to a major in geosciences, which then resulted in her taking a position after graduation with Schlumberger Oilfield Services, where she will work at sea and in a lab mapping potential oil and gas reservoirs.

"I love that geosciences incorporates chemistry, physics and biology, and you have an opportunity to learn about so many different things. Furthermore, I was excited about the chance to do research on tangible things -- the Earth around me -- and the opportunity to really explore the world around me in so many different ways," Walsh said. "I guess I found a true academic passion."