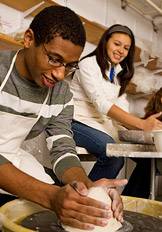 As part of the University's transition to the four-year residential college system, students are encouraged to generate events and activities that appeal to their peers inside and outside of their own colleges. The Wilson College art studio was launched in 2007 by students who were inspired to develop a creative venue out of an unused space in Wilcox Hall. The transition began in 2007 with the completion of Princeton's Whitman College and has reached its final phase this fall with the completion of the new Butler College dorms. (Photo: Brian Wilson)

With the opening of the new Butler College facilities this fall, the final pieces in the reshaping of Princeton's residential college program are now in place.

The University launched its four-year residential college program in 2007 when Whitman College debuted as the sixth residential college. For the previous 25 years, the five residential colleges housed only freshmen and sophomores. The new system was designed to enable undergraduates from all four classes and graduate students to reside in the colleges to more closely share their Princeton experiences.

The four-year college program has succeeded in providing a variety of residential, social and dining options that have proven popular with students, while enhancing their academic experiences through a new advising structure and learning spaces in the colleges. Each of three four-year colleges is paired with a two-year college. But the transition was not complete until this fall with the opening of five newly constructed dormitory buildings at Butler, a four-year college, and renovated dining facilities shared with Wilson College, its two-year partner.

"Now that we have all three four-year colleges up and running, we will be able more fully to realize our aspirations for the residential college system," said Dean of the College Nancy Malkiel. Whitman and Mathey are the other four-year colleges, paired with Forbes and Rockefeller, respectively.

"The colleges provide venues where undergraduates, graduate students, faculty and staff can interact around common interests and pursuits, including intramural sports, discussion groups, performances -- all of the activities that a diverse, multifaceted community can generate," said Malkiel, who has overseen planning for the programming and physical spaces in the colleges with Executive Vice President Mark Burstein and Vice President for Campus Life Janet Dickerson.

Senior Carrie Carpenter, president of the Butler College Council, said that while she has many friends who live in independent upperclass dormitories, "if you live up campus you don't get to see the freshmen and sophomores as often, and they have unique perspectives that I want to learn from. I wanted to stay in a residential college so I could meet them and participate in activities with them."

The design of this dining hall in Princeton's Whitman College and renovations in other dining facilities were intended to diminish the institutional feel of the residential college dining experience. (Photo: Brian Wilson)

Students also have shown an appetite for the flexible dining options created in the new system. Upperclass residents can take all or some meals in the colleges, no matter where they reside, or they can share meal plans with the independent eating clubs. The University also has provided financial aid to help cover eating club contracts and made available two free meals per week in the colleges for all juniors and seniors. This year, as with the two previous years, approximately 30 percent of all juniors and seniors living in four-year colleges are eating club members on shared meal plans.

"Rising juniors and seniors are choosing every option -- the ones that the eating clubs have provided for over 100 years, ones we have provided for many years and some that are new," Burstein said. "Certain undergraduates are passionate about each of those choices."

Students have responded well to renovations in the college dining facilities that were intended to diminish their institutional feel in favor of more distinctive, welcoming settings and to improve the quality of the food. A new combined servery for Butler's Wu Hall and Wilson's Wilcox Hall opened this month, marking the final phase of this project.

Burstein noted that, in addition to college and eating club options, demand has been strong for independent upperclass dormitories and student-run dining co-operatives. A new international-themed co-op is starting this year in 1901 Hall, adding to existing co-ops in Brown Hall and 2 Dickinson St., each with about 25 members.

"If our goal has been to create equity of experience for all undergraduate students at Princeton, the fact that each option is being chosen passionately is a sign that the changes have provided a new environment that fits with students' needs," he said. "We have received many positive responses about the flexibility of the system."

Carpenter said she purchased a smaller meal contract at Butler, which meets her needs when combined with the two free meals available to upperclass students in the colleges and opportunities to join friends for occasional guest meals at the eating clubs.

"I find it to be the best of both worlds, where I'm paying for a smaller meal plan but I get to experience the 'Street' as well as the community in the college," she said.

Dickerson said she has received encouraging feedback from students who appreciate having dining and social options on and off Prospect Avenue, where the eating clubs are located.

"We have intentionally enhanced opportunities for interaction among students of all backgrounds with the addition of two appealing options on the 'Street' as well," she said. "With the opening of Campus Club, a former eating club now designated as a student gathering space, and 58 Prospect, home of the Fields Center and Community House, we have newly transformed and inclusive spaces that are complementary to the residential college program." 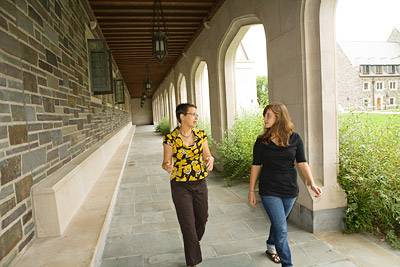 In the transition to the four-year college system college deans and directors of studies were given responsibility for nondepartmental academic advising of all juniors and seniors, which had been handled by deans the Office of the Dean of the College. College-based advisers such as Princeton's Whitman College Dean Rebecca Graves-Bayazitoglu (left, with junior Melissa Ilardo) now are able to maintain a relationship with students through all four years at Princeton, which benefits both the students and advisers. (Photo: Denise Applewhite)

A major element of the transition to the four-year college system was to enhance academic support for undergraduates, notably through changes in the advising structure.

Juniors and seniors now see their residential college deans and directors of studies for nondepartmental academic advising, which previously had been handled by a junior class dean and senior class dean in the Office of the Dean of the College.

"I primarily advise juniors and seniors, so as of this year I am working with students whom I met as freshmen in Whitman's inaugural year," said Rebecca Graves-Bayazitoglu, dean of Whitman College. "The breadth and depth of that relationship help me be a better adviser, which is very exciting for me."

Kathleen Crown, director of studies in Mathey College, said, "We get real pleasure from being able to congratulate a student whose progress we have followed for four years. The advantage of the advising continuity is especially evident when a junior or senior encounters difficulty and we are able to offer help that is informed by a sense of that student's personal and academic history. We also hope that juniors and seniors will feel more comfortable seeking help from advisers whom they have known for years."

Students also benefit academically from the presence of upperclass and graduate students who can consult with their younger peers. Graves-Bayazitoglu said Whitman has had "an incredibly deep pool" of graduate students applying to live in the college. The resident graduate students have organized dinner discussions, language tables, talks about their fields of expertise and even an effort called "Random Acts of Kindness for Seniors" to provide food and other support for students working on their theses.

"They're important members of our community. They organize and attend a host of different events, and have developed friendships and mentoring relationships with the undergraduate students around them," Graves-Bayazitoglu said.

More formal academic connections are made in the colleges as well through freshman seminars and other courses taught in the colleges and through the Princeton Writing Program, which is based in Whitman. "Having formal academic work occurring in these spaces says there isn't a major divide between the life of the mind and everything else -- it's all interrelated," Malkiel said. 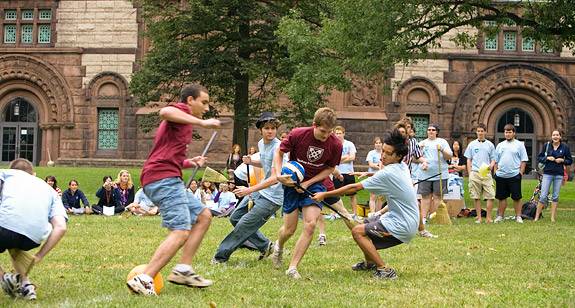 Students exhibited their college pride as Mathey residents (in red) squared off with Butler residents in a Quidditch tournament, playing a modified version of the flying-broomstick sport from the "Harry Potter" book series. (Photo: Brian Wilson)

Another key aspect of the four-year college system is the establishment of signature events in the colleges that help each develop a distinct personality. Examples include the BlackBox dance club in Wilson, the sustainable garden outside Forbes, digital artmaking in Rockefeller and "Open Mic Night" in Butler. Supporting these and other community-building efforts are the directors of student life in each college, new positions created two years ago as part of the four-year system.

The directors of student life work with college residents to promote a strong sense of community and help them make the best use of nonacademic resources. Each serves as the college's primary liasion to other campus life offices.

Michael Olin, director of student life at Wilson, said the BlackBox club has been successful because it is a student-driven effort with broad appeal. "It's not just Wilson students who are running the BlackBox -- they're students from all across campus and the space here in Wilson is just a conduit for their creativity. That's one of the ideas behind the signature events -- to bring in students from all across the University to have fun in the space."

Olin also cited the Wilson art studio -- created in 2007 in an unused space in Wilcox Hall -- as another popular student-generated initiative. "Luckily there are enough students in Wilson and in all the residential colleges who are motivated enough to think creatively and think outside the box to propose ideas," he said. 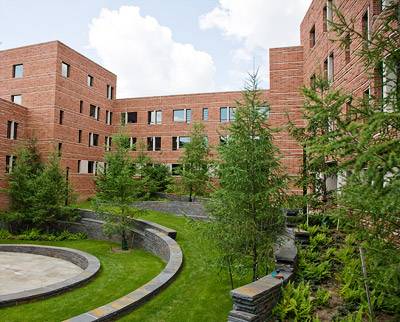 The Butler College Memorial Courtyard features an amphitheater that is designed to be a welcoming venue for performances and other student-run activities. (Photo: Brian Wilson)

Sanjeev Kulkarni, a professor of electrical engineering and master of Butler College, said that in addition to the college's popular "Open Mic Night," he anticipates that students will find creative uses for the new common spaces such as art and photo exhibitions, displays of academic work and performances. He is excited about Butler's first full year of operation with new and improved facilities, after two years of work to demolish five old dormitories and replace them with more contemporary buildings.

"There is always learning and fine-tuning to do, and I'm sure we will have some of that as we grow into the new space and figure out what programs work well," he said. "This has been a wonderful time to be a college master and a great time in particular to be at Butler."