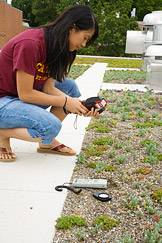 In University-led studies to be conducted over the next few years, faculty and students from the Princeton Environmental Institute will learn just how much energy can be conserved and stormwater runoff reduced by comparing green features with conventional ones at the redeveloped Butler College complex. Here, rising senior Jessica Hsu checks a reading on one of the Butler green roofs. (Photo: Denise Applewhite)

View a video on the Butler green roof study. 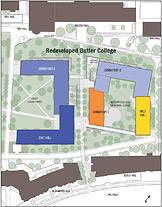 A site plan (larger image) of Butler College shows how the structures are arranged around the two courtyards. 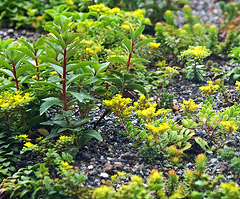 Roofs on more than half of the Butler buildings have been planted with 14 varieties of hardy sedum. The contrasts in the palette of the many-hued rooftop garden will intensify as summer turns to fall. (Photo: Denise Applewhite)

At the moment, the roof above Dormitory A of the redeveloped Butler College complex is a "green" roof only in the most technical sense of the phrase.

The 14 varieties of hardy sedum planted on the Butler rooftop earlier this year have now exploded into a kaleidoscope of color. The contrasts in the palette of the many-hued rooftop garden are only expected to intensify as summer turns to fall.

When 283 Princeton undergraduates move into Butler College this September, they will be entering a 113,000-square-foot complex integrating sustainability features from top to bottom, including the green roofs on more than half of its buildings and a stormwater cistern that will collect and recycle rainwater to irrigate courtyard landscaping.

"Green roofs provide many ecological and aesthetic benefits, from cooling the roof surface, to helping ease the urban heat-island effect, and creating a wildlife habitat," said rising Princeton University senior Jessica Hsu, a civil and environmental engineering major. This summer, she compared temperatures of green and conventional roofs across campus using infrared technology as a Princeton Environmental Institute (PEI) summer intern, along with faculty mentor, Eileen Zerba, a senior lecturer in ecology and evolutionary biology and director of undergraduate laboratories at PEI. 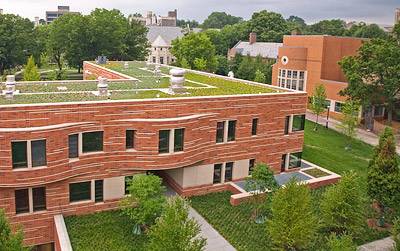 The green roof on Dormitory A is viewed here from Dormitory D. (Photo: Brian Wilson)

Hsu well appreciates the beauty of Butler's green roofs. As she surveyed the scene on a recent afternoon, she thought also of the slew of hidden sensors that Zerba, staff and other students from PEI had installed the previous summer.

The integrated monitoring system of sensors within roof layers, Zerba pointed out, was designed to compare energy performance and stormwater runoff of green and conventional roofs. It also makes the roof complex a living laboratory by feeding data through an Ethernet connection to computers on the ground for processing and storage. In University-led studies to be conducted over the next few years, researchers will learn just how much energy can be conserved and stormwater runoff reduced by comparing green features with conventional ones at Butler.

"It's so exciting to be part of a project like this where we are going to learn so much," Hsu said. "This will help guide us to take real measures to help the environment." 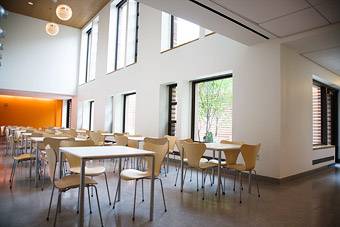 Much of the interior space is illuminated by natural light, including this seating area on the lower level of Dormitory A. (Photo: Brian Wilson)

The building, designed by Henry Cobb of Pei Cobb Freed & Partners of New York, is green outside and in -- its external envelope is 30 percent more energy efficient than construction codes require, and much of its interior space is illuminated by natural light.

"The design of Butler College meshes perfectly with the University's objectives to balance sustainable growth with needed expansion," said Mark Burstein, the University's executive vice president. "Not only does this newly constructed college tie a quadrant of the campus together, but the collaboration between the building architect and the landscape architect has set a new standard for Princeton."

Hsu and Eileen Zerba, a senior lecturer in ecology and evolutionary biology and director of undergraduate laboratories at PEI, check the sensors on a mockup model located on top of a Butler green roof. (Photo: Denise Applewhite)

Green roofs have been installed atop portions of Butler's dormitories A, C and D, with the monitoring equipment, including a weather station, on A. Green roofs -- also called vegetated roof covers -- are thin layers of living plants that are established on top of conventional roofs. Properly designed, they are stable, living ecosystems that replicate many of the processes found in nature.

While the roofs on the structures were being set up last summer, faculty and students from PEI installed instruments to measure heat flux, soil moisture and temperature. The crew included Stephanie Hill of the class of 2010 and Reid Fritz and Megan Prier of the class of 2011. The measurements will provide the basis for research on stormwater runoff -- how the quantity and quality of the water coming off the green roofs might improve the water quality and ecological balance across the University, in Lake Carnegie and throughout the local watershed. 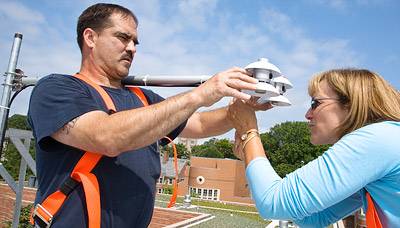 The data they collect, coupled to mathematical models, also will help determine how energy efficient the green roofs are and provide information for retrofitting and construction of future roofs. "What's wonderful about this design is that we will be able to fully quantify and analyze benefits of green roofs," said Zerba, the principal investigator on the project.

Weather readings and building measurements will be logged continuously. Real-time data, including infrared measurements contrasting the surface temperatures of the green and conventional roofs, will be transmitted and displayed on a new website that is under development. While only faculty and facilities staff trained in safety precautions are allowed to maintain equipment on the roof, the data will be available for many to use in their teaching and research.

The fact that the building's very structure offers unique learning opportunities, Burstein said, is a perfect embodiment of the goals of the University's residential college system.

"The residential college system attempts to enhance both the undergraduate living and learning experience at Princeton," Burstein said. "The new Butler College will play a vital role in enriching the University's intellectual life." 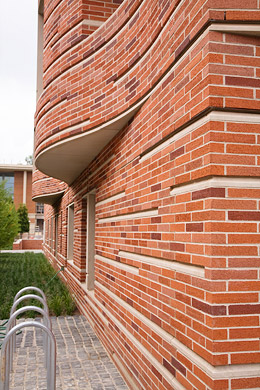 The five contemporary two- to four-story dormitories, which are connected below grade on the lower level, are adorned with warm red brick accented with limestone. Architect Henry Cobb said he purposely sought to enliven the architecture through the narrow bands of limestone as well as the irregularly spaced wave-like undulations on the buildings' fronts that allow for larger bedrooms in upper-class suites. (Photo: Brian Wilson)

And beauty is also a key part of the equation. The five contemporary two- to four-story dormitories, constructed on the site of the old Butler College residences, are adorned with warm red brick accented with limestone.

"Harry Cobb has done a beautiful job with the new Butler dorms," University Architect Ron McCoy has said. "This is an intimate ensemble of contemporary buildings that are thoroughly integrated into the spatial rhythms, forms and textures of the traditional campus. The buildings definitely reflect the maturity and sophistication of their architect, with elegant details and varied patterns of brick and stone. These patterns and details will connect the buildings with the intricacies of Wu Hall and our Collegiate Gothic traditions."

Cobb said he purposely sought to enliven the architecture through two unprecedented features -- irregularly spaced wave-like undulations on the buildings' fronts that allow for larger bedrooms in upper-class suites and the narrow bands of limestone that add richness and texture to the building's brick surfaces.

Form and function, he said, are intertwined.

The five dormitories are connected below grade on the lower level, which features common spaces such as a food emporium, open seating areas, a classroom and two seminar rooms.

In designing the buildings, Cobb explained, he pursued a two-fold strategy. "First, we have seized the opportunity to extend and strengthen Princeton's rich tradition of space-shaping campus buildings -- a tradition most vividly embodied in the superb residential quadrangles designed almost a century ago by Charles Klauder and Ralph Adams Cram," Cobb said. "And second, we have introduced new design elements that together constitute a contemporary analog to the wonderfully varied eventfulness of those much-loved Collegiate Gothic buildings."

The two L-shaped Butler buildings to the west -- 1967 Hall and Dormitory A -- will have an open courtyard that faces Elm Drive. On the east side of the complex, a C-shaped structure formed by dormitories C and D and Wilf Hall encloses an amphitheater courtyard on three sides called Memorial Court. This latter courtyard not only houses a 5,000-gallon underground stormwater storage tank to collect rainwater runoff from the roofs to irrigate the landscaping, but also provides a unique gathering place. 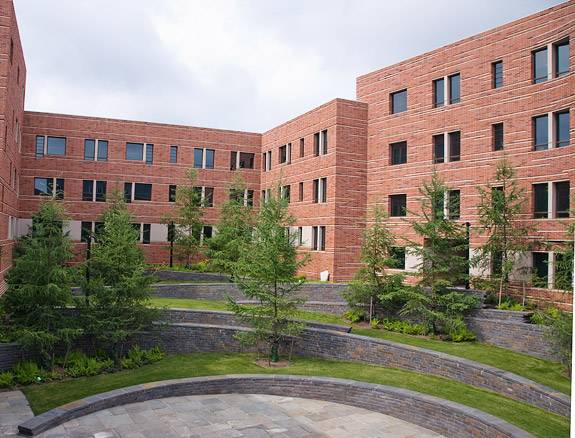 Butler Memorial Court honors the group of classes that generously supported Butler in the past and is paved with bluestone salvaged from the original buildings. The unique gathering place houses a 5,000-gallon underground stormwater storage tank to collect rainwater runoff from the roofs to irrigate the landscaping. (Photo: Brian Wilson)

Construction on the dorms began in June 2007. In addition to the new buildings in the complex, the structures that make up the college include: Wu Hall, the dining hall and social center; 1915 Hall, an existing dorm; and Bloomberg Hall, which has been an upper-class dorm. The group of classes that generously supported Butler in the past and for which previous dorms were named -- 1922, 1940, 1941 and 1942 halls -- has been honored with the naming of Memorial Court, which is paved with bluestone salvaged from the original buildings. A walkway in the complex will be named for another one of the college's former dorms, Lourie-Love, which honored Donald Lourie and George Love, members of the class of 1922. 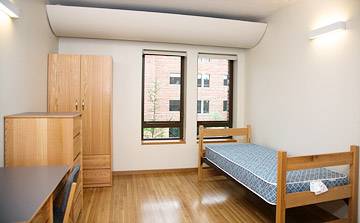 The new Butler complex is expected to house 283 in student rooms such as this one. There will be 41 single suites that consist of two single rooms with a bathroom between them; 59 quad suites with two bedrooms, common area and private bathroom to house four students each; plus six residential college adviser suites, two resident graduate student suites and one resident faculty suite. (Photo: Brian Wilson)

Alumni also have supported the green roof monitoring project. It has received funding from the High Meadows Foundation, which was co-founded by Carl Ferenbach, a 1964 Princeton graduate who is a member of the University's Board of Trustees, and his wife, Judy. Other supporters include PEI, the Community-Based Learning Initiative and the University's facilities department.

The Butler green roofs are not the first at the University. The green roof on Sherrerd Hall, completed in fall 2008, holds that distinction. There, plant-filled trays have been installed to reduce water pollution, energy costs and the emission of greenhouse gases that result from heating and cooling.

For her senior thesis, Jessica Hsu would like to help add a third green roof to campus; she would like to design a green roof for the Architecture Building. She feels lucky to be at a place that will encourage her to tackle such a project.

While some of her classmates chose summer projects near the water or in the forest, Hsu insists she likes spending time on a hot roof. "It's better to be up here," Hsu says, standing on the green roof atop Butler A. "Look at the view!"