Construction will begin this summer on the Lakeside graduate community, which will replace the Hibben and Magie apartments with new apartment buildings, townhomes, common areas and a parking structure that are designed to meet graduate students' needs and Princeton University's planning and sustainability goals.

The Regional Planning Board of Princeton approved the site plan on April 12. In June, work at the approximately 16-acre site will begin with environmental abatement and will continue through the summer and fall with the razing of the two existing buildings. The complex is expected to be completed in summer 2014 and to house up to 715 residents in 329 units.

The Hibben and Magie apartments, located south of Faculty Road and east of Alexander Street along Lake Carnegie, have a capacity of 512 residents in 192 units. They currently house 279 graduate students, some with families, as students have begun moving out. While the site is under construction, the University-owned Stanworth Apartments will serve as a housing option for graduate students.

"Lakeside is a great step forward — it will be a beautiful and much-improved community for graduate students," said Andrew Kane, director of housing and real estate services. "The features and amenities were designed with their input and their needs in mind, and we were thrilled to be able to increase the number of units on the site while moving to a neighborhood design."

The redevelopment of the Hibben-Magie site is part of Princeton's Housing Master Plan, begun in 2005 to enhance housing programs for faculty, staff and graduate students, and the Campus Plan, which guides the University's development through 2016. 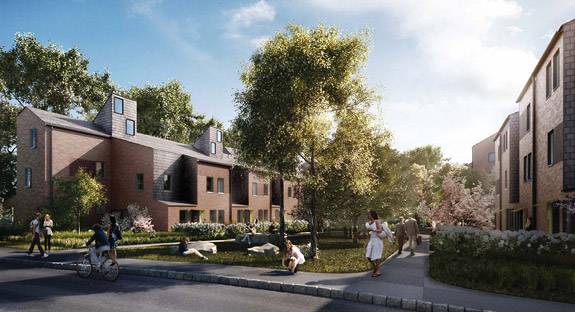 This architect's rendering shows the planned townhomes along the road, Carnegie Court, that will run through the Lakeside community. (Image courtesy of Studio Ma and dbox)

The Hibben and Magie apartments were built in the 1960s as part of efforts to meet growing demand for faculty, staff and graduate student housing. Originally, faculty and staff lived in the apartments, and graduate students later became part of the community. In preparation for the redevelopment of the Hibben-Magie site, over the last few years housing and real estate services began transitioning faculty, staff and some graduate students to other University housing options. The Hibben and Magie apartments were constructed on a site that previously had been known as Lakeside, so the new complex restores the original name of the site.

The eight-story buildings were made up of two-, three- and four-bedroom apartments. The apartments' layouts have since become outdated, and the buildings lack the amenities of contemporary housing communities.

Graduate students and Graduate School staff have been engaged throughout the process of planning the Lakeside complex, and the plans address their concerns by creating a modern set of facilities with a more intimate feel, and a sense of community similar to that felt by the residents of the Butler Apartments off Harrison Street.

"One of our most important goals was to create a project that would provide a sense of community," University Architect Ron McCoy said. "This has been achieved by designing for diversity, providing units for singles, roommates, partners, families and pets. In contrast to the existing buildings, the design maximizes the amount of units that can be entered at ground level and everything from the corridors to the common areas have been designed to support a sense of community."

The project team includes architectural firm Studio Ma of Phoenix and Princeton, and developer American Campus Communities of Austin, Texas, as well as an interior designer, a telecommunications consultant, a landscape architect, an arborist, a traffic consultant, civil and geotechnical engineers, several sustainability and environmental consultants, and two construction companies.

Among the community's specific elements will be: 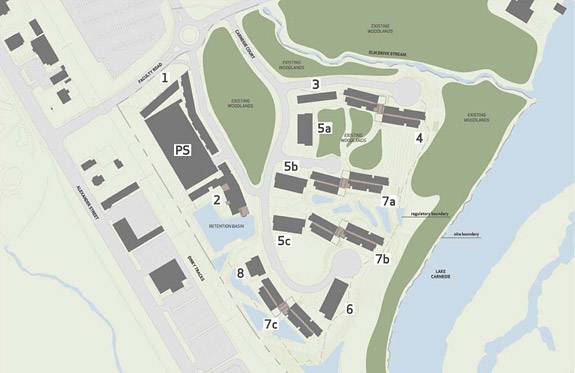 The Lakeside graduate community will be served by two entrances along Faculty Road, and will include a parking garage (labeled PS), a building with a commons area (building 2), apartments (on the upper floors of building 2, along with buildings 4, 7a, 7b and 7c) and townhomes (in building 1, 3, 5a, 5b, 5c, 6 and 8, and parts of building 2). (Image courtesy of Studio Ma)

The larger townhomes and apartments reflect many students' willingness, for affordability's sake, to share common living space if they have their own bedrooms and bathrooms. The smaller units are designed for students who wish to have fewer or no roommates, or for couples and small families.

The buildings will have brick and clay tile shingle facades, and the layout of the buildings creates several courtyards within the complex. In keeping with the neighborhood-versus-high-rise design, the apartment buildings' primary entry is through a central lobby and the buildings have short corridors with windows at each end, with views to the woods and Lake Carnegie.

"On the one hand it is very respectful of the principles of planning, organization and composition that one would find in our historic Collegiate Gothic dormitories," McCoy said. "But the buildings are also designed with contemporary sensibilities with respect to materials and surfaces. In some ways this will be similar to the new Butler College complex, a contemporary building that is based on lessons learned from the historic campus."

The buildings will have a lower profile than the current eight-story buildings, with taller buildings situated on lower portions of the site. To maintain the park-like character of the site, much of the existing woodlands will be preserved. The plans also improve the view of Lake Carnegie, as buildings are oriented perpendicular to the lake, rather than parallel to it. 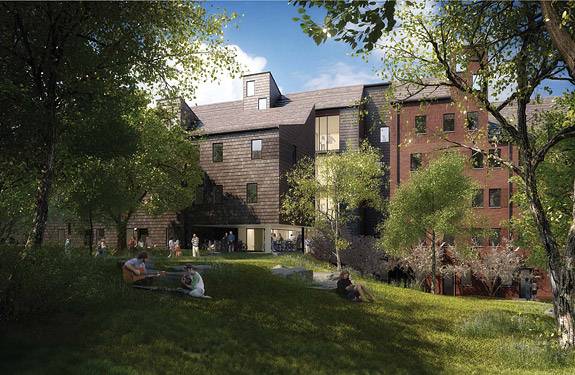 The Lakeside apartments buildings, shown here, will be between four and five stories tall, with increased access at ground level and courtyards between most buildings. (Image courtesy of Studio Ma and dbox)

The project has been planned to achieve campus sustainability standards. The University will seek LEED silver certification, a standard established by the U.S. Green Building Council, for the buildings. The new buildings will be constructed on the footprint of the original buildings and lots, with narrower roads and a parking structure, which reduces the paved surface area and helps provide onsite stormwater management. The orientation of the buildings and a geothermal heating and cooling system will promote natural energy use and energy savings. Energy Star appliances will also help reduce energy use, and "smart" water fixtures will be installed to reduce water use.

As the Hibben-Magie site is developed, graduate students will be given the option of living in the Stanworth Apartments, which is located along Route 206/Bayard Lane and has historically been used for faculty and staff housing.

"We've been helping graduate students to find appropriate housing alternatives as the Housing Plan progresses," Kane said. "We're fortunate to have the Stanworth Apartments available for graduate students while the Lakeside units are being constructed."

The University's goal is to continue to house 70 percent of its approximately 2,600 graduate students in University-operated housing.