Interspersed among Princeton University's historic buildings and grounds are major construction and renovation projects that are gradually changing the appearance of the campus. Most of the projects are based on the University's 10-year Campus Plan, which runs through 2016.

Updates about many of the projects are posted to the Major Projects section of the Facilities website. Information on construction impacts, such as disruptions to traffic, crosswalks and parking, may be found on the Facilities website, along with a map (.pdf) of where work is being done. Updates on the following structures were provided by the Facilities Organization. 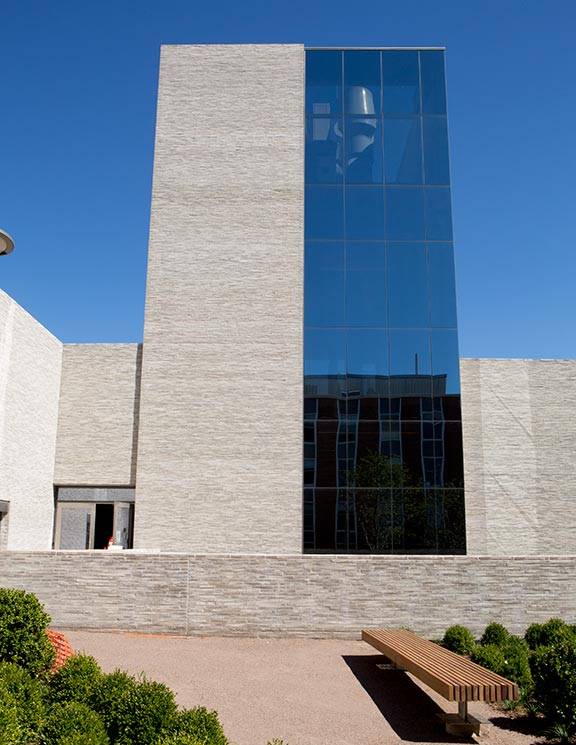 Located at the intersection of Olden Street and Prospect Avenue, the new Andlinger Center for Energy and the Environment weaves together laboratory, teaching and office space with a network of gardens in a park-like setting. (Photo by Denise Applewhite, Office of Communications)

Andlinger Center for Energy and the Environment: The construction of the Andlinger Center is almost complete and due to open in late fall. The new building, which holds lecture and laboratory classrooms, office space, a lecture hall, conference rooms, and research labs, connects to the Engineering Quadrangle on its north side and Bowen Hall to the east.

Arts and Transit Project: The Transit portion of the Arts and Transit Project has been completed. This includes the new, modern New Jersey Transit Dinky Station, Wawa convenience store, landscape and parking. A new road has been laid to connect Alexander Street to the north side of the West Garage and to campus, allowing vehicles to enter and exit on the north side of the parking garage in addition to the southern entry and exit.

A nearby bicycle parking shelter has been added. Structural work will continue through the end of the year. The café will be ready by the end of this year for the selected vendor to start work to customize the building. Work on the restaurant addition and renovation has started with the projected completion in 2016. The architect for the station, Wawa, café and restaurant is Rick Joy Architects of Tucson, Arizona. 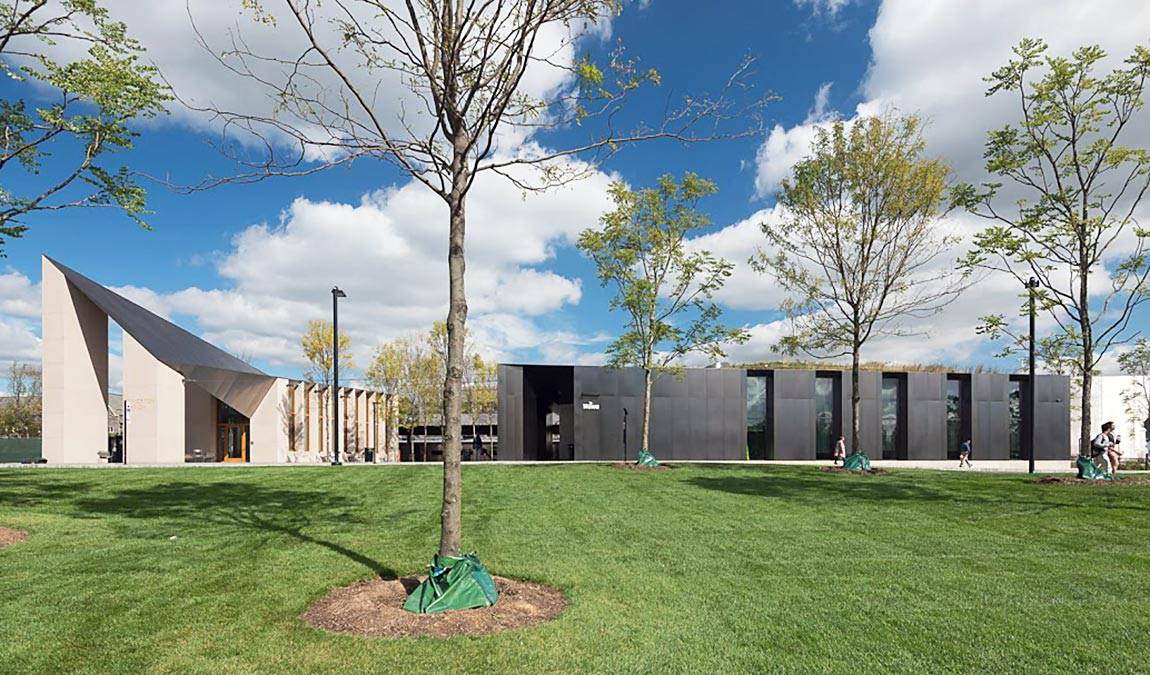 Work continues on the site's three arts building with the concrete and steel structures being constructed. The arts buildings, designed by Steven Holl Architects, will provide performance, rehearsal, teaching studio and office space for the Lewis Center for the Arts and the Department of Music. They are scheduled to be completed by fall 2017. 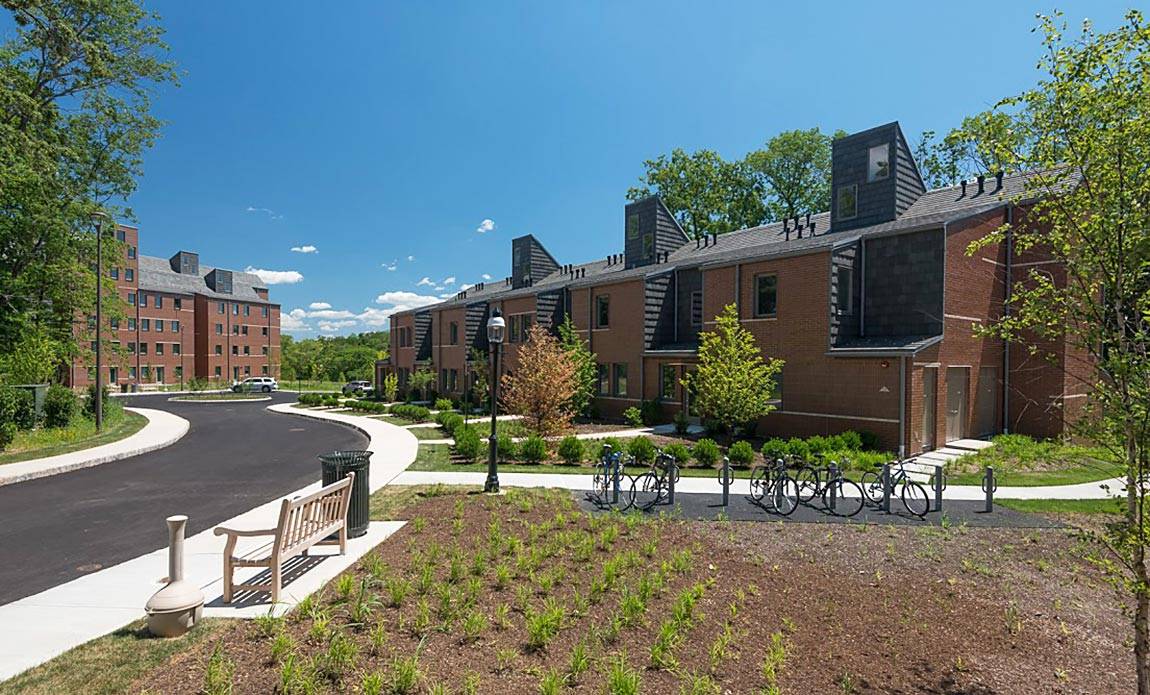 This photo shows examples of townhomes and apartments on Hibben-Magie Road in the Lakeside Apartments. (Photo by Christopher Lillja, Facilities Organization)

Lakeside Graduate Housing: With a capacity for 715 residents, Lakeside Graduate Housing with its 255 apartments and 74 townhouse units was completed before the summer and opened on June 1. The housing units range from one to four bedrooms, and furnished units are available. Located off Faculty Road with views of Lake Carnegie, the complex includes a fitness center and patio for barbecuing, as well as a parking garage with more than 400 spaces for residents. Lakeside has been designed to meet LEED Silver standards. The project team includes the architectural firm Studio Ma of Phoenix and Princeton, and developer American Campus Communities of Austin, Texas. 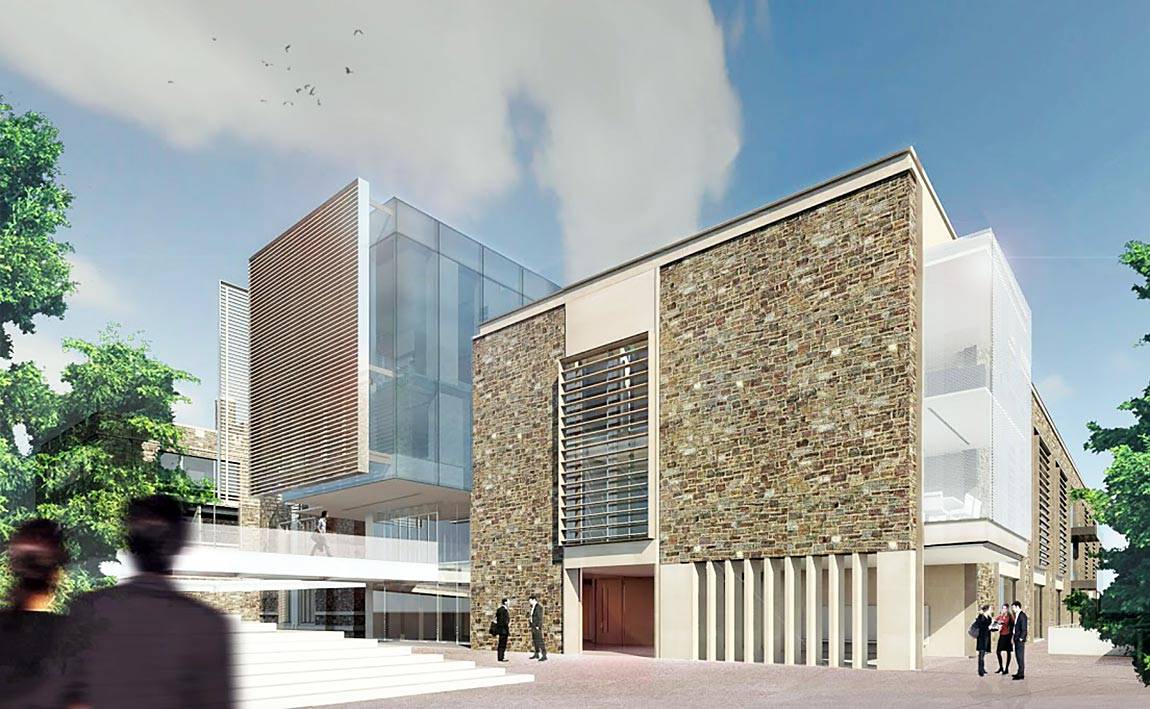 20 Washington: The 20 Washington Road renovation project began last spring with interior demolition in the 200,000-square-foot former Frick Chemistry Laboratory. Over the summer work continued on the exterior of the building, with window replacement and masonry repairs alongside interior renovations. The project will provide new building systems, lighting, finishes and furniture, two atrium spaces and a new entrance that connects to Scudder Plaza. Completion is expected in fall 2016.

Built in 1929 in the Collegiate Gothic style, 20 Washington Road will be repurposed to centralize economics and international program offices across campus. The architect for the project is Kuwabara Payne McKenna Blumberg Architects of Toronto. 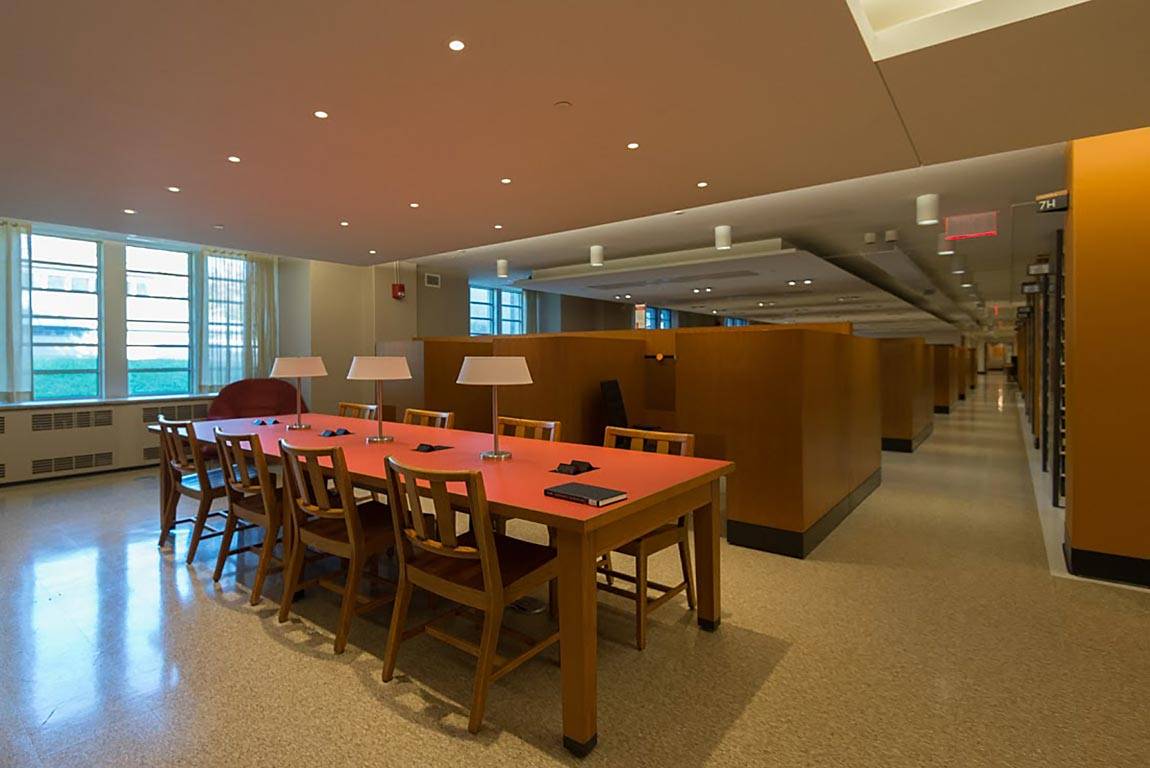 This is a new reading area and study carrels on the north side of Firestone Library A Level. (Photo by Christopher Lillja, Facilities Organization)

Firestone Library: The phased renovation of Firestone Library includes the completion of the storage areas for Rare Books and Special Collections on the B and C levels and reading rooms on the eastern side of the A and B levels. Project completion is expected in late 2018. The architects for the project are Frederick Fisher and Partners Architects of Los Angeles and Shepley Bulfinch Richardson and Abbott of Boston.

Merwick Stanworth: The first phase of the Merwick Stanworth complex — a townhouse and apartment community for faculty and staff, with some affordable housing units for local residents — was completed in June, and tenants have begun moving into the 128 units.

The second phase of work on Stanworth has begun with demolition of the old buildings. Construction of the 198 units in this phase is expected to be finished in fall 2016. The complex, designed by Torti Gallas and Partners of Silver Spring, Maryland, is located along Route 206/Bayard Lane.

Murray-Dodge Hall: The Office of Religious Life moved to Green Hall this academic year while Murray-Dodge Hall is renovated to provide accessibility and life-safety improvements. The hall is an interfaith space that was built in the 1880s and houses many of the Office of Religious Life's programs and staff offices. The projected completion date of the renovations is early 2017.

Butler Tract: The Butler Tract buildings, bounded by Harrison Street, Hartley Avenue and Sycamore Road, were constructed in 1947 as temporary housing for returning military personnel. Over the years, they have been modestly upgraded, and some new units were built in the 1980s. Until spring 2015, all units were being used for graduate student housing. Butler Tract was vacated this summer and demolition of the units has started.

Architectural Laboratory: The Architectural Laboratory, used for tectonic testing of structures and for large-scale fabrications, as well as the teaching of construction methods, sits on approximately one acre of Princeton University-owned property, south of Frick Chemistry Building. A replacement building has been planned on the current location. Demolition work is expected to begin soon.

Childcare center: The new center will serve around 150 to 180 children from infants to age 5 and it will be available to children of University faculty, staff and graduate students. The building at 171 Broadmead that houses the center will be closed when the new center opens. Utility relocation work is expected to begin in mid-November and the building construction will start in the spring.