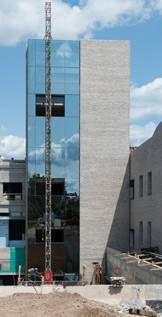 The Andlinger Center for Energy and the Environment, seen here from the Olden Street side of the three-building complex, is in its final year of construction.

Scattered among the peaceful wooded paths across the Princeton campus, bulldozers and scaffolding hint at the many construction projects underway to support key initiatives such as sustainability, arts education, international experiences and housing.

The projects below are in line with the University's 10-year Campus Plan, which guides development through 2016. In addition, dozens of smaller building renovation and landscaping projects are completed on campus each year.

Andlinger Center for Energy and the Environment: As construction of the Andlinger Center enters its final year, activities on site include work on the brick and glass exterior; the installation of utilities and mechanical, plumbing and electrical services; and carpentry. When completed, the new building will hold lecture and laboratory classrooms, office space, a lecture hall, conference rooms and research labs and will connect to the Engineering Quadrangle on its north side and Bowen Hall to the east. Even during construction, the center has been used as a teaching tool for Princeton engineering students. The 129,000-square-foot center, scheduled to be completed by fall 2015, has been designed to meet LEED Silver standards under the Leadership in Energy and Environmental Design rating system developed by the U.S. Green Building Council. Tod Williams Billie Tsien Architects of New York City, co-led by alumnus Tod Williams, designed the project. 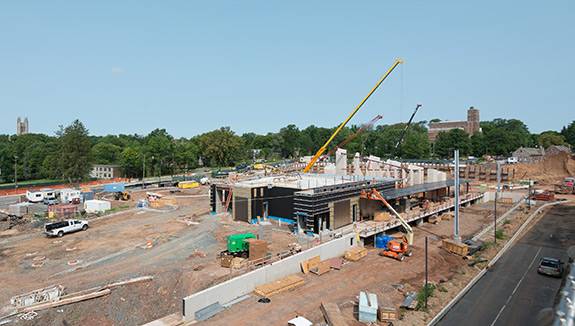 Arts and Transit Project: By the end of this year, the transit portion of the Arts and Transit Project will be completed. This includes the new, modern NJ TRANSIT Dinky Station, Wawa convenience store, landscape and parking. A new road will connect Alexander Street to the north side of the West Garage and to campus, allowing vehicles to enter and exit on the north side of the parking garage in addition to the existing southern entry and exit. A nearby bicycle parking shelter will be finished at the same time. During the 2014-15 academic year, the former north Dinky station building will be converted to a café. After that, the former southern Dinky station building will be expanded and converted into a restaurant. The architect for the station, Wawa, café and restaurant is Rick Joy Architects of Tucson, Arizona.

Work also began this winter on the site's three arts buildings, with excavation, site utilities, footings and foundations, and waterproofing continuing through the summer. Drilling for the geothermal well field, one of the several sustainable elements of the project, began in August. Over the next year, the concrete and steel structures will be constructed. The arts buildings, designed by Steven Holl Architects, will provide performance, rehearsal, teaching studio and office space for the Lewis Center for the Arts and the Department of Music; they are scheduled to be completed by fall 2017.

Lakeside Graduate Housing, a mix of townhouses and apartment buildings (such as the one above), is nearing completion. The community will include indoor amenities such as a fitness center and computer cluster, and outdoor amenities such as basketball and volleyball courts and a parking garage. (Photo by Christopher Lillja, Facilities Organization)

Lakeside Graduate Housing: With a capacity for 715 residents, Lakeside Graduate Housing will have 255 apartments and 74 townhouse units when it is completed later this year. The housing units range from one to four bedrooms, and furnished units are available. Located off Faculty Road with views of Lake Carnegie, the complex also includes amenities such as a fitness center and patio for barbecuing, as well as a parking garage with more than 400 spaces for residents. Lakeside has been designed to meet LEED Silver standards. The project team includes the architectural firm Studio Ma of Phoenix and Princeton, and developer American Campus Communities of Austin, Texas. 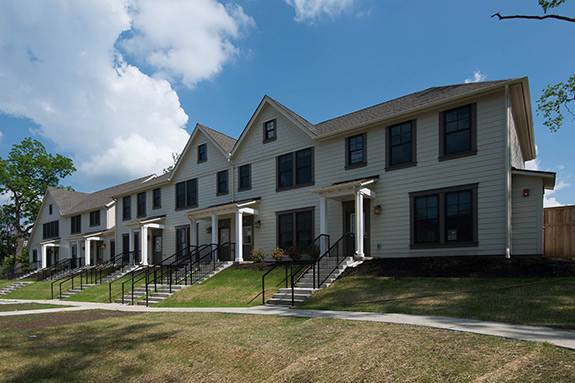 The first phase of the faculty-staff complex Merwick Stanworth is complete, and families have begun moving into the townhouses (above) and apartments. (Photo by Christopher Lillja, Facilities Organization)

Merwick Stanworth: The first phase of the Merwick Stanworth complex — a townhouse and apartment community for faculty and staff, with some affordable housing units for local residents — was completed in June, and tenants have begun moving into the 128 units. American Campus Communities will begin the second phase in early 2015 with demolition of the existing Stanworth Apartment units, and construction on the 198 remaining units is expected to be finished in 2016. The complex, designed by Torti Gallas and Partners of Silver Spring, Maryland, is located along Route 206/Bayard Lane.

Olden House: Completed in the spring, Olden House is an 11,779-square-foot apartment building for visiting scholars. The three-story facility holds a mix of 18 studios and one-bedroom units, and its modern façade is composed of cedar and white painted brick. The building was designed by architect J. Robert Hillier of Princeton, an alumnus and a visiting lecturer in architecture.

Bedford Field Team Building: The 2,100-square-foot team room building at Bedford Field was completed during fall 2013. The blackened wood-clad building with its orange entrance alcove is the focal point at the southern end of the concourse created between the Class of 1952 Stadium grandstands and the new 1,500-seat grandstands for Bedford Field. The building has two team rooms that will be home to Princeton's men's and women's lacrosse teams, and the women's field hockey team. Along with the two team rooms, the building has restroom facilities for both men and women, and a trainer's room. The building was designed by Marble Fairbanks Architects of New York City. 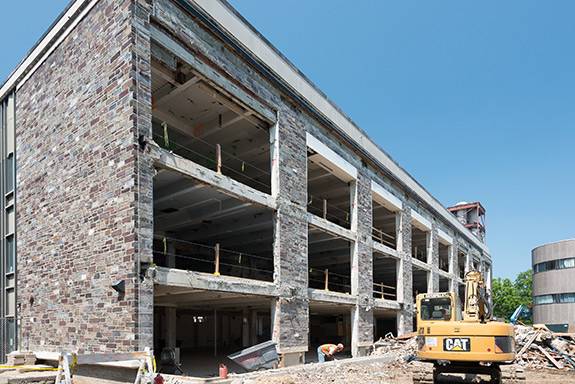 As part of the renovation of 20 Washington Road, construction crews have removed the 1984 building addition and are restoring the eastern original stone façade of the building. (Photo by Christopher Lillja, Facilities Organization)

20 Washington: The 20 Washington Road renovation project commenced this spring with interior demolition in the 200,000-square-foot former Frick Chemistry Laboratory. The building, which was built in 1929 in the Collegiate Gothic style, will be repurposed to centralize economics and international offices across campus. This summer, construction crews removed the east concrete façade, which was a 1984 addition, and the bridge connection to Hoyt Laboratory. They also began working on three new rooftop pavilions. The foundation work for a new south atrium will start in the fall, along with the installation of wall and ceiling framing and mechanical and electrical systems throughout the building. Designed to meet LEED Gold standards, the project is scheduled to open in fall 2016. The architect for the project is Kuwabara Payne McKenna Blumberg Architects of Toronto. 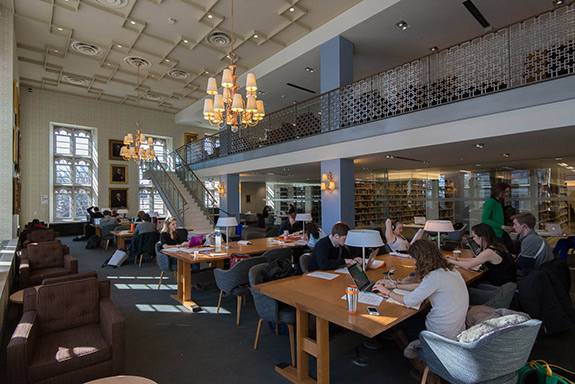 Firestone Library has a newly restored two-story reading room on the third floor, as part of the renovation's goal of improving reader and study spaces. (Photo by Christopher Lillja, Facilities Organization)

Firestone Library: As a product of the phased renovation of Firestone Library, now in its fifth year, students have a new light-filled reading room on the building's top floor. Also, the University librarian and administrative staff have moved into new offices on the second floor, completing renovation of upper floors of the building. In the coming year, work on the A, B and C Floors will result in graduate study rooms, student carrels, library classrooms, a public reading room and storage for the Department of Rare Books and Special Collections. New book stacks and reader seating will be constructed on all floors throughout the renovation, to be completed in fall 2018. The architects for the project are Frederick Fisher and Partners Architects of Los Angeles and Shepley Bulfinch Richardson and Abbott of Boston. 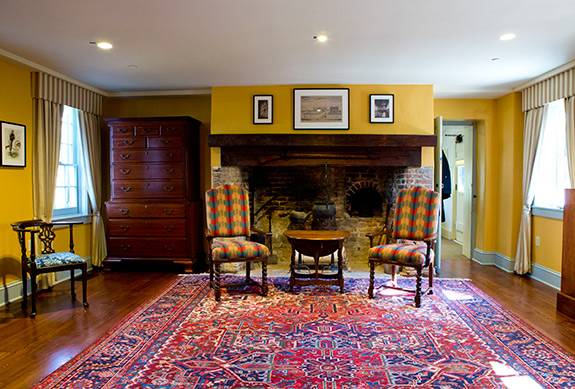 Home of the Alumni Association, Maclean House is newly restored with modern utility systems, refreshed interiors and vintage art, as seen in the hearth room above. (Photo by Denise Applewhite, Office of Communications)

Maclean House: In June 2013, workers began renovations to the 10,000-square-foot structure, which was built in 1756 as the Princeton president's house. In April, the staff of the Alumni Association returned to a restored Maclean House with a refreshed interior color palette, coordinated new furnishings and vintage art. In addition, new roofing, brick chimneys, heating, ventilation and air conditioning (HVAC), plumbing and fire alarm/protection systems were installed during the 10-month renovation. The project was designed by Mills + Schnoering Architects of Princeton, whose principals include alumnus Michael Mills. 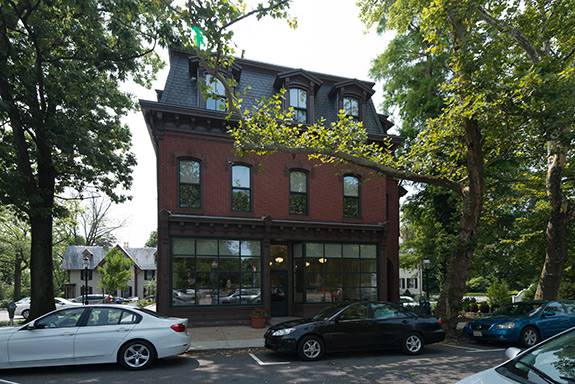 The Office of Community and Regional Affairs is located on the ground floor at 4 Mercer St., a structure whose restoration also included adding faculty apartments on the upper floors. (Photo by Christopher Lillja, Facilities Organization)

4 Mercer St.: Earlier this year, construction finished on this historic property, built in 1878 and formerly home of the Town Topics newspaper. The building has three faculty housing units on the upper floors and the University's Office of Community and Regional Affairs occupies the ground floor, distinguished by high ceilings and large windows looking onto Nassau Street. The building's brick exterior was restored, and the 8,200-square-foot interior features new utility systems and finishes. Where an addition was removed from the back of the building, a stairway has been added. The project team includes HMR Architects of Princeton, whose partners include alumnus Philetus Holt III.

Eno Hall: The majority of the basement of Eno Hall is being renovated, resulting in upgraded research laboratories for the Department of Ecology and Evolutionary Biology. The project, which began in June 2013, includes the development of new controlled environment behavioral study spaces for fish and insects. The project scope also included new mechanical systems related to the research spaces, and other code-related improvements. Work also extended onto the first and second floors, where new HVAC systems, corridor ceilings and lighting, flooring and painting were done. The building also received a new single-person elevator and modifications to its north entrance to make the building more accessible. The majority of the construction activities were completed in February, with minor items continuing through the spring and summer. The labs will be ready for research use by fall 2014. Nalls Architecture of Narberth, Pennsylvania, designed the project.

Jadwin Hall: The phased construction of Jadwin Hall — which involved replacing HVAC, lighting and windows in the home of the physics department — was completed this spring after nearly five years. The new HVAC systems need to be balanced while the systems are monitored and tuned with each season, so that work is ongoing, as is testing of alternative heating and cooling systems for highly sensitive labs in the high bay area. To match the building's new aesthetic, the main lobby is being updated. A new mail and information center was designed and constructed earlier this year, and lobby furniture selection is in progress. MGA Partners of Philadelphia served as the project architect.